You Have Lost the Game of Thrones. Play Again? 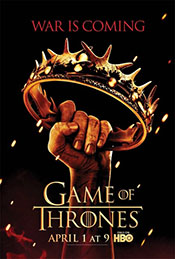 I'm 3/4 of the way through third season of Game of Thrones -- I don't have HBO, so I have to wait for the DVD releases of the show to catch up each year. I've already had the end of the season spoiled for me, but that was long, long ago by someone who was reading the books (fear not, this post will be pretty much spoiler-free), as well as many details later in the series, but I don't feel like knowing what's going to happen ruins my enjoyment of the series.

Game of Thrones is one of the best fantasy series I've seen. It has high production values, great acting, and is just earnest enough about chronicles the events of the novel series without being slavish to the content (for an example of being too oriented to the original content of novels just see the first two Harry Potter movies or the Lord of the Rings extended editions... and The Hobbit is even worse). The TV series takes the content of A Song of Fire and Ice, adapts all the best bits, but does so at a brisk pace that enables the content to shine in an episodic media.

But this isn't a review of the series. This column is about a specific notion I've had while watching the show. Because, here's the thing about Game of Thrones: everybody dies. If you like a character, you can be sure they'll die. If you respect their code of honor, or think that their actions could make them a good leader, or that maybe, in the right light, they might be right in a particular instance (no matter what other terrible things they've done), expect them to die within a few episodes. Every body is eventually going to die on the series.

And this isn't just about House Stark -- the (arguable) protagonists of the series, House Stark does get the brunt of the punishment. The family is broken up early in the first season, and then they all suffer in a variety of ways. Emotional death leads to physical death for just about every character in the series (not just House Stark). Major roles, minor roles, characters you only noticed in the background once in a while and just got attached to due to the performance of the actor (and not because they had any major storyline). They're all going to die.

Now, if you're a villain, you get a little breathing room. You'll be around for a while (probably), but make no mistake: eventually you're going to die, too. There are no winners or losers in the game of thrones (no matter what some characters may think). Everyone is eventually going to die because that's the only realistic outcome when you have seven (well, really, upwards of fifteen) factions all warring over the same shitty continent.

The only way I can see this series ending (seven seasons or so into its run) is that somehow someone invents a nuclear bomb and melts all of Westeros down to glass. Because, seriously, everyone is going to die.