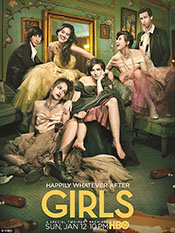 In an attempt to find something to watch, I tried Girls. I made it two episodes in before I had to stop -- I hated all the characters, especially the main character. She's entitled, spoiled, and can't tell that the stuff coming out of her mouth isn't as smart as she thinks it is (which I get is the point, but that doesn't mean I have to like it or want to watch the show).

That said, one amusing thought occurred to me during the two episodes I watched. The main character, Hanna, has a shitty boyfriend, who's name I can't remember (or be bothered to look up) so I just took to calling him Doucheboy. Doucheboy is an irredeemable asshole who uses the character for sex when he's not insulting her about her weight, her intelligence, and just about everything else he can (although, as I said, Hanna is awful too, so they're kind of made for each other).

The thing is, Doucheboy is going to be the villain of the next Star Wars movie. Of course I mean that the actor will be in that film, but I was amused to think of a crossover between Girls and Star Wars where Doucheboy repeatedly insults Leia's daughter before having sex with her, and then sends her to the Empire because she thinks she can't do any better. It became a game in my head to think about other franchises and the shitty things he'd do during a crossover.