The Spirit of the Game

It's interesting that in all the time we've spent on the DiscworldAt first blush, the Discworld series seems like just a parody of fantasy literature. Dig into any of the books, though, and you'll find deep and funny tales of a world just slightly off from our own. A world that, yes, is a flat disc carried through space on the backs of four elephants that, in turn, ride on the back of a giant space turtle. (37 books and counting with today's entry) we've never had a single book dedicated just to the Wizards without Rincewind in the lead. Yes, we've had plenty of Rincewind books (starting with the first novel in the whole series, The Colour of Magic, and we've had them show up prominently in other books in the series, such as Reaper Man and Lords and Ladies, but it's taken 37 novels for us to get a book just about them. 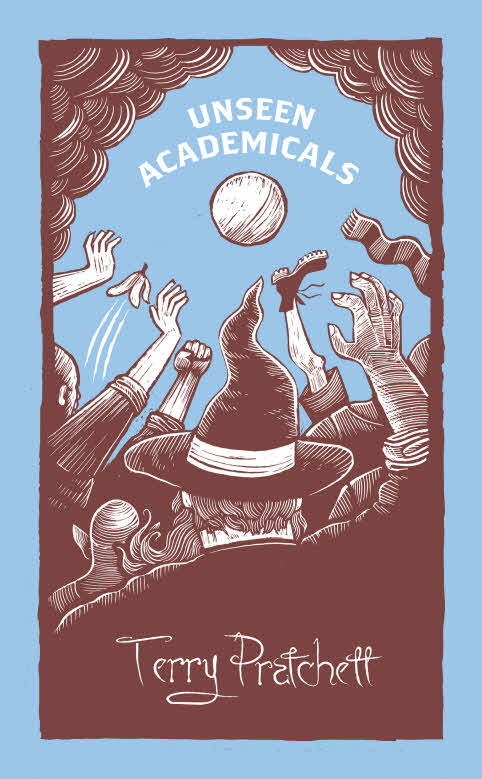 Although I guess, in a way, this isn't a book just about the Wizards. It takes place at their university, yes, and they feature prominently in the story, but it's really a story about a goblin (who isn't really a goblin) named Nutt. He's a hard worker, toiling away at the vats under the university, dribbling away at candles and following whatever other pursuits flit across his fancy (and there are so many). He's the main character of the story and it's his growth and potential in the novel, and not really the Wizards, that the book is most concerned with.

When we meet Nutt he's just a worker in the vats. He has a friend, Trev Likely (son of the famous footballer Dave Likely), a kid that basically just slumps around the vats and does very little. The two of them occasionally sneak into the Night Kitchen upstairs, a place filled with warm pies cooked by Trev's friend (more or less) Glenda, and Glenda runs the Night Kitchen as her second home. Also working in the Night Kitchen is Juliet, Glenda's friend, and the most gorgeous woman to ever walk the Disc. These four will soon go on adventure involve truth, justice, and football.

Football, so you know, is illegal in Ankh-Morpork; it's a violent sport and the Patrician doesn't like it. But, despite this law, the game is still played, it's just done so in back alleys away from the eyes of the Watch. Hoping for a change, something to improve the city and make everything a little safer, the Patrician allows football to be played, so long as its done by more civilized rules. And to show his faith in the sport he ropes the Wizards into putting up their own team for the game for an exhibition match. Now the Wizards just have to figure out how to play. Thankfully they have a secret weapon, Nutt, who has a keen intellect and a grasp for complicate by effective strategy. If the Wizards win it'll be a great day for football, the city, and the Patrician. No one wants to see what happens if the Wizards lose.

In its construction Unseen Academicals is one of the denser books in the series. There are a lot of plot lines going on, a lot of different character interactions to get through, all of it leading up to the big football match which comes as something of a second climax for the whole series. And to get there we have to wade through so much character history and setup. Not that, for this book, that's such a bad thing as there are a ton of great characters in the novel.

First and foremost, of course, is Nutt. Taught that he was a goblin, Nutt is actually an orc and orcs are feared creatures. Out in Uberwald, the orcs were a man-made army (supposedly created from goblins, who are otherwise quite docile creatures) that swept across the country under the control of the Evil Emperor. But then, when they were defeated, all of the civilizations decided to wipe orcs away completely. Pockets of them still existed, though, living in the wilderness. Nutt was discovered by Lady Margolotta, the vampire "queen" of Uberwald, and he was raised and trained and taught and soon she realized there was quite the intellect in the head of Nutt. So she sent him to live at Unseen University where he could have a job and find worth and, maybe, turn the sentiment of civilization away from killing all the orcs.

Nutt is a great character, erudite and funny, with odd little habits that make the character feel very lived in. He basically takes over what would normally have been a Rincewind part of the Wizard story, the main plot that the Wizards all run along side. But where Rincewind was a coward always looking to dodge responsibility, Nutt heads for it, relishing in challenges while he strives to find worth in his life. We had a lot of good and bad characters in the course of the series, and plenty more that wanted to avoid their destinies, but Nutt is one of only two lead characters I can think of who truly embraced their destiny (the other being Tiffany Aching), knowing that the best way to grow was to find your own worth, done your own way.

Nutt is such a strong character, in point of fact, that the rest of the characters aren't as interesting by comparison. Glenda is a decent person, but (as with Juliet) she's more often the butt of jokes (especially about her weight), with the author constantly undercutting her even when she's trying to find her own destiny. Juliet, honestly, gets the same treatment, with the author constantly talking up her beauty and grace while putting down her lack of intelligence. It's an issue I've had throughout the series, that Pratchett treats his male and female characters differently, and that's on full effect here. Glenda is supposed to be Nutt's equal in the story, two sides of a relationship pairing, but the book treats Nutt with awe and craps on Glenda. Trev and Juliet are a similar pairing, but Trev is a hallowed hero while Juliet is a dumb (if graceful) bimbo.

That's not to say that Pratchett doesn't try to give the ladies things to do for their own destinies. Glenda has to find herself, to realize she can elevate herself out of the simple subsistence she's been living in for years and use her talents for something more. Meanwhile Glenda also wants to drag Juliet down, even when Jools finds the perfect job modeling micromail for a dwarven fashion company. These are solid plot lines for these characters, and often Pratchett handles the growth these characters are going through very well... but then has has to cut them down despite never doing that to the men. I just don't get it.

And maybe this is a minor nitpick but I don't get how football in this book, played on backstreets with a wooden lump the guys call a ball, ever came to be. The game is civilized by the Wizards when the spontaneously come up with a new ball for the gents to use, an air-filled leather bladder that goes gloing! when it bounces. Within the context of just this one book it works, but if you go back and read Jingo you'll find Capt. Carrot playing a game of football with an air-filled bladder/ball years before. This is the kind of continuity error I don't expect in the series and it bothers me.

Not everything about Unseen Academicals works, essentially, but when the novel focuses on Nutt it's thrilling. I really enjoy this character and wish we got more of him down the road. As my refrain has gone for the last few books, knowing that the end is coming for this series (because of the death of Pratchett) makes a novel like this bittersweet. I want to see more of Nutt, to learn more about the orcs, to see that species become a larger group on the Disc, but at this point that will simple never happen and it's sad.