A Rift In Time Saves Nine

While Wyrd Sisters marked a turning point for the DiscworldAt first blush, the Discworld series seems like just a parody of fantasy literature. Dig into any of the books, though, and you'll find deep and funny tales of a world just slightly off from our own. A world that, yes, is a flat disc carried through space on the backs of four elephants that, in turn, ride on the back of a giant space turtle. series away from a simple barbarian high fantasy parody series into something more, it's really with Pyramids that the series truly started to evolve. This is the first book to start someone that isn't a magic user of any kind (even Death can be considered a magic creation with very specific powers); the lead, Teppic, is in fact just a human trained at the Ankh Morpork Assassins' Guild (a proper place for a highborn lad to get an education). He's also a god-king, eventually, but even when he ascends the throne and (briefly) attains god-hood, he's still human at his core and remains that way for most of the novel. He's not a barbarian, or a wizard, but some guy who has to take over a throne when his father dies. 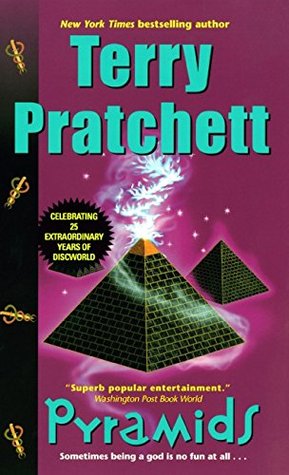 By default this gives us a very different perspective of the disc from any we've had before. Teppic, son of Pteppicymon the XXVII, doesn't want to be king of Djelibeybi. He takes the throne because he must but he's constantly looking for a way out, some way to at least shove off the trappings of the office and get his people to treat him like a man, not a god-king. This never goes well for the lad, and over time he falls deeper and deeper into the disfavor of Dios, high priest of the land (and, honestly, the real ruler of Djelibeybi). The two butt heads regularly and it's clear that Teppic is but a puppet on the throne, a warm body to fill a golden mask (Djelibeybi's version of a crown) and occasionally say some words that will be ignored. Things about to change, though, and it's all due to the pyramids.

Djelibeybi has built pyramids for centuries, bankrupting the empire with the construction costs. The pyramids are magical buildings, storing and releasing time as nightly flares, so when Teppic elects to build the biggest pyramid ever for his late father, this leads to some serious issues. Namely, the pyramid is too big and might just (read: will) distort the very fabric of reality once it nears completion. Teppic is going to have to fight against Dios and the other priests if he'll have any chance of saving his kingdom from this building apocalypse.

In the previous books we essentially bounced between two areas: Lancre (home of the witches) and Ankh Morpork (largest city on the disc and home to just about everyone else we know of). Although the book starts off in the city, establishing a little more about the guilds of the city (specifically the Assassins' Guild), but most of the book is focused on Djelibeybi and its two neighbors, the Grecian Ephebe (of wisdom and philosophy) and the Spartan-esque Tsort (a militarized culture). Pyramids explores these cultures, giving us a better sense of a whole new region of the world and the people living within it.

That said, it's hard to argue that this new perspective is all that necessary. While Ephebe shows up in a couple of future books, Djelibeybi is a one-off culture that has little influence on the series moving forward. It's hard to know what Pratchett's original plans for the region might have been, but whatever they were the author certainly didn't do anything with the pyramid-loving kingdom moving forward.

That's a problem especially for the lead character, as Teppic seems like a lad at the start of his life, ready for new adventures moving forward. He's not that interesting a character here only because much of his time as king is spent without a whole lot of agency (by the designs of Dios). Once he finally rises up and takes his power back, the book is nearly over. If further books could have come out to explore his adventures out on the sands, that might have helped Pyramids feel like a greater influence on the series. As it stands, the book is easily forgotten because its land, and its lead character, don't have any influence moving forward.

Another issues I have with the book is in its treatment of the only major female character, Ptraci. A handmaiden to the king (read: concubine), Ptraci and Teppic never get together as lovers (or even love interests) as Teppic is too shy to do anything with her skilled advances. This turns out to be a good thing as it turns out Ptraci is also his sister (which Dios and the other priests wouldn't have had a problem with as marrying within the family to keep the blood pure is a tradition in the kingdom). There's some comedy to be had from the awkwardness of the situation, but the book doesn't really do very much with this setup except give Teppic an easy out, late in the book, from being king.

The real problem is that Ptraci is never a real character. She's pretty, and the butt of a few jokes, but she's never given any of her own agency. Hell, even at the end, once she becomes queen of Djelibeybi it's only because Teppic shoves it off on her. He gets to make a decision about if he wants to be king or not, but she just has to accept whatever he says. She's a means to an end, not her own person.

Again, this could have been alleviated with a sequel novel that better explored the characters, or if this book had been longer to give more time to the leads. As it stands, neither the hero nor his (not) love interest get to be all that interesting, and the hero basically shoves all responsibility off on the pretty girl simply because he can. Not a great place for the protagonist to be at by the end of his story.

By the time you reach the end of Pyramids you'll probably be annoyed by the novel (if you care about it at all). It has a lot of interesting ideas at play 9such as the pyramids being stored-time structures or the fact that the mummy residing within them are forced to roam in the dark as eternal ghosts due to all that time built up) but it never really explores that in enough depth. Worse, the characters of the book are treated with the same shallow perspective as the setting of the story. This book could have been good if it had at least another 100 pages to it (or a second book later on to flesh everything out). While it's good to see new settings and ideas at play in the series, it's hard to view Pyramids as anything other than a missed opportunity.