The Witches have always been one of the key pillars of the DiscworldAt first blush, the Discworld series seems like just a parody of fantasy literature. Dig into any of the books, though, and you'll find deep and funny tales of a world just slightly off from our own. A world that, yes, is a flat disc carried through space on the backs of four elephants that, in turn, ride on the back of a giant space turtle. series. First introduced all the way back in the third book (and second complete story in the series), Equal Rites, Pratchett regularly revisited Granny Weatherwax and her collection of witches and associates. In later novels, the focus shifted off of Granny (and Nanny Ogg, and Magrat) over to the girl that seemed to be Granny's natural successor, Tiffany Aching. First introduced in The Wee Free Men (the second Young Adult novel in the Discworld series), Tiffany became the sole focus on the Witches books. 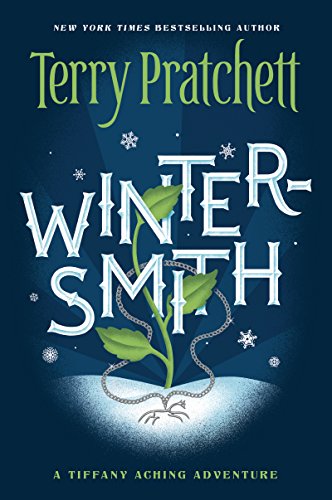 I do have to wonder how fans of the Witches felt about this change in perspective for the series. I will admit I haven't always been the biggest fan of the Witches books, not really jiving with the perspective those books took with their heroines, but I really enjoy the Tiffany series of novels. If I were more attached to the original Witches would this new series of novels annoy me or would I have liked Tiffany still because she presented a new perspective?

And she does present a new perspective because she's not a trained witch; she's just a sheep girl who sees the world as it truly is and realizes that sometimes she's the only person, young as she is, that can take on the threats in her part of the world. She'd already fought the Queen of the Fairies (in her fist novel), and then taken on a malevolent, incorporeal force (the Hiver), in A Hat Full of Sky. By that point she'd earned her stripes and was capable of being a proper witch (in training).

Having such a young character become a witch adds a lot to our knowledge of what it means to be a witch. In previous books we only really knew witches after they'd already found their calling. The closest we came to an apprentice witch before this was Eskarina Smith in Equal Rites, and even then she was more of an apprentice wizard that had to act as a witch. A young girl first finding herself, and then finding her power, was a perspective this series needed and helped the make the whole concept of witchcraft on the Disc feel knew and special.

In her third book, Wintersmith, Tiffany ends up in a new kind of trouble, trouble that once again pushes the growth of her character as a whole. Here, when Tiffany is taken to watch a Morris dance at the end of Summer (Morris dances usually being danced at the end of Winter to usher in Summer), Tiffany learns two things: there are two Morris dances for the two times of year, and also that no one should insert themselves into a Morris dance. As she finds out, watching the six Morris dancer spin and twirl in their complicated reel, there's a spot in the dance left open -- in the Summer dance this is taken up by a seventh dancer, but for the Winter dancer it's left empty. But Tiffany, when she jumps in, takes the place of the Summer lady and, in the process, catches the eye of the Wintersmith.

As it turns out, there are two gods (or god-like beings) that are representations of Summer and Winter: the Summer Lady and the Wintersmith. The two only meet briefly in the dance as they change places for the year, but once Tiffany takes over the spot of Summer she becomes, in Winter's eyes, the Summer Lady. Worse, she also gains some of Summer's residual power, becoming the closest things there's ever been to a physical Summer on the world, and now the Wintersmith is intrigued. Tiffany will have to fight how his amorous advances while finding a way to re-balance the seasons and set the Disc right once again.

For those that complained there wasn't enough of the classic witches in the previous Tiffany novels (the occasional cameo of Granny notwithstanding), this novel goes some way to answering those pleas from fans. Not only does Granny figure heavily in this book, helping to guide Tiffany through this new danger (as snowflakes, and even glaciers, in the shape of Tiffany start showing up across the Disc, shows of affection from the Wintersmith), but Nanny Ogg makes her own appearances as well (because when you have an amorous suitor, who else do you talk to but Nanny?). It's nice to have these to ladies in the book to add some connective continuity from old to new and to make the Tiffany Aching series feel of-a-piece with the original Witches novels.

Tiffany, though, is the star and she once again gets to use her admirable traits to get out of another stick situation. Tiffany it a really well written character, strong and tough and smart but the right amount of vulnerability that you feel like the dangers in front of her can't just be defeated like its nothing. Compared to Granny, who is always viewed as an external presence (even in her own books), someone shaded from the reader so we can never get into her head (which makes sense since Granny is always so guarded), Tiffany is an open book to us (no pun intended). In the tradition of Young Adult novels, everything is told from Tiffany's perspective, so when she struggles or has to try hard to work through a problem, we believe it. The dangers to her feel real in a way they normally don't when we're reading about Granny.

The Wintersmith is an interesting villain in concept because he's so much bigger than anything Tiffany has faced. Taking on the Queen of the Fairies was hard, yes, but that was a one-on-one match. The Hiver, too, proved a formidable foe, but in a way it was Tiffany working against herself as the immutable Hiver kept trying to invade her mind. Here, though, how does one girl fight an entire season, especially when that season sees no issue in blanketing an entire world in ice and snow to prove his love. It's like battling Pepe Le Pew if that skunk has godlike abilities. That would be a danger for anyone, let alone a young teenager.

But it's Tiffany's problem to solve, as the other witches (and the novel itself) makes clear. Tiffany caused the situation, putting herself in the dance, so she has to be the one to solve it. There's no easy outs for her, no sudden deus ex machina that she can suddenly present that solves the situation (again, unlike make of the encounters Granny had in her books). This makes the wins Tiffany racks up, including that over the Wintersmith here, feel earned. The book does give her an easy out and Tiffany is better for it.

I like the Tiffany Aching books because they treat the character fairly and never cheat the reader. He adventures, including this one here, are solid reads that never skimp or resort to trickery. Tiffany is a strong character and the books let her work out her own solutions. Wintersmith is easily the best of the set because it gives Tiffany her entire network of witches to back her up, presenting her, finally, as a proper witch, giving her the strength to take on her greatest foe yet. And then, in the end, it teaches her a valuable lesson: just because you can do something doesn't mean that you should, and if you mess it up you have to fix it. I think that's valuable for anyone to learn.