Carry On My Reaping Son

So far in the DiscworldAt first blush, the Discworld series seems like just a parody of fantasy literature. Dig into any of the books, though, and you'll find deep and funny tales of a world just slightly off from our own. A world that, yes, is a flat disc carried through space on the backs of four elephants that, in turn, ride on the back of a giant space turtle. series we've had two book dedicated to Death, Mort and Reaper Man. Sure, every book features Death in some capacity or another, as the Grim Reaper is ever present, but those two novels did a lot to make him into a fully realized character. He wasn't malevolent force, just an anthropomorphic personification of the act of dying, made flesh (or, at least, cloak and bone). But the rules of the Discworld are very specific: once you make something into the shape of a man it starts to take on the properties of the species; you can't make Death into a being and not expect him to develop things like needs and wants. 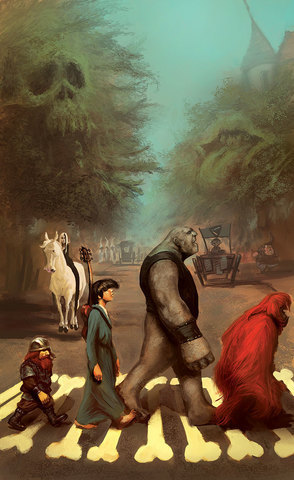 In the previous books we saw that Death had adopted a girl, raised her as his daughter, and then found an apprentice who, long term, ended up with the daughter. They went off to form a family while Death continued "the family business" of reaping souls and ensuring that life (and death) went on as normal. Then, the auditors of reality came along and tried to retire Death, which put its own spin on things. Suddenly there was a void and someone had to fill it. In that case it was a lot of someones, a Death for every species. That's how we ended up with the Death of Rats, but it's also have the rules for Death itself were codified, how we realized that Death does more than just remove souls from dead bodies: he ensures that the overall life force of the Discworld stays at a constant and proper level.

The fact is, though, that Death yearns for more. He may not have emotions quite the same way a living person (with all those glands) feels things, but he still wants, and what he wants more than anything else is just to know what humanity is like, to be a part of them in some capacity. And so, one day, Death just wanders away from his job to experience other things, to try and learn to forget and be just a little more human. As we learned, though, Death can't just abandon his post; a vacuum has to be filled, and in the absense of a Death for every occasion (which our Death put a stop to in ,span class="tilt">Reaper Man) someone else has to be sucked in to do the job. And that's where Susan Sto Helit comes in.

Susan is the daughter of Mort (Death's apprentice) and Ysabell (Death's adopted daughter). Orphaned at the age of 12, Susan (a Duchess as she inherited the title given to her mother back in Mort) has spent the last bit of time in an all-girls' academy learning lessons proper for a lady of good breeding. Obviously these lesson bore her, but it's not as if there's much else for it, so she spends most of her time reading and fading from sight (a power she's always had although she never knew why). When "the rat" (Death of Rats) and a talking crow show up at her school, Susan (quite reasonable, of course) ignores them because bony rats and talking crows don't exist. Eventually, though, they're able to suck Susan into their adventure and that's when she finally learns who her grandfather is. And with death in their blood (from grandfather along with her father, who had Death's powers for a time), Susan has inherited the family business.

Good thing she has, too, because there's something weird going on that calls for someone with her abilities. A new form of music, "Music with Rocks In", has come to the Disc and spread like wildfire. Suddenly everyone is caught up in the catchy, magical beat, and for some reason Susan is drawn to the lead singer, Imp y Celyn (aka Buddy of the Holly). Imp should have died days before he meets Susan but a magic instrument, for some reason, intervenes and takes over his life. Now the book of his life (which Susan can read) is filled with nothing but music and his body goes on playing. Susan has to figure out what's going on, stop this crazy music, and put a stop to all the craziness. And, in the process, she might just gets some answers from dear old grandfather.

I will admit the first couple of times I came to the later Death books I was a tad put off. Mort is one of my favorite books in the series so it always struck me that if the Death books were going to continue with the exteended family of Death, Mort and Ysabell should have been included. Instead we get a very stark time jump ahead and a new character we're just introduced to that suddenly becomes the center of the Death series. It's abrupt, especially when we learn that during the time jump two characters we've already come to enjoy, Mort and Ysabell, are now dead. Off page. Without much fanfare. That's a stark way to take care of beloved characters.

The fact is that Susan isn't a bad character. Sure, seeing her basically go through similar motions as Mort did in his book -- learning about Death's domain, finding the time timers and the books of people's souls, meeting Albert (Death's butler) -- can be a tad tedious, but she at least views things from a slightly different perspective. When she was very young she came to Death's realm because he wanted to meet his granddaughter, so there's a fair bit of her finally remembering who he was (from memories her parents had wiped away "for her own good") and realizing all that she lost. Plus, honestly, she had great chemistry with Death, a sweet relationship that the novel (and future novels) help to develop over time. I can understand why the author took the route of focusing on Susan, I just wish we could have had a transition book between to help smooth over the stark gap.

Death has his own interesting adventure in the process, wandering the Disc and looking for his own happiness. Seeing him try to get drunk, try to learn to forget, working as a short order cook, these are all amusing moments that help to shade Death and make him an even more realized character. It's clear that Death is still going through some stuff, that his wants and needs aren't being fulfilled. He wants to be more than just Death, to be able to shuck the responsibilities once and a while and, well, take a holiday from himself. With Susan filling the role, Death even is able to find some kind of peace for a time, so it's with regret (that you really feel from the prose) that Death eventually has to take back on the responsibilities. Susan, being a teenage girl, can't be "Death" forever (even if she was surprisingly good at the job -- it does run in the family). There's a duty and, whatever else Death wants, the duty trumps all.

Honestly, the weakest part of the story is the main plot about The Band with Rocks In. Pratchett had some amusing ideas about parodying the music industry and he's able to get a number of chuckles out of the parody bands, the song titles and various jokey names. He can mine a lot out of the inherent falseness of pre-fab bands and he pokes great fun and the artificiality of most musical productions. Where the plotline falls apart, though, is that there just isn't an ending to any of it. As with Moving Pictures and it's parodying of Hollywood, Pratchett makes Soul Music about Anhk Morpork and C.M.O.T. Dibbler. I like Dibbler, I think he's amusing, but this is material we alreaday saw once before and, as in that book, it ultimately doesn't lead anywhere.

Oh, sure, everyone goes tearing out of the city on wagons, the Band (with huge bags of money loaded in their cart) pursued by Dibbler who's pursued by the Trolls he borrow huge sums of money from, and everyone pursued by the Music Guild, followed eventually by Susan and Death. It's a fun, big, complicated sequence, but what it doesn't do is actually resolve anything. There's an esoteric sequence about the music animating Imp, and Death steps in and does somee Death magic to release the hold the music has on Imp, but it really doesn't have any kind of satisfying conclusion, especially since it's Death, and not Susan, who ends up fixing things. The main character is sidelined for a climax tjat really doesn't make that much sense.

I like everything about this book outside the Music with Rock In plotline. Susan and Death have their own storylines that are interesting, with her discovering her true lineage and him going off to discover himself. I could live without the Band With Rocks In, especially since we don't see them ever again in the series (another parallel with the characters of Moving Pictures in fact) and I wish more could have been done with them or that a different story could have been used to motivate Susan and Death. Thankfully, the next time wee meet these two main characters, there's a solid story to go along with their familial drama.