There's More to Death Than Death

And now we're really getting to the point where the DiscworldAt first blush, the Discworld series seems like just a parody of fantasy literature. Dig into any of the books, though, and you'll find deep and funny tales of a world just slightly off from our own. A world that, yes, is a flat disc carried through space on the backs of four elephants that, in turn, ride on the back of a giant space turtle. series truly starts to take shape. Fans of the series likely think about all the various recurring characters and settings the books will visit, like the City Watch, the stories about all the weird nations on the disc, and, of course, Death, then they discuss the series, and really, that all starts off in this book. While the first three novels were all about the wizards of the disc, more or less, this is the first book to truly focus on someone outside the magical circle of heroes. 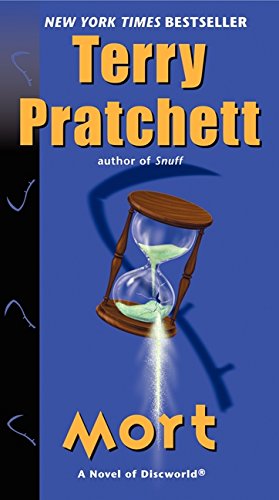 It's amusing, then, that the next protagonist we get is Death. Well, okay, Death's apprentice, Mort, but Death is still a prominent, and endearing, player in the book. Before this title Death was treated like a side character, someone to show up an taunt Rincewind, or have little philosophical exchanges with various side characters that died throughout the novels. Here, though, we get a deep and thought out exploration of who Death is and what it means to be him. And, honestly it's much more interesting that you'd expect at first blush.

As we've seen already, ideas on the disc tend to get pushed, twisted, and blown way out of proportion; everything on the world has a heightened reality that, at times, takes concepts to the point of parody (because these are comedic fantasy books). That same heightened reality is applied to Death with every aspect of him drawn to a logical conclusion. Death is timeless and immortal, an anthropomorphic personification of a concept given form by humans. Thus he has a human shape and (although he'd be loathe to admit it) human needs and wants. The don't express the same way they would in a human (since he's not really human, just human shaped) but they are still there.

That's why, as established in Mort, Death tends to "take an interest". He'll find some concept of humanity and want to explore it. In The Light Fantastic was saw that Death actually has a daughter (adopted) who lives in Death's realm. This is because Death took an interest in an orphan girl and wanted to see what it would be like to raise a daughter. There's nothing malicious about it, and as his daughter, Ysabell notes, he does try in his own way. It's just that Death doesn't express emotions or thoughts the way humans do. He's more literal and less expressive than a human is.

That's part of what makes him endearing. When he gets an idea in his head he has to follow it but he's never mean or cruel about it. He just wants to know what makes humans tick before he ends up having to reap their souls (at the appropriate time and never before). Learning about humans is part of the reason why he takes Mort, a young man looking for his first apprenticeship, into the fold: Death wants to see what it would be like to have someone to pass the job on to, to see what retirement could be like if he were to retire (if he did things like that). Plus, obviously, Ysabell needs a friend and, possible, a companion (despite the fact that Mort and Ysabell detest each other throughout the book).

Really, Mort is a fine character but he becomes his most interesting self only when he fully assumes many of Death's attributes and mannerisms. Before this, Mort is a guy just looking for his place in the world; he acts as a straight man to all of Death's weird habits and foibles. Watching Mort learn about what it means to be Death is neat, and in the process it allows Pratchett to really explore all the ins-and-outs of what it means to have a character like Death roaming a living, breathing world.

Without a doubt Death is my favorite character in the series, and Mort is a great introduction to the Death sub-series of books. That said, I don't really feel like the main plot of the book is as interesting as the characters and world around it. Essentially, Death gives Mort the "duty" for the day, letting the apprentice go off on his own (Death, meanwhile, goes fishing, finally experiencing "fun" for the first time). During his journey, Mort elects to let one princess live (instead of reaping her soul and an assassin went to kill her). The assassin is, instead, reaped and the princess, Keli, continues breathing in a world that already expects her to be dead.

This causes two issues, naturally enough. One, she's supposed to be dead so all her people have trouble seeing her, remembering she exists, and obeying her orders. Worst, though, her kingdom now exists in a pocket reality and the rest of the the time-space continuum is destined to collapse upon her. Mort had to try and find a way to save Keli, and her reality, without creating a big mess of time and space (and possibly destroying the world). Oh, and he has to keep it all a secret from Death since the Grim Reaper would be none-too-pleased to know what really happened.

Exploring this plot line is interesting, certainly, as it allows Pratchett to illustrated why Death is essential to the disc. The problem is that Keli never really grows to be more than a problem to be solved. She's not a fully realized character in the way that Death or Ysabell are. Even Mort, straight man of the group, as more development and nuance than Keli so its hard to care about her plight. We care about what Death might do to Mort, certainly, but not what it means for Keli's world.

But then that's why I always end up thinking of this as a Death book and not a Mort book. Mort may be the title character, but Death is the most interesting person in it; he steals the show. That's probably why the next Death book in the series is all about Death. But we're getting ahead of ourselves.

Minor issues aside, Mort is one of the better books of the run, and my favorite of the early titles in the series. It's overshadowed by later books, certainly, but that doesn't make it a bad title on its own. For new readers to the series, Mort is a great place to start with the series -- it runs largely independent of the other books that have come so far, a title in its own time and space. Readers can start here before going and exploring earlier (or later titles) as they see fit. Even fans of the series will enjoy coming back to this book for all the fun of exploring Death's world. He really is one of the best characters in the series.