Well, here we go, another DiscworldAt first blush, the Discworld series seems like just a parody of fantasy literature. Dig into any of the books, though, and you'll find deep and funny tales of a world just slightly off from our own. A world that, yes, is a flat disc carried through space on the backs of four elephants that, in turn, ride on the back of a giant space turtle. Rincewind book. Oh, Rincewind, you're just not a very good character. As I've noted in the past, the said "Wizzard" really only has one character trait: wherever danger is, Rincewind is running away from it. In the past this has meant that Rincewind has always somehow run away towards the plot, but the best of his novels have managed to plays this as a good thing, finding a way for him to grow and change a little in the process as the world constantly beats him over the head for his cowardice and forces him to be a hero. 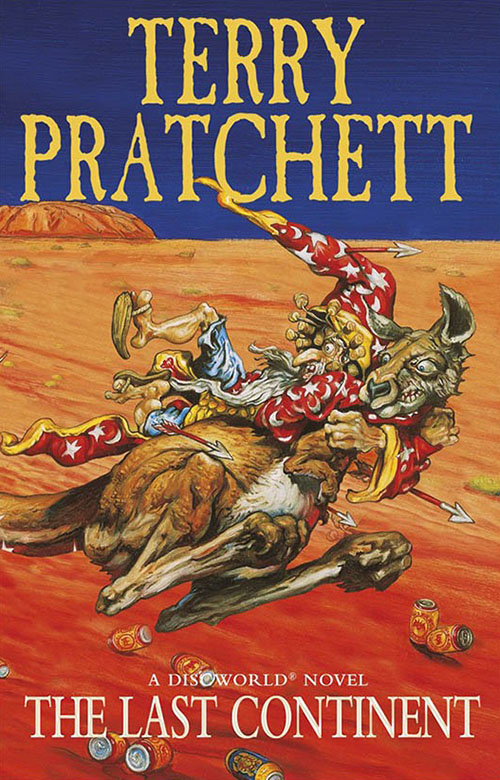 That's essentially the structure of The Last Continent, one of the last Rincewind-focused books in the whole series. Dropped into Fourecks (aka XXXX, or the place on the map of the Disc that has been unexplored) -- and continent that is, basically, Australia -- Rincewind spends his days hunting for food among the bush while avoiding any danger he can. This would basically be all Rincewind would need for the rest of his life were it not for a weird, talking kangaroo that starts showing up and tell Rincewind he has to become a hero. Every time the animal pops up he guides Rincewind where he's supposed to go, largely by telling him to go in the opposite direction and then watching Rincewind run "away". It's a smart tactic.

And what does the Kangaroo need Rincewind to do? Well, XXXX is in a bit of a drought. It never rains on the continent -- the land is surrounded on all sides by a billowing storm that keeps the rain out and all the islanders trapped within. Up until now the lack of rain hasn't been such a big deal since the groundwater would replenish itself constantly. Recently, however, the groundwater has been receding and a hero is needed to figure what went wrong and how to fix it, a job Rincewind wants nothing to do with. He's going to have to figure it out because, wouldn't you know it, the rest of the wizards from Unseen University are somehow involved in this mess, having gotten trapped on XXXX due to their own idiocy (and a window to the distant past that they all travel through before promptly getting stuck. All the wizards will, eventually, have to come together to fix the matter and save the people of Fourecks

In truth, The Last Continent isn't really much of a story. In the case of both the Wizards and Rincewind, their plot lines are basically just a random collection of little adventures and asides, strung together in the form of a story but without much real meat. Rincewind meets a lot of people, like a dwarf named Max who's basically Mad Max, and a bunch of policemen who want to hang Rincewind for... reasons, but none of it is actually integral to the plot. The same goes for the Wizards and their travel through time. They meet a creation god, have some adventures on a beach, and then... just kind of show up in the past so they can bumble around. Nothing really happens even if they do spend a lot of time doing whatever it is they do.

A big part of the problem hinges on the resolution of the whole story -- the problem with the rains and how to fix it. The kangaroo says that Rincewind is essential to the story, that only he can fix it because he's just the hero for the job. But when it comes to the climax, when the hero has to save the say, he just kind of stumbles into it and solved the issue by mistake. Like much of the story it comes out of nowhere, with little explanation, and then once it's resolved the matter is never brought up again. Not exactly a satisfying way to tie up a story.

I might not have minded all this as much if any of the characters actually evolved along the way -- sometimes a story doesn't have to have a big plot as long as the characters involved each get their own little stories and a chance to shine. Rincewind, of course, is never going to change (if he was going to show growth he would have done it in any of his previous books, and he didn't) but we have a host of other wizards, from the Archchancellor to the Dean, the Chair, the Bursar, and Ponder Stibbons. Any one of them could have show some level of growth over the course of this book, something to point to a change in their character by the time their next book rolled around, but that never happened. They all remain the same here as they were in their last book (Hogfather, where they acted as the B-plot for Susan, granddaughter of Death) and will be in their next (The Last Hero which, god, also featured Rincewind, damn it).

The only real "change" comes from the author finally letting Rincewind go home to Ankh-Morpork at the end of the novel where, we learn, he'd be made the new Professor of Cruel and Unusual Geography, and even that is only implied here (not spelled out until a later book in the series). It's a change in position for the "Wizzard", and a nice way to give him a position where he can hide and not have to be the main character of a story any further, but it's not really growth. Shoving the character out of the way is the right idea for Rincewind -- his time has come and gone -- but he's still the same character at the end of this book that he ever was.

Then there's the continent on display in this story. The series had spent time developing other sections of the Disc via their own novels, giving us a chance to see the people and learn about them, making the land feel more real. Sometimes it's been spectacular, such as in the fabulous Small Gods, while other efforts have been hobbled by an okay story while the land itself was at least able to shine, such as in Pyramids and Interesting Times (the latter being the previous Rincewind book).

The issue here is that Fourecks (or however you want to say it) never feels like a real place. It's essentially a collection of tropes -- Australians drink, Australians say a few simple catch phrases, Australians drive around in their sandy wasteland fighting each other for water and oil -- and barely stitches anything real on top of it. Tropes and stereotypes can be used as the basis to dig deeper into a story but, in the The Last Continent, that digging never happens. We don't meet any of the XXXXers that act like real people, nor do any of them become involved, long term, in the story. So we get to just watch Rincewind wander around for a bit, failing to do anything, before the book ends.

Th thing is that I didn't hate The Last Continent; as many qualms as I have with the book it's still am amusing, if very shallow, read. But the fact that its shallow keeps it from being a great book. It might be fun, and silly, and amusing in places, but it doesn't really have anything to say. At this point, with all the places the Discworld can go, I have higher expectations for these tales than what The Last Continent has to offer.