Keeps Coming Back to Me

Time travel is one of those tropes you expect any long-running Sci-Fi or Fantasy to play with eventually. "It's been how long since we started? Screw it, let's do time travel to revisit past events!" Usually it's done to help expose hidden mysteries or illuminate some key item of evidence (that, more than likely, the fan base has already figured out -- see Game of Thrones). It's rare, though, for the trope to be done well -- part of why so many series use time travel is because it's easy. It's fun for some cheap thrills, but rarely does it really add to our understanding of anything in a deep and meaningful way. 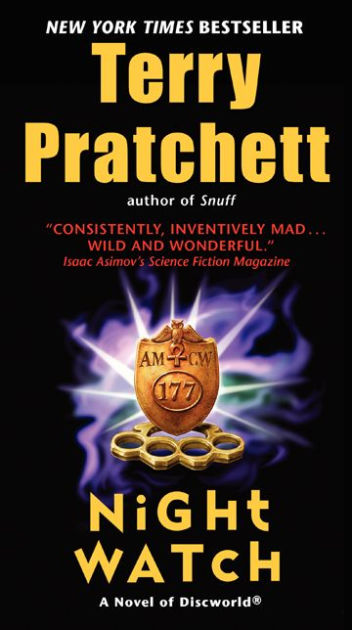 This is a barrier the 29th DiscworldAt first blush, the Discworld series seems like just a parody of fantasy literature. Dig into any of the books, though, and you'll find deep and funny tales of a world just slightly off from our own. A world that, yes, is a flat disc carried through space on the backs of four elephants that, in turn, ride on the back of a giant space turtle. book, Night Watch, had to get over when it sent Sam Vimes back in time. What does having Vimes go back in time really illuminate about his character? Does it change our understanding of him, or the city, Ankh-Morpork (which, let's face it, is its own character at this point). Does anything we learn here really change out view of the city, Sam, or the books as a whole? I'd argue no, but it is a rip-roaring, one-off adventure that, at the very least, is hard to put down.

When chasing the notorious criminal Carcer, Sam Vimes, Commander of the City Watch, Duke of Ankh-Morpork, end up pursuing the fiend all the way to Unseen University. As the two have their big showdown a magically storm blows in, blasting both of them back in time about thirty years. It's a very different city in this era, noticeably smaller but also much rougher and nastier, too. The city of the "future", under the control of Vetinari, is a city that works but here, under mad lord Winder, the city is like a den of sharks, with most people ending up as chum. Sam drops in here and had to figure out what to do and how to survive so, naturally, he takes on the identity of a new-in-town officer for the Night Watch, name of John Keel.

The real John Keel had been killed earlier that day (buy Carcer, in fact, after he landed in the past), but Keel was also a key figure in the events that were soon to follow. It seems that Ankh-Morpork is ripe for a revolution, a revolt to overthrow the yoke of Winder, and Keel helped to rally the men and keep his section of the city safe and secure. Vimes has to fill that role, rallying his men, keeping the peace, and (as it just so happens) training a young new recruit to the Watch, one Sam Vimes. Oh, and he has to do all this while finding a way back home and capturing Carcer in the process. It's a very difficult quest indeed for our Commander.

The strength of Night Watch is its sense of setting and time. By sending Vimes into the past we have a figure we've grown to trust over a series of books, so his observations on how different this city is in the past help to shape the reality we're now thrust into. He sets the stage, informs us of all the salient details, and ensures we know what's going on simply because he's getting up to speed himself. It's a smart way to frame the book while also giving us a new version of familiar territory to grow accustomed to. This might be the city we know but it's not in a shape we recognize which, on its own, helps to elevate the stakes and make everything more suspenseful.

That said, the setting is also a bit of a weakness for the story. The revolution against Lord Winder isn't something that had even been raised before -- oh sure, we'd heard there had been terrible Patricians before Vetinari but we knew little more than their names, like Winder and Snapcase, and the fact that things were worse under their control -- but because the event in question hadn't been mentioned, and there wasn't a long history here for use to reference from before, this setting doesn't have depth and familiarity for us. This is a place and a time Vimes gets dropped into but it frankly could be a foreign country and it would have the same connection in our minds.

It also means that the event in question does feel like it has any resonance for us. The Glorious Revolution of the People's Republic of Treacle Mine Road (as it's called eventually) is first mentioned here, gone over in the book, and then never brought up again afterwards. It's a setting created for this novel but it sits there free and floating, with no direct connection to characters we knew from the past. We have to take the word of the characters involved here to understand that it's important but that's then telling us, not the novels showing us over time.

The book focuses almost entirely on Vimes, very rarely cutting away to anyone else and, even then, it's mostly to inform us of events that are about to impact Sam. Keeping the book so focuses, though, is a double-edged sword. On the one hand it does keep us deeply engaged in Sam's adventure, his quest to get home and somehow maintain the timeline (as best as he can) at the same time -- too big a change and suddenly his whole life disappears once he gets back home. We are heavily invested in his story specifically, which is great. That said, the "Watch" books have always been collaborative stories with multiple angles and all of the Watch working together to solve the crime or mystery or whatever. Here there's no mystery, and no group effort, so the collaborative energy that has become the bread-and-butter of these books is missing here.

This is especially sad for anyone that has become a fan of the characters introduced to the stories over the course of the run of the Discworld. If you're looking for a story with Carrot, or Angua, or Cheery, be warned that all of these characters are barely in this story at all. Sending Vimes back in time on his own means that he's one man on his own, which ups the stakes certainly, but if even one other watchman went back with him it could have added a bit of that collaborative air that feeds these novels. Carrot is an obvious choice here, but I think sending Angua back in time to get her perspective on the city, both as a woman and a werewolf, could have added some interesting depth.

Another way to do it would have been to have the Watch working in the present, with the wizards, to find a way to get Vimes back. Instead of having the watch work on the problem, or giving Sam a chance to find a way to do it himself, the book uses a fairly obvious deus ex machina: the Monks of Time. Now, don't get me wrong, I like the time monks (introduced recently in Thief of Time) and it's fun having them make an appearance here. But, the fact of that matter is that they're too good at their job. Having them come in to fix the problem seems natural enough -- it's what they do -- but it also removes a source of tension. Of course they can bend time to their well so where's the struggle?

And yet, all these qualms aside, I still do really enjoy this book (and not just because the "Watch" series is my favorite part of Discworld). This is a tight, focused, speedy adventure helmed by a fantastic character. Maybe the perspective is a bit narrow, the adventure solved a touch too easily in the end, but the time spent in the middle, enjoying the company of Vimes as he works his way through one problem after another, makes for a very satisfying novel.