The Ballad of Three Witches

Coming at this book from the perspective of someone who loves all the books in the DiscworldAt first blush, the Discworld series seems like just a parody of fantasy literature. Dig into any of the books, though, and you'll find deep and funny tales of a world just slightly off from our own. A world that, yes, is a flat disc carried through space on the backs of four elephants that, in turn, ride on the back of a giant space turtle. (even the ones I have serious qualms with), I do have to wonder if Pratchett actually liked any of his female characters. THis is something I've been wondering about for most of the books in the series as I go back through and read them all in order (and not just cherry-picking the books I like to read over and over again). I've noticed that most of the female characters in the books are pawns of the men, or side character, or, worst, objects of ridicule. Sure, the men have their less than desirable charcters, too, like Nobby Nobbs (who's basically every bad trait and joke all rolled into one), and Sgt. Colon isn't that great. And certainly there's Rincewind, who is somehow the hero of so many books and a total coward. 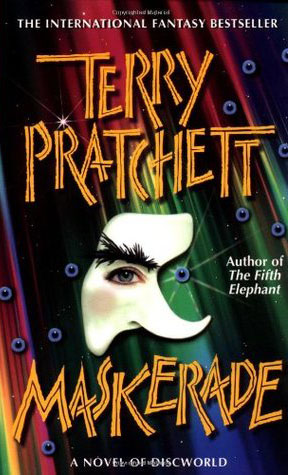 The thing is that, especially in the witches books where the ladies are the heroines of their story, the Witches are the subject of as much ridicule as nay charcters in the whole series, and the ridicule doesn't relly seem to serve much purpose except to knock the ladies down. I noticed this with Magrat (who doesn't appear in this story) back in Wyrd Sisters and Witches Abroad where the books went out of their way to pick on her for her looks, her personality, and just about everything short of shoving her head in a toilet and giving her a swirly. Nanny Ogg and Granny Weatherwax come across better than Magrat, but they're both described in unflattering terms and shown, at times, to be feared and ridiculed. And they're the protagonists.

I had to mention that because, with Maskerade, the fourth book featuring the witches (and fifth Witch book in general, counting Equal Rites) we have a new witch added to the coven and, immediately, the book goes out of its way to pick on her for her looks and her personality. After the events of Lords and Ladies, where Magrat married King Verence, Granny and Nanny are in need of a third witch to finish out their coven (because otherwise Granny will just harass Nanny exclusuively, and then there won't be a coven because one of the two of them will end up dead). So the two hatch a scheme to have the magically attuned Agnes "Perditta" Nitt join their coven and fillin the gap left by Magrat. Unfortunately for their scheme, Agnes had already left for Anhk Morpork to find fame and fortune as an opera singer.

Being magically attuned, Agnes's gift is a voice that nor normal human could match, being able to sing from a bass so deep do can make architecture rumble to a soprano so high she can shatter bones. Her voice is enough to get her into the opera's chorus, but despite her gifts she's not given a lead part because, her being so fat, she's not "lead actress material". Being in the chorus (and magically throwing her voice to the lead actress so she sounds like she's singing properly even though she has a voice even a screeching cat would hate) does provide Agnes the ability to see the inner workings on the opera. It's a good thing she's there, too, because the Opera Ghost, a man that has haunteed to opepra for years, suddenly starts killing people. It's up to Agnes, and Granny and Nanny when the arrive, to figure out who the Opera Ghost actually is and put an end to his evil before he forces the Opera to close... because everyone is dead.

In practice I like the setting of Maskerade. Anhk Morpork is the big set-piece of the whole of the Disc, the central location that everying gravitates around, which also makes it the most fleshed out and most real place in the novels. Having the Witches show up here, instead of yet another location we haven't seen before, allows them to blend into a location we know and enjoy. We know the rules of Ankh Morpork, we know how it functions and what it takes to live there. This means the Witches have to play by a certain set of rules and can't just define their own. It also affords them a chance to work their magical skills in the city, to show what they can do within an established area. It's a solid give and take between the city and the Witches which makes for a number of fun interactions.

On its surface I also think the Opera House is a good location to set the book. In previous novels, such as Soul Music, we'd seen reference to the Opera House but hadn't ever been able to explore it as a real environment. With Maskerade Pratchett takes us inside the grand building and shows us a whole new ecosystem of characters all living their lives within the cofines of the theater. It has its own laws and rules and expectations, making it into it's own little city within the larger city of Akhn Morpork. It;s a city that, honestly, resembled The Phantom of the Opera, and that is where I think the book starts to lose me.

Being, essentially, a parody of Phantom, just with the addition of three witches mucking about, the book goes through all the expected beats of a Phantom story. We have the plucky young ingenue, the "ghost" that teaches her the ropeps of being an opera singer, and the deaths that occur throughout the story. The book tries to play things like a mystery, who might actually be the Ghost, but it's pretty clear early on who has the desire and motive to terrorize the opera house. Due to the constraints of the mystery story, the novel tries to downplay who the killer could be, making you doubt the likely suspects, but it also means that we don't bond with the Ghost the same way we would with the Phantom in this story, lacking a strong love story element to go along with the teacher-student relationship. The fire that drives the Phantom is lacking her, due to obfuscation, limiting how much we can get invested in the tale.

Plus, of course, once the Witches show up is no longer a Ghost story but a Witches story. Granny and Nany are great characters, and they have a delightful time rampaging through this story (meaning we have a great time reading about them). But the fact is this is a mortal man, not faries or kings or other witches, so dealing with a common murderer feels rather beneath them. Chasing afteer a mortal, no matter what kind of mask he might wear, is soemthing they can handle in their sleep, meaning all the tension is drained. Granny and Nanny are on the scene so why worry?

It also lessens Agnes's role in the story, bad since she's supposed to be the lead character here. This is setup as Agnes's book, he chance to shine and bee fully introduced to the readers. But the novel, as I meantioned early, doesn't take her seriously. She ends up being subservient to everyone around her, doing as she's told in the opera, following the orders of the other witches, and generally getting pushed around by the novel itself. Agnes's one big play is to move to Anhk Morpork, something she does before the novel even starts, and after that she cedes any right to be the master of her own destiny. Plus, again, the book has such disdain for her I don't know if she would have really been given all that much time to shine. Not properly.

There are great moments in Maskerade, times that are luagh out loud funny. Most of these moments are, naturally, lead by Granny and Nanny who can make any scene they're in enjoyable. Fact is, though, that there's so much going on in this book, setting and plot and characters that need resolution, and most of the time is intead given over to Granny and Nanny instead of resolving many of the lesser plot threads raised during the course of the story. There's more story to tell than what we're given here so if we could have just focused on that, on the Ghost and Agnes and a series of murders and just ditched the other witches, I think the book would have been stronger all around. It certainly wouldn't have felt like just another Witches novel, which currently it does. It's fine but it could have been so much better in so many ways.