Take a Little Time for Yourself

Going through the whole of the DiscworldAt first blush, the Discworld series seems like just a parody of fantasy literature. Dig into any of the books, though, and you'll find deep and funny tales of a world just slightly off from our own. A world that, yes, is a flat disc carried through space on the backs of four elephants that, in turn, ride on the back of a giant space turtle. series, Thief of Time is a bittersweet book for me. It is, without a doubt, the best book in the "Death" sub-series, with a rich narrative, a lot of really great ideas, and a whole host of new characters that come into being. It delivers on all the fronts I want from a Discworld novel, and considering how picky I've been going back through these books with a critical eye, that should mean something indeed. 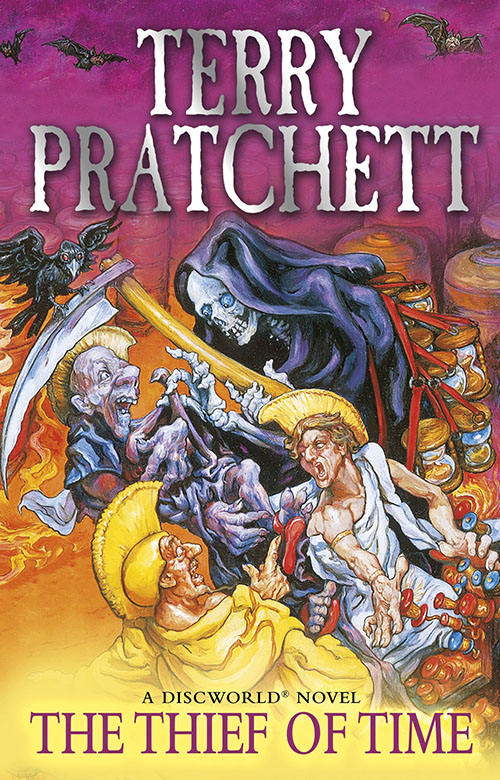 But it's bittersweet because this marks the end of another of the run of novels: this is it for "Death". Sure, Death himself continues to appear in stories, running the role he's done through (just about) every novel in the series, but as far as narratives devoted to him or his family, especially Susan, this is it. One last book before the novel series moves on. So it's a good thing its such a good one.

In Thief of Time, we find Susan Sto Helit, grand-daughter of Death, working as a teacher at a prep school. Being Death's kin and, of course, having all the powers that come with, she's quite the special kind of teacher who does her own thing and gets results. Naturally, too, since she's Death's grand-daughter, Susan eventually gets sucked into a big problem involving the Auditors of Reality, Death, and the End of the World.

What's causing the end of the world? A Glass Clock. It seems this clock can someone measure time exactly, and doing this actually causes all of time to fracture and stop, freezing time completely. It's being built by Jeremy, a clockmaker in Ankh-Morpork (because everything that happens will eventually happen in that city). Meanwhile, the Monks of Time, who keep all of Time functioning properly, realize that the construction of the Glass Clock is coming and, desperately, are tying to find a way to stop it. Two of the monks, sweeper Lu-Tze and his apprentice (and gifted acolyte) Lobsang, are sent to find the Glass Clock before it's all too late. And everyone will, of course, converge on Ankh-Morpork (because, again, everything eventually happens there).

It took my a while to warm to Susan, I will admit. Her introduction was rather sudden as her first book, Soul Music, as marked the sudden death of Mort and Ysabel (her parents, who had just got together back in Mort). Plus, every time we saw her she was holding a chip on her shoulder against Death, a character who, through these same novels (plus Reaper Man), had grown into a deep and interesting person (or person-like being). Her narrative with Death always seemed like a case of, "I'll hate you because it's narratively convenient," without it ever actually making much sense.

While there's a certain undercurrent of that in Thief of Time, despite her having come to terms with her heritage both in Soul Music and again in Hogfather, Susan is also given more to do, a storyline independent of Death or the Wizards or anyone else. She gets to play the hero, to find her own path, to be the lead of her own story, and the book is much richer for it.

It helps that, for once, there's a second character kind of like Susan in the novel. Lobsang is a special kind of guy, a humans who is also more than human, just as Susan is a little bit Death while still being mostly human. We get a better understanding of her through Lobsang and his struggles, and when the two get to pair together there's a solid dynamic and interplay between the characters. It works really well.

Even the Auditors of reality, those weird, formless cloaks who love to hang in the air and screw with the nature of things (all to make it more ordered) get to have a more interesting storyline. Here, instead of simply starting all the chaos (which, of course, they do), they also play an active role in the big climax of the novel. The grow and change and while that doesn't make them heroes -- if anything they become even more the evil antagonists as the novel goes on -- they also dynamically shift themselves in interesting ways. I can't say I like them still, and I think that's the point of the characters, but I do find their development in this novel quite interesting.

If anyone has a lackluster storyline in this novel, it's Death. While Susan is off saving the world, Death goes to round up the Four Horsemen (plus one, as is eventually revealed). While this storyline has its occasional charms it's not, on the whole, all that funny. Nor does it really add much to the story largely because Death doesn't really do much -- he goes to each horseman, gets rejected, and then later they all just show up for the Apocalypse anyway even though Death didn't do anything else and there was nothing further said. It's a bit of a narrative refuse that is there to keep Death busy without actually having a truly good reason why. And it's sad because Death is my favorite character in the whole series, hands down, and he deserved a better storyline in what ends up being his last featured book in the whole run.

Although, to be fair, I can see why this ended up being the last book. With the way things turn out the Auditors are effectively dealt with while Susan is finally in a good place in her own life (even if her issues with Death still aren't truly resolved, and probably never would have been no matter what). While the author could have retconned things and come up with a way to for the Auditors to return or spun Susan on another adventure, wiping away her connection to the characters she met here (and he has don't that before with other story threads that got in the way of his narrative), it feels better know that these storylines were all resolved. I guess, long run then, this book does act as a fitting end point for most of the characters; another book featuring them might have ruing their proper endings.

Still, I like Death and I do wish we'd had another novel or two with him before his official run ended. He will continue to show up as he always has, in minor roles in other characters' books, but as far an ending for him as a main character, he needed a bit more to finish out his run.