Despite being well over halfway into the DiscworldAt first blush, the Discworld series seems like just a parody of fantasy literature. Dig into any of the books, though, and you'll find deep and funny tales of a world just slightly off from our own. A world that, yes, is a flat disc carried through space on the backs of four elephants that, in turn, ride on the back of a giant space turtle. series we haven't really spent much time with the dwarves of the Disc. The best exposure we've had to these characters are as one offs, usually in books about "The Watch", and even then one of the most prominent dwarves is Captain Carrot, a 6-foot-6 human raised by dwarves (who, culturally, is a dwarf in everything except his stature), so maybe he's not the best representative of the culture. No, up until The Fifth Elephant, it's hard to say there's been a real storyline that truly involved the dwarves in any real capacity. 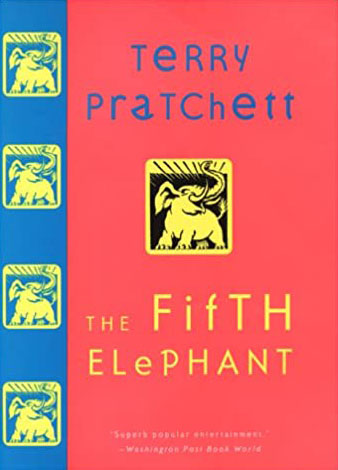 The Fifth Elephant is the first book in the series to really delve, in any meaningful way, into the whole of dwarf culture, although even now it still does it from the perspective of the Watch. More specifically via Sam Vimes, Commander of the Watch and Duke of Ankh-Morpork. Well, and Cherry, the first dwarf to really show off their gender (since all dwarves otherwise look the same, right down to their beards) as well as Detritus (the troll, a member of a species generally thought of as the mortal enemies of dwarves). It is via these characters that we take our first real peek into dwarven society, along with a much bigger exploration of Uberwald, the newest area of the Disc detailed to readers.

In fact, The Fifth Elephant acts as a kind of middle book in an impromptu "Uberwald Trilogy", following the introduction of the nation in Carpe Jugulum and then carrying through with ideas, and some Uberwaldean characters, in The Truth. For a nation that hadn't ever really been detailed before, suddenly Uberwald becomes quite a essential part of the Discworld in very short order.

Focusing on the story of this novel, Sam Vimes is sent to Uberwald to negotiate a treaty between the three leading groups in control of the territory: the dwarves, the werewolves, the vampires. Each group has their specific representative, and it's the meeting with the dwarvish representative, the (presumptive) Low King, that really sets the plot of the book in motion. At the start of the novel there was a break in at the Dwarf Bread Museum in Ankh-Morpork, and an exhibit, a replica of the Scone of Stone (essentially the throne of the Low King) was stolen. Then, in Uberwald, when Vimes met with the Low King, it was revealed that the real Scone (which was kept under tight guard normally) was gone as well. Sam suspects a plot, one to de-legitimize the incoming Low King and throw the power-dynamic of Uberwald for a loop. But who could be behind this?

Well, as it turns out, not all the controlling parties are happy with the state of affairs in Uberwald. Specifically, the werewolves want more power over the territory and view the dwarves as their primary competition (the vampires, though, are largely above the fray, remaining neutral between both sides while they see how their interests play out). As the mystery unfolds, Sam begins to suspect the werewolves were behind the theft of the Scone, as well as many deaths and attacks that have been occurring. Sam has to investigate the werewolves who, in fact, have a connection to someone Sam knows: the head werewolves, the Baron and Baroness, as parents of Sgt. Angua, prominent officer in the Ankh-Morpork Watch. These events end up dragging Angua into the mess and where she goes, Carrot ends up following. Soon, all parties will end up converging in Uberwald to either prevent a war... or start one.

The Fifth Elephant is a complicated story with a lot of different pieces moving and storylines to carry through. It has to handle introducing Uberwald in greater detail (as the nation was only a brief end-point for the previous novel in the series) while also brining in the dwarves, and the werewolves, and a bit more of the vampires (who were, at least, properly introduced as a species back in the last "Witches" book), all while dealing with a theft/murder mystery and political intrigue, plus a side plot focused on Carrot and Angua as well as events back in Ankh-Morpork That's a lot for any novel to handle and, at times, The Fifth Elephant struggles to keep up with all the moving parts at once.

After an introductory section that gets all the various parties in motion, the novel wisely decides to trim back how many moving parts it has going, focusing mostly on Sam Vimes and his adventure. He gets separated from the rest of his group, forced into a race for his life by the werewolves, and then has to survive long enough to save the day and stop a war. While the other characters play their parts, Sam becomes the de facto main character for most of the story. Which, honestly, isn't much a surprise -- most Watch books end up being Sam Vimes books no matter what other characters are involved in the story. And they work because Sam Vimes is an interesting, fleshed out character who's fun to read about.

The novel moves at a solid clip whenever Sam is the focus and, for much of its length it works, powered by Sam's devious mind and stubborn energy. Outside of Sam, though, the novel doesn't really hold together as well. While I like Carrot as a character and always enjoy spending time with him, his storyline with Angua (with the two of them moving across the Disc to intercede in events in Uberwald) doesn't really go anywhere. For a couple of novels now Pratchett has been hinting that Angua probably would leave Carrot because a werewolf and a human just can't stay together for too long. But at the end of each story Angua sticks around again, and that's exactly what happens where. Whatever pressure is put on their relationship in this book is gone by the end, with the reset button essentially pushed once more so the status quo of their relationship is maintained.

Still, their plot line is more interesting than the events in Ankh-Morpork With both Sam and Carrot off in Uberwald, Colon is promoted to Captain and he completely buckles under the pressure, going kind of batty. This is a plot line that could have had an impact on the novels moving forward, as Colon slowly destroys the Watch from within with his inability to manage anything at all, but the whole storyline is played for laughs (laughs, I'll note, that never materialize), and then, as with Carrot and Angua, the reset button is pushed by the end of the novel. There's no consequence to the story, not like there is for the main plot with Sam.

Because of Sam we learn more about the dwarves, their underground society and their political structure. Because of the Commander's plot line we get a good idea of how Uberwald functions and, due to his actions, the path for Uberwald forward (into the Century of the Fruit Bat) is changed. Having read through this series before I know that the events of Sam's plot line in this book will reverberate for novels to come, with more emphasis placed on the characters of this story, like the Low King, as we continue through the series. This is an important book in the series, especially when we look at the dwarves, and the trolls, and their uneasy peace moving forward.

In short, The Fifth Elephant is an essential part of the Discworld series. It's also a fantastic read. Despite qualms I have with a couple of the side stories, they aren't as big a factor as the Sam Vimes-led A-plot, and it's a real cracker of a tale. The Watch usually has good stories (the occasional Jingo notwithstanding), but this novel really kicks the whole of the Watch sub-series up another notch. The Watch is essential to Ankh-Morpork moving forward from here and, in that same regard, The Fifth Elephant is essential to the whole series. It's a solid novel, with a great story, that will carry through for the rest of the novels to come.