Well, it was bound to happen: Rincewind is back. After his last appearance, in Eric (when the Wizard finally escaped the Hell dimension is was stuck in after the events of Sourcery), the worst wizard in the world had to show back up sooner or later. And he has, on a paradise island, far away from anyone and everything (including everything he was afraid of). That is until the other wizards, those of Unseen Academy, pull Rincewindd back into their world for another rousing adventure of running, cowardice, and avoiding troubles for as long as he can. This time he's sent to the Counterweight Continent, to act as an envoy to the Agatean Empire (think China, essentially), before the Agateans decide it's high time to launch a war on the rest of the world. But what Rincewind finds when he gets to the Golden Empire is a tale of inrigue, danger, and a whole lot of running. So, you know, a fairly standard day for Rincewind. 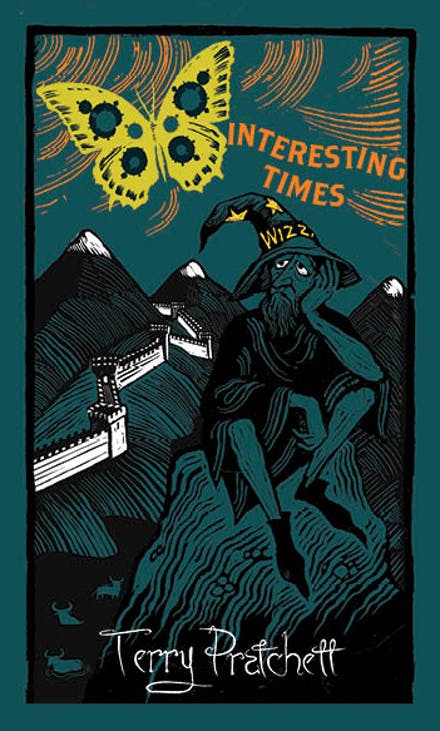 that I'm not a huge fan of Rincewind (at least, not as the lead character of a novel). He has his moments, to be sure, and he can be quite amusing at times, but frankly Rincewind just doesn't have enough going for him to make him interesting. His primary traits are that he can (somewhat badly) speak any language, can't cast any magic, and runs from everything. In the right moments, like when the wizards use him as a weather vein for trouble, Rincewind can be a handy guy to have around (just look in the opposite direction of where he's running and you'll know where the danger is coming from).

But that's all Rincewind can do -- he can't fight, he can't cast magic, and he doesn't really care enough about anyone to, generally, stick his neck out for people. If someone is going off to get killed, even if Rincewind could stop them, he'll geneally run away instead because that's what he does. He's, really, an Anti-Stu, a lead character that always ends up at the center of every adventure and, through no fault of his own, ends up somehow saving the day (badly). These characters can have their uses (I have experience in that department having

That's my problem with Rincewind: he's not interesting because we know exactly what he'll do (run) and we know when he'll do it (the very first chance he gets). When he gets dropped (literally and unceremoniously, I will noter, by the other Wizards) in the middle of the Agatean Empire, he knows what his mission is. Namely he's to go to the central capitol and present himself as the "Grand Wizzard of Anhk Morpork" as per the summons the Empire sent the Partician. It's the one thing he has to do an, supposedly, it'll head off a war between East and West (it actually wouldn't, but Rincewind doesn't yet know that). So, goal in mind about what he's supposed to do, Rincewind immediately heads in the opposite direction reasoning that the farther he gets from the capitol the farther he is from danger. Classic Rincewind, I suppose.

To get Rincewind involved in the story, then, the author has to pull ever trick he can to keep his hero focused (and even then they only work 30% of the timee). Pratchett is forced, over and over, to have people capture Rincewind, to force him in the direction he's supposed to go when he keeps trying to run away. Over and over again he's captured and lured, ever closer, to the capitol, the one place he's supposed to go and the one place he refuses. Ture, it's in character for Rincewind to run from danger (and deep down he reasons correctly that danger is lurking at the Agatean capital), and I appreciate that Pratchett at least keeps the character true to himself. It would just be nice if, after five books at this point in the series, Rincewind could have shown some growth. Either that or, by this point, the character should have been retired to let everyone else in his circle take the lead.

This isn't just an grumpy complaint, mind you, but something the author even realized was necessary, long term. Eventually Rincewind will be retired (somewhere in the Science of Discworld books), only trotted out as a side character to be used for his few good traits. That allows the other wizards to take the lead of their stories, something that's been brewing in the series for a while now. The rest of the Wizards, from Ridcully to the Librarian, the Dean and the Bursar, and all the rest of the motley crew, are a varied and interesting lot with a lot of internal conflict. They're also, however, dedicated to protecting the universe from magical threats so, unlike Rincewind, when danger strikes they run towards it, not away, which makes for a much more interesting story.

Look at the books featuring the wizards, but not Rincewind, as proof of this. The best parts of Moving Pictures was the storyline with the wizards (much better than the actual main plot at the movie studio). They also nicely spiced up Lords and Ladies, giving that Witches tale some needed fun (and a bit of a love story as well). And while their contribution to Soul Music wasn't as important as the tale of Death and Susan they still added some fun. They're a delightful group that both more humorous and more interesting than Rincewind even on his best day.

That's probably why so much of this book is dedicated to Cohen the Barbarian and his Horde (all of them nonagenarians at least). Cohen was amusing back in his first tale (helping Rincewind back in The Light Fantastic), a parody of the classic barbarians like Conan, helping to draw that parallel to the books Pratchett set out to parody before the Discworld grew so much larger. Given plenty of time away, though, Pratchett manages to find new humor to mine from Cohen and his collection of barbarians, all of them so old they've gotten particularly good at not dying. I'm not saying Cohen could have carried a book all on his own (so far there's not quite enough depth to the character to pull that off), but as an agent of chaos, a maker of change, Cohen really gets this book going and makes it sing.

Ideally this book could have featured Cohen and his Horde going up against the Agatean Empire (much like it does in the book) but instead of them constantly finding Rincewind and, somehow, being aided by his ineptitude, they could have been assisted by the actual Wizards. The book constantly throws Rincewind into the middle of trouble but I think having the group of wizards here instead, bickering and fighting and constantly talking over the Agateans and their crazy demands and calls for war, would have been a damn sight more interesting than anything Rincewind manages to do. They would have added spice and chaos to the mix and, just maybe, they could have brought new ideas out for Cohen in the process and helped to develop him even further.

Interesting Times isn't a bad book -- the half featuring Cohen is fun and Rincewind at least isn't as annoying here as he could be (and really was back in the slight adventure of Eric) -- but it could have been so much better. It's a middling tale, and adventure that seems too simple for Cohen and too dangerous for Rincewind, and neither of them have any interest in getting invested in the world around them. This is the first, and I think last, time we'll see the Agatean EEmpire in any real capacity and it would have been nice if different characters could have been sent here to give us a better perspective on the continent. With Rincewind as our guide our tour of the world was lacking.