Women Can Be Wizards Too

The first two books in the DiscworldAt first blush, the Discworld series seems like just a parody of fantasy literature. Dig into any of the books, though, and you'll find deep and funny tales of a world just slightly off from our own. A world that, yes, is a flat disc carried through space on the backs of four elephants that, in turn, ride on the back of a giant space turtle. series, The Colour of Magic and The Light Fantastic, we a continuing adventure following Rincewind, failed wizard (and, in some cases, failed human). While one might expect that the third book in the series would also follow Rincewind -- he's the hero of the series, right? -- the books take a turn, instead focusing on building out the world more and populating it with new and different characters. While the first two books were all about the wizards (through Rincewind), book three, Equal Rites finds a different group of magically-inclined people to focus on: the witches. 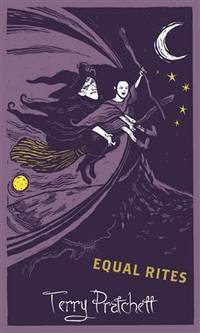 On the disc, magic is broken up into two major types: wizardry, of spells and books and lots of rote, memorized work; and witchcraft, which is a lot of herbs and animal tending and focusing on human minds. As said by Granny Weatherwax (the first of the senior wizards we're introduced to in the series), witchcraft is really "headology", getting into the mind of a person and making them think they feel better; once the mind is on board, the body usually follows. Most of what Granny does in this first book is headology, with just a little borrowing (getting into the mind of an animal and floating along with them to see the world from their eyes) which, honestly, is kind of the same thing. Witchcraft in Discworld is well thought out and stands as an interesting counterpoint to wizard magic in the series.

If anything, this book highlights how much better the construction of witchcraft is over wizardry in the series. The wizardry was obviously designed as a parody of D&D-style magic. Wizards have to do complex spells, that they memorize ahead of time, which also require implements and artifacts and all kinds of materials to pull off properly. Except then, in some instances, spells just happen and magic can occur at any time. Wizardry on the disc is poorly defined (beyond "Magic for men"), whereas witchcraft has clearly established rules. We can easily understand what witches can and can't do and there's never a doubt that something is a cheat for them. That's not to say that witchcraft doesn't get more fleshed out after this book but even the basic rules of witchcraft as established in Equal Rites hold true moving forward.

The book itself is an interesting story that purposefully puts the two types of magic against each other. When an elderly wizard comes to the Ramtops (the high mountains of the disc) he arrives in search of the eighth child of an eighth child. This soon-to-be born babe will be a wizard (as the number 8 is very powerful on the disc), The wizard, who is dying (wizards know when they will die and Death is required to come collect them upon the occasion) grants his magic and powers to the child, helping them along their way into wizardry.

There's only one small hitch: the child is a girl so she can't be a wizard. As this girl, named Eskarina, grows up she shows latent magical ability. Her father, the local blacksmith hands her training over the Granny Weatherwax, the local witch, who then has to find an outlet for the girl's magical abilities. However, even Granny is outmatched for this task, so she has to bundle Esk up and lead the girl down to Anhk Morpork so she can be enrolled in Unseen University. That is, if the wizards will even have her. Wizardry is for men, and Eskarina is clearly not male. The witches then have to fight for equal rites (title drop) before Eskarina's magic bursts out of her.

Equal Rites is an improvement over the previous two books in a number of ways, not the least of which is because Rincewind isn't in this book. As I've noted before, Rincewind is an amusing character in small doses, but his first few appearances in the series cast him as the nominal hero and the character just isn't suited for the role. He's soft and cowardly and just not up to the rigors of being the protagonist in a tale. While the joke of that can work for a while, eventually Rincewind wears on a reader, leaving you longing for someone more interesting to follow.

And in steps Granny Weatherwax. The Discworld novels can be broken into various cycles: the wizards, the witches, Death (who we'll get to in the next book), and so on. When it comes to the witches, the main character of those books is really Granny. Eventually she'll gain other senior witches to work with (forming a loose coven), but up until Pratchett really started writing YA books in the series (and created a new, young witch, Tiffany Aching, to follow), witch stories were all about Granny. This is because Granny is awesome -- tough and steely with a dry, dark wit that she uses like a whip. She's a strong character that moves the world around her (and not the other way around).

Granny serves as a kind of parodic rebuke of the idea of evil, nasty witches. Sure, she's purposefully written into the trope, using the thought that all witches are cruel and evil to her advantage when the need strikes (such as pushing people to do the right thing because "Granny is watching"). But while she uses the tropes, she doesn't buy into them; she's kind at heart and has sympathy for those around her. It's just that she's also hard and steely, using her rough exterior to protect herself (and her powers) from misuse (even by her own hands). There are layers to her character that, thankfully, the series will explore in future books. Even here, though, Granny is a well-realized character and a strong enough presence to carry the novel.

Of course, Granny isn't the only major character in the novel (just the one that carries on through the series). Eskarina is also a power player here, although I'd argue that despite being setup as the protagonist of the novel she's much more of an agent of chaos, someone setup so that others are forced to grow and learn. Esk forces Granny to come out of her comfort zone, to train another witch and, eventually, head to the big city for new sights and adventures. Esk also forces the wizards to reevaluate their own prejudices and learn that not everyone that can do magic is going to fit a very specific mold. Her path through the book is fairly obvious (is there really any doubt that, one way or another, she's going to learn wizard magic?), so it's what she does, and who she does it to, that's more important.

In ways, Equal Rites is a political book. Pratchett really enjoyed mixing real world lessons into his novel, and this one obviously is about the power dynamic between the genders. Writing it from the female perspective obvious tilts Pratchett's hand some as to which side of the argument he leans, but then the real lesson of the novel is more about equality than picking sides. Both the wizards and the witches have skills and it's important, by book's end, to mix the practices and learn more about both.

Really, if there's anything that bothers me about the book at all it's that, down the road, Eskarina doesn't have as much of an influence on the series as you'd expect. Oh sure, she shows up once more in a later Tiffany Aching book, but you'd expect to see more female wizards at Unseen University after this novel, and that just doesn't occur. It's also weird, really, that Tiffany (a character I do enjoy) is introduced at all when Eskarina was there, ready to have a series of adventures written about her. While I think Tiffany's stories are great, Esk feels like an afterthought once you get deep into the Discworld.

These are small flaws I'm willing to forgive, though, as the series was still growing at this phase. As we'll see over the next few books, there is going to be quite an upheaval to come before the "modern" disc is really settled. If some stuff from these early books doesn't quite blend right down the road it's to be forgiven due to the changes to come...