Let's Hear It for the Crew!

It's amazing to think about just how much Star TrekOriginally conceived as "Wagon Train in Space", Star Trek was released during the height of the Hollywood Western film and TV boom. While the concept CBS originally asked for had a western vibe, it was the smart, intellectual stories set in a future utopia of science and exploration that proved vital to the series' long impact on popular culture. there is right now. We went from the last show of an era being Enterprise, and under-loved show that did have its issues but it probably better know for "killing the franchise" (for a time) than for its own merits. The movies also petered out with Beyond, and that was at a time when the movies where the only thing keeping the franchise going (and that movie isn't exactly beloved by the fandom either). It was a dark time for Stat Trek fans. 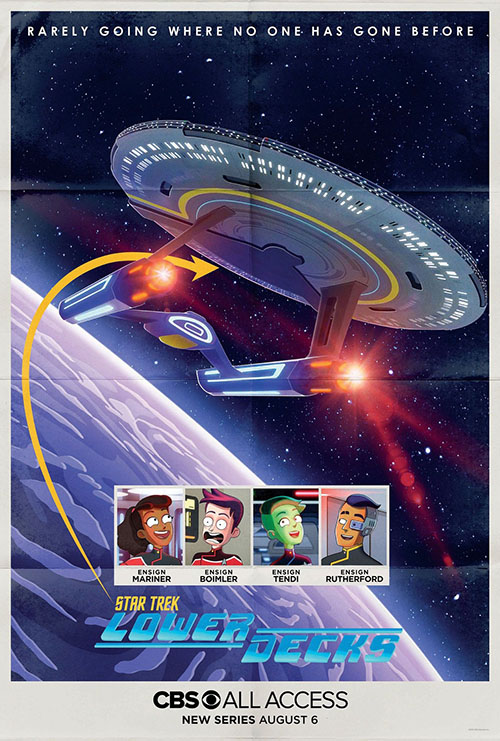 Now, however, we have three shows actively going on -- Discovery, Picard, and Lower Decks, plus both Prodigy and Strange New Worlds in development, and more projects and mini-series apparently in the pipe (but currently unannounced). It's a plethora of options after it felt like the franchise had all but died. And at least one of them is actually good!

Despite all the hype put behind the other shows -- "This one has Spock!", "This one has Picard!", "This one has Janeway!" -- it's amusing that the silly little cartoon that effectively grew out of Rick and Morty (sharing a creative lead that left that show to come over for Star Trek) is also the best of the current shows we got. And that's not a backhanded compliment as if to say, "it's the best because all the rest just suck." No, the other shows do have their issues but Star Trek: Lower Decks actually manages to be a honorable entry into the franchise that manages to poke just enough fun at the foundations to keep it lively while still actually loving the series and respecting what the franchise is really all about. That's quite the feat, and it's something the show does even better in its second season.

The second season of Lower Decks picks up soon after the end of the first, with Mariner still sore about Boimler leaving the U.S.S. Cerritos to accept a promotion to Lieutenant J.G. (one and half pips!) on the U.S.S. Titan (Riker's ship). Naturally, after a couple of intro episodes which make Mariner realize how much she actually misses the doofus, Boimler is forced to go back to the Cerritos (there was a transporter accident and a clone taking over his position on the Titan) and the reunited crew gets back to being lower-deckers and running the ship the right way.

In the process the quadrant has to deal with a new threat: the rise of the Pakleds. These aliens (that, frankly, don't seem that smart) are constantly trying to start a war with the Federation (and, well, every other governmental group they run into) and, often, it's the crew of the Cerritos that has to deal with it. Along the way the quartet at the center of the show -- Mariner, Boimler, Tendi, and Rutherford -- grow closer, gain respect from the bridge crew, and learn what it means to truly help the ship as a lower-decker. 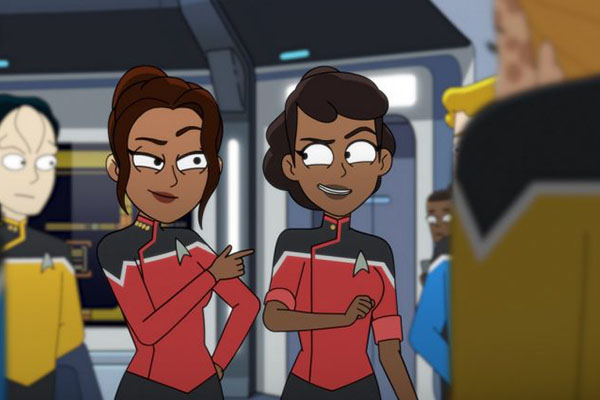 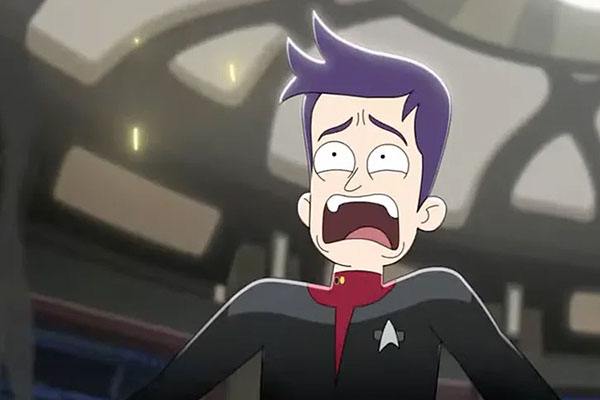 Part of the fun of the show is, yes, the way it makes (loving) jokes at the expense of Star Trek. The series is littered with all kinds of call backs and references to things that have happened on the show, characters that were influential -- "I'm a Kirk, damn it!" -- and the casual tropes that the shows so often fell into. My favorite gag of the season was when Tendi and Rutherford built a tiny replica of the Cerritos from a model kit, completely with working warp core, and then, when trouble struck later that episode, they had to eject the warp core from their tiny ship to save the day. You always eject the warp core. Always.

At the same time the show respects the tropes that it plays with and never does anything half-assed. For instance, this season saw the introduction of Lieutenant J.G. Kayshon, a Tamarian who now serves as chief of security on the ship. For those that remember way back in The Next Generation, the Tamarians are a race whose entire language was based on metaphors from their collective past history and mythology (we covered the episode in that TNG review, if you need a refresher). And yes, Kayshon can still slip into his metaphor speak, which made for a pretty solid set of gags in his introduction episode, "Kayshon, His Eyes Open". But then he keeps showing up, just a regular part of the crew that, yes, sometimes makes his little metaphor lines for laughs but, most of the time he's the chief of security. That's respecting the world building and honoring the character even after his purpose as a laugh is over.

The series does a lot of that world building, but it's not just focused on the new characters this season. Much of the time is spent fleshing out the main quartet, diving into Boimler's need to be perfect and get recognition, while the show also spends time deflating Mariner's ego and getting to her real core as she, ever so slowly, lets her guard down. Tendi and Rutherford, meanwhile, continue to build their friendship together, steadily growing closer (but, so far, in a purely platonic way) while each finds ways to make themselves more and more useful on the ship. Even the bridge crew gets more fleshed out, with Capt. Freeman growing closer to her daughter, Mariner, while Cmdr. Ransom ever so slowly takes Boimler under his wing. It's long-form storytelling and character development but it works so well.

What's impressive, though, is that the show does all this without ever slipping into true serialized storytelling. Unlike with Discovery or Picard, both of which have gone hard core on telling single narrative arcs for each of their seasons, Lower Decks sticks to the format of previous shows, especially those from the TNG era (which Lower Decks is also set in). The show uses the story-of-the-week format to set up situations and use them for story development, but it never gets bogged down trying to make some bigger arc or some grand story. That's not to say it doesn't happen -- again, the Pakleds, for instance -- but it's subtle and is allowed to build organically while other stories happen. The show is never so focused on its ongoing story that it loses sight of the forest for the tress. 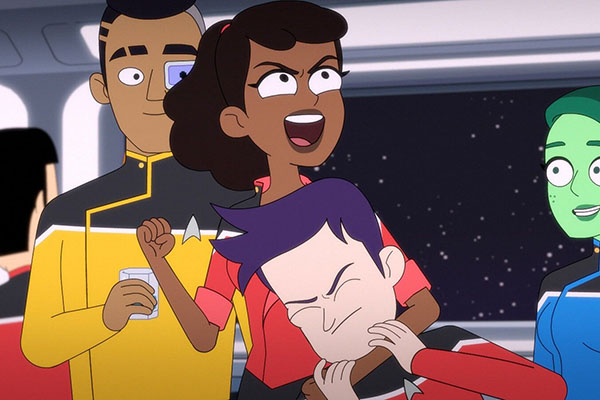 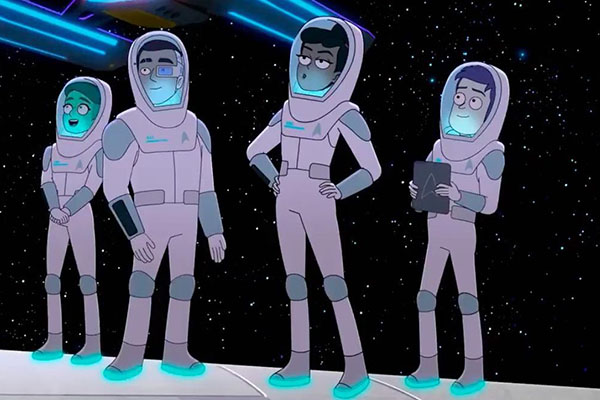 And, yes, it's very funny. The point of the show is to make you laugh, the closest the franchise has ever come towards being a sitcom, but in the context of the show it works really well. If nothing else, it's a fresh angle that Star Trek never tackled as, despite clever moments in the franchise the show very much went closer to the dramatic side of sci-fi. Letting the franchise relax, let its hair down, and have fun with its own history and moments does so much to refresh the show and make it feel interesting and new.

The second season of the show makes Lower Decks richer and more interesting. Having taken the first season to setup the dynamics and put the characters in place, this season is able to just start rolling and produce the kind of show you can tell the producers wanted to make all along. The first season was great but season two is even better. It may even be good enough to unseat Galaxy Quest as the best comedic take on the franchise (or maybe that's just hyperbole).