Okay, I don't think anyone is ever going to argue that this film is as bad as Nemesis, for fourth and final Next Gen film (which I'm dreading watching but it'll have to be done). Widely considered to be the worst of the Next Gen run, Nemesis stole that crown from today's flick, Generations (while also handily stealing the title of "worst over all" from The Motion Picture and/or The Final Frontier). Before that film came out, everyone thought Generations was the low point for Next Gen. This was the de facto bottom of the barrel for years. 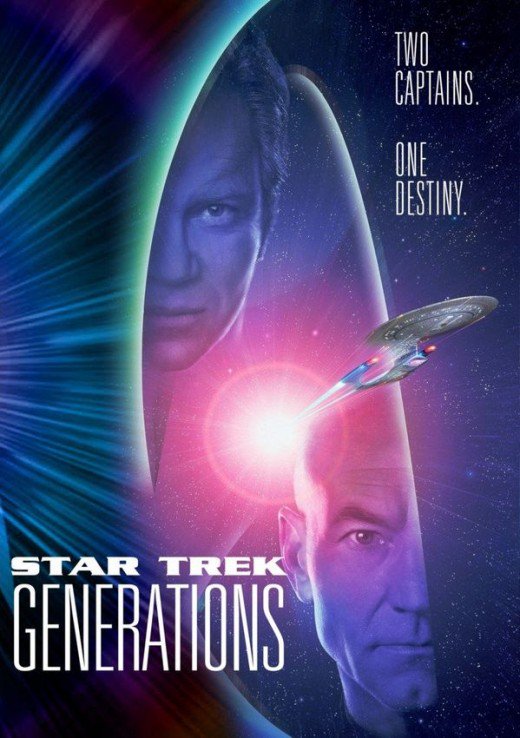 But does it deserve that? Is Generations really as bad as they say? When I started this project I knew I'd have to sit through some stinkers, but I've always tried to go in with an open mind, to try and see if there was something, anything I could like about each of these films. My memories of Generations weren't all that great -- sitting in a theater when it came out, being bored and annoyed -- but perhaps time has been kind to this film and it was actually a hidden gem. It's not, but it's also not as bad as I remember.

Weirdly, Generations is both a continuation of Star Trek: The Next Generation, picking up sometime after the events of the series finale, as well as another sequel in the classic movie series (essentially making this a sequel to Star Tre VI: The Undiscovered Country. We open back in the classic era, with Kirk, Scotty, and Chekov boarding the Enterprise B as guests of Captain John Harriman (Alan Ruck, eternally Cameron from Ferris Bueller) to see the ship's official first launch out of space port. While on the launch cruise, though, the ship runs into danger: a strange band of energy travelling through space has two freighters caught in its wake and the ships will explode, killing all its crew, if the ship doesn't help. Leaping into action, Kirk aids the captain to make the right calls and save the day.

Sadly, in the process of all this, Kirk is seemingly killed. Jumping forward, though, we eventually learn that the energy band isn't just space wave, but an entrance to some kind of dream dimension, a paradise where time and space don't really exist and anyone can have whatever they want whenever they want. One scientist, Tolian Soran (Malcolm McDowell) was "stolen" from the rift (where he spent days with his wife and children, all of whom had actually been killed by the Borg years earlier) during the Enterprise B incident. Now, 78 years later, Soran has a way back into the rift (damn the consequences), and it's up to Picard to stop him (with, eventually, a little help from a time-displaced Kirk).

Starting off with the good, the scenes with the classic characters are great. As silly and bloated as it is to attach a long opening sequence with the original cast to the front of the film (well, some of the original cast, as the whole cast wasn't actually willing to come back for this film), this sequence has a spark and energy much of the rest of the movie lacks. It's fun to see the crew once again up to their old antics, seeing danger and immediately throwing themselves in the way of it. The chemistry between Shatner, Doohan, and Koenig is great, and they clearly still loved performing as these characters -- it was old hat to them and they did it so well. 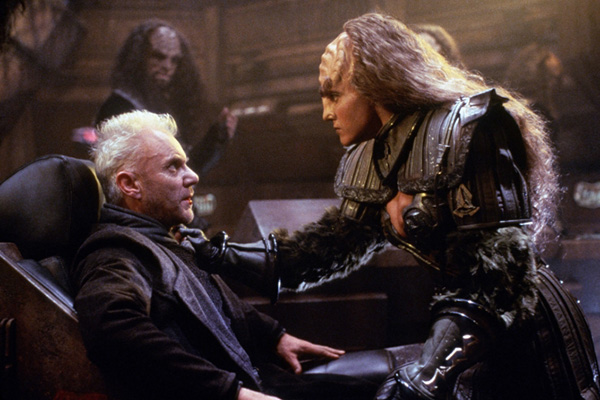 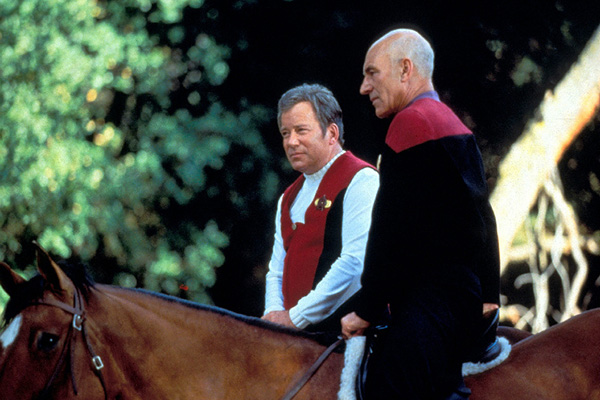 To a lesser extent the latter section of the film has that similar spark. Seeing Kirk and Picard work together is great fun, and clearly Shatner was enjoying this time as well. Really, Shatner carries so much of the movie, imbuing Kirk with fire and energy. Say what you will about the actor (and many of his castmates have, repeatedly, in the past), but he was really good at playing Kirk.

Sadly, the whole reason to have the captain in there really just feels shoehorned in. Kirk isn't essentially to the plot, not showing up again until the last 20 minutes or so and then acting, basically, as a deus ex machina to resolve the central conflict. Instead of forcing Kirk into the film the writers could have found just about any other solution to stopping Soran. If Picard needed help, find a way to get Riker down there. Or, better yet, if you want to have Kirk show up in the Next Gen era, handle it better. The Next Gen episode, "Relics" already showed how you could integrate a classic crew member from out-of-time into an episode (and it was Doohan's Scotty, yet again, meaning these characters have wildly overlapping timelines). It shouldn't have been that hard to get Kirk into the current era without it feeling so tacked on.

The whole central conflict, too, has absolutely no energy behind it. Soran wants to get back into a dreamy alternate plane of existence, the physics of which make absolutely no sense when you think about it. Picard fails to stop Soran from going into the dream-state the first time, and Picard is then sucked in as well. Once he realizes it's all fake (which of course he does), he wants to get out but he acknowledges he needs help. Since Kirk is also in the rift, Picard convinces the other captain to come out with him as well, and the two somehow travel back in time to before the rift hits the planet and sucks Soran and Picard into the rift. How? Even if we accept that you can time travel in the rift (because it's somehow timeless), how can they go from the rift to a space-time the rift isn't, at that moment, occupying? And if he could travel to anywhere and any when, why only loop time back by ten minutes? Why not a couple of days and just throw Soran in the brig before he sees it coming?

Plus, once you introduce time travel with a fixed entry point, you drain all the thrill out of a climax. If Picard fails the second time around, can't he just go into the rift and then try again? For that matter, he could try again and again, getting more and more of his crew along for the ride with him until everyone on the Enterprise D is in the rift and time looping. Soran surely couldn't fight off a good dozen crew members all bum-rushing him at once. 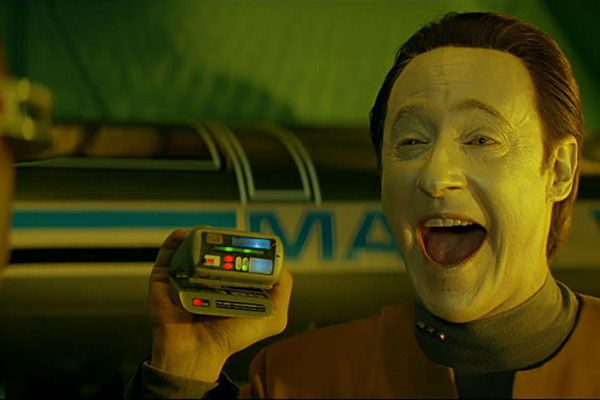 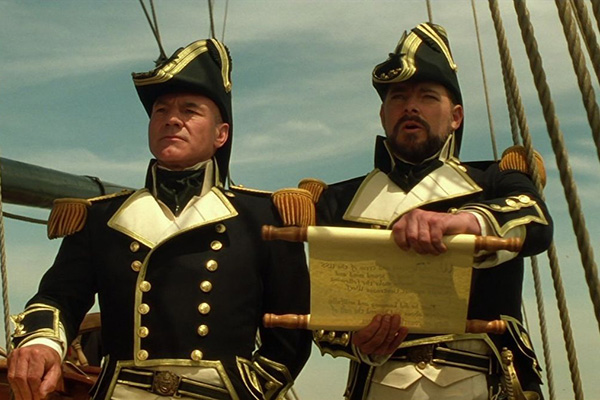 Not that we care at all if Soran wins or loses since he's barely a character. I like Malcom McDowell as the man is able to play some really vile characters. Here though, McDowell is just wasted. He's not given a lot of screen time so we never really get a sense of who he is. Everyone describes him as a "madman" but he comes across as pretty sane (if evil). The biggest issue, though, is that we never get a sense of what he's trying to get back to -- we never see his side of the dream rift so we don't get to know the family he lost, what his paradise is like, or anything that might us care about the character at all. Pathos is what's missing from the character, a revelation about his drive and desires, so he's essentially little more than a generic bad guy thrown in to give Picard and Kirk someone to fight.

On a broader scale, though, the move has issues with tone and style. In many ways it feels like a Next Gen episode drawn out to a two-hour length. None of it feel larger, bigger, better than anything we'd seen on the series. Even the special effects weren't all that special with very few standout moments to make you go "oh, that's where the Hollywood budget went". This could have been any-old two-parter in the series (and not a very good two-parter) and no one would have noticed the difference. It's just... boring. It limits its scope and focuses its energy so much on getting Picard and Kirk together than nothing else in the movie really matters to the story.

I wish the film had done more, focused less on putting Picard and Kirk in the same room and given everyone else more to do. Worf is underused, Crusher barely shows up at all, and Riker is only really there because he's always standing next to Picard on the bridge. Data, really, gets the only B-plot, dealing with finally installing his emotions chip and then being super irritating about it throughout the rest of the movie. Hell, the only other character that really does anything is Counselor Troi, and that's just because she talks to Picard and Data a few times about their experiences. It's a waste of a great cast.

The film needs a lot of work to be good. Heck, it needs a lot of work to be half-way to "middling". There are parts of it I like, and some sequence that I don't hate. For much of it, though, I was largely just zoned out. It wasn't a completely awful experience, but it's wasn't all that fun either. It squanders all its potential on a half-baked concept and an under-developed villain. Kick and Picard hanging out together deserved a better story, and the rest of the cast deserved a better movie.