It's interesting when you look at the various TV shows and films that Amazon PrimeWhile Netflix might be the largest streaming seervice right now, other major contenders have come into the game. One of the biggest, and best funded, is Amazon Prime, the streaming-service add-on packing with free delivery and all kinds of other perks Amazon gives its members. And, with the backing of its corporate parent, this streaming service very well could become the market leader. has produced. While they do have some lighter fare -- the occasional Good Omens or Mrs. Maisel -- most of their productions fall into he same category: violent and grim-dark. I don't know if that's a conscious decision on the part of the streamer (maybe their internal data says that people watch things for how much violence is in them), but it does seem to be a trend out of Amazon Prime. 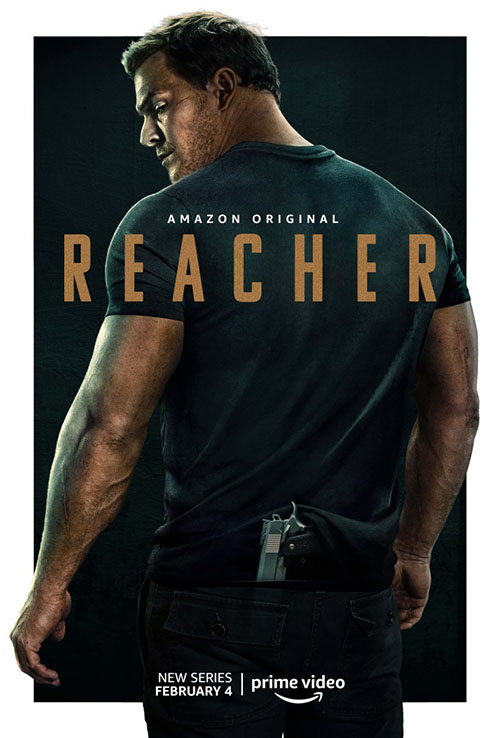 Just looking at many of the things I've covered for this site shows a list of dark, gritty, self-serious shows: The Boys, Carnival Row, Hanna, Jack Ryan, Without Remorse. It's not everything Amazon produces, but there does seem to be a growing house style. Amazon likes its heroes against grey backdrops, coated in blood, with nary a smile to be seen. And to that list we can add Reacher.

Based on the novels by Lee Child (with this first season adapting Killing Floor), Reacher is a series that wouldn't feel out of place as a season of either Jack Ryan or Without Remorse. Our hero is a stoic ex-military man who knows how to get things done. When trouble comes his way he reacts the only way he knows how: with violence. A giant beast of a man, Reacher (Alan Ritchson) solves his problems with his fists and with guns. He gets the job done, he gets the bad guys, and it doesn't matter to him how many bodies have to drop in the process. Frankly, considering tone and content I could easily see this show crossing over with Jack Ryan or Without Remorse. The shows are based on different book series (by different authors) but after going through the Amazon machine they all feel the same.

This first season of the show sees our hero Jack Reacher (although everyone just calls him "Reacher", including his mother, weirdly) walking into the town of Margrave, GA. A Blues fan, Reacher wanted to visit the town to see one of the last places a Blues musician had played. He'd gotten the idea from his brother, Joe, some time earlier, so in trundled Reacher, there to see the sights and sample a slice of peach pie. Unfortunately for Reacher a murder had happened recently in town and as the only new person in the community Reacher is the sole suspect for the crime (which he didn't commit).

Talking over the case with Chief Detective Oscar Finlay (Malcolm Goodwin) and Officer Roscoe Conklin (Willa Fitzgerald), Reacher begins to suspect the murder wasn't just and isolated incident but a massive conspiracy that, as he digs deeper, could lead all the way to the top of the town's government... and beyond. And, of course, only Reacher (assisted by the police) could possible solve this crime. He sees the clues, he understand the killers, and he's right in the middle of everything happening. Plus, he has a personal stake in the matter as he soon discovers that the murder that happened just as he came to town was his own brother, Joe. Reacher is out for revenge and no one and nothing will stop him. 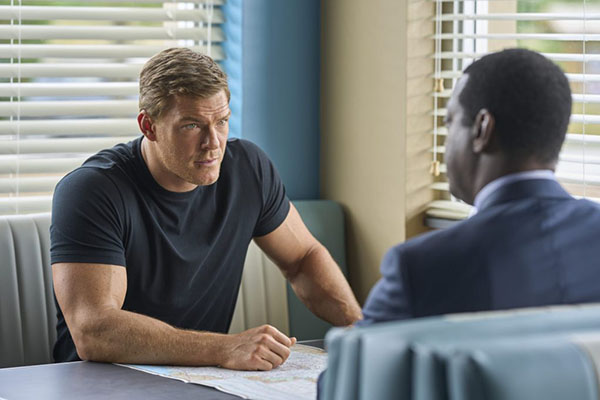 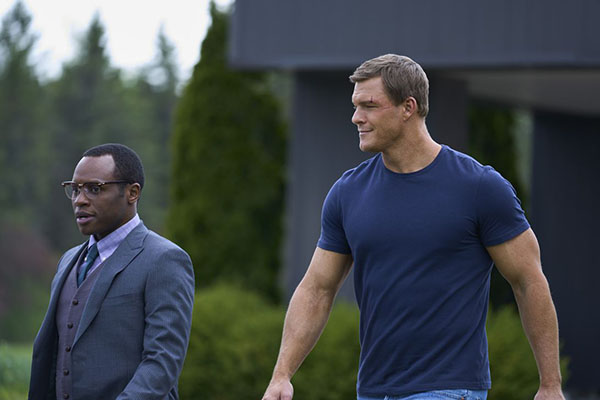 This new Amazon series has some pretty big flaws but, before we get to those, I do need to single out the greatest strength of the show: Alan Ritchson. Coming in from two-and-a-half season on Titans, where he played Hawk, the actor is the charismatic presence this show needs to make its lead character interesting. As written Reacher is a pretty mirthless character, a hulking menace that barrels his way through the town (and beyond). But Ritchson is able to add just a little sparkle to the performance, a note of knowing and a hint of a smile, that makes Reacher someone you want to watch. The show doesn't really know what to do with the actor but Ritchson does what he can with the show.

The series also has a couple of solid co-stars in the form of Malcolm Goodwin (Breakout Kings, iZombie) and Willa Fitzgerald (MTV's Scream). As with Ritchson the series doesn't really know how to handle these stars either. It casts them as second bananas and basically just puts them through the motions of the plot while having them get dwarfed by Reacher's shadow, but the stars have their own charisma that peeks through regardless. This show isn't a great showcase for Goodwin or Fitzgerald but it is nice to see them get steady work and acquit themselves well in the process.

The issue with the show is really that it's absolutely in love with Reacher. The character has his questionable edges, to be sure: he's gruff, he's he's violent, and he's so direct he blasts past many forms of human decency. The show doesn't tr to sand down any of these edges over time, instead simply making everyone get out of his way (after a couple of times calling him out on it). It makes for a character that, were he played by a less charismatic presence than Ritchson, would be absolutely unwatchable. He's not a good person, as a person, but the show never actually makes him learn that or find a way to better bond with people.

Beyond that, Reacher's actions are questionable at best. Yes, he helps uncover a criminal conspiracy, taking out murderers (who have their share of over-the-top crimes). But Reacher plays at their level, going violent act for violent act with the bad guys. Worse, the cops on the show don't even question it. "Oh, you killed a bunch of dudes... well... they were bad guys, right?" The cops should be the voice of reason, they should temper the character down and try to get him to leave at least some people alive. Instead, across four states, Reacher leaves a trail of bodies he'll never once have to pay for. That just didn't seem right at all. 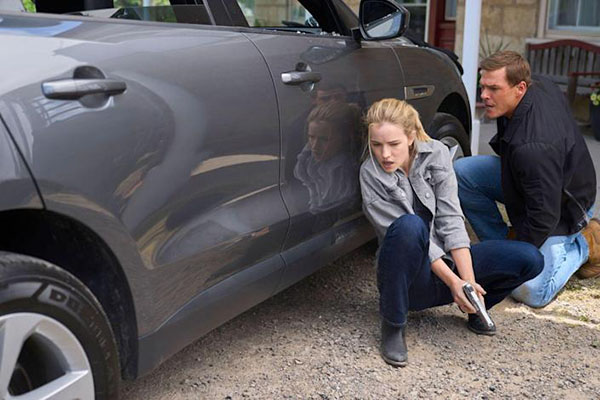 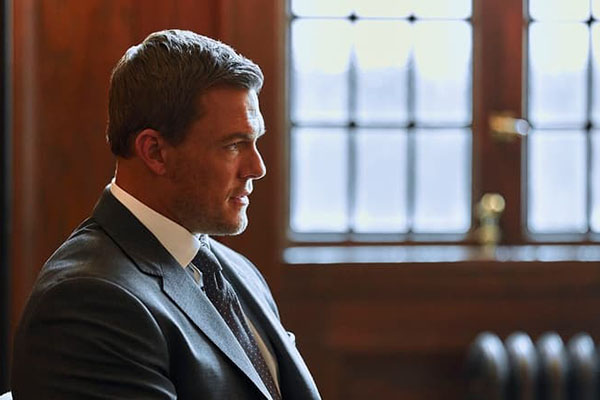 This gets back to the hero worship the show bathes upon Reacher. Hell, the good cops in town (Finlay and Conklin) get to participate in their own level of over-the-top violence by the end of it and the show doesn't judge them either. It lets everyone descend into 1980s levels of violent action climax, and it treats every single one of them as heroes. Maybe that's how it played out in the novel (I haven't read it so I don't know) but it doesn't work in this day and age with all the stories of violent cops and the bad things they do. There should be more actual justice on this series and a bit less vigilante justice to balance it out. We never get that.

From a lizard brain perspective Reacher is watchable. Despite the qualms I had with the show I still binged through it in three days, and I found myself enjoying plenty of scenes and sequences. There's a core here that works, primarily with the actors, but the show needs to stop worshiping its cops and military guys quite so much and actually allow for a bit of nuance in the series. Reacher is a simple guy who gets right to the point but when we're talking about the real world, with bad cops and hazy lines of what's "right and wrong", a bit more nuance is needed. This show has the action and explosions down to a tee. Now it needs to get its heart in the right place.