I think if you grew up in the '80s and '90s you probably ended up as a fan of The Tick. Starting in 1994, the cartoon series is what made the big, blue, goofy character famous. It ran for three seasons of really weird, off-kilter humor, airing not only on Fox original but eventually getting syndicated on Comedy Central, having a nice long run there as well. It's an awesome, excellent show that holds up largely because the show sets itself in this weird, timeless take on the modern superhero setup. 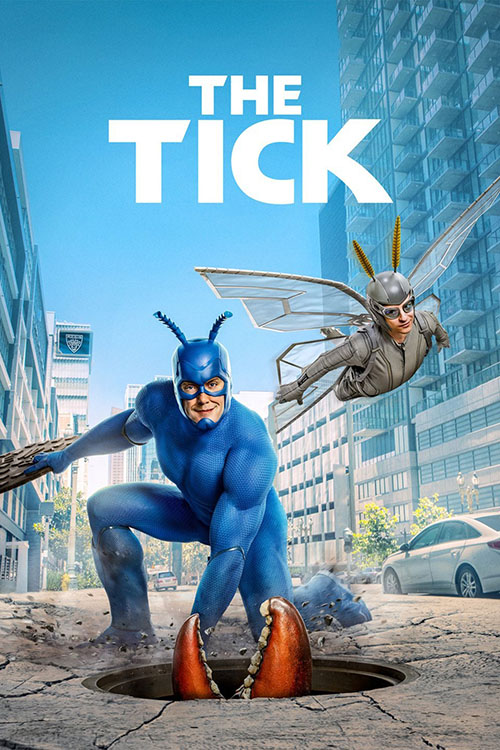 Of course, the cartoon wasn't the originator of the Tick (along with Arthur, and all their weird colleagues). The character originally appeared in a series of comics written by Ben Edlund in 1986. The character grew in popularity until eventually Edlund took him out into the world to try and do big things with the big blue lug. The cartoon was first, and then was followed by a live action series in 2001. The show wasn't necessarily bad -- I know a lot of people who liked it, and the performance from Patrick Warburton as the Tick was a highlight -- but the show never clicked for me. It also didn't click for a lot of other people as the show was quickly canceled after just a single, rather short season.

Thankfully, it seemed, the character would be coming back again. In 2016, a full 15 years after he last graced TV screen, the Tick returned in a new, Amazon PrimeWhile Netflix might be the largest streaming seervice right now, other major contenders have come into the game. One of the biggest, and best funded, is Amazon Prime, the streaming-service add-on packing with free delivery and all kinds of other perks Amazon gives its members. And, with the backing of its corporate parent, this streaming service very well could become the market leader. streaming show. Once again titled The Tick, this show seemed to be setting up a darker, more gritty take on the character which, admittedly, made a certain amount of sense. The Tick has always been a parody of other superheroes, a big dumb guy that crashes through buildings and spouts nonsensical hero speeches. He's basically every other superhero turned up to 11, the natural end-point for the whole genre. But as superheroes evolve, the concept of The Tick had to evolve as well. When the Amazon pilot episode debuted, the grim dark DC Extended UniverseStarted as DC Comics' answer to the MCU, the early films in the franchise stumbled out of the gates, often mired in grim-dark storytelling and the rushed need to get this franchise started. Eventually, though, the films began to even out, becoming better as they went along. Still, this franchise has a long way to go before it's true completion for Marvel's universe. seemed like the next big thing.

Of course, then the DCEU's grim-dark vision bombed, and that series lightened up to match the Marvel Cinematic UniverseWhen it first began in 2008 with a little film called Iron Man no one suspected the empire that would follow. Superhero movies in the past, especially those not featuring either Batman or Superman, were usually terrible. And yet, Iron Man would lead to a long series of successful films, launching the most successful cinema brand in history: the Marvel Cinematic Universe., and The Tick evolved with it. So that leaves us with three distinct phases of The Tick and it's worth highlighting each one to show how the show shifted and changed and, more importantly, to discuss why the fans may not have stuck around leading, sadly, to the show being canceled by Amazon just last month.

In the initial episode this version of The Tick seemed to try for a different relationship between the lead duo, the Tick (Peter Serafinowicz) and Arthur (Griffin Newman), than we'd seen before. Sure, the basic elements of them were thee same -- the Tick was still a big, dumb, lovable guy while the Arthur was a twitchy, nebbish accountant -- but their relationship to each other and the rest of the characters seemed very different. Arthur this time around had been going to therapy for years after watching his father die at the hands of The Terror (Jackie Earl Haley), so when the Tick wanders into his life he doesn't even really believe the hero exists; he's pretty sure the Tick is a delusion and that he's gone right off the deep end. This was a twist on the formula that many reviewers praised and, admittedly, I thought it was an interesting idea. 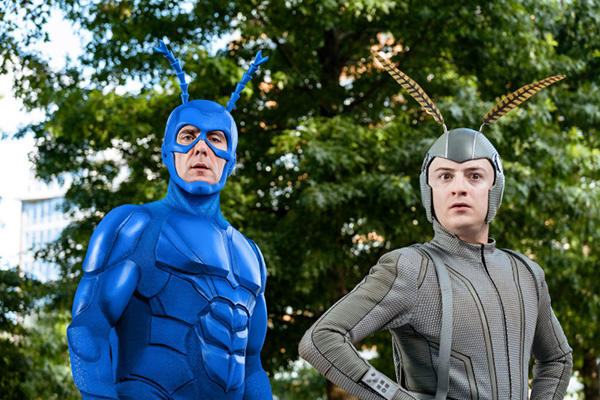 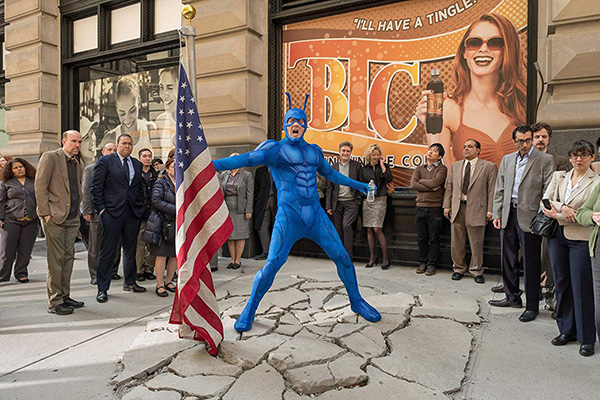 But then the show very quickly ditched that in the next episodes (once the show was picked up and started officially airing a year later -- Amazon did a very strange pilot system for a while there). Soon others are seeing the Tick and the show quickly shifts from Arthur's own internal psychosis towards finding hope, and redemption, teaming up with the blue lummox. Over the course of the season Arthur finds his own strength within, becoming a reliable partner for the tick as they battle the Terror and his head goon, Miss Lint (Yara Martinez).

I really enjoyed the first season of the show. It was goofy and weird, with the right level of off-kilter humor. Because it was live action the show obvious couldn't do the big stunts the cartoon could regularly get away with, so it traded those for more jokes, more smaller effects (like all the static cling issues Miss Lint had), and just a whole lot of world building. Because familiar characters like American Maid and Die Fledermaus were tied up in licensing rights with the Haim Saban (the company that produced the cartoon), they couldn't show up in this series. Instead of going the route of the 2001 series, making new characters called Captain Liberty and Batmanuel who were basically the same characters in all but name, the show strikes out in a different direction, creating characters to poke fun at the current crop of characters in the mainstream media.

For starters there's Overkill (Scott Speiser), who is basically a cyborg version of The Punisher. Just making a parody of the Punisher, though, isn't enough for the show, so they gave him a cool vehicle, Danger Boat, and had it voiced by Alan Tudyk. This setup of these characters played like comedy gold with the grim-dark overly serious Overkill being constantly deflated by the erudite Danger Boat. It's a great setup, the kind of character dynamic that could really only happen on The Tick.

The character I liked even more, though, was Dot (Valorie Curry), Arthur's sister. In previous versions of the show Dot tended to serve as a kind of wet blanket, someone to grouse at Arthur and complain that he really shouldn't be a superhero. This time around, though, Dot is just as troubled as Arthur and this leads her to find her own path in the superhero world. Instead of sitting on the sidelines and bitching, Dot gets to join the game, striking up her own camaraderie with Overkill, deepening his story as well as her own. This was a really smart move from the show. 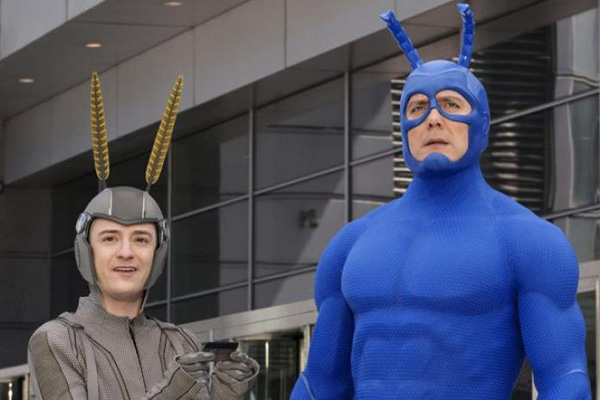 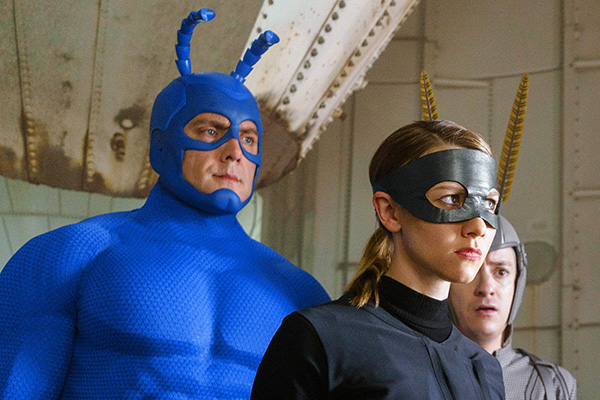 Of course, between first and second seasons of the show the superhero landscape changed further. DC really started reworking their properties, trying to find better and better ways to ape the MCU formula. Being grim-dark really wasn't the way to go anymore, so when the other players shifted gears, so too did The Tick. DC tried to make Justice League (and, really, failed at it), but The Tick took the idea and launched a storyline about Tick and Arthur joining up with A.E.G.I.S. to be two members of the Flag Five (essentially the Justice League, but goofier). That's how you get characters like Flexon (Steven Ogg), a lawyer/master of stretching, and Sage (Cle Bennet), a master of the mystical arts who casts all his spells through a magical third nipple. That's the Flag Five.

But to get on the team Tick and Arthur first had to fight Lobstercules, a massive lobster/bank robber. In traditional Tick fashion, Lobstercules turns out to actually be a good person and there's much more going on than it appears. And, while this is going on we have the rise and fall of Superion (Brendan Hines), the most perfect Superman parody I have ever seen. Seriously, this show is just brimming with great characters and strange ideas. And, by the end of the season, it all just worked so well. So why was it canceled?

Well, note that I said by the end of the season the show was great. The issue, I think, is that season two started out a little rough. The early gags in the episodes didn't really seem to connect and the show got mired in story sacrificing humor for eventual setup. By the fourth episode or so the show really started firing again, once more becoming the big, dumb, goofy show it needed to be for its title character. It just took its time getting there and I could see a number of viewers walking away instead of finishing it out.

So the show was canceled and, right now, it seems like that's all that's going to be written for this version of the character. That's not to say the show is truly dead -- the cast are still talking it up and there's a very real possibility some other service might come along and renew it. Fact is, though, that with so many other networks out there, all of which want to producer their own, in-house content, The Tick might not be able to find a savior to give it a proper renewal. That would be sad, too, because once it got going, season two of the show was fantastic, better even than the first. You just had to be willing to let it build, to be the show it needed to be. 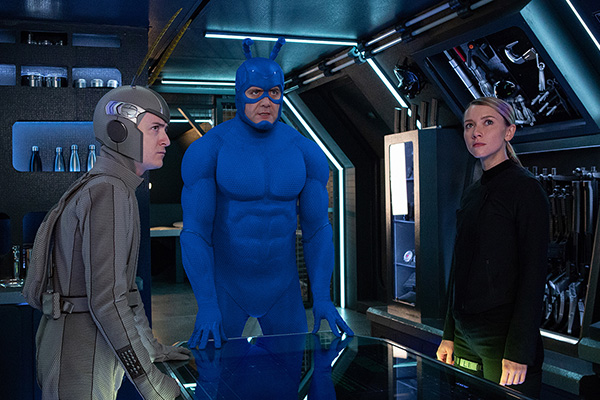 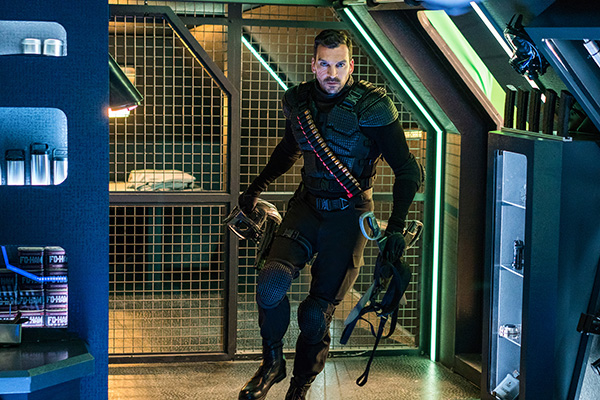 If you haven't watched the season season of the show, or if you started to and then turned it off, go back and give it a watch. The show really is great and anyone with even a passing interest in The Tick, or just superheroes in general, should really give it some love. This is a show that was canceled too soon (which is a refrain Tick fans say every time) but this time we might just have a chance to save it. Shout "SPOON!" loud into the air and enjoy this hilarious show.