An Angel and a Devil Walk Into a Bar

As a confession, I'm not a fan of the original Good Omens novel. I read it 15 or so years ago in the midst of going through every DiscworldAt first blush, the Discworld series seems like just a parody of fantasy literature. Dig into any of the books, though, and you'll find deep and funny tales of a world just slightly off from our own. A world that, yes, is a flat disc carried through space on the backs of four elephants that, in turn, ride on the back of a giant space turtle. book that was out at the time and while I loved that fantasy series (and still love it), this collaborate tale from Terry Pratchett and Neil Gaiman fell flat for me. It was a perfectly fine book, one I was able to finish relatively quickly, but at the same time it didn't really thrill me. Something was missing from the narrative, something to make me want to reread it over and over. After getting through the book once I set it on my shelf and never went back. 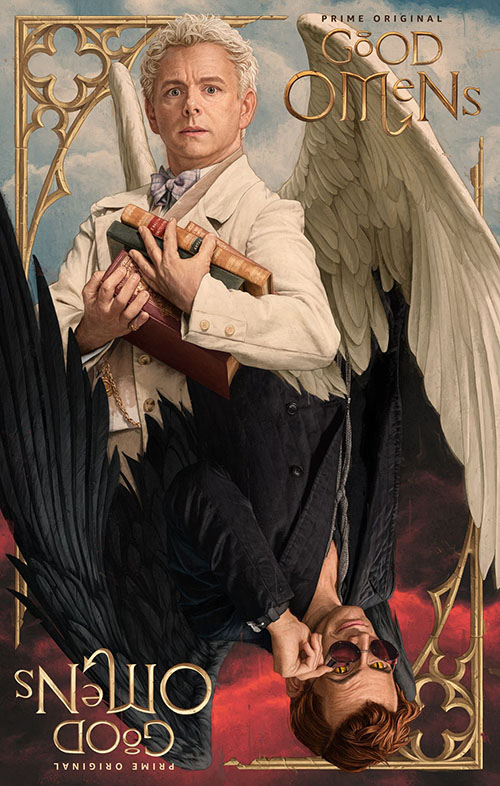 Now, for the Good Omens-faithful, a confession like that must read as blasphemy (ironically, considering the material we're discussing). There are legions of fans out there who would probably read me the riot act for a statement like that. But then, there are people that would also rail at me about the fact that I don't care much for the Sandman series (another Gaiman production), and I ignore those people just like I'll ignore the Good Omens superfans. They are entitled to their opinion just like I'm allowed to know they're wrong and nothing they say will change that.

Still, when Amazon PrimeWhile Netflix might be the largest streaming seervice right now, other major contenders have come into the game. One of the biggest, and best funded, is Amazon Prime, the streaming-service add-on packing with free delivery and all kinds of other perks Amazon gives its members. And, with the backing of its corporate parent, this streaming service very well could become the market leader. announced they were producing an adaptation of Good Omens I was at least intrigued. Starring David Tennant as the demon Crowly and Michael Sheen as the angel Aziraphale, the show was stacked with a cast of people I would certainly enjoy watching -- John Hamm, Benedict Cumberbatch, Michael McKean, and Frances McDormand included. it's a solid collection of great U.S. and U.K. actors, people that can sell even the worst crap (well, most of the time; Cumberbatch did fail me with the latter seasons of Sherlock and his portions of the Hobbit), so it was easy to think this production would be a good one to watch.

In many ways it is. If the goal was to see Tennant and Sheen banter and bicker for long stretches of time, basking in their amiable chemistry, then this production succeeds. When it's focused on these two, their long history as protectors of the Earth, and their eventual quest to stop the Antichrist (an 11 year old boy living in a small, English hamlet), this production sings. These two are the emotional core of the series and when they take center stage the film just whirls past; they make the mini-series an absolute joy to watch.

It's interesting because the show does, at times, know the lightning in a bottle it has with these two leads. You can tell the show really wanted to focus on them as much as it could, giving us extended flashbacks with the characters -- Rocker-chique Crowley, played to swaggering perfection by Tennant; anal-retentive, totally refined to the point of being a dandy Aziraphale, acted so well by Sheen -- and then trying as hard as it can to keep the characters in the center of the narrative. If the show could have just been about them going off and having fab adventures or simply sitting around, watching them eat crepes while they chatted, it would have been so good. An Odd Couple-esque sitcom with these two would be an utter joy to watch. 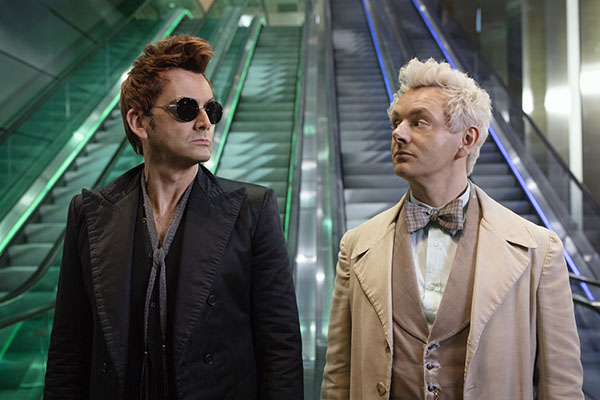 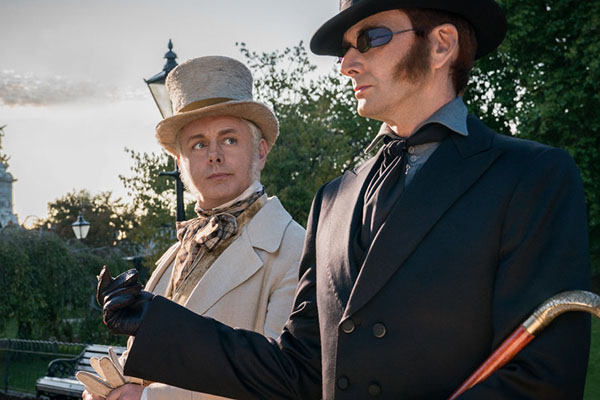 Unfortunately the series, like the novel before it, has a bunch of characters who are Crowley or Aziraphale, and it's here that the show loses steam and becomes much less interesting. For starters, while Crowley and Aziraphale are nuanced, fleshed-out characters, ones given plenty of development and flashbacks so we learn all about them, none of the other supernatural beings, Heavenly or Hellish, are given the same treatment. Both sides of the coming conflict, the Armageddon to be unleashed by the Antichrist, are essentially the same in the eyes of the story (a fact that makes sense when you consider it was written by two atheists). Both the angels and demons are treated as a collective villain of the piece, a group essentially wishing for the end of the world so both sides can come together in the final war and settle which side really is in control of the fates of men. It just doesn't work.

A good villain is one you care about. While you might not agree with their crazy plan, whatever it may be, you can at least understand where they're coming from. A proper, fully developed villain is one you can sympathize with even as you root against them. But because the angels and demons in the piece (lead character notwithstanding) are all shallow, one-dimensional characters (the whole lot of them), we never care about their plan for the Earth. They're so shallow, so clearly transparent, that it's obvious they'll lose in the end, so why even care?

Other characters in the mini-series fare better but, unfortunately, none of them get as much development as they really need. For starters, there's the Antichrist. As a character he's okay, an 11-year old boy named Adam (Sam Taylor Buck) who we get to know in a few scenes before he comes into his evil powers and almost ends the world. We come to understand him as a young, precocious kid, and that side of him is developed well enough that, to a certain extent, we do come to care about him (and his his gang of friends). But then he gets his powers and it's like a switch is flicked inside him. The Adam we knew is basically gone and, for a long stretch, never returns. This renders all the development of the character moot, making him has shallow as the angels and demons. Eventually the show backtracks right before the finale, but by this point the damage is already done. Adam is either a kid or a towering evil being, but there's no middle ground and certainly no nuance

Then there's Anathema Device (Adria Arjona), the latest in a long line of witches (and literal plot device). As we see in a back-story segment, Anathema's great-great-many-times-over-grandmother, Agnes Nutter, was a clairvoyant who could see the future. Before she was burned at the stake (an event she saw coming, of course), she wrote down all her predictions for the next 300 years (very nice and quite accurate predictions) and, since then, her descendants have been using the predictions to get rich and, in the process, save the world. That's why Anathema is in the story, to use this book of prophecies to stop the !ntichrist. Anathema is a character that could have been interesting, is actually quite interesting at times when the actress, Arjona, is allowed to just be a flustered wreck. But, for much of the series she's pushed around as little more than a plot device (thus her name) and never really gets a story of her own. Right when the character starts to get interesting the series ends. 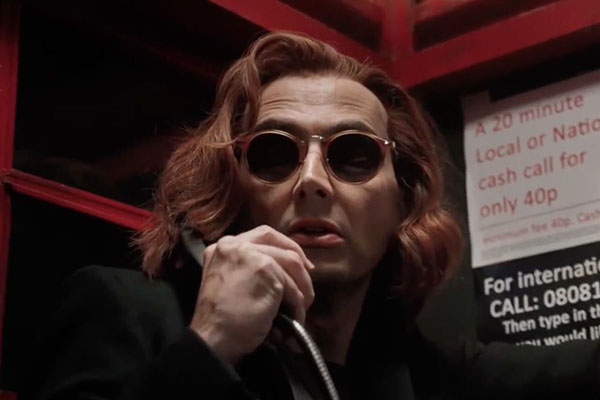 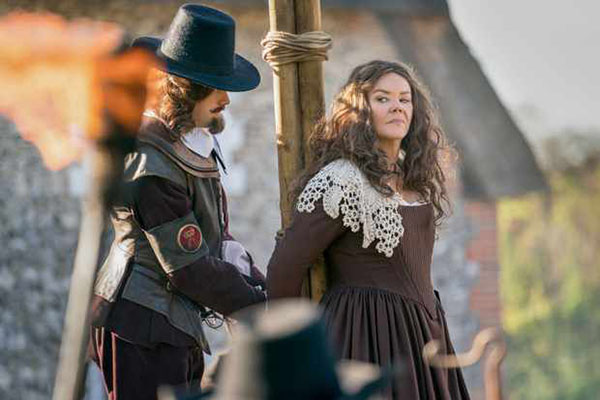 There are so many characters in the series that get this treatment. The Four Horsemen are greatly trimmed back in the series from the role they played in the book (and a second set of horsemen to make the cut at all). The witchfinder Sergeant (McKean) is a barely there character who never stops being a couple of ticks and one joke. Even John Hamm's Archangel Gabriel, a part fleshed out from the book, is a barely-there entity who hardly rises up in the material. So many great characters and greater actors wasted in this show.

And yet, for the most part I enjoyed it because, so often, the series found its way back to Tennant and Sheen. With these two at the center the show would light back up once more. If it were any other actors I don't think these parts would work, and without these great characters the entire series would die. Whoever was behind casting these two should be rewarded because the elevate the material far more than should be possible, making a potentially mediocre series into one that's, more often than not, a whole lot of fun.

If you're one of the Good Omens-faithful I'm sure you'll enjoy this series; it is, for the most part, exactly what you'd be hoping for from an adaptation of the book. For people like me this show is still pretty good but it has many of the flaws the book had as well. If you like Tennant and Sheen that shouldn't be a problem, but if you don't then this might not be the series for you. This is their show, their stage, and everything in the production hangs off them.