Just Let Him Have the Planet

Godzilla: Planet of the Monsters

I think it's fair to admit that I am probably the last person that should be reviewing Godzilla: Planet of the Monsters as I'm neither a fan of Godzilla nor do I care much for anime, and this film is a Gozilla anime. I can't think of a single movie I'm more redisposed to hate than Planet of the Monsters. And, yes, I did pretty well detest this film, but not specifically because it was anime or that it features the big, green monster. II didn't like it because, honestly, this movie was just awful, start to finish. 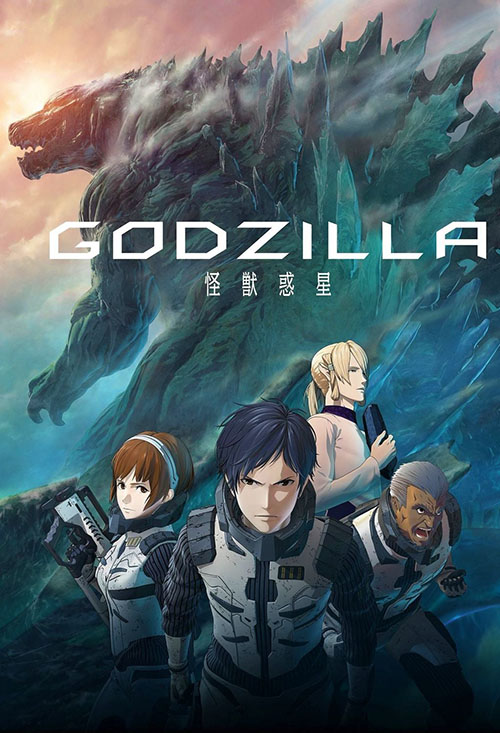 Look, the point of a monster movie -- Godzilla or otherwise -- is to show massive, wanton carnage that we, as the audience, can cheer for or cringe away from (depending on the political content of the movie -- certainly the first Gojira was meant to be a horror film not a rip-roaring monster-smash fest). All you need for evern a decent Godzilla movie is a bunch of buildings for him to destroy and plenty of room for him to do his thing while humans run away. Unfortunately, due to the setup of the film, that one great pleasure of the monster movie genre is completely eliminated, replaced by generic sci-fi trappings and bloodless action. Like many of the more recent attempts at rebooting the franchise, it's a Godzilla movie that doesn't actually understand how to be a Godzilla movie.

In the film, Humanity left Earth 20 years prior on a collection of alien ships (the aliens having arrived just in the nick of time to save humanity) all because Godzilla, the king of the monsters, had suddenly appeared and started destroying everything in his path. THe humans were powerless to stop him as Godzilla was seemingly shielded against most damage and could instantly regenerate any injuries he suffered. It was either fight a losing war until the whole of the human race or flee and find a new home. Sadly, after twenty years in space humanity still had yet to find a suitable planet to colonize. With new technology devised, and a new plan in place, the last humans survivors change their plans and head back to Earth in the hopes that, this time, they can fight and defeat Godzilla and take back their planet for themselves.

Plans don't exactly work out once the humans go back home. Instead of finding a planet that's only been ravaged by Godzilla for 20 years, or 1,000 years due to timee dialation of space travel, it's actually been closer to 20,000 years and the Earth is very different from when they left. The flora and fauna has drastically changed, adapting to match Godzilla's genetic footprint. This puts more dangers on the planet, like nasty bird-dinos and razor sharp plants, that the humans have to battle. And then there's Godzilla, looking just like he did when humanity left, ready and rearing for a fight for the planet. It's now or never before all hope is lost.

As you can see from the setup, all the fun city-smashing that is a key part of the series is gone. After 20,000 years there's no trace of civilization left, just overgrown forests and a lot of nasty creatures. This leaves Godzilla essentially wandering a generic forest planet as if he was the last survivor of Endor, which greatly reduces the carnage on screen. Sure, there are a few action sequences, but it's hove bikes and mechs shooting at Godzilla, not the King of the Monsters stomping through giant building, laying waste to everything. What action we get is mild and lackluster. 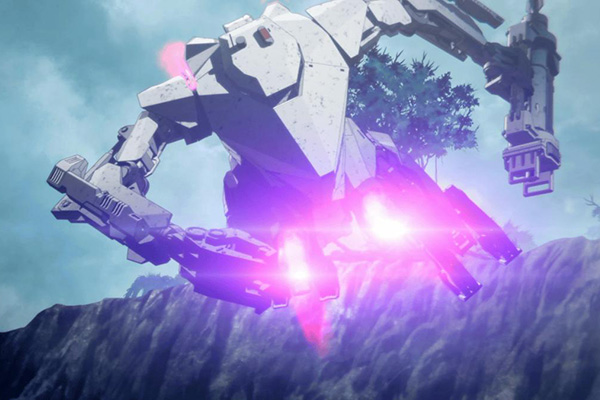 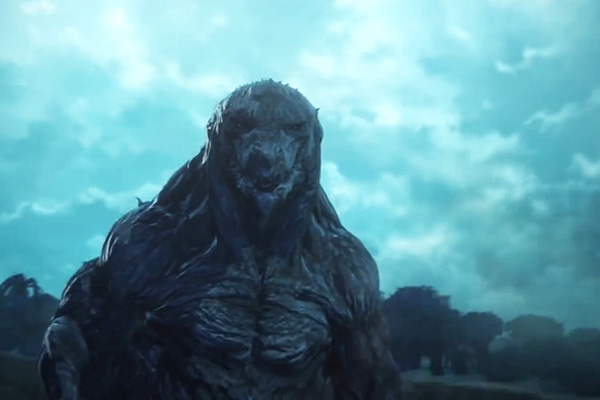 This also makes for a very passive Godzilla. The big green guy basically just wanders slowly around the planet, waiting for humanity to come to him. Without the worry of the beast showing up on the shores of a populated Tokyo (or New York City, or whatever), there's very little stress about where he is, what he's up to, or what will happen if Godzilla shows up. For a movie that's all about trying to kill Godzilla, the least interesting thing in the film are the moments when the film actually turns to Godzilla.

Not that much else in the film is all that interesting, to be honest. For starters, with have a generic cast of characters, most of whom are interchageable and hard to identify. Some of the blame for this liies with the animation where it seems like the production team only designed for or five faces and just swapped them onto all the models designed for the movie. Same face, new hair, over and over, which makes the characters hard to identify. Was that the sergeant in charge of the turrents, or the guy leading the hover bike squad? They look (and act) exactly the same, so I just can't tell.

But then their personalities are just as bland. Every character in the film, save three, acts like the same closed off military type. It's like a set of toy soldiers were cast and thrown on a table before animation, but they're all still the same guy. No matter the paint job and figurine style, each and every character uses "Soldier Personality A" meaning you can't tell who they are, nor care about their motivations. It's hard to get into a dense cast of characters when you don't care enough to identify them.

The three characters you can identify, though, really aren't much better. There's Captain Haruo Sakai (Chris Noisi in the English dub), a gruff renegade with one goal (and one personality trait): to kill Godzilla at any costs. His character starts and ends with this, and for the entre length of the movie he'll yell about this every chance he gets. Aiding him is Yuko Tani (CHristina Vee), a girl who, I think, is in love with Sakaki. I'm not sure of this because the film never really explains their connection; she just sends him a lot of long, lingering, unreciprocated looks, so either she's in love with him, or his sister, or both. Finally there's Metphies (Lucien Dodge), an inscrutible alien who serves as a guide for Sakaki. By the end of the film we have yet to find out their true motivation, why they're backing the obvious out of control Sakaki or what their true desire is back on Earth. Nothing is ever explained. 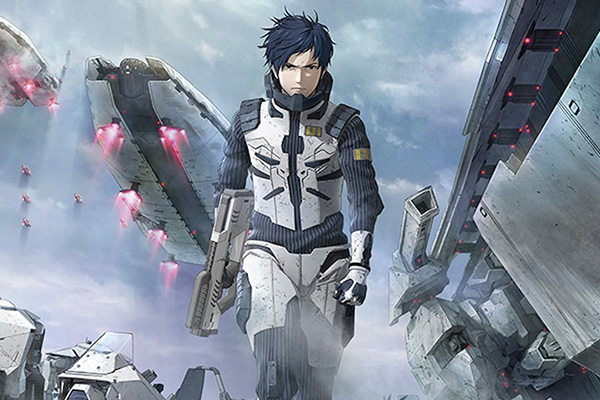 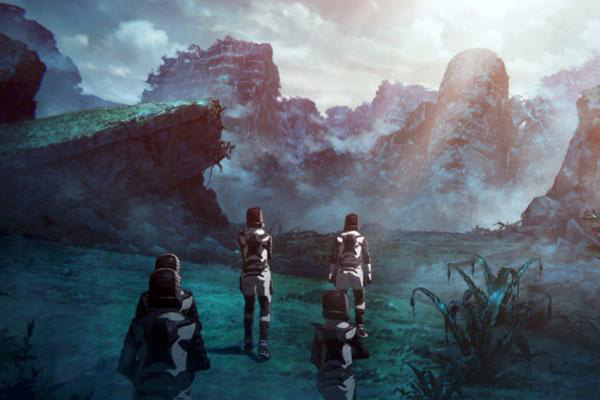 The film spends a lot of time on the build up to the battle with Godzilla, and that battle is... okay. There's a lot of technobabble leading up to it, many stern looks from the characters as the see the big, green menace, and then an action sequence that does go on for a while as the humans put their risky plan into motion. We certainly understand the goal of the mission really well, but what's laking is heart. There's no heart in the characters, no soul in the mission, and no reason to be going through any of this. It's a hollow act on a boring planet, and it just goes on and on for an hour-and-a-half.

Really, the best thing that can be said about Godzilla: Planet of the Monsters is that it looks good. The thought of a Godzilla anime put me in mind of a cheap Filmation flick, something on par with the rubber suits and cheesy special effects of the old movies. Instead we got a pretty slick CGI affair, much better animated and rendered than it had any right to be. This isn't the prettiest film I've seen -- it's very grey, very muddy -- but it's still decent enough to look at that I didn't hate the art as well as the story.

On the whole, though, this film feels like a complete waste. Humanity spins its wheels for 20,000 years, goes right back where they were, accomplish very little, and still have a long way to go. Such a rousing story. Only two more of these Netflix/Toho productions to go.