Come With Me To the Halls of Valhalla

I don't know if the era of "prestige TV" is still a thing. The term is still thrown around now but it came from an ear when cable networks were starting to put out shows that not only were able to compete with the best of Broadcast Television but even had a certain air of theatrical quality to them. I think of shows from AMC like Mad Men, Halt and Catch Fire, and the early episodes of The Walking Dead. AMC, frankly, was prestige TV for a few years there, but it wasn't the only source of shows that could garner that title. The History Channel, of all sources, had their own prestige series they trotted out: Vikings. 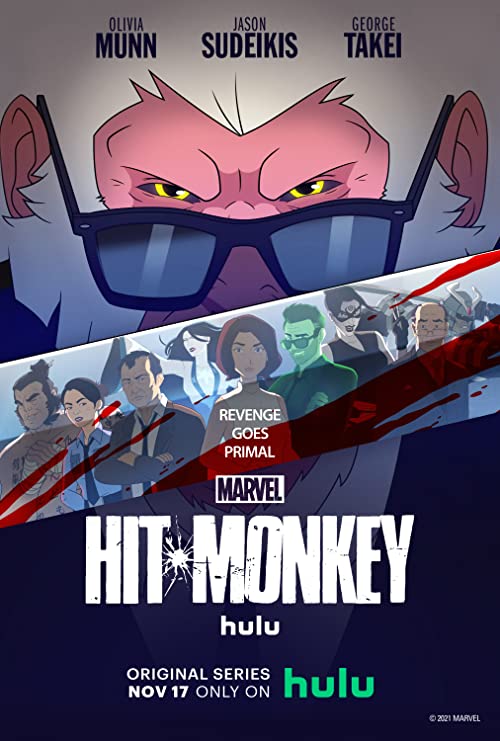 Vikings was an interesting series, a show made with all the trappings of a proper period drama, but one done on the small screen. Oh, and because it was on the History Channel is had an air of "educational" formatting, a thought that this might be a pretty historically accurate show. It wasn't, not really, but that didn't stop it from being a bloody, violent, awesomely good time, at least for the first couple of seasons or so. Following the rise of Ragnar Lothbrook, his sons, and the empire they build in Norway and England was very interesting. Once Ragnar left the series (due to the character coming down an acute case of historically accurate death), though, it felt like the series ran out of steam. His sons weren't as interesting as Ragnar, and the show just kind of puttered along for a while telling tales that never lived up to the power of the early seasons.

After six seasons Vikings ended its run. That didn't mean the franchise as a whole had to end, though. The production company behind the original series, Metropolitan Films, as well as MGM and History, were interested in extending the franchise but, for whatever reason, didn't decide to air it on History. Instead this new entry in the franchise, Vikings: Valhalla, made the move over to NetflixOriginally started as a disc-by-mail service, Netflix has grown to be one of the largest media companies in the world (and one of the most valued internet companies as well). With a constant slate of new internet streaming-based programming that updates all the time, Netflix has redefined what it means to watch TV and films (as well as how to do it). to get added to the stable of "binge on the weekend" shows. The good news to report is that the switch between networks didn't alter the overall quality of the production. This is just as handsome, and well produced, a season of television as the original six season run. If you came into this as a fan of Vikings, having made it through all six seasons, then you'll find more of the same to entertain yourself here. The issue is that despite a time jump and new characters to focus on, this series really does feel like just more of the same.

Set 100 years after the reign (and fall) of Ragnar and his boys, Vikings: Valhalla follows Leif Erikson (Sam Corlett), his sister Freydis Eiriksdottir (Frida Gustavsson), and their friends as they get mixed up in the political machinations between the Vikings of Norway and the royals in England. As we watch, the old king of England, King Aethelred II (Bosco Hogan), sets his men to kill all the Viking settlers on the isle of England, wiping them from the land completely. These were peaceful settlers, mind you, having been there for decades, but England was for the English, as the king thought, so the Vikings had to be slaughtered. This action sets in motion a new for justice from the Vikings, with Harald Sigurdsson (Leo Suter), Prince of Norway, leading the call for vengeance. He's backed by his brother, Johannes Haukur Johannesson (Olaf Haraldsson) as well as King Cnut of Denmark (Bradley Freegard).

Into these plans for war wanders Leif and Freydis on their own personal quest for revenge. It seems that back in their settlement in Greenland a man had come to their village. He found Freydis there, young and alone. He knocked her unconscious, tied her down, and raped her, all because she was a "pagan whore" and he was a "good Christian". Then he carved a cross into her back to remember him by. After that event, Leif and Freydis tracked the man back to Kattegat, the one-time seat of power for Ragnar, to kill the man. They get their revenge, but for this "unprovoked attack", Leif has to aid the warriors in their battle against the English (because Leif is the best damn boat captain they have). Thus Leif ends up mixing into the history of the Vikings and aiding them in their eventual assault, and occupation, of the British isle. 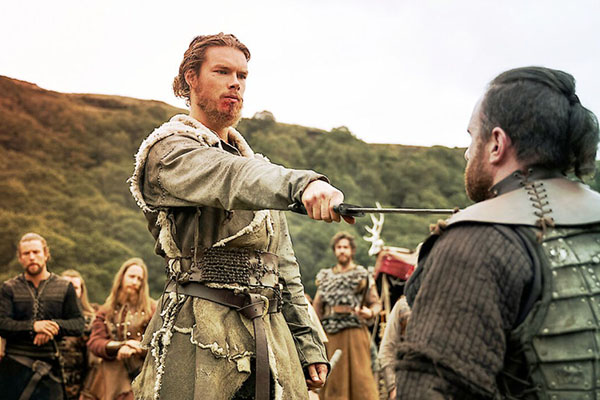 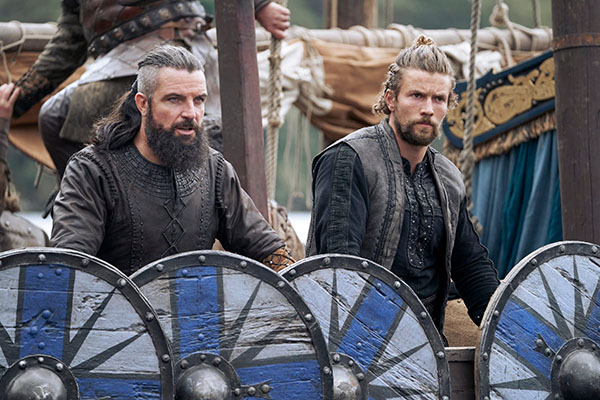 Working to the series's benefit is, naturally, it's high production values. This show is quite well put together, featuring (at least what look like) period appropriate sets and costumes, giving this all quite the air of historical accuracy. I dunno if you'd really feel like you're "there in the Viking Age", but it's about as good as you're going to get for a show on TV, that's for sure. The show is a clear labor of love for the production team, and it shows in thee quality of the production values, certainly.

That said, the production values are the best thing the she has going for it. In just about every other regard, though, this season of Vikings feels like a real step down, and we have to start in that regard with the story. The basics of this first season of Valhalla amount to Leif getting swept over to England where he falls in with princes and kings of the Norse and the Danes, battling against the English for the fate of his people. If that sounds familiar it's because Ragnar in the original recipe Vikings got swept over to England where he fell in with princes and kings as they battled the English for the fate of the Viking people. Same base story, 100 years later.

Now, sure, there are elements that are different. Leif and Freydis don't act much like Ragnar and Lagatha from the original show. Some of the battles are different, with a climactic battle on London Bridge being a particularly good action sequence. These are moments and specific characters while the broader strokes of the series feel all too familiar. We jumped 100 years ahead but very little has actually changed. Maybe that's historically accurate but it doesn't exactly make for thrilling television.

At the same time, characters outside of Leif and Freydis barely have any personality, or weight, to them at all. Leif has a group of friends he travels with who, one by one, get sent to Valhalla as their cards are pulled. I can't remember any of their names, though, nor did I care when they died. Similarly, all the Danish and Norse princes and kings, their stories, their actions, barely rose to anything really worth caring about. Just people moving the deck chairs around endlessly while attention was pulled away from Leif and Freydis. It's all so much padding. 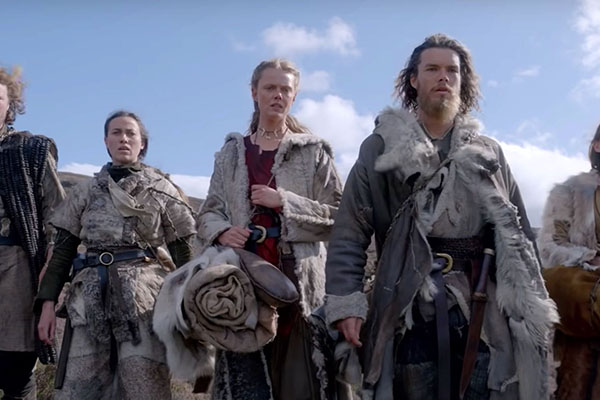 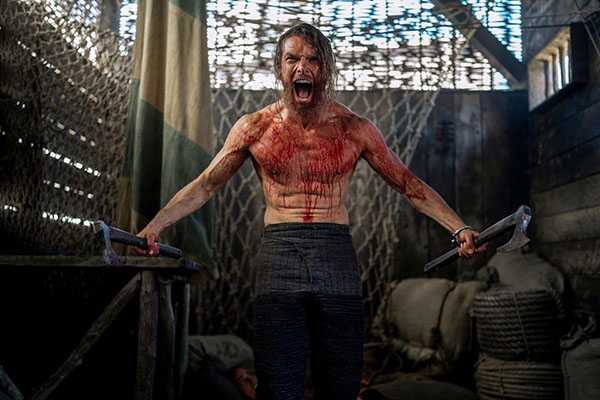 Watching through the series it was all very fine in the moment but hardly memorable after the fact. The season was ten episodes long but I can barely remember 30 minutes worth of the season that actually felt interesting. It's a lot of fluff, a lot of padding, with things happening very slowly. Overall, though, it was just a ten-episode time filler while I waited for some other show to come along that I could binge instead. Nothing about Valhalla was bad but that doesn't really make it good either.

Frankly, this was the same issue I had with the latter seasons of Vikings. As more characters were introduced, and more attention was pulled away from Ragnar (or, when he left the series entirely in the back-half of the run) the show really just lost its momentum. Despite being set 100 years later nothing really has changed about the production team's approach to Valhalla. It's just more of the same story, the Danes and the Norse attacking the English all as a means to have some very big (but not historically accurate) battles. It's cool in the moment, but paper thin once you try to think about it. Vikings: Valhalla is all flash but no substance, a handsome show with very little actually going on underneath.