Aladdin and the King of Thieves

The Disney Aladdin cycle was actually pretty involved and complex. Along with the original film, released all the way back in 1992, there was the sequel, The Return of Jafar, the television series that spun out, and then yet another film, and all of this was in continuity. Hell, eventually the franchise crossed over with Hercules, as little sense as that made. 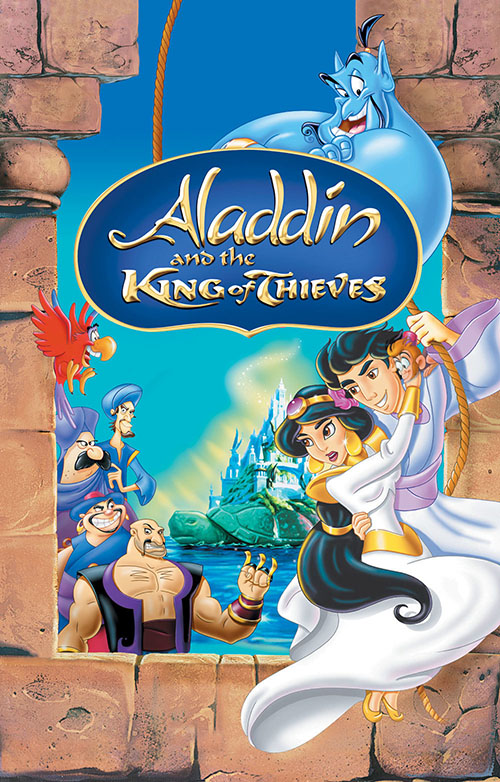 To get there, though, we have to get through this third and final animated film in the set, a sequel and series finale for the Aladdin TV show. Aladdin and the King of Thieves marks something of a victory lap for the series, not only a successful made-for-TV film to cap a three season TV series (which, in Disney fashion, essentially aired all its episodes in a single year), but also a celebration of the fact that the Genie was back in his proper form: Robin Williams. It's everything Aladdin needed to go out with a bang (at least until Will Smith donned the roll of Genie for the 2019 live action remake.

That regard it works. It's tolerable. It's a perfectly passable way to spend an hour or so with a child watching characters on screen. I suppose, when it came out, if you were a child that had watched the whole of Aladdin: The Series this film might even feel like a big deal. All these years removed, just coming in to watch this film after I tried to get the awful flavor of The Return of Jafar out of my mouth, I was pleased to see something that was actually halfway watchable. Make no mistake this film isn't nearly as good as the first movie in the series, but considering how bad he films could (and did) get, this was a marked improvement.

The movie starts with the marriage of Aladdin (Scott Weinger voice, Brad Kane singing) and Jasmine (Linda Larkin voice, Liz Callaway singing). The city is in celebration mode, with the charge for party and cheer led by none other than Genie (Robin Williams, taking his role back after Dan Castellaneta ran it through the TV series). Aladdin, happy as his is to finally get married, is a little sad, though. All he ever wanted (apparently) was to know who his family was. He even had a dagger stashed away, a gift from his father when he was a newborn, and apparently his most prized treasure in the world. Sadly, both his parents were dead, he thought, so there was no way to regain the family he lost.

Quite conveniently the actual wedding ceremony is interrupted by an attack of the 40 Thieves, lead by the King of Thieves (John Rhys-Davies). The thieves, along with stealing everything they could get their hands on, were also there specifically to find one treasure, a Staff of the Oracle that, when used, would grant each person the answer to one question and, wouldn't you know it, the staff was, for some reason, a wedding present for Al and Jas. What did the King of Thieves want to know? Where the greatest treasure in the world could be. And when Aladdin asked about his own issues, specifically what happened to his father, he finds out that the King of Thieves, Cassim, was actually his father. This sends Aladdin on a journey to save his father from his criminal life and, just maybe, to end the reign of the 40 Thieves once and for all. 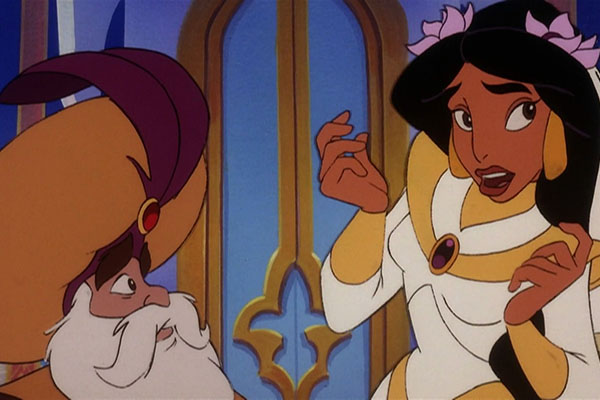 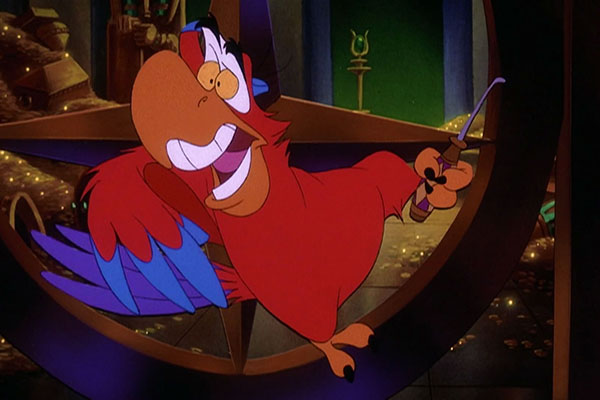 The main draw for this film is, without a doubt, the return of Robin Williams to the role of the Genie. It really is night and day his performance in comparison to the one Castellaneta gave in The Return of Jafar. That's not meant as a knock on Castellaneta for the work he may have done in the TV series -- I don't know how well he grew into the role as we didn't watch this for the franchise overview -- but Williams is just so much more natural in the role it does feel like the Genie properly returned in this third and final animated film. It's just right.

That said, Williams didn't put quite as much into the role this time around. Without having hard numbers in front of me (unlike with Return of Jafar where you can find out how much it cost to make that movie, I can't find a definite budget for King of Thieves) my guess would be that the producers brought Williams in for just a couple of days of work (instead of paying him a ton and letting him record as much as he liked), then used whatever they had from his few takes to cobble together something decent. It's still a funny performance, with a few really good jokes indeed, but it doesn't feel as lively, vibrant, or interesting as Genie in the first film.

One big problem with Genie this time around is that he leans heavily on impressions and referential humor. The original film had plenty of impressions, and the occasional Disney joke, but this one is basically overstuffed with gags about Disney, jokes about the characters, Genie acting like other Disney roles, and even dressing Jasmine up as other Disney princesses. This film sees to mostly revel in the fact that it's a Disney film first, and whether that was because that was all Williams could think of or that was what the producers wanted, it holds the humor back some. It's nice to have this Genie back, I just wish he did more to feel like his old self fully.

But then, the humor in this film in general is pretty stale. When the big, non-Genie gag in the film is one of the palace guards getting the phrase "open sesame!" wrong and saying "open caraway!", you know you're in for a pretty dire time. The creativity of this film is pretty low in general, with a marginal, fairly liner plot that has all the usual twists and turns you expect from a Disney film. Cassim leads a band of thieves that feels like it was ripped out of Peter Pan, there's one bad guy who is obviously going to betray everyone, and most of the material, story, and humor is derived from slapstick and general silliness. It is exactly what you'd expect from Disney direct-to-TV fare. 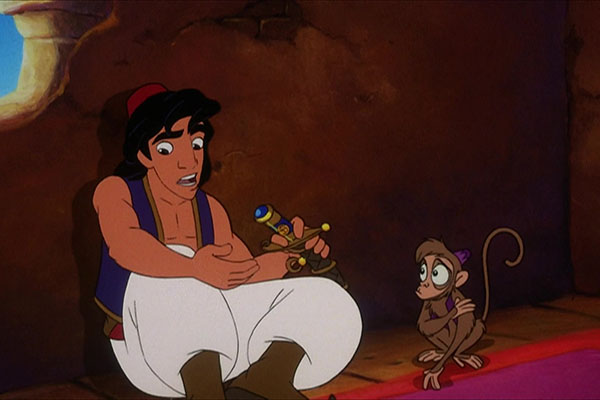 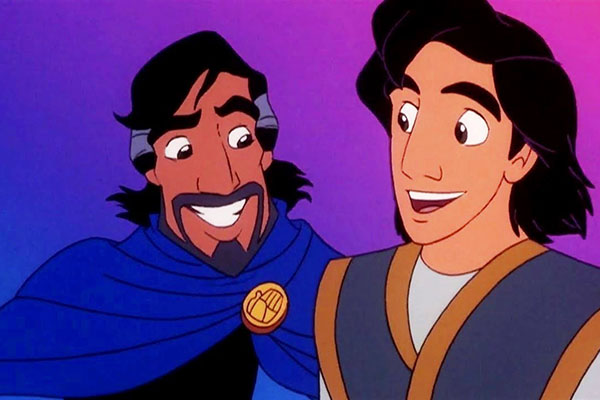 That doesn't make it unbearable, it's just not anywhere near as interesting as the original film. Its animation isn't as good, the acting is okay, the songs are fine, and it all feels like the standard Disney made-for-video feature. It's bearable, even passable, time but it's not great. It feels right in line with everything made for the franchise after the first film: a copy of the original that still manages to miss the full magic of what came before, just iterating on what it knows works while it moves the deck chairs around as hard as it can.

It's hard to imagine a sequel that truly could compare to 1992's Aladdin. That film had just to right mix to be truly magical. This film had no hope of duplicating that, especially not on a shoe-string budget and after the the damage of The Return of Jafar. Aladdin and the King of Thieves didn't really have a chance to be a good film, all things considered, but it's about the best it could be considering the mess it inherited. It's decent, just don't expect greatness.