Journey to the Center of Tedium

And here we are, at the end of the 11th season of Mystery Science Theater 3000First aired on the independent TV network KTMA, Mystery Science Theater 3000 grew in popularity when it moved to Comedy Central. Spoofing bad movies, the gang on the show watch the flicks and make jokes about them, entertaining its audience with the same kind of shtick many movies watchers provided on their own (just usually not as funny as the MST3K guys could provide). It became an indelible part of the entertainment landscape from there, and lives on today on Netflix.. This first season of the NetflixOriginally started as a disc-by-mail service, Netflix has grown to be one of the largest media companies in the world (and one of the most valued internet companies as well). With a constant slate of new internet streaming-based programming that updates all the time, Netflix has redefined what it means to watch TV and films (as well as how to do it). revival of the show has had its ups and down but, over the course of the season there have been more ups than downs. Sadly, the show doesn't exactly end on a high note. Last week's episode, The Christmas That Almost Wasn't, was a wretched affair and this week needed to be much better to send the season off in style. Spoiler: it fails to do so. 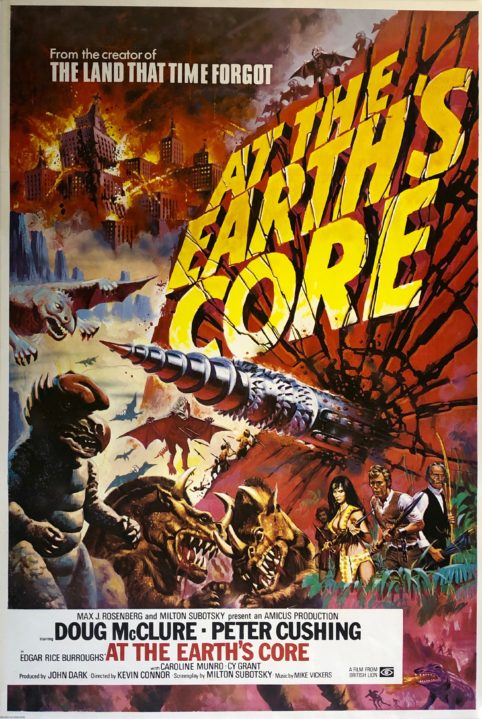 The fault really lies at the feet of the film. At the Earth's Core is a dire film, boring and tedious with truly horrible effects, made only worse by the fact that we already had another movie just like it -- The Land that Time Forgot -- during the season. That film was made by the same production company and both of these movies star Doug McClure. Although the basic plots are different, the two films fee so similar in style and approach that you can't shake that "same-y" feel the whole time you're sitting through it's tedium.

At the Earth's Core follows the adventures of two late 1800s explorers, Dr. Abner Perry (a slumming Peter Cushing) and David Innes (McClure), as they take a drilling machine -- the Mighty Mole -- into the Earth. Their journey was just supposed to be a test of the device but things immediately go awry and the two end up digging deep into the Earth, burrowing into a deep cavern far under the mantle where an entire culture thrives. There they get captured by the evil Mahars, telepathic bird creatures that keep a group of humans in perpetual slavery. The two explorers will have to find a way to break free of their captors, liberate the other humans, and then stop the Mahar menace once and for all. Oh and, of course, there's time for love with a Princess (as this is based on an Edgar Rice Burroughs novel) before the two heroes leave for the surface once more. It's all pretty rote and basic.

I'm not going to pick apart the bad science of this film, which would be easy to do. Obviously this is based on a novel written in the early 1900s back before we really knew what lurked beneath the Earth's surface (spoiler: it's magma, not a whole other civilization). This story is a lot like other Rice Burroughs novels, such as the John Carter of Mars series which dreamt of fantastical realms just outside of our reach with big, gruff, white heroes traveling there, saving civilizations and bedding princesses. It had a formula and this movie honors the original story, following the basic beats outlined to craft it's script. I can't pick on the bad science of the film because it's meant to be a throwback to that early era and I respect them leaving it as it (despite how stupid the setting is in retrospect).

That said, this movie doesn't get a pass in any other respect. Why the story is obviously silly from a geological and physical perspective, it's also just bad. There really isn't much of a story in the film at all -- the guys show up, get captured, run around a bunch, and then leave. They're in exactly the same place, emotionally, at the end of the movie as they were at the beginning and while, yes, they do stop some evil villains, it doesn't really change much of anything for them. It's a hero's journey where the heroes -- end up on a quest, travel to a place, do some deeds, grow as a person, and then leave to take those lessons back home -- where the heroes are already fully formed, learn nothing from the experience, and go back home the same as they were before. The actual journey, the whole point of the movie, is meaningless. 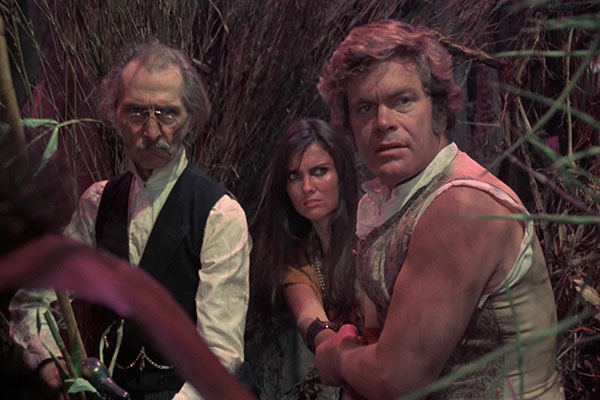 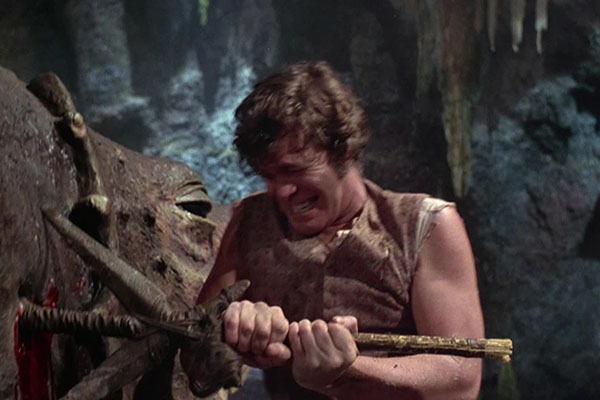 Without strong heroes, ones that can actually change and evolve, the movie has to rely on its setting and side characters to carry the day and, here too, the film falls on its face. This is largely because nothing is ever actually explained in the movie. We have to races, the humans and the Mahars, battling for this underground cavern but we don't actually ever learn what it is the Mahars want. Why are they enslaving humans? What is their purpose? And how did humans -- ones that can speak the Queen's English, no less -- end up in this cavern when, from everything we can see, the drilling machine our heroes use is the only way in or out? If you want answers to any of these questions you'll probably have to read the original book (if they're even in there) because they aren't provided in the movie.

But then a lack of solid story or setting is par for the course with an MST3K flick; if the movie were good it wouldn't be featured on this series. What makes this film so dire, though, is just how long it takes for anything to happen. Sure the heroes run around a lot during the action sequences (of which there are a few) but for the most part its them sitting around, watching things happen during long establishing shots. Over and over the MST3K crew has to fill with jokes and songs to cover how much dead space is in this film. They do it well, mind you (especially in the opening credits where they invent an entire song to sing over the theme music), but there's only so much you can do to patch over a truly tedious film.

Even the people in the movie seem bored by the proceedings. Cushing, for example, turns in an absolutely terrible performance, a squeaky voiced affectation over a meaningless character. When he can even be bothers to be in scenes he's mediocre at best, and then the rest of the time he's off stage somewhere, trying to call his agent about the dreck he's in. Much of the movie focuses on McClure and his love interest, Princess Dia (Caroline Munroe of Starcrash), and neither of these are great actors by any stretch. Munroe has the small part of the two but she's at least able to vamp her way through it. McClure, though, is just a boring slab of beef and his character never rises to the role given. It's a train wreck.

The MST3K crew tries the best they can, finding good jokes here and there to make at the film, little snatches of musicality and comedic skits they can do, but there's just not a lot to work with. Plus, the skits outside the movie, mostly focusing on the Wedding of Kinga and Jonah, just aren't amusing. This was a plot line the show has been building up but it never really works. The season ends on a kind of cliffhanger (that, spoiler, is hand-waved away at the start of the twelfth season), leaving this whole episode feeling like a sad bit of filler more than anything else. 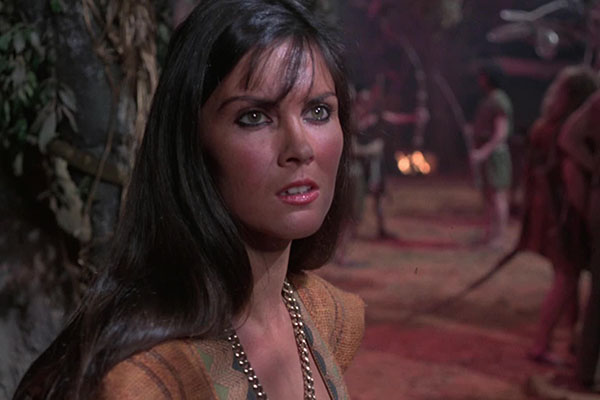 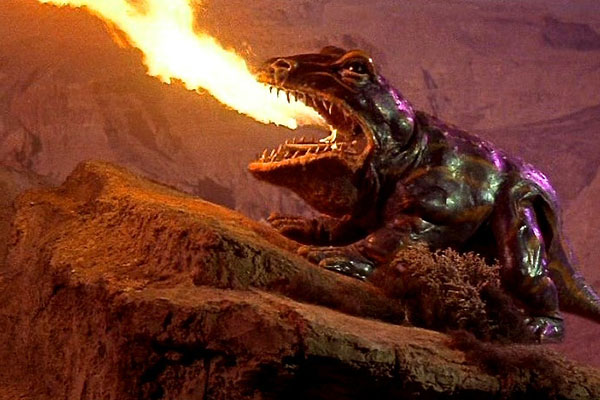 The back half of this season really does feel like it falls apart. There are a lot of good episodes in this run (Reptilicus, The Land that Time Forgot, Yongary, Monster from the Deep) but there aren't enough hits to balance out the misses. By the end of the season the show felt like it was running on fumes. This might be part of the reason why season 12 was pared down to just six episodes. Having now gone back through this season I think that was the right call. It's nice to have MST3K back, but some parts of this season felt like a real chore.