Slide On Down That Mountain

Ahhh, now we're finally talking. After a couple of really stinky episodes (Cry Wilderness and The Time Travelers), Mystery Science Theater 3000First aired on the independent TV network KTMA, Mystery Science Theater 3000 grew in popularity when it moved to Comedy Central. Spoofing bad movies, the gang on the show watch the flicks and make jokes about them, entertaining its audience with the same kind of shtick many movies watchers provided on their own (just usually not as funny as the MST3K guys could provide). It became an indelible part of the entertainment landscape from there, and lives on today on Netflix. is back on track. That's not to say Avalanche is a good film (because this is MST3K, after all), just that this film provides enough good fodder for Jonah and the Bots to work their magic in style. 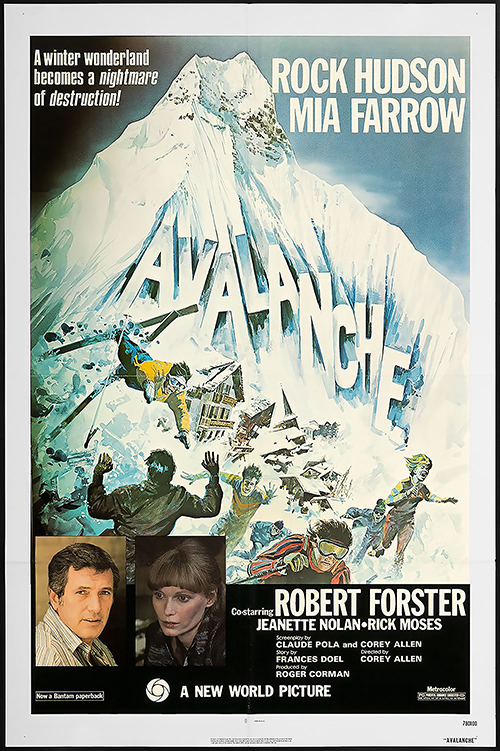 For those unfamiliar, there was a time when the Disaster Movie genre was big money at the Box Office. Movies such as Airport, The Towering Inferno, and The Poseidon Adventure were huge hits and inspired a whole lot of pretenders. Avalanche came out during the tail-end of the genre, an also-ran that tried to get by on the disaster movie thrills with a tiny budget. It's essentially a mock-buster of the genre, produced (naturally enough) by Roger Corman, king of low-budget schlock. It has all the hallmarks of the genre with none of the flair or style that made more well-known titles so successful at the box office.

The first sin Avalanche commits is that it makes its audience wait for the big spectacle to happen. Clearly, as a low-budget Corman film, there wasn't a lot of money to spend on special effects, so we're treated to a full two acts of build up where we learn about David Shelby (Rock Hudson) and his new ski resort he built on an unsafe mountain. The resort project was rushed through with bribes paid at all the right levels to get the resort approved. While this was going on, his marriage to Caroline (Mia Farrow) fell apart; David is hoping that the grand opening of the resort will be the perfect time to rekindle their romance. Caroline, though, has other ideas... as does the mountain.

Look, we don't come to disaster movies to learn about a bunch of characters (and there are a whole ton of characters in Avalanche that aren't even worth recounting because they barely have stories and are just there to stretch the first two acts out over an hour). We're here to see a big disaster and the longer you make us wait the less we'll care. Sure, it's good to establish stakes but once we know who the players are and what the disaster is going to be (spoilers, it's an avalanche of snow), we want the movie to give us the goods. We go to a slasher film to see teenagers get offed one-by-one and we go to a disaster movie to see a disaster. No one cares about David, Caroline, their failed (and tedious) romance, or anyone else that shows up to waste time and then die in the snow.

Worse, though, is the fact that the titular disaster is blink-and-you-miss-it event. Realistically, snow sliding off the mountain is going to happen pretty quickly and, fair enough, the film depicts this just like it should. The avalanche happens, it catches a lot of people in a five minute span, and then we're left trying to dig survivors out. The problem is that we only get the one disaster and then it's just a lot of hand wringing until the movie ends. It's not as if a second avalanche could happen after the climactic event (they were clearly saving it for a sequel that, thankfully, never happened). Thus, most of the movie is build up or let down; very little of it is focused on the action. 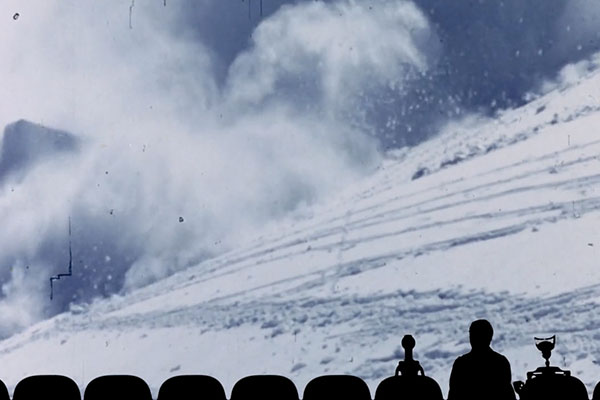 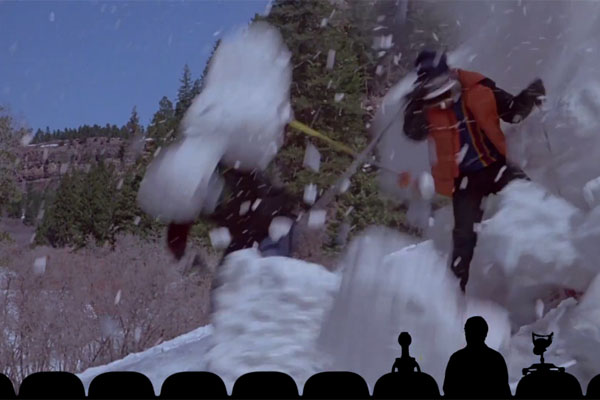 Really, that's an inherent flaw in the kind of disaster chosen for Avalanche. Disaster movies work best when we get a threat that can crop up, over and over, through the course of the movie. The Towering Inferno gets a lot of mileage out of first causing the disaster (a hulking skyscraper that suddenly catches fire) and then putting the various characters in danger over and over as they try (and fail) to escape their fate. This is a pattern the best disaster movies follow, and it carries through even to modern titles like Independence Day, The Day After Tomorrow, and pretty much everything else Roland Emmerich has produced over the last twenty years. You can't just have the disaster be a one-off event; you have to string it out after the first attack, leave it lingering over the characters as a way to draw out the tension and excitement.

But then, this is a low-budget movie. Clearly the avalanche was chosen for Avalanche because an avalanche is a cheap effect to produce and, once its over with, there's no threat of another Avalanche avalanching it's way down the mountain. If you're trying to make a mock-buster that feeds off the disaster movie genre, an avalanche probably seems like an ideal solution. Film a big, climactic threat, put a lot of the good bits into the trailer, and then hope people don't realize all the action seen in the trailer is literally all the thrills to be had in the movie. It's a cheap way to make a genre film but it won't lead to great results.

That said, the movie might have been at least someone better if the film was populated by good actors. Clearly the production thought they could get by on the waning star power of Rock Hudson and Mia Farrow, but they didn't count on the two actors having zero chemistry between them. Worse, Farrow all but sleepwalks through her entire performance, leaving a giant hole in the lead cast. The only actor that shows any talent (or recognizable sat power) is Robert Forster who does his best with the underwritten role of Nick Thorne, photojournalist (and avalanche harbinger). The film wastes Forster's time as well as our own.

But then, this is another thing the movie really fails to understand: part of the joy of disaster movies, especially those of the 1970s, was in seeing recognizable stars put into stupid situations. Disaster movies of the era were cavalcades of B- and C-list celebrities and there was fun to be has seeing all these people mugging for the camera, having a good time. Avalanche, though, couldn't afford any of these kinds of starts (not once it wasted its meager budget on Hudson, Farrow, and Forster), so we get a lot of non-name people taking up space. There's no joy, no life to the film, and it makes the first two acts, and the back-half of act three, drag on. It sucks. 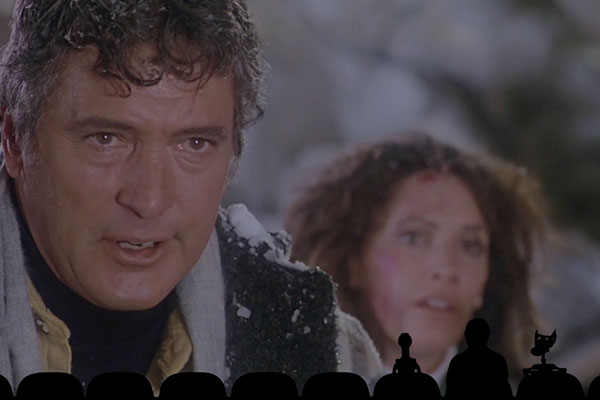 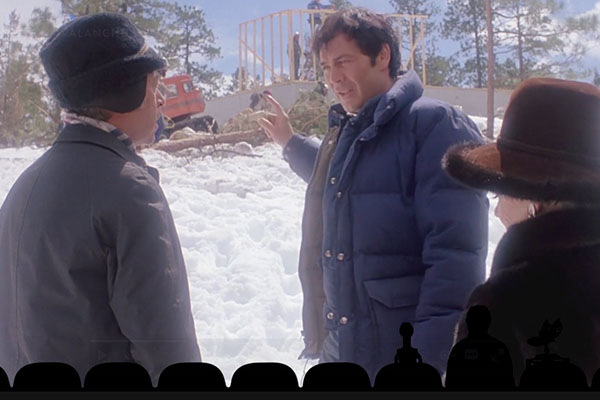 But while the movie Avalanche is awful, the episode of MST3K is great. There might not be anyone interesting to watch in the movie, but there's a whole lot of stupidity at work in all the scenes, which gives our crew of jokesters plenty of fodder to work with. The joke-a-second patter you expect from the team is in full-force here and it makes a dreadfully dull film quite watchable. I would have hated to be one of the people to see Avalanche in theaters, but I've enjoyed the episode both times I've watched it.

Just note that the mocking of the movie is honestly better than the skits around it. The best of the bunch is a musical number between Kinga and her long-distance beau (played by Neil Patrick Harris). These are two very charismatic singers, but the song just didn't thrill me. Nothing else in the skits caught my attention making the song the best by default. This is definitely an episode you watch for the movie not the skits. A solid episode over all, just one where I would probably skip past the skits to get to the good parts: the truly wretched movie.