After the actually halfway decent (all things considered) film from last week, The Beast of Hollow Mountain, we have this week's Mystery Science Theater 3000First aired on the independent TV network KTMA, Mystery Science Theater 3000 grew in popularity when it moved to Comedy Central. Spoofing bad movies, the gang on the show watch the flicks and make jokes about them, entertaining its audience with the same kind of shtick many movies watchers provided on their own (just usually not as funny as the MST3K guys could provide). It became an indelible part of the entertainment landscape from there, and lives on today on Netflix., Starcrash which is just awful. This is a movie that you had to think even the MST3K producers were like, "this is just cruel." It might not be Manos, but it is pretty darn close. 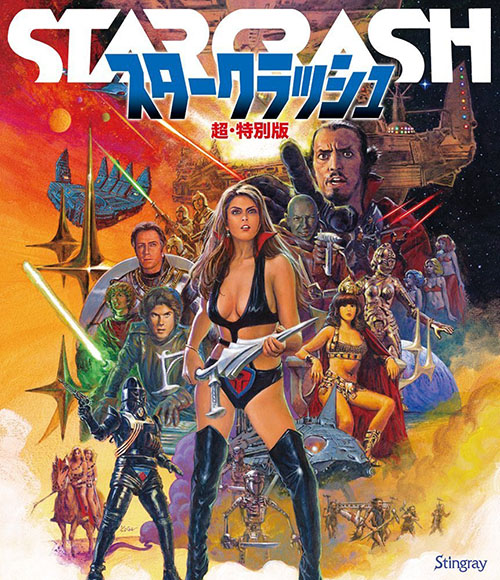 What makes Starcrash so terrible is that it has such an incomprehensible plot. In short, there's a good Empire and a bad empire and the two are, apparently, at war (although why they're fighting, what caused the conflict, or even what the boundaries of their regions are in space, aren't ever explored). In the middle of this conflict we have Stella Star (Caroline Munro), a smuggler and, supposedly, the best pilot in the universe. She, along with her navigator, Akton (Marjoe Gortner), are forced to aid the "good" empire (after being arrested for their smuggling activities). Stella and Akton are needed to go on a search and rescue mission to find three lost crafts that were searching out the Evil Empire's deadly weapon. Or something. It's all a really cruddy blur from the mid-point on.

Part of the issue with the story is that nothing is ever really explained. The crew is supposed to be searching for this super weapon, but to do it they bounce from one unremarkable planet to another where things happen but nothing ever really gets done. All the real plot movement happens by characters unrelated to the lead cast and then everything is explain afterwards as if it all made sense. For a space sci-fi adventure film, there's a lot of telling instead of showing, and it's all done with overly-long info dumps where everyone in the cast, and the audience, very quickly tunes out.

Even then, the actual adventure could have been wrapped up in fifteen minutes. The heroes go to a planet, see the super-weapon isn't there, and then head off to the next one. There's a reason movies take the narratively convenient path of having the heroes quickly stumble onto the deus ex machina since it keeps the plot moving forward. Starcrash takes the other (arguably more realistic) approach and spends the first hour of the film spinning its wheels until it finally gets to the "good" bits, and it's just as tedious as it sounds.

But then, just about everything in this movie screams of "padding for time". During a space battle a long montage off ships being launched is show. It goes on for minutes as ship after ship is launched out into space presumably to fight. And then none of them actually are shown fighting. The heroes will land on a planet to find the next objective, and then we'll be treated to long shots of them just wandering around, searching. Sequences go on, and on, without any real purpose behind them except to obviously get the runtime up so the film could be "feature length". 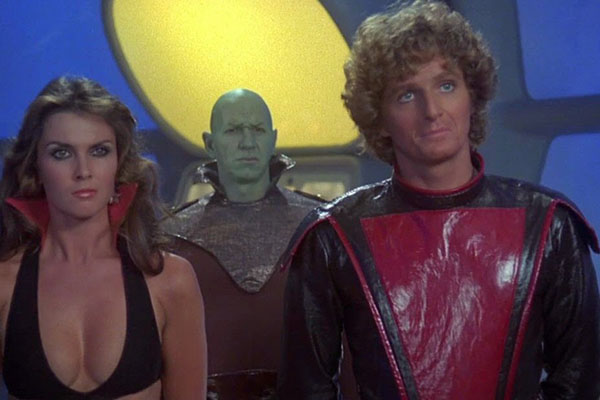 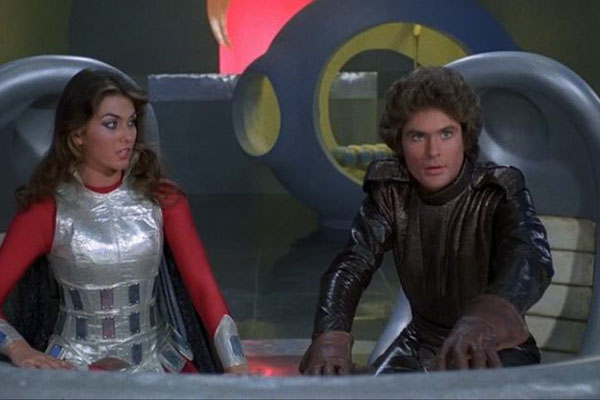 And there are the exposition dumps, the worst of which are delivered by Christopher Plummer. Plummer is generally a great actor but his performance in this movie is beyond boring. Actors have been accused of phoning in their performances for quick paychecks, but this is the first time I think I've ever seen an actor be actively asleep while delivering his lines. As the MST3K puts it during the film, it's like Plummer was being paid by the pause in his speech considering how many of them he takes. I was honestly tempted to fast forward through every one of his sleepy speeches and, if I hadn't been writing an article about this movie, I totally would.

But then that would have just left me to bask in the terrible acting delivered from the rest of the cast. You know you're watching a truly wretched movie when the best actor in the set is David Hasselhoff. Say what you will about The Hoff, but he should not be the high bar over which all the other actors in your movie aspire to reach. His performance is god-awful, to be sure, and yet when compared to the likes of Munro (who only ever has one emotion, smiling incompetence, as Stella) or Judd Hamilton (the robot with an inexplicable southern drawl), Hoff comes across as award-winning material. It's so tragic.

Everything about Starcrash is tragic, though. It's a poorly conceived film that doesn't really understand the language of the movie it's trying to make. It's a sci-fi epic launched right after Star WarsThe modern blockbuster: it's a concept so commonplace now we don't even think about the fact that before the end of the 1970s, this kind of movie -- huge spectacles, big action, massive budgets -- wasn't really made. That all changed, though, with Star Wars, a series of films that were big on spectacle (and even bigger on profits). A hero's journey set against a sci-fi backdrop, nothing like this series had ever really been done before, and then Hollywood was never the same. began and yet it feels like a throwback to the crappy sci-fi films of the 1950s and 1960s (you know, like another MST3K alumn, The Time Travelers. It wants to play in the same Flash Gordon serials-inspired universe that other, better sci-fi epics were able to ape, but it doesn't have the talent behind the camera to make that goal a reality. 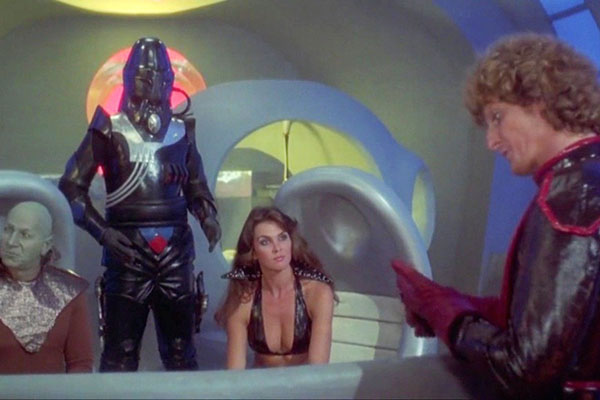 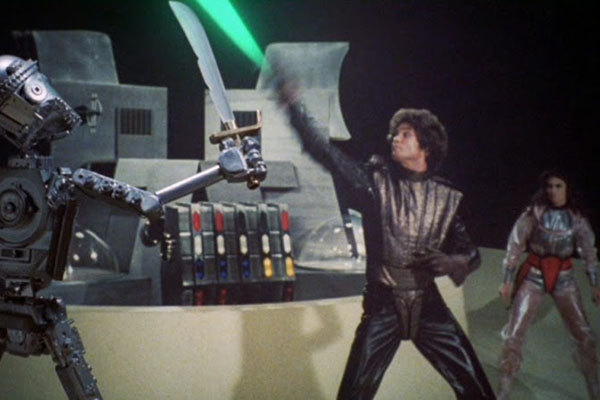 The fact of the matter is that even with Jonah and the bots commenting on the movie, Starcrash is an absolute slog to get through. It so poorly conceived, so badly written, and so epically tedious that the crew is only able to lift the film up so far with jokes. There are good moments but even they are few and far between. In the interim we're all forced to watch a terrible, boring movie.

It's not often I think this, but maybe Starcrash should have been left dead and forgotten. Jonah and the bots try, but this movie is beyond saving. For all but the die-hard MST3K faithful, give Starcrash a pass.