I won't lie: I'm not a huge fan of kaiju films. The whole concept of a monster movie -- a giant beast coming from some hidden lair where it's spent years living (or hibernating) in secret before emerging to destroy a city -- doesn't seem like a well you could hit multiple times without getting super repetitive. I say that knowing full well other people could say the same thing about Slasher flicks, a genre I love (and, hell, I've basically been making that argument as I've worked my way through the Friday the 13thOne of the most famous Slasher film franchises, the Friday the 13th series saw multiple twists and turn before finally settling on the formula everyone knows and loves: Jason Voorhees killing campers 'round Camp Crystal Lake. series). That's why there are a so many genres of film, so that anyone can find the type they like and enjoy the concept over and over again. 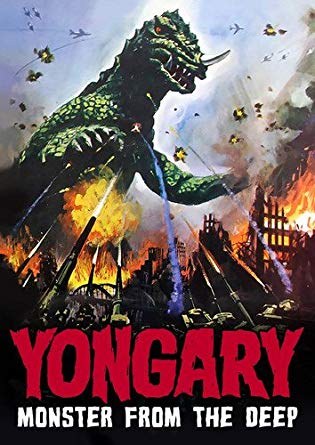 And I will credit Yongary, Monster from the Deep: it doesn't feel like your traditional giant monster movie from the usual sources. I've seen a fair number of Japanese kaiju flicks (largely from Toho), and a few of the U.S. attempts at their own monster films, but Yongary is different, in a way that feels distinctly Korean. Each Asian country has their own styles and attitudes that come across in their films and there's something about Yongary that makes it feel like it couldn't have come from any other country than South Korea.

Some of that might be because the heroes of the film have a very different view of nuclear power. Remembering that Toho created Gojira to work through their fears of nuclear war (Godzilla straight up leveling cities in an echo to the destruction Japan felt), the heroes of Yongary don't seem like the kind of people to shy away from nuclear power. One of the two male leads in an astronaut who helps monitor nuclear activity while the other is his friend, a scientist. Neither of them seem all that worried about the environmental effects of Yongary, just that he's a giant monster roaming through a city. It's a very different attitude from characters in various Godzilla films.

Also weird is that the characters waffle about whether killing the creature is a good thing or not. There's guilt and shame in their actions, something I've seen in a number of other Korean films I've watched. There's this weird attitude that holds personal guilt and shame over a loss of honor as major stakes in Korean films. Certainly I've seen enough movies from the region to feel like there's an odd thread to their works (people publicly killing themselves to spite those that have stolen their agency, as if this is the right thing to do) and it even seems to manifest in this silly little monster movie. Even after fighting off the monster, characters publicly lament their actions. "I know we had to kill him, but I wish he was here." No one is going to say that about Godzilla.

As a look at a different culture, Yongary is interesting. Seeing how they process the kaiju concept and use it to create a manifestation of their own horrors, is interesting. From a certain angle you could almost layer on a South Korea/North Korea angle to the story. It's a threat that comes out of a barren area of the country, attacks suddenly, and then has to be fought off. And yet, from a certain angle, you can almost find common ground with the monster. Then, when it's dead, by your own hands, you wish you hadn't had to so that. At the time this film was made, maybe that was their biggest concern. 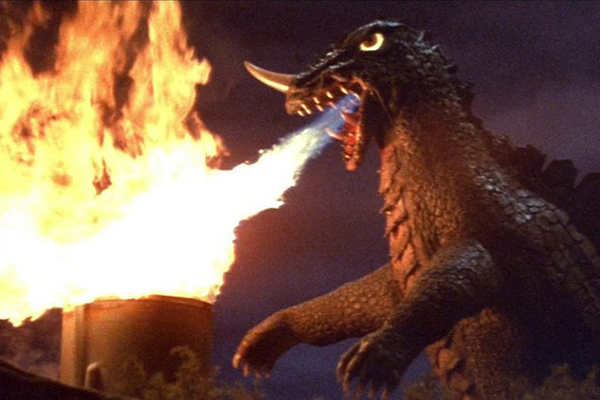 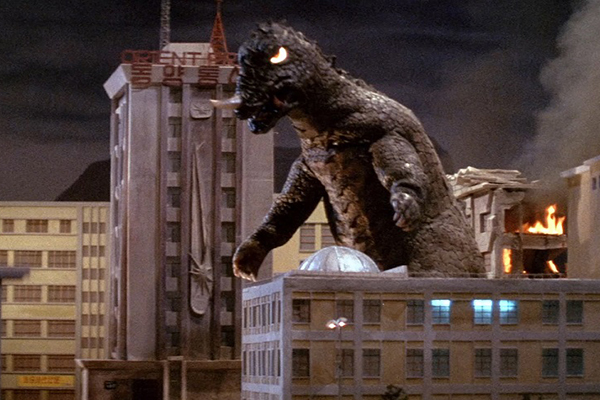 That said, as a giant monster movie, Yongary really sucks. The film is glacially paced, with a lot of time spent on building up a number of characters in the first act that have little-to-no bearing in the later sections of the film. An entire space program is established than then quickly discarded once the monster shows up. And then the film take a long time putting its characters in generic board rooms or labs, debating the monster without actually showing us the monster.

It's worst sin, though, is making the actual monster boring. This is the first kaiju film I've watched where the movie actually loses steam once the giant monster arrives. The film is truly an utter bore once Yongary is on the scene, spending a lot of time on reaction shots of people running without a whole of of wanton destruction in the process. Sure, the rubber suit monster looks pretty decent (for the era) and the miniature sets he roams around in are decent enough, but there's very little carnage in the movie and few thrills to be had from it.

Really, the big issue is just that the film didn't have the budget it needed to pull of this kind of low-budget film. Cut away shots to stock footage, static boardrooms, and the like are classic hallmarks of a film trying to bad its runtime and fill gaps from a lack of budget. We saw similar padding at work in Atlantic Rim (another Mystery Science Theater 3000First aired on the independent TV network KTMA, Mystery Science Theater 3000 grew in popularity when it moved to Comedy Central. Spoofing bad movies, the gang on the show watch the flicks and make jokes about them, entertaining its audience with the same kind of shtick many movies watchers provided on their own (just usually not as funny as the MST3K guys could provide). It became an indelible part of the entertainment landscape from there, and lives on today on Netflix. episode), and it worked just about as well there as it does here (it didn't, in either case). Sure, technically you can use those kind of shots to make a movie, but it's not a very fun movie to watch at all.

Tedium is a problem even the MST3K guys struggle with. Although the episode starts off really well, with the guys plowing through jokes at a rapid clip, their patter starts to taper off right around the point where the movie, too, runs out of steam (again, right when Yongary shows up). It's still funny in places, but their patter really only picks up near the end, once the giant monster is largely dealt with. Boring movies don't make for great episodes of the show, something Yongary clearly illustrates.

There are good moments in this episode, both in the theater and in the skits. I really enjoyed the invention exchange, and I laughed regularly at the skits about giant monsters throughout the episode. It's just a pity that the movie struggles so in the middle. The guys are good at what they do, but even they can't elevate a movie this tedious.