Well, I will give Mystery Science Theater 3000 credit: this certainly does feel like "The Gauntlet". We're only up to episode four of six and my soul has already died a little. Who knew that Mac and Me would be the high-point of a marathon of movies? Those are words I never wished to say before this. 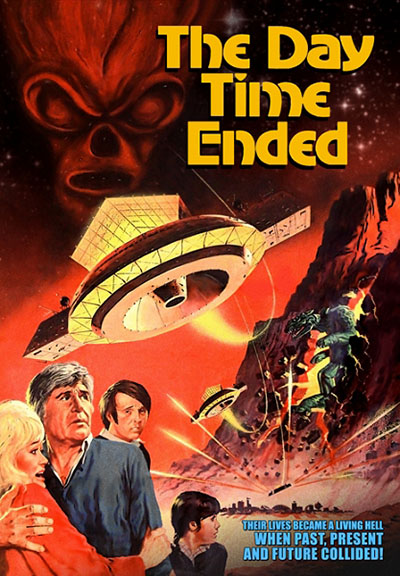 Today's cinematic travesty is The Day Time Ended, a 1980 film made on a shoestring budget by people that clearly didn't understand the process of making a movie. In the film, a family heads out into the Sonoran Desert to visit with their grandparents and see the oldies' new home. While there overnight, a lot of strange things start happening: and alien obelisk appears (and then shrinks down to tiny size so the granddaughter can carry it around), space ships fly overhead, giant monsters (stop-motion kaiju) battle out in the front lawn, and then the house itself is teleported back and forth across time and space. Why does all of this happen? Who can tell since the film never explains any of it.

And I'm not being hyperbolic when I say nothing gets explained -- literally things happen, stop happening, and then never occur again, only for the film to move on to some new event for no reason. You can kind of follow the storyline a little at the beginning as the granddaughter finds the obelisk and picks it up thinking it some kind of weird toy. A good alien comes out of it later and plays with her, and then evil aliens arrive and (sort of) attack the family. So far so good. But where do the kaiju come from? Are they working for either of the aliens or are they another race that's shown up? Or are they supposed to be dinosaurs and the production crew never bothered to look up pictures of dinosaurs?

The MST3K crew comment as such during the episode, singing a song (during one of the skits) about the "writing process" for this movie. It's a great, ragtime style number and clearly highlights the lack of any writing process for this movie. It's clearly a "let's just put cool things in this film, one after another, and people will eat it up." The only problem is the film didn't have a budget for "cool things" so the settled for whatever crap they could get quickly.

That's why most of the film is essentially a one-set bottle episode, with everything happening in and around the grandparents' home for no reason. That's why this whole cataclysm is implied to be world-shattering but we never see the rest of the world reacting to it. That's why time supposedly ends and yet the film just keeps right on trucking as if nothing has gone wrong. 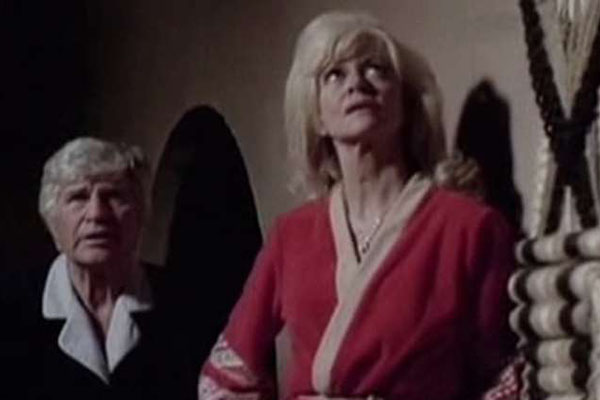 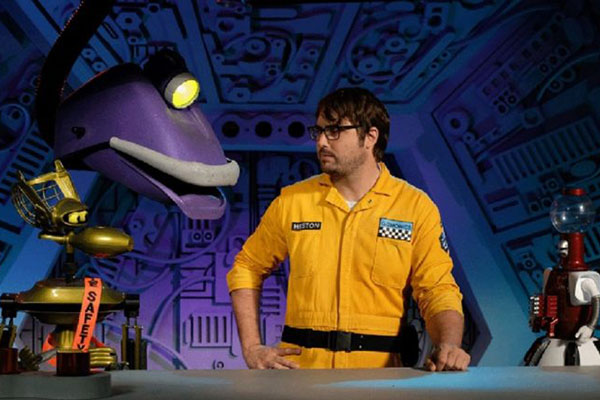 Although, to be fair, maybe time didn't actually end in this movie. Thanks to Wikipedia, I found that the film was originally titled "Earth's Final Fury", which is a great name even if it has as little to do with the actual plot of this beauty as "The Day Time Ended". During production the title changed to "Vortex" which is at least more accurate -- the house does seem to disappear into a dimensional vortex (mind you of the crappiest, most inexpensive kind they could afford). And then, somehow, it changed again to the final title. Clearly no one really had a clue with this film, and that shows in the story on screen.

But then it also shows with the actors, too. No one here really has any acting talent, reacting to what's happening on screen with the blandest, most generic reactions possible. If we're being kind we can acknowledge that this film was made in the early days of green screen and it was probably hard for the actors to act convincingly with this newer technology. That doesn't explain their awful performances during the rest of the movie, though. There's wooden performances and then there's the acting in this movie; inanimate mannequins have nothing on these actors.

I really have to wonder how it is that people get these kinds of movies made. As we go through this season and the movies seemingly get worse and worse, I have to wonder who would have willingly funded a terrible movie such as this (supposedly to the tune of $600 grand). Who saw the script for this movie, a cheesy knock off of 2001 and ever kaiju movie ever made and thought, "yeah, we're going to get asses in theater seats with this gem!" And it had to have gone to theaters, mind you, because the direct-to-video market wasn't a thing back when this was made -- video tapes were still a super-new technology that almost no one had. This wasn't bargain bin cheapie at K-Mart but something people thought would be a real movie? How sad is that?

Those are the thoughts I had while this boring movie played because, seriously, nothing happening in the movie was worth paying attention to at all (no matter how hard I tried). Thankfully we had the Mystery Science Theater 3000 crew there to help us get through it. While the movie was crap, the jokes the guys hurled at it were fantastic, including a few really good recurring gags (with one killer line repeatedly thrown at the barn itself). Plus we had that great song at the mid-way point, along with a pretty decent Invention Exchange (Fortune Meals are only okay, but I was very amused by the Spray-On Mustard Gas).

On the whole, then, this is a terrible movie but a great episode of Mystery Science Theater 3000. If anyone was actually able to enjoy this film back in the day (let alone sit through it without Jonah and the bots to ease the pain) I'd be amazed. Do yourself a favor and only watch it in this form -- this is one of the worst movies I think MST3K has ever covered before.