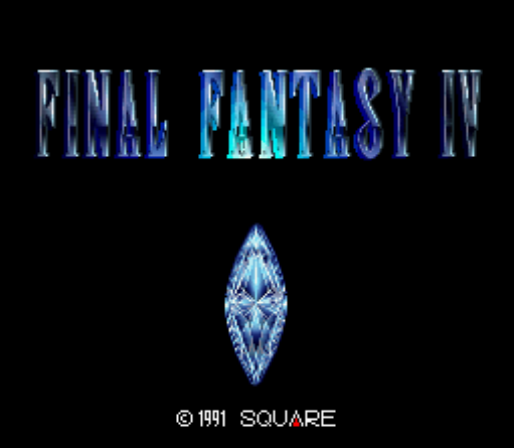 That said, when you look at it across all the main-line titles, the games have a much more subtle and natural evolution. Where the first game set the template, Final Fantasy II and Final Fantasy III experimented with the basic formula while still sticking pretty closely to the form. Certainly the NES Final Fantasy II feels like the most drastic departure in some respects, but it did also add in new ideas for classes, new weapons, new spells, and smoothed out a lot of the quirks of the original title. It provided that necessary stepping stone for the third game to then say, "this stuff here didn't work, but let's use the engine and the ideas behind it to give players more freedom of form while nailing the substance."

Of course, Final Fantasy IV is held up as a classic on both sides of the pond, and a lot of that is because it takes everything that came before and adds the needed polish (not just on the game play but also when it comes to the 16-bit graphics and sound) to make a real masterpiece for the series. Once you've played the previous games, though, you can see where the designers saw elements of each of the games and said, "yes, we want this for the next title." You have character representing (most of) the classes from the third game, the more story-driven plot from the second game, and the forced party comp from the first game (well, okay, you got to choose your party in the first game but then you were stuck with it for the whole game). And it all comes together in a plot the stretches not only across the world but deep underground and even to the moon of the planet we're playing on.

In the game you start off as Cecil, Dark Knight of Baron and captain of the kingdom's airship fleet, the Red Wings. You're sent on a mission to take the crystals from the land of Mysidia, but Cecil is already having doubts about what he's doing. He thought his kingdom was honorable but these recent actions, such as this specific mission, are anything but. When Cecil raises these doubts to his king, though, he's stripped of his title and sent on a delivery mission to take a package to the Village of Mist. However, that mission, too, is but another way for the King to attack a village as the package is secretly a bomb with Cecil the unwitting deliveryman.

What is going on and why has the kingdom betrayed its morals and its people? That's the question Cecil, along with the rotating band of adventurers he collects along the way have to answer as they first attempt to protect the crystals of the planet from being taken by the evil Golbez, and then work to defeat Golbez (and the monster behind the man) to save their planet and everyone on it. It's an epic quest that stretches larger than just about anything seen in the series up to that point.

The first big move that Final Fantasy IV does is dropping you right into the middle of the story. Sure, Final Fantasy II on the NES opened with your party of heroes immediately being attacked by a band on knights they couldn't defeat, and this leads them to being taken in by a kingdom and working for that kingdom to protect the world, but it's arguable if that was really a story. That game was more a series of glorified fetch quests that eventually led to a final boss (which, frankly, is really the plot of all three NES titles when you look at them).

Final Fantasy IV is different. It's as linear as the previous games, yes, but that's because the story is the focus this time. It's all about Cecil here, his path of redemption from Dark Knight lackey for an evil king to paladin and protector of the world. Where the other games put the emphasis on the mechanics (even Final Fantasy II, in its own way), this game takes customization mechanics out of your hands, adapting your party not based on what you want to do but on the needs of the story (by swapping your characters in and out based on their own storylines).

It's interesting and gives the game a very different feel from what came before (and that may be part of the reason why the next title, Final Fantasy V, kept the story-driven focus but worked back in all the mechanics this game was missing). The lack of customization options, though, doesn't strike me as a bad thing here, in this context. If anything, the fact that your part is constantly shifting from one set-piece to the next meant that I was forced to adapt, that I couldn't always rely on the same skills of combination of characters to get me through every encounter. Final Fantasy IV kept me on my toes and I found that I enjoyed it more for that.

It helps that this game is balanced differently from the previous titles. Where in the previous games I found I had to do a lot of grinding between set-pieces, forcibly getting my characters up to a point where they were ready to tackle the next challenge at a level the game expected, here I could just take fights as I went and, almost invariably, I was ready for whatever next challenge the game gave me. It wasn't necessarily easy but it certainly did feel much more fair. Plus, that meant that I was always engaged in the game and not just sitting in one spot taking fights over and over, which is an ideal way of playing am RPG for me (see also Chrono Trigger for a game that handled leveling properly).

For the sake of this article I did play through the Japanese SNES version of the title (with an English patch, of course) because I wanted to experience everything the game had to offer. When Final Fantasy IV was brought to the U.S. (as Final Fantasy II) the game was made easier in some respects, but a lot of the creative mechanics for each character were taken out (thinks like Cecil's Dark Wave and Porom's Cry, as two examples) along with a host of (what are now referred to as) "J-Items" that were exclusive to the original package. For the full and complete experience I wanted all that stuff back in the game and, I have to say, I don't think the game was made any better by their exclusion. Yes, the game might have been a little tougher in its original form, but not by much, and a lot of the variety and spice from this version was lacking in the U.S. release (which was they ported back to Japan as Final Fantasy IV Easy Type for some reason).

The original Japanese version also better reflects the story of the game than the U.S. edition. Take as one example Cecil's Dark Wave. It's attack you can't do in the U.S. version even though it's super helpful, and in this original SNES edition it causes a area of effect, non-element damage attack against all enemies on screen, at the cost of an eighth of his health. You feel it's lack some in the U.S. version, but then, when it comes to the plot, there's a distinct moment where the lack of the Dark Wave actually hurts the story. When Cecil, about a quarter of the way into the game, gets promoted to a Paladin he has to fight his dark reflection, the Dark Knight version of himself. This version will attack him with the Dark Wave three times before running out of energy and dying. If you have the Dark Wave and know that it drains your health as you use it, this battle makes sense, but if you never got to use the skill this is a meaningless moment that doesn't really resolve. It's moments like that where you wish we would have gotten the full Japanese version the first time around.

Now, yes, we did eventually get restored versions of the game in later releases and playing any of those, in my opinion, is preferable to Final Fantasy II USA. Plus, again, there's just more variety to the Japanese edition, with all the cool items you can use to cause magical effects in battle, the strategies you can devise from these items and the character skills. It's all amounts to a deeper and more satisfying game, making the Japanese edition the superior release of this title back in the SNES era.

Of course, whatever edition of the game you play you're still going to be in for an epic ride. Although Final Fantasy III on the NES was the first to introduce multiple overworlds to explore (with both the starting "floating island" and the eventual larger over overworld), this game has an even more expansive quest between its overworld, the dwarven underworld, and the (admittedly smallish) moon to hit throughout the game. It's like every time you get further in the quest, some new an wild area is unlocked that deepens the world you've been exploring.

And then there's Golbez. For much of the game he's the villain we're fighting against (until it's revealed there's someone even worse behind him, Zeromus) and he's a dark, evil, and charismatic villain. Golbez sets the template for villains to come, from Gilgamesh in Final Fantasy V (who fills a similar role in his game) to Kefka in Final Fantasy VI (who, at a certain point, steals the narrative and goes on to become the most successful villain in the series' history). it's fair to say that we wouldn't have those guys without Golbez and the part he plays in the story.

This is just such a great game, start to finish. I will note that I hadn't played this game before coming in for this review, although I had tinkered around with the Free Enterprise open world randomizer (so I wasn't a complete noob at this game). My time in the series went from the first title to the fifth and then, eventually, Final Fantasy VII and, for some reason, I just never came back to part four (or part six, for that matter, which will be a trip I'm sure). I thought I knew what to expect from this game but I found myself getting sucked in. I didn't expect to get as invested in this game as I did; this really won me over and it's a testament to the title that now, nearly 30 years after its release, and can take crusty gamers like me and make them into converts.

Where I would argue that some of the previous titles could be skipped (the second game especially, but even the first and third feel a little shallow at times), Final Fantasy IV feels like the first must-play title in the series. Just do yourself and favor and play the Japanese edition (with whatever language patch you need). Or pick up one of the later releases (like the PlayStation or Game Boy Advance) editions for a better, restored experience (I don't know how good the 3D remake is so we'll judge that one on its own another time). This game is worth absolutely it.