It's a Secret to... Wait, I Already Did That Joke?

Although my favorite game of all time is Chrono Trigger, I don't really feel like I'm really a JRPG guy. Sure, I played the original Final Fantasy (and I love watching randomizer runs of it), and I dabbled in a few other games of the genre (a couple of hours of the original Dragon Quest, a bit of poking at the Ys series). On the whole, though, most of my gaming time spent growing up was devoted to platformers and adventure games, the Marios and Zeldas of the landscape. 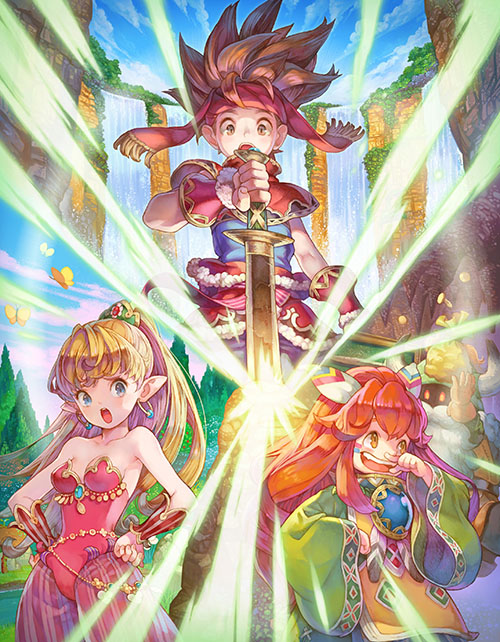 In a way that made me a prime candidate for Secret of Mana, which is essentially a blending of Zelda action with JPRG mechanics. A sequel to Final Fantasy Adventure, Secret of Mana continues the world established in the first game while reinventing many of the elements of the series that the Game Boy couldn't quite get a handle on. (And if the naming of this series confuses you, just remember that the series is a spin-off of the main Final Fantasy series, and all the games go under the Seiken Densetsu -- "Legend of the Sacred Sword" -- moniker in Japan, thus Secret of Mana is actually Seiken Densetsu 2.)

In the passing centuries since the defeat of the Dark Lord at the end of Final Fantasy Adventure, the Mana Sword (or Gemma Sword, or Holy Sword of Light, depending on your translation) has been sealed away, its power locked to protect the world. However, a young boy, Randi, stumbles upon the sword while playing with some "friends" (more like bullies) out in the woods. Using the sword to cut through the thick grasses and bushed so he can get back home, Randi accidentally removes the only source of protection (the magic of the sword) keeping the town safe from monsters. In response, the townspeople vote to kick Randi out of town.

What this does is force the kid out into an adventure he never would have expected, protecting the world from the evil Empire that wants to steal the power of the Mana Seeds and bring about the resurrection of a Dark Palace that will rule the world or destroy it or something. Along the way he'll collect two allies, Primm and Popoi, new weapons, new magic, and everything he needs to become the last of the Mana Knights (called Gemma Knights in FFA).

Like FFA (or Zelda), the entire game takes place in one large, inter-connected world. Most of the game takes place without the need for an overworld and your character can walk from one end of a zone to the other (largely) seamlessly. All the action takes place in the main world you explore and you'll fight (and cast magic) in real time (more or less). It's a very action-oriented game keeping you in the mix without ever pulling your attention away with random battles. 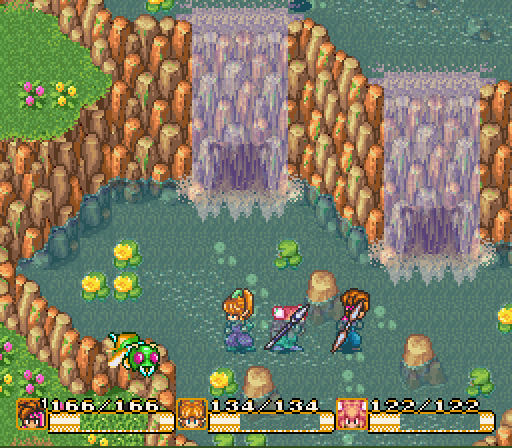 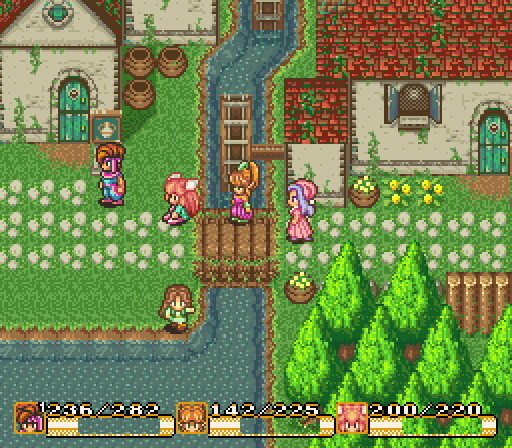 That said, the action isn't as seamless as it could be. Enemies have a bit of invincibility after being attack (while the game processes the damage it took). This forces you to wait between attacks, and sometimes when you and your allies attack at the same time, one or more of the attacks will get eaten. Regrettably the monsters don't necessarily have this same issue and can easily layer on attacks to your party members, essentially damage-locking you until you die. Some dungeons can be a pain to explore with tight corridors where it's hard for you to get an attack in while the enemies layer on the damage. Largely I took to using ranged weapons in these situations and praying I made it out.

However, most of your struggles will likely be in the early game. Once you get a feel for how the game plays, and start to power up your characters, weapons, and magic, everything will smooth out and you'll be on track to save the world. Don't think you have to grind, though -- leveling will happen pretty regularly just by exploring so it's rare you'll enter into a new zone at too low a level to take on the challenges. You will also be able to power up your selection of exploration-enabling weapons, each of which feel different and distinct (from the sword to spears and axes, whips and brass knuckles, to boomerangs and arrows) -- you can spend time powering these up as you get upgrades, learning new melee maneuvers or you can simply swap them on the fly as you explore dungeons and watch them grow.

You're also able to power up your magic each time you unlock a new Mana Seed. Not only are new spells added in to the mix regularly, but you can level them up so they cause more damage. Again, it's not necessary to grind these out as they're plenty useful from the get-go (and will power up as you use them). That said, I did spend my time grinding out magic levels as I could just to take the edge off some boss fights.

While the game is fun once you get over in initial hump, I can't say I was really sold on the story. When I first played it as a kid I didn't really notice any issues (mostly because I just wanted to run around and kill things). Going back and playing it on my SNES Classic (of which it's one of the 21 packed-in games), I started to notice the flaw. The story is a bit rushed in places, with characters that switch motivations, double-crosses that aren't given the time to have impact, and whole chunks of dialogue that just feel like they're missing. 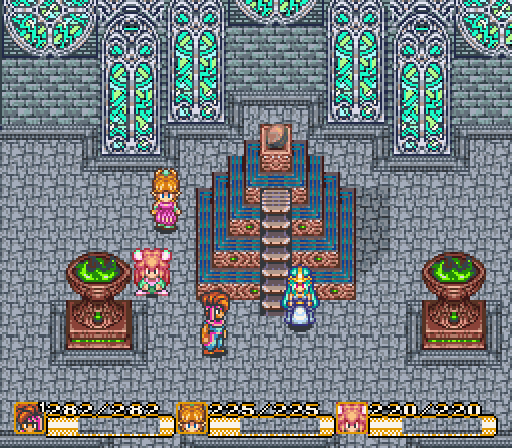 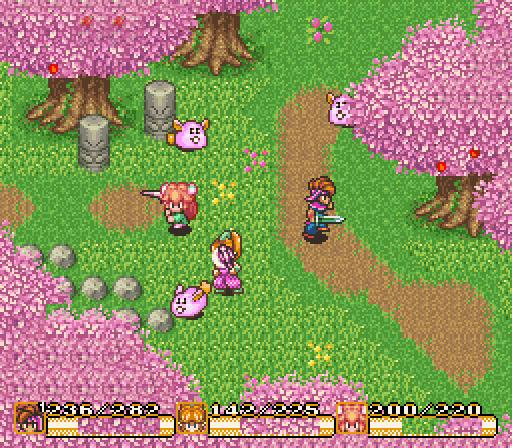 Much of this probably stems from rushed, botched production on the game. For those of you that aren't gaming historians, original Nintendo was looking to produce a CD-playing game peripheral for the SNES (an analogue to the Sega CD for the Genesis). Nintendo approached Sony to help them build the device, and the two collaborated on what was codenamed the "Play Station". Eventually, Nintendo got cold feet over parts of the agreement and started also talking to Phillips about maybe have them do a different version of the peripheral. When that happened, Sony pulled out completely. The Phillips deal then fell through (although Phillips was allowed to release a few off-brand Mario and Zelda games for their own system, the CDi) and the SNES never got a CD attachment. Sony, of course, then went off and made their own PlayStation system, changing the gaming market for the foreseeable future.

During that whole debacle, though, Nintendo sent a few demo units to game companies and Squaresoft elected to produce Secret of Mana for the peripheral. When the SNES Play Station project died, Square was forced to shove the game onto a (much smaller) cartridge, which then forced a number of huge cuts to the game. This impacted the story, the dialogue, and a number of events and locations that would have otherwise been in the game. It's understandable in retrospect, but this whole production snafu does leave the in-game story for the game feeling choppy and just... off.

While the story suffers, the production design is still sparkling. The game features bright, colorful, large sprites that take full advantage of the graphic capabilities of the base SNES. The music, too, is charming, with a number of great tracks that will have you tapping along as you explore another remote section of the world. Really, any issues I have with the story are slight in comparison to how good the game looks and sounds.

Really, the rough patches of the game don't truly mar the fun you'll have with Secret of Mana. While it may not be as polished as some other Square titles (and I still wonder why it made the cut for the SNES Classic when Chrono Trigger did not), it's still rightfully held up as a classic worthy of any classic gamer's collection.

SquareEnix has a habit of remaking and remastering a number of their classic titles. Final Fantasy Adventure, for example, has had two different remakes, Sword of Mana for the GameBoy Advance and Adventures of Mana for cellphones (both of which I eventually need to check out and review for this site). For the longest time, though, Secret of Mana was able to avoid this trend -- it showed up in places like the Nintendo Virtual Console and in the recent, Japan-only Seiken Densetsu Collection in its original form. 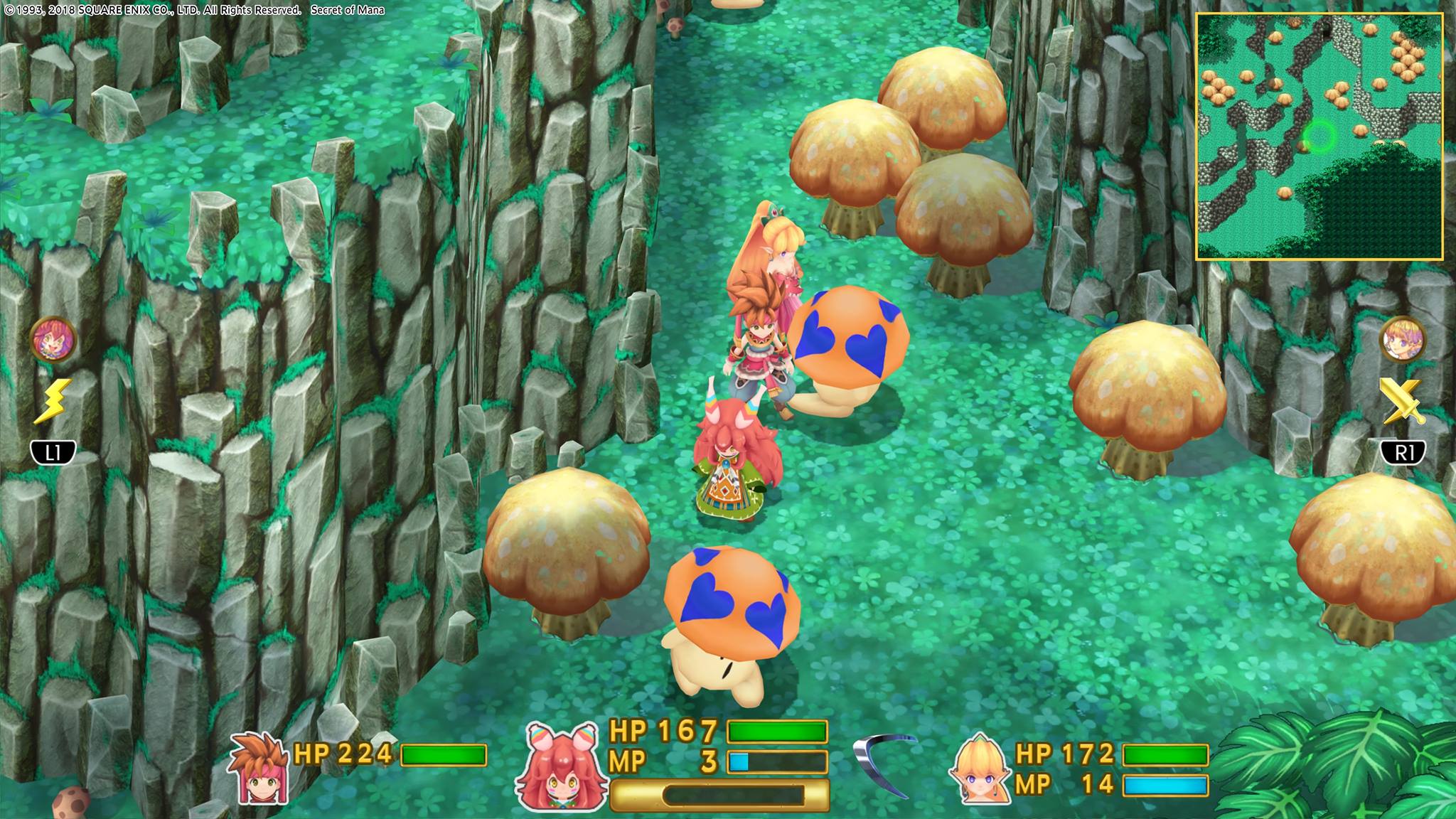 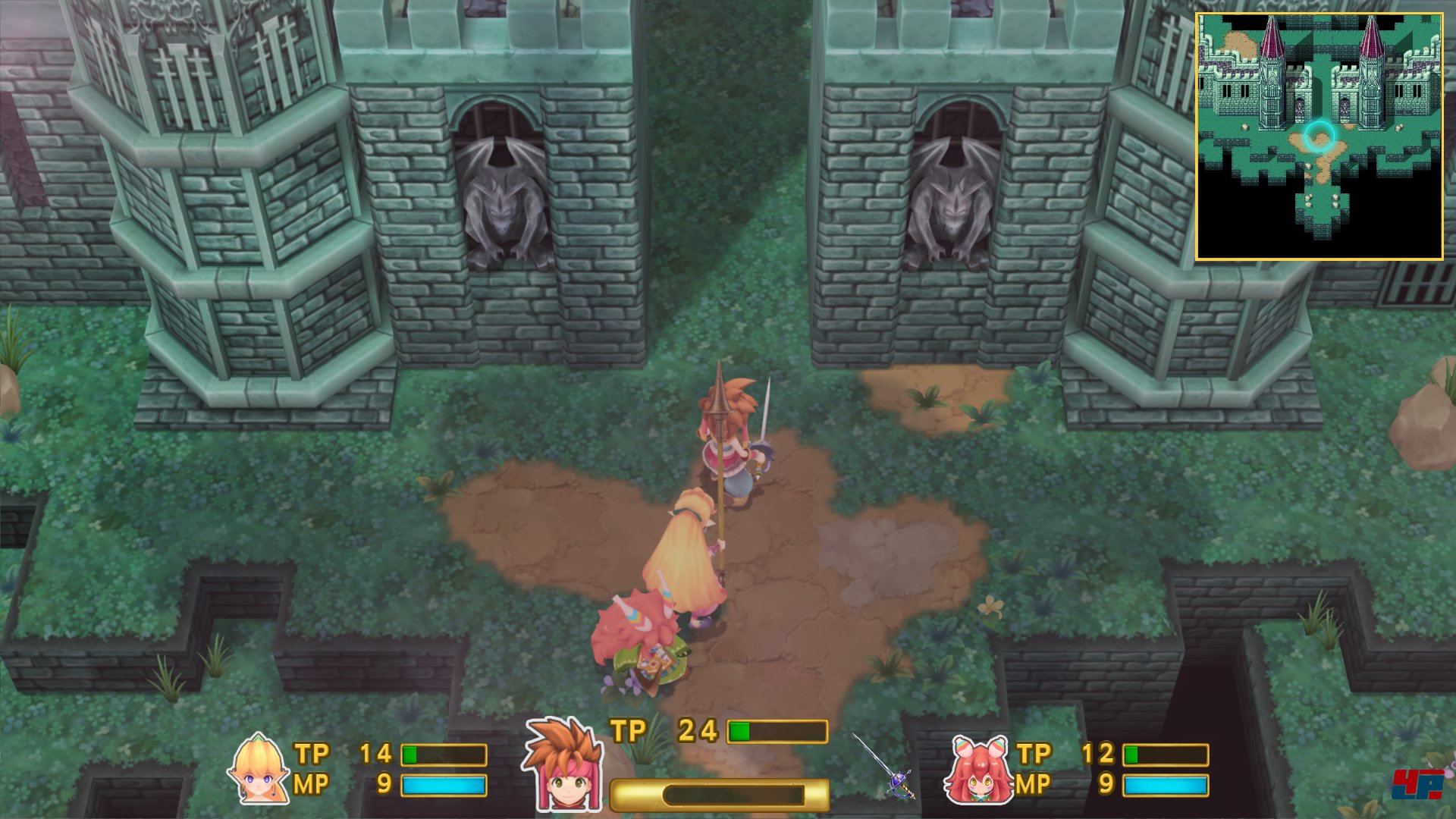 That changed, though, with the 2018 PlayStation 4 remake of the game. While there's something fitting about Secret of Mana eventually coming out on some version of a PlayStation, this edition was, apparently, pretty bad. While the game got a graphical overhaul into 3D polygon graphics that, I don't think, were all that terrible, the new look did lose some of the charm from the old graphics. Worse, the music remixing was just downright bad. The music, while given a nice, orchestral feel, has weird, dissonant sections added in that ruin the overall experience.

In short, if you want to play Secret of Mana, you're better off finding a classic edition of the game and avoiding the remake if at all possible.