On the Fourth Day of Die Hard, My True Love Gave To Me...

An Assault on a Battleship

I've never watched a Steven Segal movie before. Sure, I've seen some stuff he's been in, usually as I was flipping through the channels and caught sight of the man punching people against generic backgrounds. If you grew up in the 1990s then you saw a lot of bad action movies as you flipped past HBO and Showtime, but I never felt the need to sit down an actually watch a Segal film. I think I caught fifteen minutes of the one where he's a fire fighter (or something), and that flick didn't impress me, so I never bothered going back. 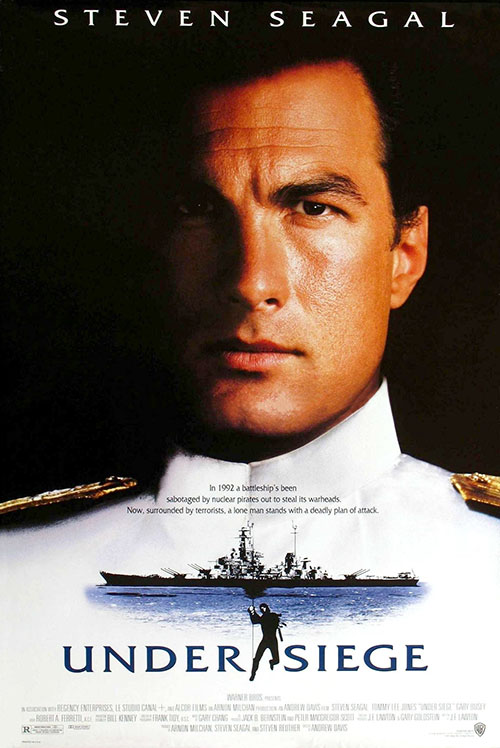 I know the guy was, at one point, a pretty capable fighter. I've seen videos of him on YouTube where he handily beats people up with a bored look on his face, obviously over-matched for every person they put in front of him. There's some skill there, even in his later life where he's at least a Segal-and-a-half in size now. But as a movie star, Segal is lacking. He doesn't have charisma, or attitude or, well, talent. The man probably can fight (and I'm not interesting in going toe-to-toe with him to find out), but when it comes to acting he's about as interesting as a block of wood.

That meant that going into Under Siege I could have had preconceived notions about how Segal was going to perform. On the flip side, this film was Segal's most successful, and the only one of his big theatrical releases to get a sequel (of course, within a few years of this movie Segal was relegated to home video hell). If any movie could sell me on the talents of Segal, his acting and fighting prowess, it had to be his biggest and best movie to date, right? Sadly, that was an assumption Under Siege quickly disproved.

In the film Segal plays Chief Petty Officer Casey Ryback, ship's cook for the U.S.S. Missouri (who we learn later in the film was an ex-Navy Seal, busted down in rank after punching a commanding officer). While the rest of the crew is off partying, celebrating their captain before the Missouri is officially decommissioned, Ryback gets into it with the Executive Officer, Peter Krill (Gary Busey), who has Ryback locked in the meat fridge (as a kind of makeshift brig) until after the party is over. But, in the tradition of so many other Die HardThe 1980s were famous for the bombastic action films released during the decade. Featuring big burly men fighting other big burly men, often with more guns, bombs, and explosions than appear in Michael Bay's wildest dreams, the action films of the decade were heavy on spectacle, short on realism. And then came a little film called Die Hard that flipped the entire action genre on its head. clones, things quickly go off the rails.

The band that had been flown in for the party, along with all the servers and cooks, actually all turn out to be an elite paramilitary team led by Bill Strannix (Tommy Lee Jones), and as soon as the party is in full swing and all the sailors have their defenses down, the terrorists strike, taking over the ship and locking all the sailors in the hold. All the sailors, that is, except for Ryback Soon enough Ryback is on the loose, hunting down the terrorists and taking them out one by one. Can Ryback free the other sailors, take back the ship, and stop the terrorists before they're able to launch nukes and blow up parts of the Western Seaboard? Well, it's a Segal film so more than likely. 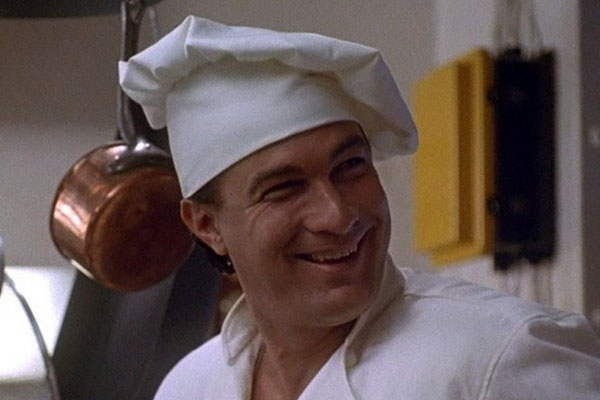 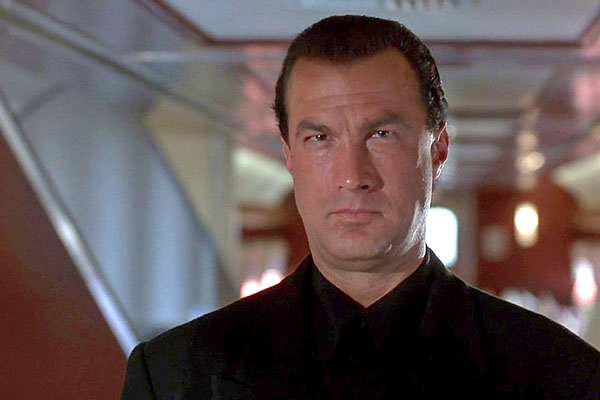 As Segal's best and biggest action flick, I spent most of Under Siege's runtime wondering, "why?" While the production values of the film are high, with an all-star case (and also Segal) and game performances, you'd think this movie should be a crowd pleaser for the ages. Instead, though, I was bored out of my mind, and I have to think the fault lies primarily at the feet of Segal. To make a proper Die Hard-style film, one man against an army of greedy terrorists, you have to have a charismatic leads at the center of it all, someone that can carry every scene they're in because the focus is solely on them. John McClain works because he's played by Willis giving it his all. I'm not certain Ryback even got five percent of Steven Segal's interest in this movie.

Segal's inability to act is only confirmed here. He's a sentient piece of lumber, mumbling his lines and glaring at everyone as if that's all that's required for "acting". I have to think the producers realized Segal wasn't the most charismatic lead (to be charitable) so they packed the cast with as many solid performers as they could just to try and elevate Segal. Not only does the film has Busey and Jones but a fleet of "hey, it's that guy" character actors, from Colm Meaney to Troy Evans, Raymond Cruz, and Kane Hodder (aka, the guy that so often played Jason in the Friday the 13thOne of the most famous Slasher film franchises, the Friday the 13th series saw multiple twists and turn before finally settling on the formula everyone knows and loves: Jason Voorhees killing campers 'round Camp Crystal Lake. movies). That's a stacked deck of people that know what they're doing, all working opposite the slumbering log of Segal.

Maybe, just maybe, Segal's wooden performance would work if the villains across from him were charismatic and over-the-top. You'd think with both Busey (the most famously crazy famous guy in Hollywood, even more so than Nick Cage) and Tommy Lee "I Can Over Act the Shit Out of Two-Face" Jones would be able to give us the most bug-nut crazy terrorist due Hollywood has ever seen. Instead, though, it's like there was only so much crazy in the room, that the producers had a strict budget on crazy and having both Jones and Busey on set divided the crazy available because both of them give muted, half-hearted performances. I don't know why they couldn't unleash their scenery-chewing beasts, but I was expecting fireworks from them and got only sad little farts of performances. I need better from these two.

But sure, okay, you don't watch 1990s action flicks for the performances -- a "fact" I'll debate any day because charismatic performances are central to making these films work, but let's have this point stand for the sake of argument. Action films are about the action, so obviously as Segal's biggest movie the action should be rock solid. It isn't, though; the action is comically bad, really. For a guy renowned for his martial arts prowess (something even the exposition in the movie re-enforces), the characters in this movie use guns a lot, and gun-play is something Segal is really bad at. His looks comical whenever he holds guns, like they're alien objects he's only just discovered and has little clue how they're supposed to work. This deflates about eighty percent of the action because the hero just can't invest in what's going on around him. Instead of thrilling gun-play we get tedious sequences that leave us as bored as our lead hero looks. 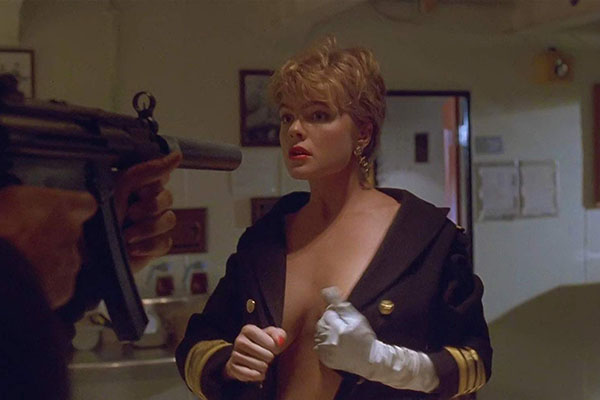 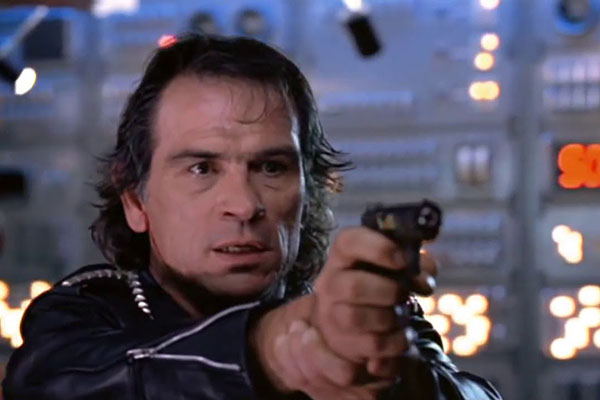 The only time Segal even seems comfortable is when there's a knife in his hand, but this causes a different issue: Segal's knife-based martial arts are not very theatrical. He holds the knife in a goofy way and does this strange dance, as if he's in a Street Fighter game just waiting for the next round to start. When he attacks it's fast and hard, but it's actually so fast, and he's so clearly outperforming anyone coming at him, that the action sequences are over before they even start. While this might have been realistic for Segal's skills it doesn't make for thrilling cinema, something the director really should have told Segal. "Slow it down a little so we can see what you're doing. Play with your food a bit."

I was just so disappointed in this movie. There's a murderer's row of solid actors but they're all wasted circling Segal. The action isn't there, the acting isn't there, and there just isn't anything else to hold on to for a full hour-and-a-half. For a movie hailed as a great Die Hard-clone and the best of Segal's oeuvre, Under Siege disappointed on all counts. And, sadly, there's a sequel I'll have to suffer through at some point.