On the Third Day of Die Hard, My True Love Gave To Me...

Die Hard With a Vengeance

I think it goes without saying that the second film in the series, Die Hard 2: Die Harder, is nowhere near as beloved as the original Die Hard. The sequel is simply not as good a movie, either as an action flick or as a holiday movie. It's not the worst movie I've ever seen, certain, but when you compare the two back to back, Die Harder feels like a pale imitation of the original. Clearly if a third film were to be made, something different would have to be done with the series. 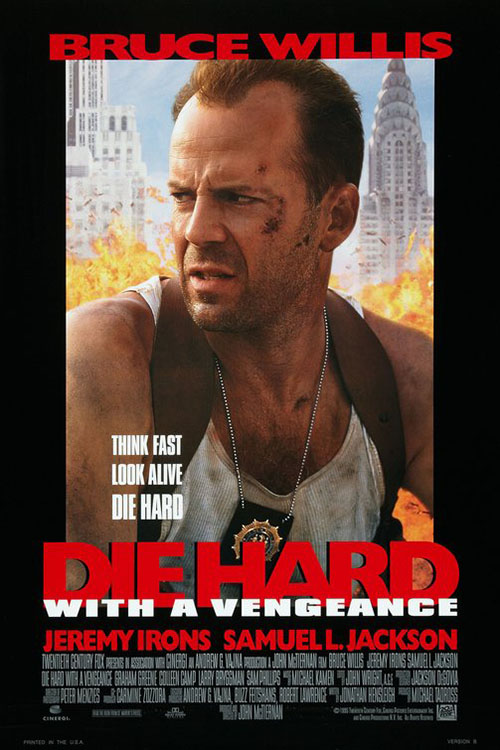 Five years later the studio released with Die Hard With a Vengeance, a film that continues the adventures of John McClane, low-grade detective of the New York police force. In many ways, this film is an answer to the complaints about Die Harder. Instead of simply being a rehash of everything that worked from the previous couple of movies, Vengeance changes up many of the basic elements of the series to try and push the movies in a new direction. And, for the most part, it works.

When we pick up with John McClane, he's back in New York, alone, separated from his wife, and working on a nice, fat suspension from the police force. However, during morning rush hour, a bomb goes off in a department store, blowing out the entire first floor. Soon after, a madman, Simon, calls up the police and demands that they bring back John McClane and have him start performing little tasks or another bomb will get set off. Soon the tasks become more elaborate, more bombs start showing up, and one goes off right in the heart of Wall Street. While the police scatter, trying to find the next big bomb (which is supposedly set in a school), John (Bruce Willis), along with his new partner, Zeus (Samuel L. Jackson), having to race around the city playing Simon's games while working to find Simon and end his terror campaign.

Obviously, the first and biggest change this film makes to the Die Hard formula is in the setting. By removing the action from a single building and setting it all over downtown New York, the film opens up the action, allowing for more diverse set pieces (and bigger action spectacle). This means that the story doesn't have to all take place in a single area (a "bottle movie", if you will) but instead can have a lot of diverse locales with different storylines all going on at once. The energy of Die Hard With a Vengeance is very different from the previous two films, but that's a good thing -- Die Harder tied itself too closely to the original and suffered for it.

In broadening the setting the film also allows for a larger, more diverse cast of characters. The original films had a small group of characters to worry about, with each film focusing on a single cop, McClane, against a whole pack of bad guys. For a larger city, though, there had to be a biggest cast, so not only is there McClane and the terrorists (lead by Simon, who was played by Jeremy Irons) but also an entire group of cops that McClane is working with as well. Instead of being the fly in the ointment forced to go it alone, he has some resources to work with, people to rely on to help him through the day. While the rest of the police characters are never as interesting as McClane (since it is his movie), they still provide good color, and needed B-plots, to change up the action and make the story feel more full (and more plausible). 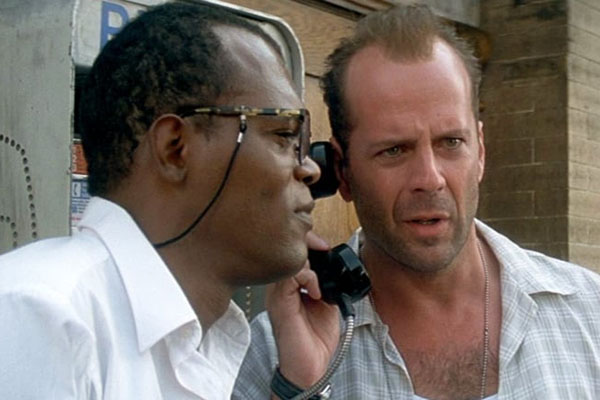 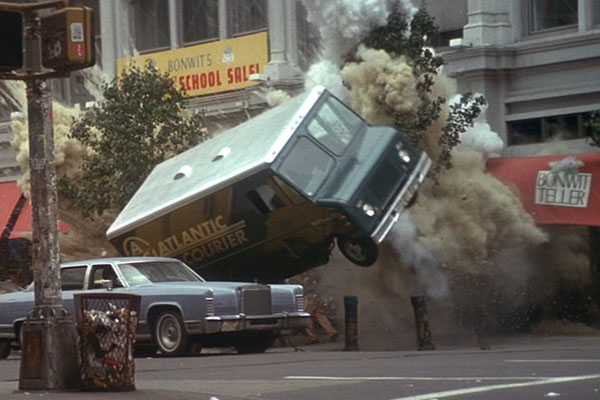 Of course, the biggest change to the Die Hard formula in With a Vengeance is the addition of a partner for McClane. Zeus, a civilian that gets wrapped up in McClane's shenanigans, is stuck with McClane for the length of the movie. Sure, McClane has had people he's talked to in the past, like Al in the first film or Melvin the janitor in the second, but he's always been forced to do the big scenes by himself, a literal one-man army for most of those films. Zeus, though, isn't just a voice on the other end of a walkie or someone McClane bumps into once in a while -- Zeus is forcibly stuck by McClane's side, made into his partner because Simon thinks its funny. As a matter of storytelling this is a solid move as it gives McClane someone to banter with. It also gives McClane a more diverse set of skills to work with since Zeus is an electrician who's good with cars and machines.

It helps that Samuel L. Jackson is a great actor who really gets into this role. Although he had shown up in a number of films over the years, with small roles in films like Patriot Games and Jurassic Park, Die Hard: With a Vengeance was one of his first big, star-making roles. It's a great performance, a character that really plays to Jackson's strengths. He gets to be his sarcastic, motor-mouthed sell, full of that venomous, "mother fucker" attitude we've come to expect from the actor. While I could see other actors playing the role of Zeus in the film, few would have done it with the panache that Jackson brought.

The other great addition to the film was Jeremy Irons as Simon. As we come to learn, Simon is actually Simon Peter Gruber, brother to Hanz Gruber, the villain from the first movie. While no one could be Alan Rickman, Jeremy Irons manages to bring his own style to Simon, making a colder but no less charismatic villain. Since the film couldn't just bring back Hans again, Simon is the next best thing, and Irons bring the necessary charisma, and malice, needed for the role. In the Die Hard pantheon, Simon ranks a close second to Hans as far as the villains are concerned.

The best thing to film does, though, is pretend that the second film doesn't exist. While the events of DC are never explicitly written out of the franchise, they're also never mentioned at all. Instead of being happily married, McClane is back in New York (without any explanation about how he left the force back in L.A.), once again separated, and a deeply sad and lonely person. This is the character we expected, the guy we enjoyed from the first film who had little to lose (and too few cares to give). Nakatomi Plaza is, of course, the catalyst for the plot of this movie, and the film acknowledges that legacy, but in pretending the second film doesn't exist, fans of the series can easily ignore that movie and just go from film one to film three without it feeling at all jarring. 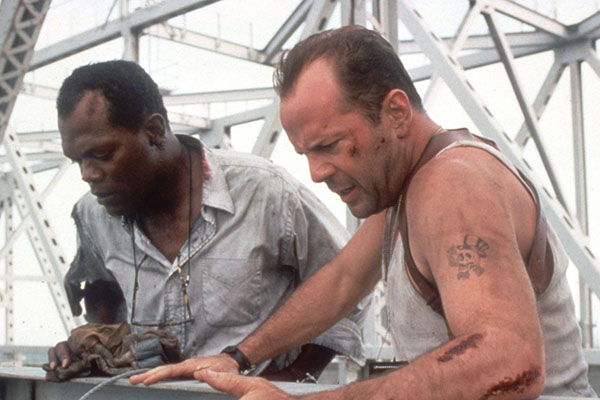 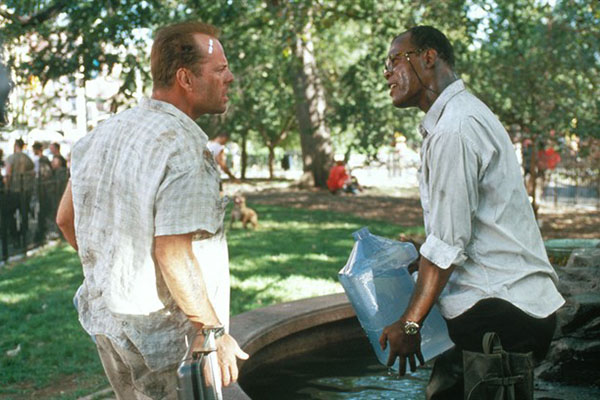 That said, not everything about Die Hard With a Vengeance works. For one thing, the film still gives in to the need to make McClane a superhero. There are a number of small instances where things that should have killed him (being too close to a bomb blast, too high up to survive a fall) instead leaves him with little in the way of scuffs and bruises. Sure, he becomes dirty and bloody over the course of the film, but it never feels like it slows him down, not in the way it did in the first Die Hard. He might not be the invincible bullet hose hero that so many other action stars became in the 1980s, but he's not that far removed in this film, either.

And then there's the ending of the movie. As released, the last section of the film is a bombastic action set-piece, a final confrontation in Canada between McClane (on foot) and Simon (in a helicopter) that, while energetic, feels out of place with the style of action from the rest of the movie. Of course, this was the third ending designed for the film -- before this a different, more sedate (and rather vindictive) ending was filmed that saw McClane have a Russian Roulette-style showdown with Simon months after the events of the movie. While this one certainly felt more thematic with the movie, it was also very slow. It just didn't work any better. Of course, the first ending was only ever scripted and it saw John secret one of Simon's bombs onto the villain's plane, effectively hoisting Simon by his own petard. This ending honestly might have worked best, but it's sadly not the one we got.

That's the big flaw of the movie as filmed: by allowing McClane to have a huge blow out (one that really doesn't make sense if you think about jurisdictions and international law) it makes him into a kind of supercop. McClane is not supposed to be a superhero, just some schlub that ends up in the wrong place at the right time. By making him an expert in anything (like a pistol sharpshooter at the end of this movie) you remove the character from reality. He's no longer an unlucky everyman but a counter-terrorist unit all by himself. That ruins the very essence of the character and robs the movies of their best hook.

Of course, that's a flaw that only really crops up in the next two films in the franchise, made years later by new teams that don't seem to understand who John McClane really should be. It's a flaw in Die Hard With a Vengeance, to be sure, but not one that truly ruins the movie. As far as Die Hard sequels go, Vengeance is certainly the best of the set. It's a fun, enjoyable action movie that changes up the formula enough to feel fresh and exciting. It might not be as good as the original, but it does comes the closest of all the sequel.