On the Fourth Day of Die Hard, My True Love Gave To Me...

After 12 years it's fair to say that no one was really clamoring for another Die Hard film. The third film, Die Hard With a Vengeance, had nicely capped the series, creating a good conclusion to the story setup in the original Die Hard (with the less said about Die Hard 2: Die Harder the better). In essence, hadn't we really seen all that Bruce Willis's John McClane had to offer? Was there really a good way to justify yet another visit to the well? 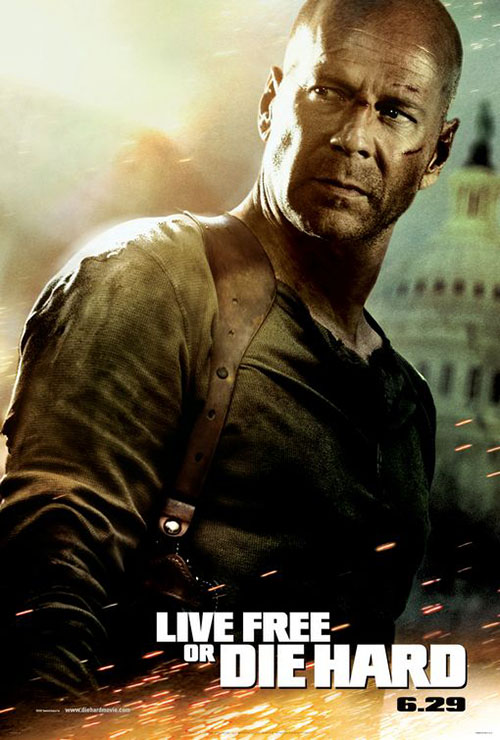 It's hard to say that Live Free or Die Hard, the belated fourth entry in the series, really does much to answer that question. It does try, with McClane himself acknowledging that he'd love to let someone else clean up these messes, to not have to be they guy always stuck in the middle of a terrorist threat. He'd rather not be a one-man terrorist-defeating army, and yet time and again he's that guy. Having the character acknowledge it is nice, but that doesn't change that fact that by the fourth time this happens to the same guy (and this time without the brother of a previous terrorist pulling him back in) it stretches plausibility just a bit.

In Live Free or Die Hard, John is called in to pick up a white hat hacker, Matt Farrell (Justin Long), after other hackers start going after keep Federal Online infrastructure. McClane is supposed to grab the kid and bring him down to D.C. so the kid can be questioned/debriefed. However, before John can grab the hacker, terrorists come after Farrell. McClane, being McClane, takes out a couple of the attackers and gets the kid to temporary safety, but this only serves to pull McClane in completely. Soon he's elbow deep in terrorists as they quickly start shutting down the U.S. -- its government, its power grid, its financial sector. At the center of the mess is elite hacker Thomas Gabriel (Timothy Olyphant), a one-time Fed worker he went rogue and is now threatening everything... all so he can make a lot of money and retire away from the mess he's made (because it's always about the money in these movies).

Die Hard With a Vengeance did a good job taking the basic formula of the series and changing it up enough to feel fresh. The film moved out from a single location, using an entire city as its backdrop, and gave McClane a partner (with different skills) to rely upon (and banter with). Live Free or Die Hard doesn't change up that new formula much, instead simply doing a decent job iterating on the story mechanics. It doesn't feel as fresh as the third film, instead doing a passable job of keeping the film humming along through story beats that feel fairly familiar.

The freshest take the film has is with the type of terrorism deployed. Instead of holding people hostage (or threatening violence via guns or bombs), its the very core of society, that which makes us a civilization, that's held "hostage". It keeps the threat from having a face, sure, but at the same time the threat imposed by the terrorists somehow feels more real, more prescient for the viewing audience. It's a different way for the terrorists to operate in these movies and certainly keeps the plot from feeling too stale. 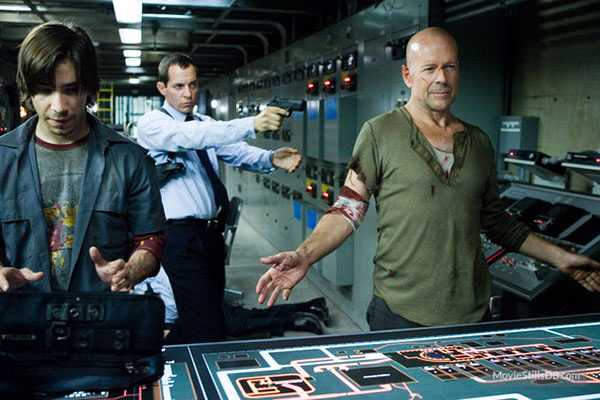 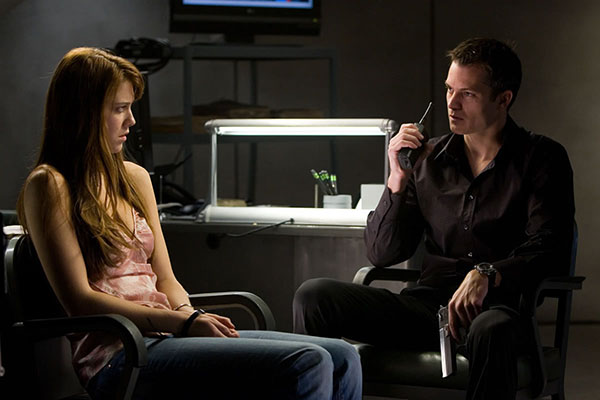 That said, having the bad guys be techno-terrorists certainly doesn't help the film after all these years. While the basic idea of the movie is still sound -- the infrastructure of the U.S. is probably still just a weak to terrorist threat now as it was then -- the technology actually on display in the movie is beyond antiquated a decade later. The hackers all use cruddy brick laptops and flip-phone PDAs, tech that had to have been obsolete five minutes after the film came out. While this tech might have been realistic at the time, it just looks cute now viewed all these years later.

Weirdly, other sections of the movie use tech that's positively sci-fi by comparison. There's cooling towers set in underground bunkers with high-tech security systems that seem plausible if you don't know how real infrastructure is setup. And that doesn't even delve into the fact that every seems to have a custom OS on their computers and can instantly "hack" into any system they hook up to (the word "hack" is used a lot in this movie, by everyone, so prepare to become numb to it). Hell, even the Federal government has an implausibly nice setup for their techno-crime division -- I've worked in government for a while, and no government office has a setup anywhere near as nice as the FBI in this movie. It's pretty, and certainly seems fancy, but it's just not realistic.

Not that realism is really the concern of this movie, all things considered. This movie does a lot to push John McClane away from his "every man" role from the first two flicks (and, mostly, the third, too), shifting him much closer to a superhero than he's ever been before (a role the fifth film is all to happy to cast him in). It starts early, with John taking out a helicopter with a police cruiser by ramping the latter at the former. He then drives a van through a building and into an elevator shaft before climbing out, none the worse for wear. The worst of these sequences, though, is also the biggest and most bombastic: John McClane, on foot, against a harrier jet. This literally happens, and is as stupid as you'd expect. It just doesn't work at all.

Really, the parts of Live Free or Die Hard that work best are the quieter ones, the moments were McClane and Farrell can talk about what it means to be a hero, or the toll this kind of life takes on a person. These are the moments where the John McClane we know shines through, when Willis actually gives a real performance and doesn't just show up to get a paycheck. Willis is a great actor when he wants to be, but it's obvious there are whole parts of this movie that he's just not interested in. 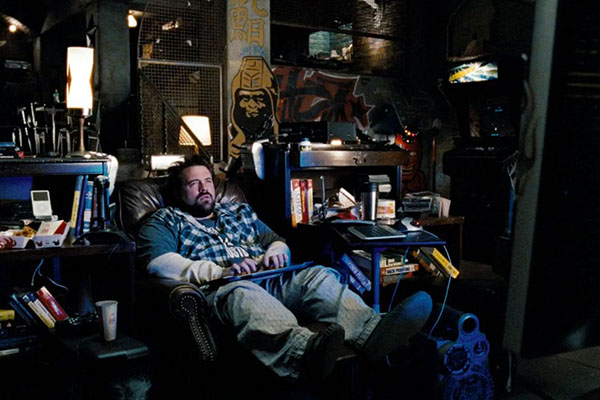 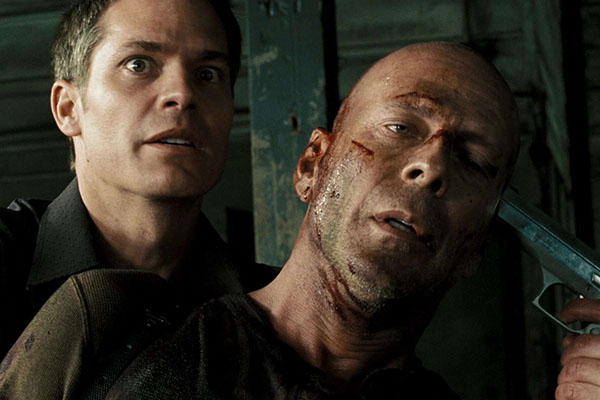 Better is Justin Long as Matt Farrell. The character, as played by Long, isn't really all that different from any other character he's played -- it's another iteration of his characters from Dodgeball and Accepted, all stutters and doofy charm. We can't really hold this against him, though, as he was obviously hired to play this specific character (in much the same way Sammy J. was hired to play himself in the last movie, and Bruce Willis is always hired to play Bruce Willis). Long gets into the version of the character the producers wanted and he does a pretty good job making the character someone you can care about (despite using all kind of technology terms most people won't understand).

Sadly, on the terrorist side of the equation the movie falls apart. Timothy Olyphant is a fantastic actor (go watch Justified and see what the man can do), but he just never makes Thomas Gabriel into a credible threat. He's too weird, too nervous, without any malicious charm for him to be able to stand up against McClane (even when McClane is phoning it in). He's outmatched the second McClane shows up, and everyone watching the movie already knows it. Hell, his second-in command, Mai Lihn (Maggie Q), it a more menacing and charismatic force than Gabriel. There's a version of this movie in some universe where her character takes over the terrorist cell half way in (instead of dying at the mid-point), and that movie is probably more interesting than the one we received.

Live Free or Die Hard is a strange movie for the series, to be sure. I feel like if it didn't have "Die Hard" in the title, I probably would have liked it at least somewhat better. That said, if it wasn't a Die Hard I doubt anyone would have paid attention to it -- it would have just been a generically average techno-thriller (like Blackhat) instead of a middling Die Hard effort. There are parts of the film I like, but almost none of it is the action (you know, the main draw of an action movie). I can't say the film is good, at all, but it's also not the worst film in the series.