On the First Day of Die Hard, My True Love Gave To Me...

A Bond Heist at Nakatomi Plaza

It's that time a year again, a time when everyone is putting on their favorite holiday movies. It's also a time for people to debate if the Bruce Willis classic, Die Hard is a Christmas movie or not. That's a debate I don't particular care to have simply because it's a topic that's entirely subjective. Sure, the film takes place in and around a holiday party (one invaded by terrorists), but considering it came out in July of 1988 (and not during the actual holidays), it's pretty clear the studio didn't consider it a holiday film. However, if you enjoy playing it during the holidays, it's a holiday movie for you. I personally like playing the Multiple Santas episode of The Tick every year, so we each have our own holiday classics. 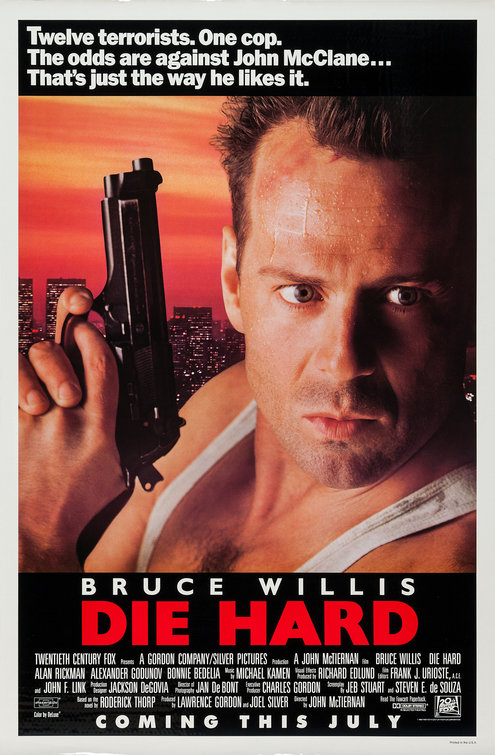 But then, I'm Jewish so what rates as a holiday classic is going to be different for me than other people. By the logic of "it takes place around the holidays" films like The Wiz, Go or Iron Man 3 could all be considered holiday movies, and yet I don't think any of them are going to make the cut for most fans... And look at that, I got sucked into the debate.

My point for raising the topic to begin with is that people want Die Hard to be a holiday classic not because of its themes, or its counter-programming aspects; they want it because it's a damn good film. It was an instant classic of the action genre that launched a five movie (and going) franchise as well as the careers of both Bruce Willis (as main character, police officer John McClane) and Alan Rickman (as villain Hans Gruber). If the film didn't have a holiday party going on in the background, people would just find other excuses to put it on any chance they could.

In the film, McClane is traveling from New York (where he works) to L.A. to be with his family. His wife got a job with the Nakatomi Corp. six months earlier and had moved to California (with their kids in tow), leaving McClane in New York (holding his proverbial dick). Now, around the holidays, John has come into town to see the wife and kids and maybe try to patch everything up. Unfortunately for John's plans, terrorists invade the Nakatomi building soon after John arrives. They start taking the guests at the party hostage, John escapes into the ducts, and so begins a cat and mouse game of John versus a team of highly-trained German assassins.

In many ways the film is all Bruce Willis. I can't really say it's a one-man show since he has a number of interactions through out the movie with other characters (usually via walkie-talkie), but it is basically the Bruce Willis show. He makes a move, others make counter-moves, and then he delivers witty banter. It's essentially the standard 1980s action film template... except better in every way. 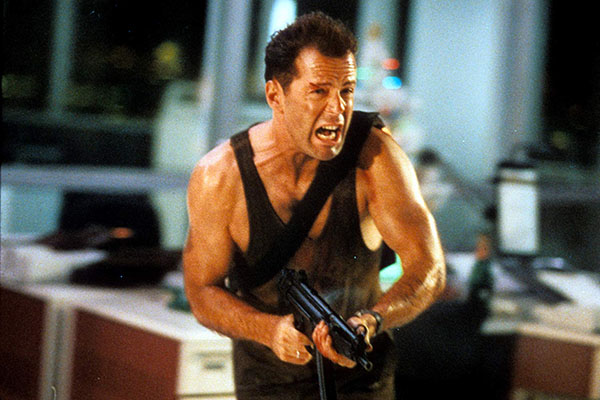 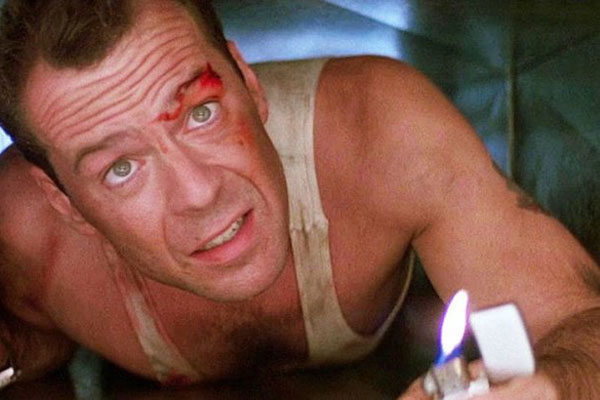 Part of why Die Hard (besides Willis putting in a fantastic performance) is because it inverts so many cliches that had become ingrained into '80s action cinema. McClane is not an invincible beefcake, mowing down armies with is machine gun. It's a fallible dude that gets trapped in an impossible situation and manages to survive, time and again, largely by dumb luck. He takes damage, he bleeds, and he comes out of every situation worse for the wear.

Yes, he's a quippy guy, but it's not in the same kind of way of any Arnold Schwarzenegger movie from the same era. There's no turning to the camera after a guy gets crushed by a freezer, then saying "why don't you chill out." All of McClane's witty banter is sarcasm to either (a) annoy the villains or (b) to cope with the impossible odds against him. McClane is funny, sure, but also desperate, strung out, and alone the whole time. You care about him because he's trying to survive and not because he can make terrible puns while mugging for the camera.

But then Hans Gruber is also an inversion of many villains in 1980s action cinema. Usually the terrorists in these kinds of films are ideological zealots, out to right a wrong or make a statement by killing as many people as possible. Not Hans, though. No, his motivation is greed, and while he puts on the veneer of a terrorist, his real goal is making money in big, fat stacks. It's no wonder so many action villains after Die Hard started having greed as a motivation. Films like Speed (aka Die Hard on a bus) and Broken Arrow (Die Hard with nukes) gave us flawed, greedy characters because while zealots can scare us, greed is a factor we not only understand but can relate to. And, deep down, once we see Hans's plan in action, we kind of start rooting for him, at least a little.

Of course, what really works about the villain is Alan Rickman. He brings classiness and charm to Hans. In the hands of a different actor Hans would just be another euro-trash villain, one note and disposable. He wouldn't be someone to root for and he certainly wouldn't make the list of great action movie villains. Rickman, though, made Hans into an equal for McClane, someone that could stand toe-to-toe with the cop and maybe come out on top. 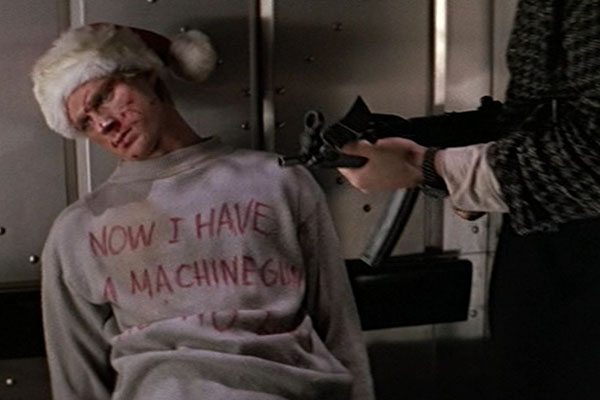 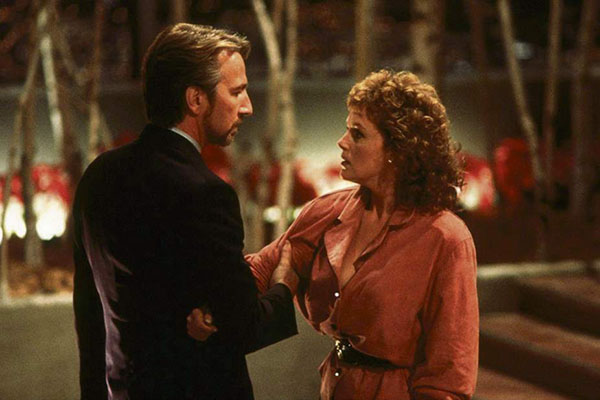 The two characters one share one scene together before the climax of the film, and that one scene is tense and brilliant. That one scene is all it took for both characters to feel each other out and learn all they needed about each other. That's why, in the climax between the two, there's a kind of mutual respect. They hate each other, but they recognize that each is a worthy foe for the other. It's a magic the films going forward tried to recapture time and again, but there was never quite the same chemistry between the leads as there was between Willis and Rickman.

That's part of the reason that, for the longest time, I kept hoping they'd do some kind of reboot of the franchise, find some way to get both Willis and Rickman into another Die Hard film together. My thought was to do Die Hard 1880, set the film in the Old West with ancestors of McClane and Gruber, maybe have it be between train robbers and the local Marshall, and recapture that magic. Sadly, Rickman died a couple of years back (and Hollywood has never listened to my ideas anyway), so that plan had to get scrapped.

Still, we have the first Die Hard, the best of the whole series. Holiday movie or not (and I leave that decision up to you), the film is a classic of the genre. So, for this, the "First Day of Die Hard", if you haven't seen the film do yourself a favor an pop on Die Hard. It's probably playing (or streaming) somewhere. Go watch the film and know what the rest of us do: Die Hard is (holiday) magic.