The First Version of the Site 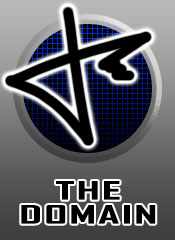 Man, I told you The Domain was gone. Those articles still exist, but they're awful and I am not bringing them back. And yet you clicked in here in hopes of finding some of those terrible articles, didn't you?

Fine, here's a little bit of backstory to tide you over...

For those unaware (which I would assume are most of you), I have been doing my stupid "writing about crap only I care about" thing for a long while. Back when everyone was putting their sites on Angelfire or Geocities, I created my little slice of the web, Darkmoon's Domain, and it was exactly as awful as you'd expect for a teenager. The tone of the articles was, essentially, conversationally belligerent, and I'm not at all certain why anyone read what I was posting. People did, I know, but it boggles my mind as to why.

Over time, a couple of friends volunteered to write a few articles for the site as well. At that point I dropped my online name from the title and it became "The Domain". It was still wretchedly written, but now in a collaborative sense.

And then eventually I deleted the site from the web. The site was awful and I was glad to be rid of it. Don't get me wrong, I still have every article written/submitted for the site because I don't throw anything away if I can help it. I go back through once in a while to marvel at just how insipid the articles are, mostly to remind myself "hey, your writing isn't this bad anymore."

Still, unless there's some pressing need for me to revive those old articles, the only trace of the old site that will remain is this page telling you that there is no trace of it left. Redundant, to be sure.

I did like the design for the site, though. The grey background with the blue mesh gradient was pretty slick looking. Bad articles, good design.

Some would say that's still my writing style. Sigh...