From the Past to the Future and Around Again

Legion the FXX-produced, X-MenLaunched in 1963 and written by Stan Lee and Jack Kirby, the X-Men featured heroes distinctly different from those featured in the pages of DC Comics. Mutants who didn't ask for their powers (and very often didn't want them), these heroes, who constantly fought against humans who didn't want "muties" around, served as metaphors for oppression and racism. Their powerful stories would form this group into one of the most recognizable superhero teams in comics (and a successful series of movies as well).-related TV series, has been on my list of things to review for a while now. It just so happened that I started work on this site long enough after I'd watched the first season that I didn't feel comfortable talking about that show at the time. So I waited for the second season to come to Hulu (since I unplugged from cable a while ago), and that was a long wait -- FXX apparently takes their time bringing shows to the service, despite Legion season one showing up on Hulu the day it was done airing on the cable network. Now that second season is finally available I can talk about it at length. 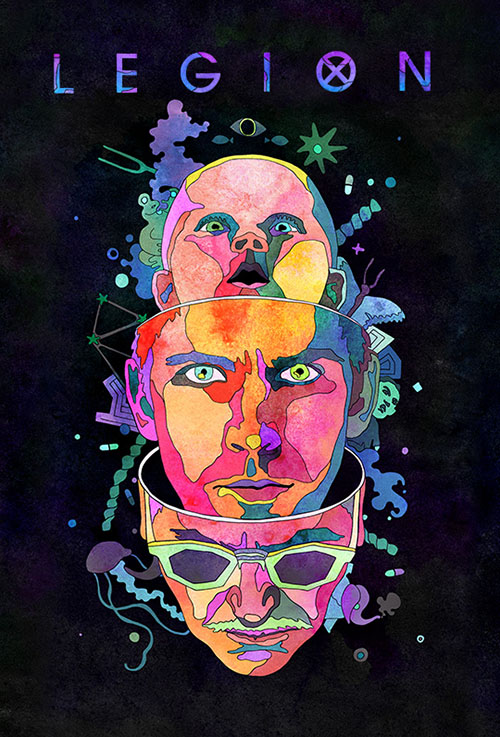 The show is... well, it sits in a weird place in continuity. Ostensibly it's a show about Marvel mutants, but it doesn't take place in any easy part of the X-Men continuity -- not the old Fox Movie timeline, not the reboot timeline, nor in whatever Hell-dimension The Gifted existed in. It's a show that was meant to eschew any pre-existing continuity so it could tell it's own story, and it's a weird one, that's for sure. The show is engineered to be as weird as it can be, taking narrative diversions and follow strange tangents all to make a dreamlike world for the characters to exist in. It's compelling at times, but also obtuse and hard to get into all at once. Suffice it to say it's one of the least viewer-friendly superhero shows around, but that's part of what makes it so interesting.

Legion picks up with David Haller (Dan Stevens), a troubled man in a psychiatric clinic. For years he's had dark visions and struggled with his mental illness but, as we learn over the course of the first season, he's actually a powerful psychic mutant and, also, that he has an evil entity, the Shadow King, living in his head, messing with his memories as well as his perception of everyday events. In the hospital David is joined by Lenny (Aubrey Plaza), his friend (who is also a trouble drug user) who, sadly, died in the first episode but, somehow, comes back as mental visions that only David can see (making Lenny into a kind of sidekick for the character). And there's Syd (Rachel Keller), a woman with the ability to swap bodies with other people by touched them, who soon falls into a relationship with David.

As noted, the first season of the show is focused on David and figuring out just what is wrong with his mind (i.e., the Shadow King). Once the villain is revealed, a plan is then hatched between David, Syd, and a group of mutants they join with who work out of a compound called Summerland. Meanwhile, due to David's powers and the havoc he can cause, a government agency called Division 3 constantly pursues the mutant heroes.

This first season of the show is a well executed piece of mind-fuckery. Due to David's own mental issues (brought on by the Shadow King), you never are quite sure if what you're seeing is real or just a figment of David's mental illness. This is part of what creates the dreamlike quality of the show since you're never completely sure if we're seeing reality or not. Plus, the show has some of the most interesting visual design I've seen in years. It's not just the costuming and sets design, both of which evoke 1950s through 1970s deco and mod designs (despite the show ostensibly taking place in the near-future). But it's also accented by strange angles and lighting, weird filming choices, and Devil constantly putter in and out of his own mind and memories. It really is a trip. 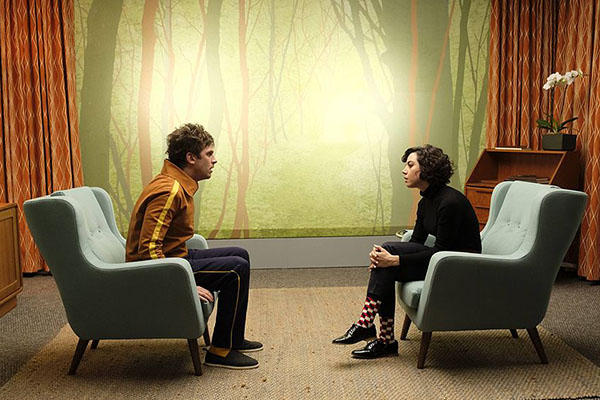 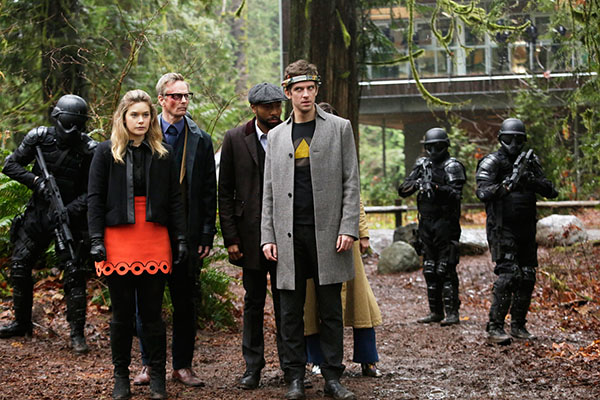 With second season, series creator Noah Hawley clearly wanted to push the dreamlike reality of his series. Second season finds out hero, David, pulled to the future to get a message from his girlfriend, Syd, who is attempting to divert a "bad timeline" from coming into existence. Due to these future machinations stress is put on David's relationship with present-Syd, a rifts start to get sowed between David, Syd, and the rest of the team. Meanwhile, the Shadow King has found a new host and is working his way across the world to find his original body and regain his full powers and abilities once more. Future-Syd tells David that he has to help the Shadow King find the body (which is part of what strains all of David's relationships), but eventually David comes to the conclusion that whatever is threatening the future, he doesn't need the Shadow King to help him take it out. This leads us to three factions working against each other, and a shift in the full dynamic of the show.

Part of what second season wants to do is cast David not as the hero of the series but, potentially, as its larger villain. We bonded with David as he struggled with the Shadow King in season one, but here there's a bit of a rug-pull, with the seeds being planted that David is the real evil and maybe he was better off being a mental patient in a home. Of course, because future events sent this timeline in motion there's also the possibility of this all being a self-fulfilling prophecy, that David only goes bad because he got a warning from the future and if he wasn't warned maybe none of what was to come could have happened. Again, there are layers upon layers of potential confusion with everything getting muddled on purpose just to confound the viewers.

While I like the trickery the show was performing, it did feel like second season dabbled too much in these narrative shenanigans. At a certain point all these diversion, loop backs, interludes, and call outs start to drag down the pace of the show, killing a lot of forward momentum (especially in the latter episodes of the series), without as much pay-off as one might hope. All these weird touches to the design and ambiance of the show certainly make Legion feel like it exists with its own reality but, even as someone that likes weird and strange shows, the series could get needlessly complicated. At times, to be blunt, it crawls up its own overly-designed ass and refuses to just tell its story. 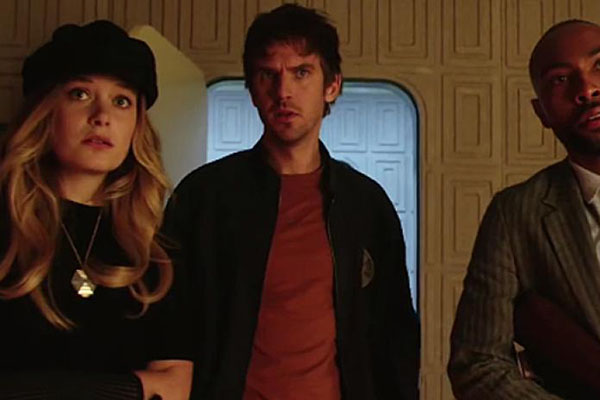 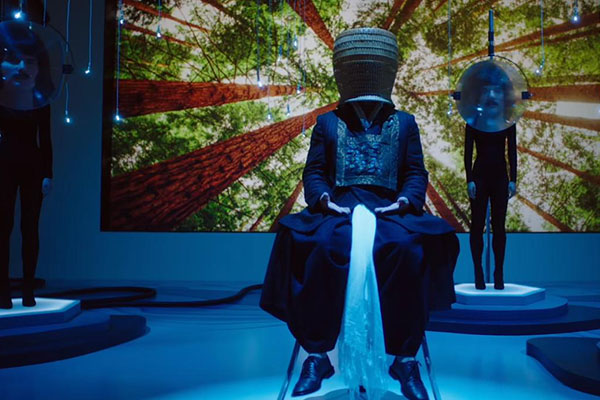 Long term I'm not sure if David is going to really be the villain or not (without spoiling anything the season season ends with that question very much interpretable in multiple ways). I know third season starts with a time jump of sorts and takes all the characters in very different directions so it's possible the answer is both "yes" and "no", depending on who you ask. What I do know is that the first season spent a long time getting us to like and trust David -- he's the central character and we spend the most time in his mind. It's probable that all the "David is the real evil" ideas are just planted seeds from the Shadow King and, long run, we'll find out that he's the real evil on the show after all. That makes more sense, narratively, than making the one person we truly like and care about, David, into a monster.

But maybe that's where the series really is going. And maybe that will lead to a satisfying ending in its own way. No matter what, as the show airs its third and final season (apparently the planned number of seasons for the show regardless of Disney's takeover of Fox and the X-Men brand) it's certain to be a strange and trippy ride. I just hope that this last season is able to focus on its story long enough that I don't get annoyed with it the way second season, at times, infuriated me. Just give me a story and then you can do all the weird touches you like.