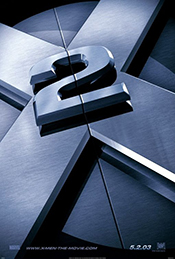 Meanwhile, Magneto (Ian McKellen) is trapped in his plastic prison, incarcerated there after the events of the first movie (plastic being especially effective, as he can't control it with his powers). His time in the prison isn't especially nice (the guards don't much care for him, and show it), but he's able to stage a daring escape (with a little help from Mystique, played by Rebecca Romijn-Stamos).

And, elsewhere still, Wolverine (Hugh Jackman) has come back from a trip (the Great White North, aka Canada) checking out an old military base to see if it jogged any memories stuck inside his head. It doesn't, and he comes back to rejoin the rest of the mutants at Professor Xavier's School for the Gifted. Once back, the story kicks up with an investigation into the assassination attempt on the president, an attack on the school, and a plot to destroy all the mutants. The X-Men, with a little help this time from the Brotherhood of Mutants, are needed again to save the day.

One nice thing about this movie, in comparison to the first, is that it's much easier to talk about the movie without giving anything away. A lot happens early on without it ruining later twists in the plot. It's not a mind-bending movie, but it's nice that there are little surprises, character moments, and strong scenes throughout the movie, moments that aren't spoiled by a general discussion of the flick.

And what a good flick it was. Often, filmmakers are quoted as say that their sequel will be better than the original -- rarely do they actually succeed at this lofty goal. Thankfully, X2 is improved in just about every way from the first movie.

For one, Wolverine (Hugh Jackman) is given a larger role in the movie, with more character development. Bryan Singer (director and mastermind of the first two flicks) obviously realized the screen presence he had with Jackman and figured he should maximize the character. Wolverine has his own plotline throughout the movie (tying in right to the end), making Wolverine feel like a primary character and not an outsider to the team (which he pretty well was in the first movie).

The rest of the cast is as good, or better than they were in the first movie. Obviously, Patrick Stewart (Professor Xavier) and Ian McKellan (Magneto) are consummate actors who could read the phone book and make it watchable. They once again show up in full force for the movie, with McKellan in particular chewing up as much of the silver screen as he can get away with without heavy metal poisoning. Halle Berry (Storm) and Framke Janssen (Jean Grey) are much improved this time around. Berry still isn't exceptional, but she's not a complete waste of celluloid either. Janssen proves to be much more compelling this time around, actually making you care about her character (through the power of acting), so that her big character moments near the end of the film have real resonance.

To note, I love how they brought Nightcrawler's powers to the screen. He's supposed to appear in a puff of blue smoke... well, okay, in the comics a it's a puff of magenta smoke, but I'm not enough of a fanboy to quibble about that. There are a number of ways they could have achieved this effect, to varying results. Thankfully, they are able to produce CGI that doesn't look like CGI, that looks like realistic smoke (that happens to be a nice shade of navy).

The rest of the special effects are on par, or generally better, than then first movie. Wolverine looks as good, effect wise, as he did in the first movie (he may looks good in a manly fashion, but I honestly wouldn't be able to judge that). Everyone gets to have their cool moments with cool effects, and they all appear convincing. However, personally, I didn't think Colossus (in his metal form) looked all the great, but my wife disagrees (whether this was because he wandered around, sans metal, without a shirt on could have something to do with it).

Bryan Singer did a great directing job in the first movie, and he's in just as fine of form the second time. His directing, paired with a good, fast-paced script, make for a movie that moves by quickly (even though it's longer than the first flick), never drags, and is worth watching again and again. This is everything the first movie wanted to be, streamlined because all that "origin story" stuff is already established and we can get down to the good bits right away.

There's not a lot that isn't good in the movie, honestly. Sure, the main villain isn't in much of the movie, and he's never a strong menace (although more effective than Doc Ock in Spider-Man 2), and the big climactic fight is over before it even really starts (especially sad when you factor in that a cool new mutant is introduced, and then dealt with, before they even really get a chance to get going).

But those are minor gripes in comparison to a much improved, and truly great, superhero sequel. If it weren't for the recent Batman movies, this would likely be my top superhero flick ever. Go watch it if you haven't already.