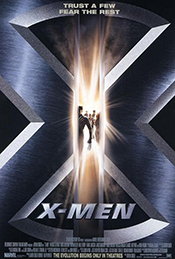 Humans have evolved, over the centuries, from the single-celled organism to the dominant species on the planet (at least until the dolphins decide to build weapons and take over the world -- don't think I'm not onto them!). But, over the last few centuries (really, about 10 millennia or so) humans haven't evolved much at all... or so we think. What if some genes continued to evolve, and only recently show themselves in greater and greater numbers; and what if these evolutions, these mutations, granted the "mutant" amazing powers?

That is, more or less, the basic premise for X-Men (and, really most of the Marvel Universe, but that's a topic for a different article). Professor Charles Xavier (Patrick Stewart) set up a school to teach "gifted" (read mutant) students how to use their powers and survive in a society that hates them. He also is the mastermind behind the X-Men, a team of mutant superheroes (Charles is also a mutant himself -- the most powerful mind-reader/psychic in the world).

Standing against the X-Men are the Brotherhood of Mutants, a league of mutants that think they, not normal humans, should be in charge of the world. Lead by Magneto (Ian McKellen), a mutant with the ability to control magnetic forces and, thereby, all metals, wants to show humanity just what it's like to be a mutant, and he has a plan to do just that...

The summary gives a good outline of the movie, although there's a lot it leaves out (and not just for the sake of spoilers). To start, it leaves out the real star of the show, Wolverine (Hugh Jackman), an amnesiac mutant with wicked metal claws and an ungodly healing factor (he can regenerate any damage he takes).

Also not mentioned above, but an important character nonetheless, is Rogue (Anna Paquin), our everyman character. She's a burgeoning mutant who has just discovered her powers. Through her we learn about the world of mutants, the school, and the lengthy battle between the X-Men and the Brotherhood of Mutants.

Really, much of the movie rests on the shoulders of these two characters. Thankfully they, along most of the cast, deliver commendable performances. Hugh Jackman gives Wolverine all the ferociousness and bluster the character should have (and if you've ever read the comics or saw the '90s cartoon, you'll know just how Wolverine should be portrayed). He is able to give Wolverine depth and soul -- having a few quiet scenes where the character can let out something besides his claws -- but when it's time to kick ass, Hugh makes Wolvie a force.

Anna Paquin, as Rogue, is equally good, although her role is considerably smaller in the movie. She doesn't get to do much fighting (her powers, giving her the ability to copy other mutants' powers temporarily, make her more useful as a secondary fighter), but she does get to act. Rogue is a flawed character, unsure of her place in the world, where she wants to go, or how to deal with these powers she never asked for. Paquin gives her the emotional turmoil required of the role. In lesser hands, she'd come off as whiny and annoying -- Paquin's Rogue is neither.

Patrick Stewart and Ian McKellen are good in nearly every movie they're in, so having them be good here is no big accomplishment (but I don't mean that in a bad way). You can literally turn the camera on these two and they'll command every scene they're in. Thankfully, they are both in good form in this movie, and their scenes are engaging.

The weak links in the cast are definitely the rest of the X-Men. James Marsden (as Cyclops, the guy that can shoot eye-beams) is supposed to be the leader, but he seems confused and lost in the role and his Cyclops is neither commanding nor interesting. Most of his scenes are either bland or tiresome... or both. Halle Berry is equally terrible in her role as Storm (the girl that controls the weather). She's never interesting on screen, although, to be fair, I've never seen a movie where I really thought Berry did a good job. Famke Janssen as Jean Grey (a telekinetic and mind reader) has some of the meatier scenes, playing opposite Wolverine as his love interest, and while those scenes are great, she seems out of her depth playing a convincing mutant. Most of her "power" scene are just kinda hokey.

But these three cast members, although prominent, are not bad enough to drag the movie down. The movie is well written and well directed (courtesy of Bryan Singer), and never really slows down enough to become boring (even if some of the characters aren't that fun to watch). When the action picks up, the movie gets even better -- usually because Wolverine is the one kicking ass.

And while we're on the subject of the action, the action is brought together nicely by the special effects. It was a fear, when watching the movie the first time, that production staff (for instance) wouldn't be able to make Wolverine's claws convincing -- that they'd just look like crappy plastic things attached to his hands. Thankfully, the special effects are great (Wolverine's claws look vicious, not hokey).

Every mutant power is brought to the screen in a way that makes them seem realistic. From Storm's weather powers (where-in the people thrown around by her wind don't look like they're on wires) to Cyclops's wicked eye-beams, to the villains and their increasingly bizarre and fantastic powers (one villain, Toad, has the power climb walls and use a huge tongue, which shouldn't look nearly as good as it does), everything works well and doesn't pull you out of the movie.

With a lesser cast, in lesser hands, this movie could have been terrible, but it has the right mix of acting, story, writing, directing, and action. It's one of the best of the superhero genre because of this, and if you haven't seen it already, you need to.