We've Got a Floater

If the original Jaws is held up as a classic of the form (whether that form is disaster movie, monster movie, or serial/slasher is up to the viewer), it's third sequel, The Revenge is considered to be one of the worst movies ever made. It's widely panned, hated by just about everyone, especially fans of the original movies. Ask a Jaws fan and you'll often be told that it's a travesty, a film so bad it had to kill the franchise. Obviously I was really looking forward to watching this film. 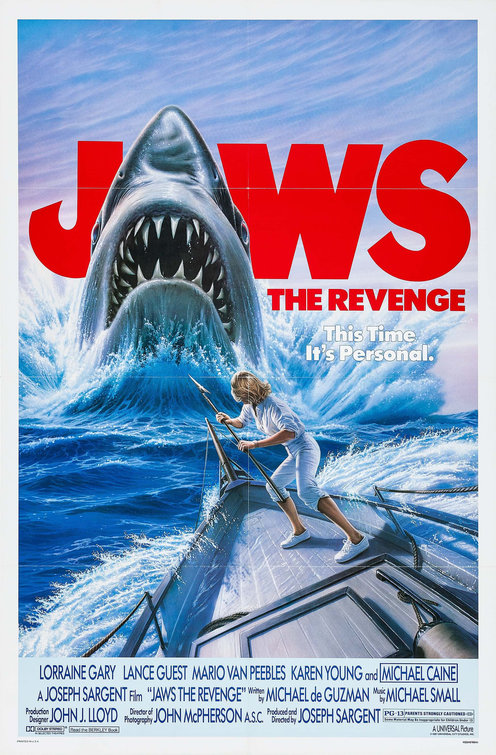 Going in, though, I wasn't presented with a movie so bad it deserved all the bile and outrage The Revenge seems to prompt. That's not to say it's a good movie, it really isn't, but it's not worse (or better) than, say, Jaws 2 or Jaws 3-D. It's greatest sin is that it's kind of boring, pretty tedious at times, but then that's a accusation the other Jaws sequels could have laid against them as well. The film isn't Mystery Science Theater 3000First aired on the independent TV network KTMA, Mystery Science Theater 3000 grew in popularity when it moved to Comedy Central. Spoofing bad movies, the gang on the show watch the flicks and make jokes about them, entertaining its audience with the same kind of shtick many movies watchers provided on their own (just usually not as funny as the MST3K guys could provide). It became an indelible part of the entertainment landscape from there, and lives on today on Netflix. bad, and I found that more disappointing than anything actually happening in the film.

Jaws: The Revenge opens around Christmas time (so make sure to add this to your holiday collection). Sean Brody (now played by Mitchell Anderson), younger son of original hero Martin Brody (deceased here), is working as a deputy for the Amity police. He has to go out one night on the water to take care of some debris disturbing a buoy and, wouldn't you know it, a shark magically shows up and eats him. That's the danger of living in Amity. Sean's mother, Ellen (a returning Lorraine Gary), is freaked out, of course. She starts ranting to everyone about how they need to avoid the water because it's curse; sharks obviously have it out for the Brody family. Eventually her son, Michael (now played by Lance Guest), convinces Ellen to come visit for the holidays at his place in the Bahamas. The waters there, he says, are warm and great white sharks hate warm water. It'll be totally safe.

Or so they think because, wouldn't you know it, a great white shows up in the Bahamas soon after the Brodys arrive, and it seems like this shark is specifically hunting the Brodys. Soon enough Michael and Ellen have to go out on the water to find the shark and stop it before it manages to kill the whole family and everyone ever associated with them, too.

Let's get the dumbest part of the movie out of the way up front: yes, this is a movie about a shark that swims half way around the world to chase down an entire family of survivors of a previous shark attack. There's no explanation for why the shark does this, nor do they even try to stop the associate between the shark attack that opens the movie up in the wintry north and then the other shark attacks down in the Bahamas. We're left to assume it's the same shark and that, somehow, he just really had to get some of that sweet, sweet Brody meat. So he swam there and arrived not long after they did, all without the aid of GPS or any other clue to say, "hey, maybe swim to this climate you hate out of revenge!" It really is astoundingly stupid. 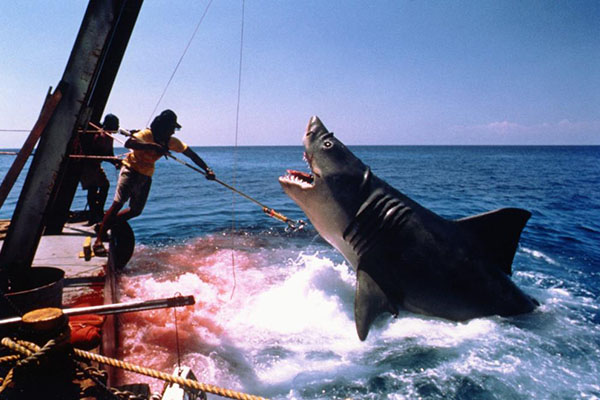 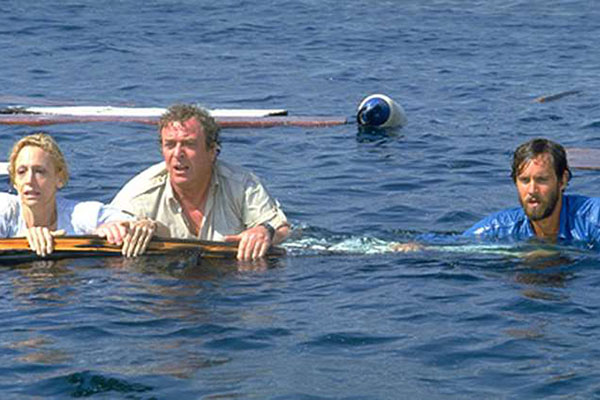 But is it more stupid than one family already having survived three great white shark attacks before this? It was already stretching believability with a second great white shark showed up in Amity (Jaws 2), and then for Michael to see another one, let alone two, during his time in Orlando (Jaws 3-D, it renders this whole series stupid). So another shark showing up and going on some kind of mystical revenge fantasy doesn't really break my immersion at this point as that would imply I had any immersion with this series at all.

And, yes, it really is a shark motivated by a mystical need to get revenge on this family that has already, somehow, killed three sharks before. That's from the producers who stated they wanted to do something new with the series so, in their own words, their worked in a "mystical" element to the shark. It's a "magic shark" that comes after the Brodys, as stupid as that sounds. And yet the sharks from Jaws had already been rendered into slasher killers by this point. Considering that the Nightmare on Elm StreetThe brain-child of director Wes Craven, A Nightmare on Elm Street was his answer to the glut of Slasher films that were populating the multiplex. His movie featured an immortal character, Freedy, with a powerset like none other, reshaping the expectations for Slasher movies to come. and Friday the 13thOne of the most famous Slasher film franchises, the Friday the 13th series saw multiple twists and turn before finally settling on the formula everyone knows and loves: Jason Voorhees killing campers 'round Camp Crystal Lake. series each feature mystical serial killers, this detail really didn't bother me. So the shark is magic; I've watched dumber things by this point.

What annoyed me about the movie is just how slow it is. When you come to a Jaws movie you expect a lot of carnage but despite this film being all about a shark on a bloody quest for revenge, not much actually happens in The Revenge until basically the last part of the last act. In that respect it's a lot like another terrible disaster movie, Avalanche. Instead of getting in as much shark carnage as possible (what should be the modus operandi of the film) we mostly get a love story between Ellen Brody and dashing pilot Hoagie Newcombe (Michael Caine). I actually didn't hate this plot line and, honestly, featuring a love story between people past a certain age is commendable as this kind of story isn't told enough in popular media. It just seems like padding in this movie.

Put another way, this film lacks focus. We have the shark, and the Ellen/Hoagie story, and Michal (not a marine biologist instead of an engineer as he was in the previous movie) and his quest to study undersea snails, plus his wife and her art business, and this obnoxious little tot. There are a lot of characters, all pulling at the main narrative, all diluting the power of the main story about a mystical enraged shark. Do I think the shark needed to be magic? No, but if you're going to give me a magical shark the least you can do is make it the focus on the movie. Jaws: The Revenge fails to do this, instead getting mired in a lot of stories that have nothing to do with shark mysticism. Clearly the film didn't understand what is should be. 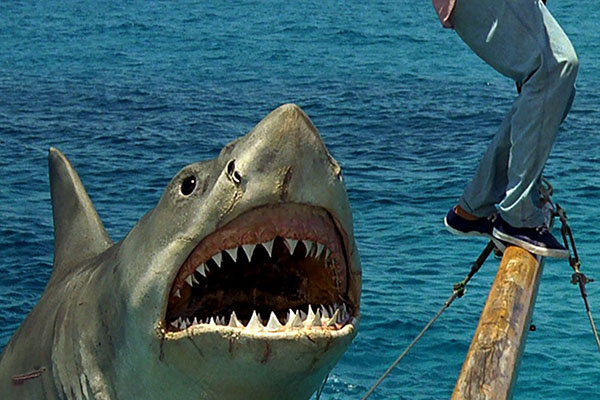 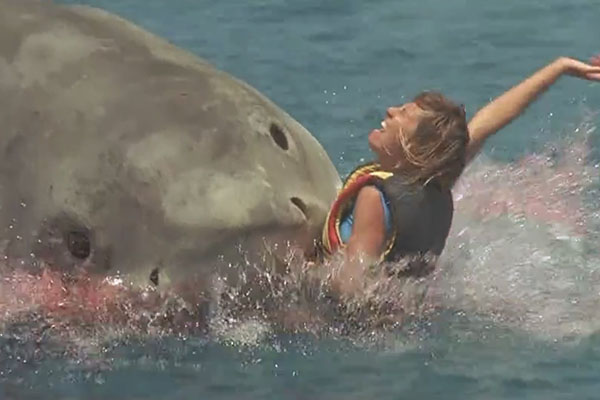 There are elements of Jaws: The Revenge that could work. Michael Caine, naturally, turns in a great performance and if his story with Ellen had been the focus of a different, shark-less movie, that could have actually been fairly watchable. Or, if the film had been willing to go full bat-shit crazy and just embrace the stupidity of the mystical shark premise, that could have been something. A magic shark movie sounds incredibly dumb, but also amazingly watchable. Any of these ideas, though, would be better than the tedious mess that we got.

Jaws: The Revenge is not a great movie, but it's not so bad that I feel like really lambasting it. It's mediocre, a tragic way for the series to go out. Really, though, the Jaws series had been trending downwards as soon as the credits rolled on the first film. None of the sequels rose to its level, so it was inevitable that a movie this inept, this tedious would come out. I find it hard to hate this movie simply because I don't have strong feelings for or against it; it wasn't interesting enough to warrant strong feelings of any kind. I guess I can see why people hate this film so much, I just can't motivate myself enough about it to care. If only it had been as terrible as I'd been promised.