Considering how popular Jaws, it's amazing how there haven't been that many killer shark movies to show up since. Sure, there have been plenty of imitators, from Orca: the Killer Whale, to Piranha, to Killer Fish, but very few other movies went right for the toothy monster itself. It's like they wanted to clone the intent of the movie but not be so uncouth as to actually directly copy the subject matter. 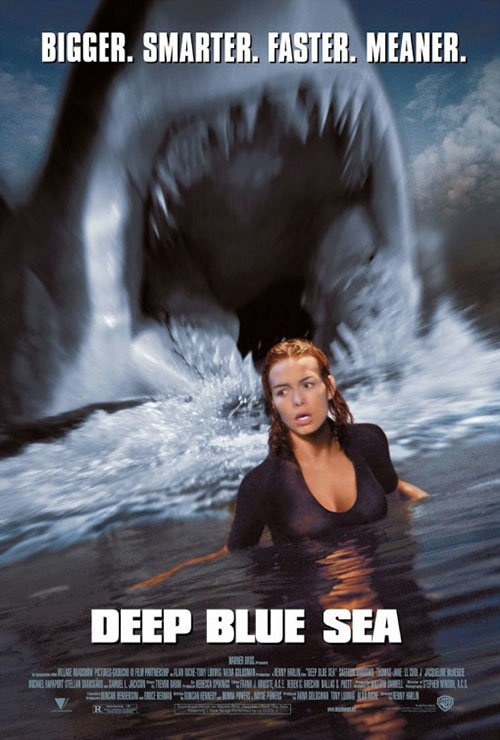 Eventually, though, that opinion shifted. Universal stopped making Jaws films after the universally reviled The Revenge (a film we thought was bad but not nearly as terrible as everyone says), do once an appropriate amount of time went by, the window was open for a different group to step in and make a killer shark movie. Enter Deep Blue Sea and very 1990s take on the formula, blending the carnivores with bad sci-fi and cheesy special effects for a film that feels like it couldn't have come out at any point other than during the Clinton era.

In Deep Blue Sea we're introduced to Dr. Susan McAlester (Saffron Burrows), a genetic scientist dedicated to finding a cure for Alzheimer's (and other degenerative brain diseases). Her master plan for this is to run experiments on sharks (mako sharks, specifically, although their sea-based lab does have other sharks in captivity as well) since shark do not suffer any kind of degenerative brain disorders as they age. The thought is that if they can somehow use clinically treated brain goo harvested from sharks they can revitalize dead brain tissue. To get enough of a sample size to run their tests, though, McAlester, along with her colleague Dr. Jim Whitlock (Stellan Skarsgard), perform illegal genetic experiments on the sharks -- it makes the sharks' brains larger, producing more brain goo, but it also ends up making the sharks smarter. Much smarter.

And wouldn't you know it, when a massive storm moves into the area of the sea base, the sharks use it as an excuse to try and break out of their pens. The sharks use tricks, wiles, and deception to attack and herd the humans, making the fleshbags do their bidding all so the base will sink, the fences will lower, and the sharks will escape. Before the sharks can do all this, though, the humans have to find a way to the surface and stop the sharks. If somehow even one of these super smart sharks escape, it could be horrifying. It's man vs super-shark for the fate of the world.

Or, at least, I think that was the intent of the ending of the movie. The scientists for much of the film are just worried about escaping the lab and not getting eaten by sharks. It's only in the last few minutes (when the ending of the film was re-filmed, apparently) that the big "we have to defeat the sharks or else" plot line was rolled in. But I can't say that it makes a lot of sense. Sure, if one of these sharks got out it could eat a few people. it would also breed with local sharks and, for a time, make a group and fairly smart super-sharks. But, after a while the sharks would breed so much that the genetic stock will thin and then we'd just have a few sharks marginally smarter than expected and, well, that's it. No real worry there. 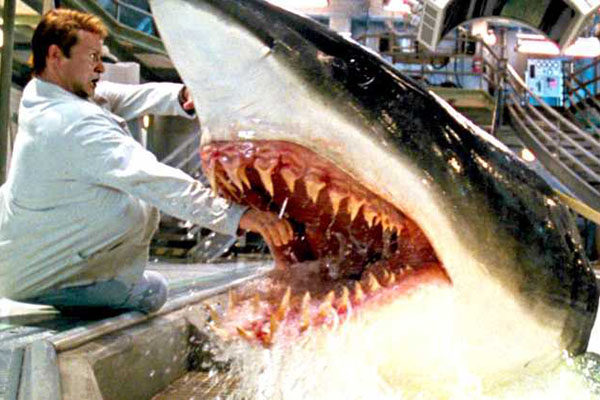 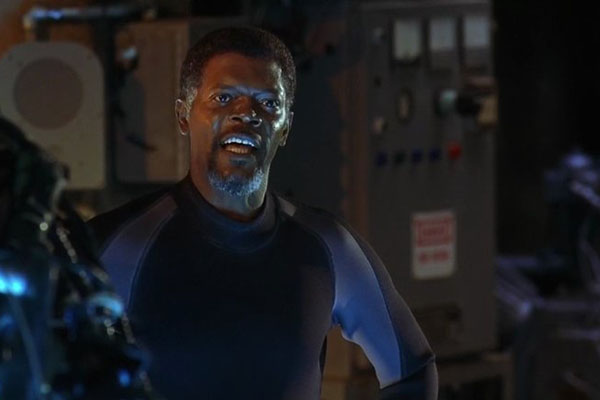 The scientists act like the sharks getting out is a huge deal, but let's be clear about this: smart as they are they're still just sharks. It's not like they have legs so they can get on land, so we don't have the same worries here as we would in the Jurassic ParkWhile ever kid has dreams of seeing dinosaurs, Michael Crichton gave that dream a reality, at least on paper. His two Jurassic Park books spawned a movie franchise that's gone five movies strong (with no signs of slowing down), all because people love seeing dinosaurs made flesh. series. They also don't have opposable thumbs so, no matter how malicious they are, they aren't as much of a pest as the critters in Gremlins. Hell, one loose, normal-sized smart shark seems a lot less shark than the beast from The Meg. Sure, that one super-shark can be terrifying, but I don't think it's worth sacrificing everything to try and stop it from escaping. After a couple of weeks swimming around and getting busy with other sharks, the super-shark would probably get bored with humanity and never be seen again. It's a problem that takes care of itself.

Meanwhile, the scientists in the movie are generally stupid all around. These are people capable of breeding super-sharks, mind you, but they can't navigate their way out of a paper bag otherwise. Their sea-base is only three floors, mind you, but the second the sharks somehow cause an explosion (they manage to drag the tow line of a helicopter towards and building, a feat a normal sized shark should not be able to do, mind you), the scientists seem lost in their own building. It's not even a very big base, but they spend most of their time dawdling back and forth, unsure of where to go or what to do. More often than not they do stupid things that put themselves in danger and only lead to them getting killed. They have the survival instincts of teenagers at Camp Crystal lake without any of the likability.

The charisma of the characters is a major issue with the film. There are two characters actually worth caring about -- Thomas Jane's shark wrangler Carter Blake and LL Cool J's cook Sherman "Preacher" Dudley -- and everyone else in the film is either cold and uncaring ice queen (specifically the lead doctor) or a total nut-case the second things start falling apart. There's no real middle ground for most of the cast which means you don't care when they all start dying. There's plenty of gore (like when a doctor loses an arm to a shark) and some decently suspenseful moments (the section in the elevator shaft with water rising in one direction and a fire descending in the other being a highlight) but because you don't care about any of the characters you hardly worry about if they're gonna live or die.

This was actually the main reason why the film went through re-shoots for the ending. In the original cut (spoilers for a near-20 year old movie) Susan survived, the third hero to make it through the movie. Audiences hated this because they felt she was an ice bitch and everything in the film was her fault -- she needed some kind of comeuppance in their eyes. So the ending was changed and Susan sacrifices herself to stop the evil shark from escaping. The thing is, watching the film again, I didn't think Susan actually deserved to die. Sure, she made the sharks but the film does a good job of giving her a back-story that explains why she felt it was a good idea -- not for money or power but because she'd watched her father die from Alzheimer's. 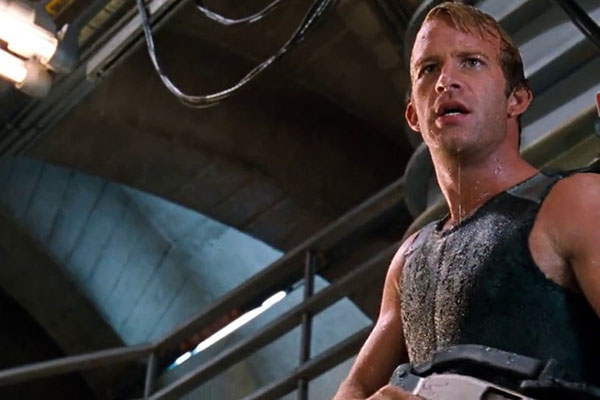 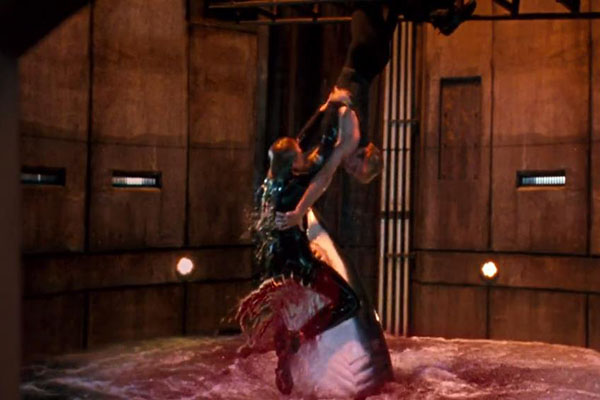 This was an issue she cared about but once it comes out all the characters blame her, this despite the fact that she made the sharks with the other doctor. And hell, everyone else worked in the base and they never once thought to question how the sharks were bred or why all the sharks were super smart? They never once raised a question? No, instead everyone in the film, and the original audiences, just blamed Susan but the film really doesn't do a good job of selling that. The film makes Susan a devil, and then a martyr, when really she was the hero of the film.

That leaves us, then, with a shark film where everyone is an idiot and we don't really have anyone to care about. Thus the film had to deliver on the scares and the special effects, and, honestly, it does neither at this point. Admittedly this was a film from 1999 so the CGI effects can't be expected to hold up at this point but even with tempered expectations this film looks bad. Everyone is so fake, like it was filmed by the same guys that made Jaws 3-D (heck, at times that older film looks better). Once you strip away the techno-babble and sci-fi trappings, all you're left with is a shoddily-made B-move shark film without the style or substance to make it interesting.

It's funny because back when it came out I rather enjoyed Deep Blue Sea. I was 18 at the time, and even then I knew it was a bad movie, it was just delightfully bad. The years have not been kind to this film, though, and what was once an enjoyably stupid movie is now just stupid. It's sad, really, but Deep Blue Sea just isn't fun anymore. It's poorly made, ill-conceived and, as far as the heroine is concerned, mean-spirited. I honestly was better off watching The Meg.