Going in to the Jaws series, I knew there would be a distinct drop in quality as the series went along. Although the first film is still hailed as a classic of horror cinema, you don't really hear much discussion about the later movies (no matter what Back to the Future II might thought, the Jaws series is not an ongoing, perennial classic). Certainly the second film isn't anywhere near as good at the original, and I knew the fourth and final film, The Revenge, is considered a total bomb. The third movie, though, rarely comes up in conversation. 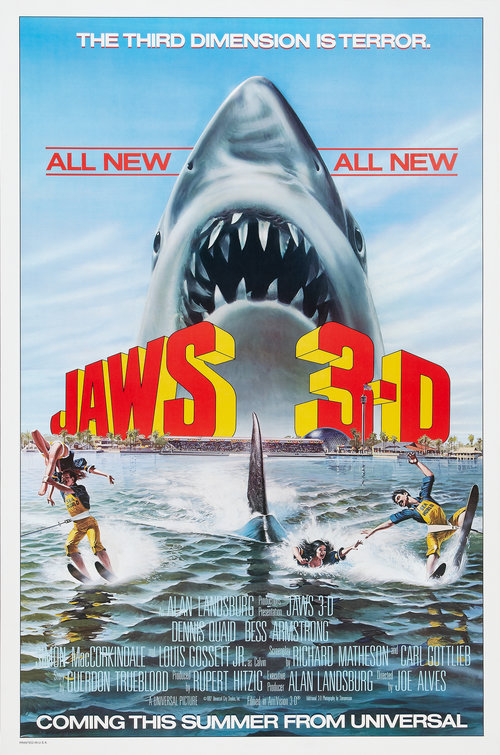 Apparently that's because the film is bad in a way that few people can appreciate. It's not a terrible, unwatchable film (which, I'm expecting, is what I'm in for when I finally get around to The Revenge), but a cheesy, goofy film that didn't have the technology and effects budget to pull off its various planned scenes. Its dumb and silly, but it had heart and imagination. Honestly, what it most reminded me of was the Roger Corman cheapie Lords of the Deep (which we watched as part of our regular Mystery Science Theater 3000First aired on the independent TV network KTMA, Mystery Science Theater 3000 grew in popularity when it moved to Comedy Central. Spoofing bad movies, the gang on the show watch the flicks and make jokes about them, entertaining its audience with the same kind of shtick many movies watchers provided on their own (just usually not as funny as the MST3K guys could provide). It became an indelible part of the entertainment landscape from there, and lives on today on Netflix. coverage), just with better actors in all the major roles. Honestly, this movie certainly proves that good actors can elevate and otherwise terrible film.

The movie starts off well enough, introducing us to the new setting for the third film: SeaWorld Orlando. Working at the park is Mike Brody, son of police Chief Brody from the first two films (and here recast with Dennis Quaid). Brody is the chief engineer for the park and has overseen the construction of an entire underwater lagoon complex with tunnels, animatronics, and plenty of fish. It's quite a marvel, one that the park owner, Calvin Brouchard (Louis Gossett, Jr.), spared no expense upon. Also working at the park is Kathryn Morgan (Bess Armstrong), a marine biologist who oversees all the animals at the park, and she's also Brody's girlfriend. Things are going well enough at the park, with Brody and Morgan getting everything ready for the Lagoon unveiling, when an unexpected intruder arrives: a great white shark. Soon, bodies are dropping and people are freaking out, but it all ends pretty quickly when the shark is caught.

Seeing the value in having a live great white in captivity, the shark is saved (not killed) and turned into an exhibit. The park then opens, as expected, for the summer. Unfortunately the great white that was caught isn't the real danger; that would be its mother, who also came into the park and is now ready to eat her way through an entire stable of captive humans. People get trapped in the Lagoon, blood and viscera start flying, and soon Brody and Morgan have to take matters into their own hands to save the park, and themselves, from the enraged fish.

The first thing the film does right is moving the action away from Amity. The fact is that having two films set at the same location, both featuring attacks by a great white shark, stretched plausibility. If they'd tried for a third it would have been laughable. In the last 200 years there have only been a reported 31 great white attacks, and that's largely because great whites don't really seem to care much about humans -- we're just not high on their preferred feeding list. In the cases where one of these sharks does go after a human, it's unlikely to make a habit of it. It's even more unlikely that two of these sharks would both suddenly go for humans as a regular dietary choice. So, yes, moving the action away from Amity was smart simply because there was no way a third one would have been even remotely realistic. At least setting the action in regularly used waters, with other sea animals around, sets a bit of the groundwork in place for while a shark (and her pup) would venture into SeaWorld. 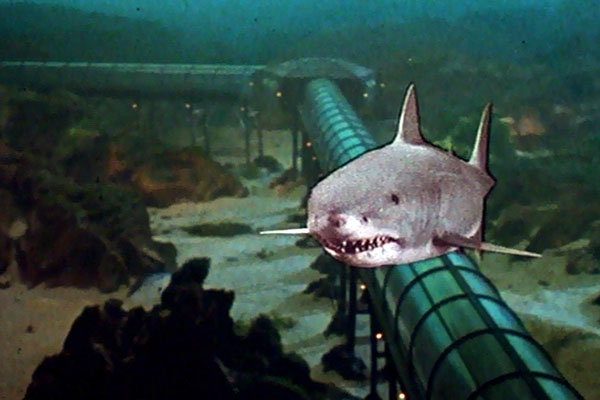 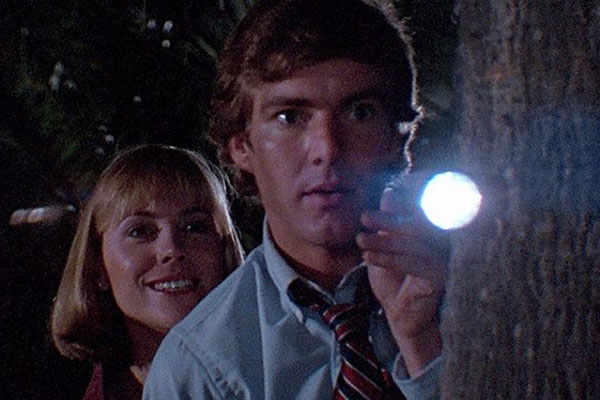 The movie also nabs some pretty good actors who help invest the movie with stakes. Because of the performances of Quaid and Armstrong you end up investing in the characters and the setting which goes a long way towards getting you interested in the big, dumb shark story. Even Gossett, Jr., who basically has the "scummy owner that will get served righteous justice in the third act" role, manages to make his character likable enough that you actually don't want him to die. There are a lot of good actors in this film, all of whom are too good for this stupid little movie.

And it is a stupid little movie, which becomes evident once Brody and Morgan venture in to the Lagoon for the first time. Jumping in to a submersible to explore the terrain and see if they can find an employee they feared might have drowned (he didn't, he was eaten by a shark), we are immediately treated to crappy miniatures, simple animatronics, and a whole lot of green screen compositing. Right before that point the movie actually seemed like a pretty low-key, serious drama, but once the submersible hits the screen we're suddenly in a corny sci-fi flick and the movie never really recovers. There's a disconnect from that point forward between the scenes filmed live at SeaWorld and all the section done on sound-stages or withe miniatures, a constant shifting of style and tone, that drags the film down.

For most audience members, these sequences would have to be a total deal-breaker; the film just gets so bad, so quickly, and never really recovers from it. For me, though, I actually found the film endearing. It became craptastic, like the best Mystery Science Theater Films, which made it infinitely more enjoyable for me. If the film had just stuck to being a low-key shark film, I would have been bored out of my mind. But because it went for silly, schlocky special effects, I suddenly found myself investing in all the crappy wonders on screen. I'm pretty certain my reaction is not normal.

The thing is that the film doesn't really need the sharks this time around. It was actually build a decent little drama about the trials and tribulations of opening a new exhibit at a water park. And entire plot line in the third act is devoted to rescuing people from a park attraction, like any normal disaster movie. If this had been the focus of the film it might have worked. It wouldn't have been a Jaws movie, sure, but it might have been half-way good. It could have been cheesy in the same way as Towering Inferno or Avalanche (although presumably better than the latter) and it would have been fun. 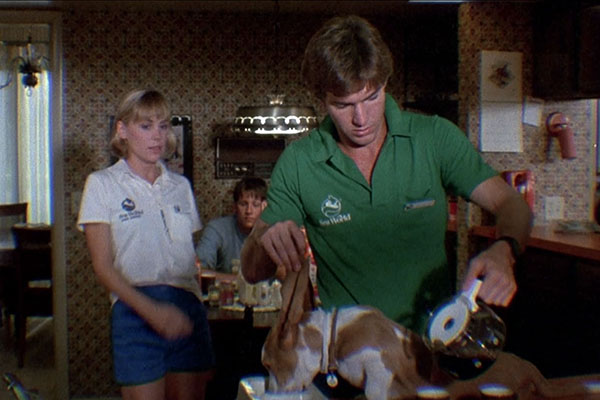 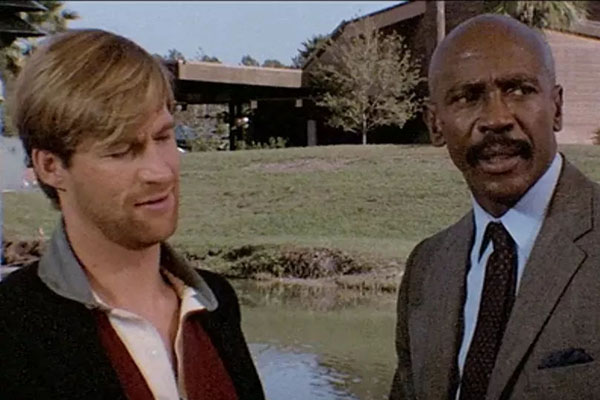 But then the shark shows up, and all the life drains out of the movie. Instead of focusing on the characters, or the setting, the movie becomes all about the shark and the death and destruction it brings in its wake. The shark isn't interesting, not like the other parts of the movie were, and with the film devoting so much time to this bland animatronic fish, the film loses all its energy. What was a half-way good flick (which endearingly cruddy special effects) becomes a dumb monster movie with no style or class.

Plus, the 3-D effects are just as dumb here as they have been in other monster/slasher flicks I've reviewed for this site (Friday the 13th Part III and Freddy's Dead: The Final Nightmare). Every time the film puts in a 3-D effect it's so glaringly obvious, with little flair or style to how its done. I get that every few years 3-D makes a comeback and everyone is suddenly entranced by it again. Those of us that have to go back and watch these films after the fad has died off, though, would prefer not having to suffer through this tacked on crap.

I enjoyed Jaws 3-D for what it was -- a cruddy, dumb, silly movie with directionless 3-D effects -- but I enjoyed it because I was cracking jokes at the film and delighting in its awfulness. I constantly expected Jonah and the Bots to show up at the bottom of the screen, a row of seats accompanying them, so they could heckle the movie along with me. Jaws 3-D is a bad movie and unless you're comfortable with enjoying endearing cheese, this film is not for you.