We talk about how bad movie adaptations of video games can be (see: Street Fighter, but let's be clear that video game adaptations of movies can be equally bad. It seems like video games based on movies should be a slam dunk -- movies are just cut scenes and then you stitch some game play around them -- but more often than not these games became bargain bin fodder. Certainly the biggest, and most well known total failure of an adaptation was Atari's E.T.: The Extra Terrestrial, but other, really awful games have come out in just about every era of video games.

We recently touched upon The Karate Kid, the NES game from 1987 produced by LJN, the perennial trash-producer of the NES era. Now we're going to look at Jaws, from 1987 produced by... oh, look at that. It was made by LJN. Of course it was. LJN made countless NES adaptations of big movies, although "made" is really using that term loosely. The company would snatch up licenses, finance games quickly to tie into those big upcoming movies, and them dump them on an unsuspecting, and unwilling public, so they could quickly reap in the dollars. And, for a few solid years it did work. Their games were almost never good, but because they had a name on the cover that kids recognized, the games did sell.

How bad could these games get? Well, you can just look at The Karate Kid as an example, or the nigh unplayable Back to the Future, among many many other awful and punishing titles. Sometimes they did happen into something kind of okay -- I rather liked Friday the 13th and A Nightmare on Elm Street has its fans, but the LJN games generally weren't worth more than a five minute play before being consigned to a shelf, never to be touched again.

Jaws, curiously, falls somewhere in between. If you know what you're doing you can play through the game in as little as five minutes (current world record is under three-minutes-thirty). Of course, figuring out what to do to actually complete the game can be a pain. And yet, if you get into it, and start to learn all the pleasures of the game, you can find something fun enough to play through. It isn't more than a small diversion, but it can be a quite enjoyable one at times.

Although it was released to tie into Jaws: The Revenge there's very little of that movie in the game. Hell, there isn't actually any plot in the game at all as you're just dumped on a small (very small) patch of ocean to find and hunt the great white shark. You do this by sailing around and, in effect, waiting for the shark to attack you. Although, realistically, if you just do that you're going to lose as the shark will overpower you and you die (having played this way back as a young kid, I can attest to that result). 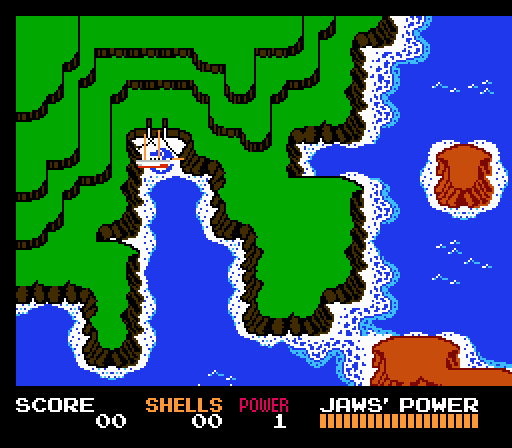 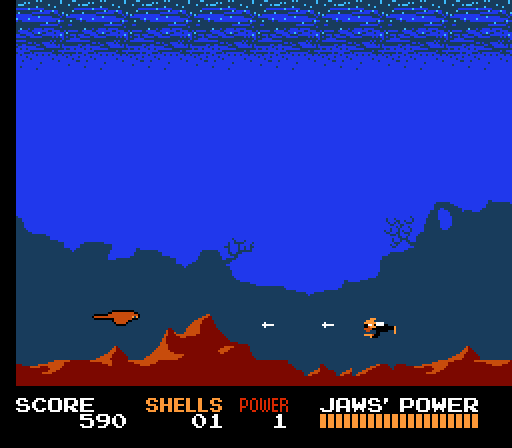 What you actually are meant to do is sail around the ocean looking for shallow reefs to explore. Crash into one of them (literally you get the message "you hit something") and you're taken to a side-set shooter sequence. You play for a bit, shooting whatever fish or other creatures move, via your little underwater diver with a harpoon, and sometimes they'll drop shells to collect. Get enough points in the shallow reefs and you're taken to a mini-game where you fly over in your plane, dropping bombs on jellyfish (for... reasons) and earn more shells.

Does any of this sound like Jaws: The Revenge? No? Well, we're sort of getting to that part. Shells in hand, you can now go to the various docks on the water and park your boat for upgrades. Shells are your currency and you can buy items like radar (to detect Jaws) along with upgrades to your power level (so you do more damage). There's also a mini-sub you can find, which upgrades your damage further (and acts as a kind of extra life). Equipped and ready to go, now it's time to take on the big fish.

At this point now you just sail around, trying to use the radar to find jaws. It'll pulse in the bottom of your HUD, and the closer Jaws gets, the more it'll beep. Or, at least, that's the theory. I tend to find he just randomly attacks, though, and then you're in for the battle. Here we get another shooting section (seriously, that's the main mechanic of the game) where you're fighting against Jaws as he swims back and forth across the screen. The goal is to do enough damage that his health meter runs out, which will then take you to the final sequence.

Now we're in a 1st person perspective with Jaws slowly swimming towards you while you aim the prow of your ship at him. Stab him with the poky bit at the end, Jaws will die, and you'll win. Which, actually, sounds more like the first Jaws and not it's sequel, even though you then fly off into the sunset like it's the last film in this series. Wow, this game is really confused about while movie it was adapting. 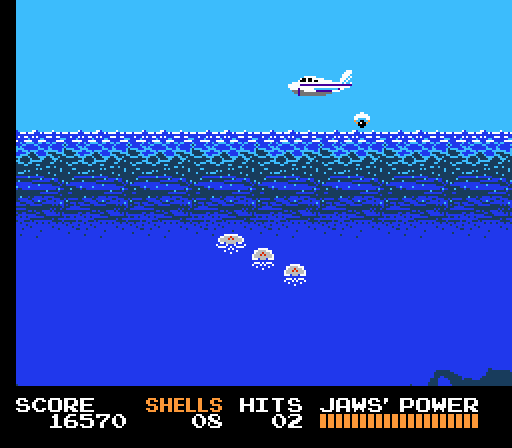 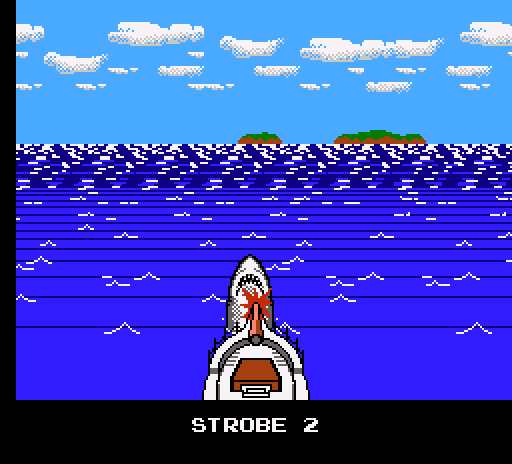 The game isn't deep by any measure. Seriously, it probably took you longer to read that summary of the game than it would take you to play it, which is a really sad feat. The layout of the game is confusing, and it never really tells you what to do or what the goal is. You just get to sail, swim, and shoot until something clicks together in your head. That can make an annoying and frustrating experience, no matter what age you are when you first discover this game. Seriously, this is why the game has such a bad rep.

And yet, I don't actually hate this game. The swimming sections have a quite peacefulness to them, mild shooting in a classic arcade style. It's never overly taxing or hard, and you can just kind of enjoy the silliness of what you're doing. It's a bad Jaws game, that's for sure, and it's not even that great of an NES game, either. But for an LJN Game made in the height of the NES era... eh, I've played worse.