The Old and the News All at Once

When David tennant stated he was leaving the role of the Doctor it left many fans wondering just what the show was to become. While Christopher Eccleston had been the face of the relaunch, his one season was more of a footnote in comparison to the long stint then held by Tennant. For many, Tennant was the Doctor and it was hard to imagine a version of Doctor Who that could go on without him. No one could play the Doctor the way Tennant had. 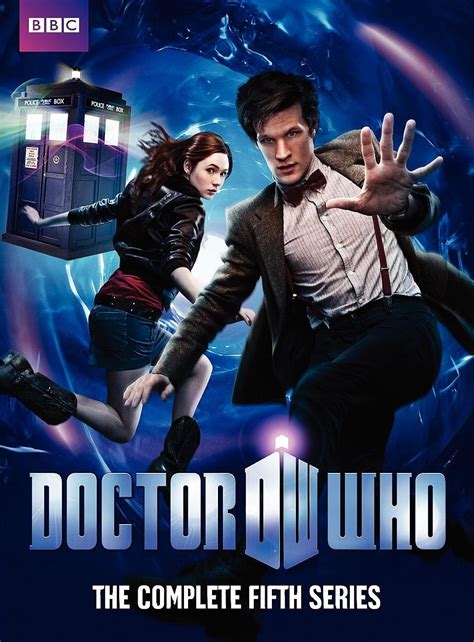 That is absolutely true, but that's also the thing about the regenerations: each actor (or, recently, actress) to come into the role made it their own, finding their own twist on the Doctor that made the character, and the show around them, fresh and new again. Matt Smith didn't try to do a riff on Tennant (any more than it felt like Tennant did a riff on Eccleston's Doctor). Instead, Matt Smith found a way to imbue qualities of both old and new in the character, giving him a deep and knowing age that was coated under a youthful glee for exploration. It wasn't Tennant but it was magical.

I won't lie: when it comes to the new version of the show (2005 and onward), Matt Smith is my favorite actor to take on the role of the Doctor. There's something manic and exciting about his character, a guy who has seen everything and been around for ages but can still be surprised by new little twists and turns. "I honestly don't know what to do... ooh, that's new and exciting," he says at one point with a smile. Smith's Doctor wasn't so much of a break from Tennant that he felt like a completely different character (both were a far cry from the version played by original actor William Hartnell, of course), but he did find his own twist to make the character fresh and new again.

Part of what helped Smith and his version of the Doctor was the team behind the scenes. When the exit of David Tennant series shepherd Russel T. Davies also left the show and that allowed Stephen Moffat to come in and put his own twist on the formula. I have lamented the way that the Davies episodes always went for bombast and explosions over meaningful character moments, and I think I became really aware of that problem after watching the Matt Smith era before going back to do a run of the previous season and specials. Davies would have his Doctor go loud, go big, sacrificing emotion and earned character beats simply so the show could go bigger. Moffat's run on the show was all about character, front and center, and that's the kind of writing I like.

That isn't to say that Moffat's run on the show is perfect, although I do think this first season is probably the best of the three season run for Smith's Doctor. Moffat (and writing partner Mark Gattis) loves what many would call "puzzle box" writing; there's a setup to some great mystery with the rest of the season then exploring what that mystery meant. He'd done that kind of writing for a number of projects -- Jekyll in 2007, Sherlock in 2010, Dracula in 2020, along with a number of episodes he wrote for Doctor Who during the Davies era -- and when it worked it really fired. Unfortunately, very often it didn't work, at least not all the way to the finale. 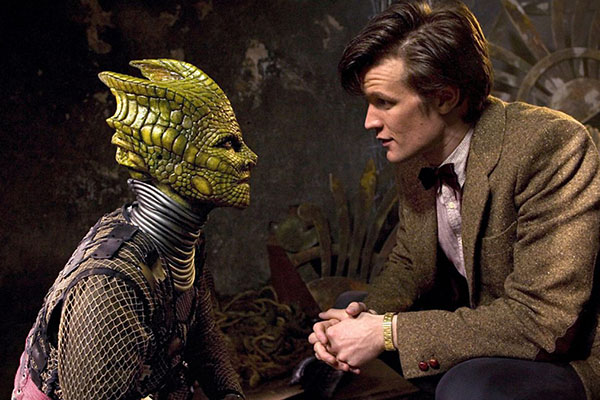 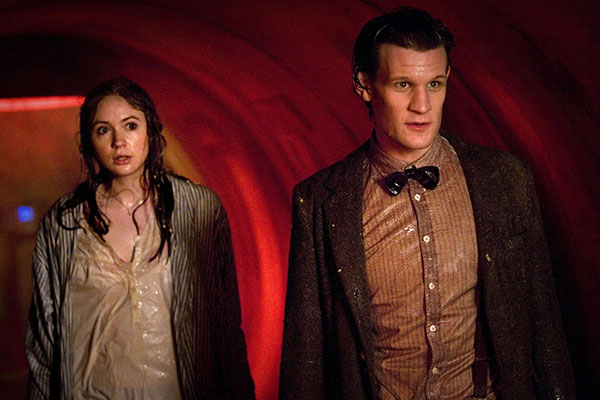 The problem with puzzle box writing is that whatever is in the puzzle box has to be a prize worthy of opening the box. The act of exploration for a story promises that the end result will be worth the journey. Later seasons of Moffat's run (along with Jekyll and Dracula and many, many parts of Sherlock) came up with great setups, and even had fantastic middle sections, but the endings would fall out and betray the work that came before. It's not so bad in this first series under Moffat's control but we'll see the wheels begin to come off, in their own way, down the road.

One amusing thing about calling Moffat's writing style as "puzzle box" in nature is that this first season of his tenure features a literal puzzle box: the Pandorica, a trap set specifically for the Doctor to suck him in and capture him. It's set by all his enemies because they all fear he will end the universe which, in a way, he does... but he also saves it, as is his way. And to do that he had to solve the mystery of the cracks in the wall of the bedroom of a little girl, cracks that resonated throughout the rest of the universe. That little girl was Amelia Pond and, as an adult (played by Karen Gillan), she'd become arguably the best companion the show had ever seen.

With Amy Pond the series setup a clean break from the love stories of eras past. Yes, Donna Noble wasn't in love with the Doctor but she still had to deal with other companions that were. Here, though, Amy has her own guy, Rory (Arthur Darvill), who she's set to marry (whenever her adventure on the TARDIS gets her back home) and (outside of one spicy attempt to jump the Doctor's bones which he squashes quite quickly, and that can be explained away by cold feet on her part) she has a purely platonic relationship with the Doctor. This actually allows them to develop a deep friendship, each of them, Doctor and Amy, calling the other their best friend. These two are equals even more than Tennant's Doctor and Donna, and that level of friendship and camaraderie makes the show so watchable.

It helps, of course, that Gillan was just a step away from being a bona fide movie star (going on to star as Nebula in the Marvel Cinematic UniverseWhen it first began in 2008 with a little film called Iron Man no one suspected the empire that would follow. Superhero movies in the past, especially those not featuring either Batman or Superman, were usually terrible. And yet, Iron Man would lead to a long series of successful films, launching the most successful cinema brand in history: the Marvel Cinematic Universe.). She has such charisma, such talent on display that she absolutely acts like an equal to the Doctor. Where previous seasons made it clear that the Doctor was the focus, that he was in control even has the companions came along for the ride, Amy was a true equal to the Doctor, a proper explorer and adventurer in her own right who was at home in the TARDIS as her traveling companion. Hell, she calls the Doctor and Rory her boys, as if to imply that they were her companions, not the other way around. 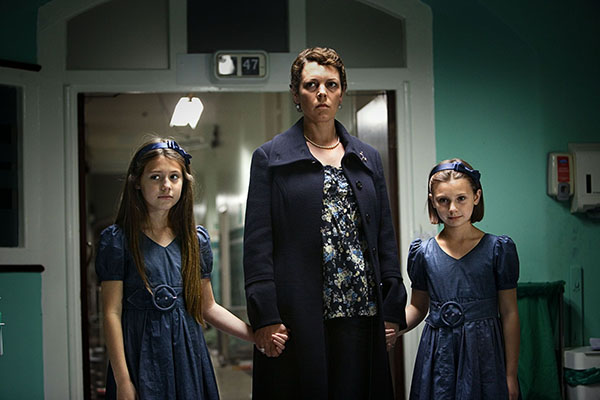 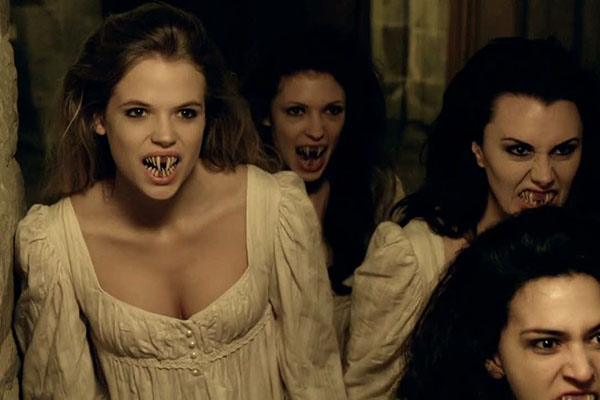 Really, everything about this first season of the show works so well. It's light and comedic, with just the right balance of adventure, a touch of horror (the Weeping Angels do make a return), and a bit of that bombast that is built into the DNA of the show. But where the previous seasons would focus on the big moments, the CGI and the explosions, Series 5 knew what to come back to with a finale that focused on four characters: the Doctor, Amy, Rory, and River Song. The very last episode is focused fully on the characters of the series and not just a series of bigger moments to out-do what came before.

Ah yes, and we should discuss River Song. Moffat's creation from the David Tennant era, River returns here which is quite a feat as she died in her first appearance. But then she a time traveler as well so she and the Doctor meet at different points in each of their lives. River seemed interesting in her first appearance but the couple of additional appearances she makes here, in this fifth series, imply the deeper story between them and help to flesh out the long history they are meant to have / already have had will have had in the future for them both from the past. This season (and the next) really enjoy playing with time travel to create new stories for the show.

This is probably the most consistently enjoyable season of the relaunched show and it's all thanks to everyone involved. This is Doctor Who firing on all cylinders and showing what it could really do and its absolutely amazing.

The Best Episode of Series 5

I like the self-contained episodes with tw3isty storytelling and interesting conceits, and in that regard "The Lodger" really works. The Doctor runs into trouble with the TARDIS and when he takes a step outside to investigate the ship whooshes off without him, Amy trapped inside. He ends up finding lodging at the apartment of Craig Owens (James Corden), and that apartment is in the building where some really weird timey-wimey shenanigans are happening. To fix time, and save the TARDIS, the Doctor and Craig have to work together while, also, bonding and fixing Craig's life in the process. It's a lot of fun.

The Worst Episode of Series 5

This is practically a tie as I think the two weakest episodes of this season are the ones that actually explore real, historical characters: Winston Churchill in "Victory of the Daleks" and Vincent van Gogh in "Vincent and the Doctor". But of the two I think "Victory of the Daleks" is worse because it loses sight of the characters. In the episode the Daleks return but they're seemingly also invented by a scientist during World War II. That, of course, ends up being a ruse and it leads to a big, climactic confrontation between the Dalek mothership and a bunch of retrofitted WW2 planes flying around in space that feels like a climax ripped out of the Davies era. This episode doesn't really do much for the Doctor or Amy and, worst of all, Churchill is barely a factor in his own episode. It's just not a good adventure at all.