I am not generally much for musicals, animated or otherwise. Disney, of course, has made mad bank over the years releasing countless animated musicals; one could say their entire brand is built on their animated musicals and that everything else they've been able to buy (Marvel Cinematic UniverseWhen it first began in 2008 with a little film called Iron Man no one suspected the empire that would follow. Superhero movies in the past, especially those not featuring either Batman or Superman, were usually terrible. And yet, Iron Man would lead to a long series of successful films, launching the most successful cinema brand in history: the Marvel Cinematic Universe. and Star WarsThe modern blockbuster: it's a concept so commonplace now we don't even think about the fact that before the end of the 1970s, this kind of movie -- huge spectacles, big action, massive budgets -- wasn't really made. That all changed, though, with Star Wars, a series of films that were big on spectacle (and even bigger on profits). A hero's journey set against a sci-fi backdrop, nothing like this series had ever really been done before, and then Hollywood was never the same. included) is thanks to the power of the Disney PrincessesReleased in 1937, Disney's Snow White was a gamble for the company: the first fully-animated, feature-length film ever created. It's success lead to the eventual creation of the Disney Princess franchise, which has spawned 13 main-line films and multiple spin-off movies and shows.. This is the house, in short, that Snow White built. 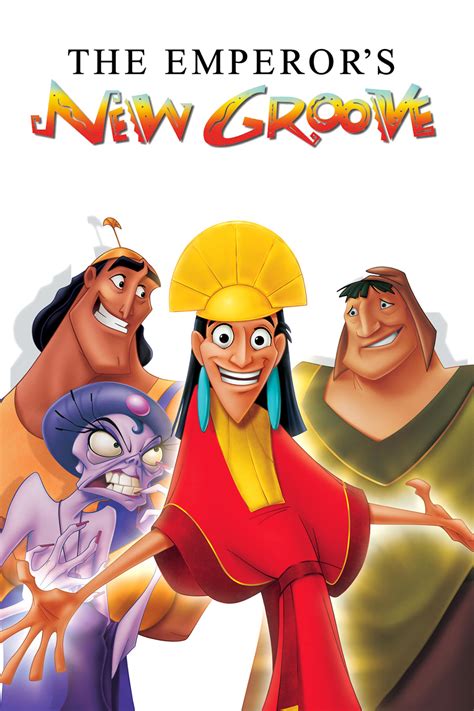 Not every Disney animated feature is a musical. Heck, not every Disney movie has been successful, either, and those two facts came together, sadly, in 2000's The Emperor's New Groove. Originally conceived as a sweeping epic titles Kingdom of the Sun, this was going to be a king of "Prince and the Pauper" story about switch identities, romance, and, yes, a greedy emperor turned into a llama. It also went over budget, suffered during test screenings, and generally wasn't up to Disney's standards during the production phase, so much of the work was scrapped and the film restarted in a different direction. A much more comedic direction.

As finally released, The Emperor's New Groove tells the tale of Emperor Kuzco (David Spade), a spoiled and venal young ruler who isn't so much beloved by his people as ignored when he can be and acknowledged whenever he's in their presence. Kuzco calls up the village leader Pacha (John Goodman) to have a frank talk about the hillside Pacha (and the rest of his town) live on. It seems Kuzco is going to build a new vacation home and the hill that entire village is on is the perfect location. Sorry for the village but it's got to go. You know how it is.

Getting in the way of Kuzco's luxurious plans are Yzma (Eartha Kitt) and her man-servant Kronk (Patrick Warburton). Kuzco fires Yzma when she gets a little too greedy with her own power, so in response Yzma tries to poison the Emperor. Instead of poison, though, she feeds him "essence of llama" which turns the king into the woolly mammal. Yzma instructs Kronk to kill the llama, but he has a moment of weakness and, instead, the llama ends up on the wagon of Pacha as the chieftain heads home. Once Kuzco's current state is discovered, though, Pacha and the Emperor team up to get the ruler back home, and transformed, so that the day can be saved (and, in the process, perhaps the village doesn't have to move after all).

The factors working against The Emperor's New Groove are, frankly, numerous, but the biggest, certainly, was the fact that this wasn't the kind of movie Disney Animation Studios had become known for. The occasional non-musical notwithstanding (the Rescuers films, for example, The Black Cauldron, and The Great Mouse Detective, the latter two of which were not rousing successes), most of Disney's biggest movies were animated musicals. Coming out of the "Disney Renaissance", from The Little Mermaid through to Tarzan, just about every movie released during that time was a musical (Tarzan being the exception, and even that still had a full soundtrack by Phil Collins). 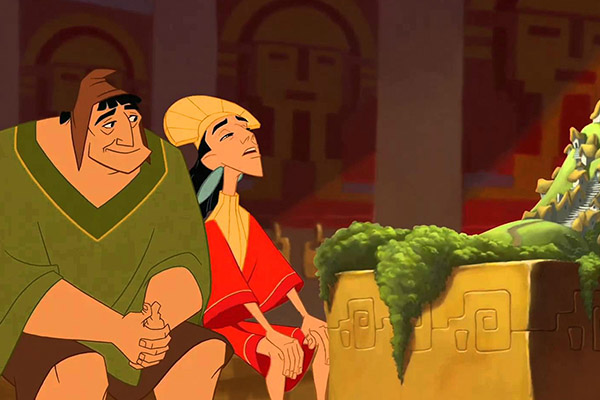 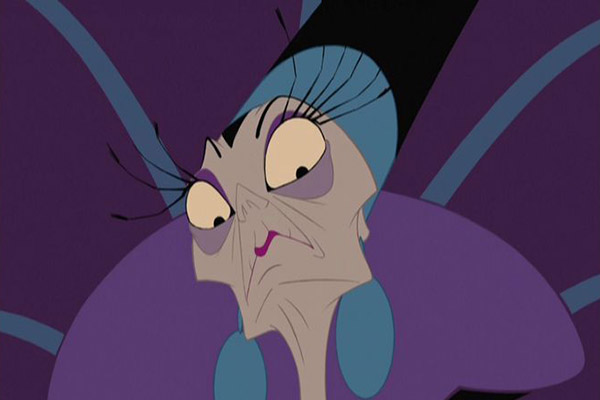 The Emperor's New Groove, though, was not a musical at all. It had one number that could even be considered a true musical performance, the opening song-and-montage "Perfect World" as performed by Tom Jones, while the rest of it just has backing score. While it was fun watching Kuzco dance during this number (establishing said "New Groove"), this is the exception in a film that tries very, very hard to defy everything Disney Animation had come to make over the previous couple of decades.

Where the previous movies were romantic, with a lead princess is most respects (and even, in the case of Tarzan, a strong male/female romance), this movie was a buddy-comedy with nary a love interest in sight for Kuzco (the love interest original written when the film was Kingdom of the Sun was excised entirely).The story here isn't about someone learning to find themselves and see the love in front of them like, well, in every Disney movie, really, but instead to just learn to be a better person instead of a total shit-heel.

Really Kuzco, voices by David Spade, feels like what would happen if instead of making the comedic relief a side character for our stoic lead (Genie to Aladdin, Mushu to Mulan, the Gargoyles and the Hunchback, the Satyr and Hercules) that character was given a lead role. I know this irritated some people (if for no reason than because it was David Spade), but I like it. Kuzco is refreshing; a shit-heel, yes, but funny and charming in his own way, and the movie has a great time using him as both hero and heel throughout its runtime.

But then, a lot of why that all works is because this film isn't at all serious about itself. It's more in line with the classic animation from the studios in the 1940s and 1950s -- very broad, very silly, and willing to go anywhere for a joke. It's ostensibly set in the Incan Empire, but it makes any number of anachronistic references, throwing whatever jokes it can against a wall just to see what sticks (and most of it does). Even better, outside of Kuzco Riverdancing at the start of the film (which, Irish step-dancing is still a thing and has been for centuries, I assume), the films eschews and pop-culture references that could quickly become dated (something even Aladdin didn't avoid). 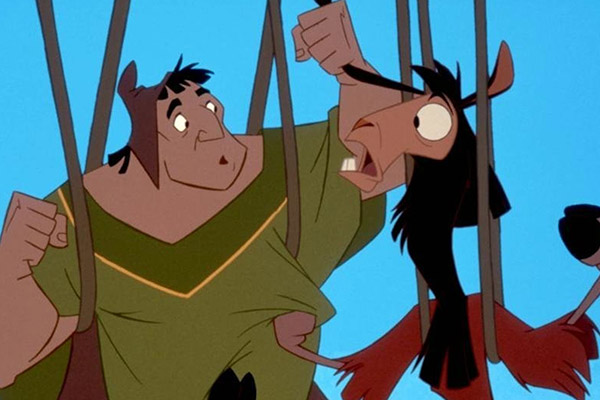 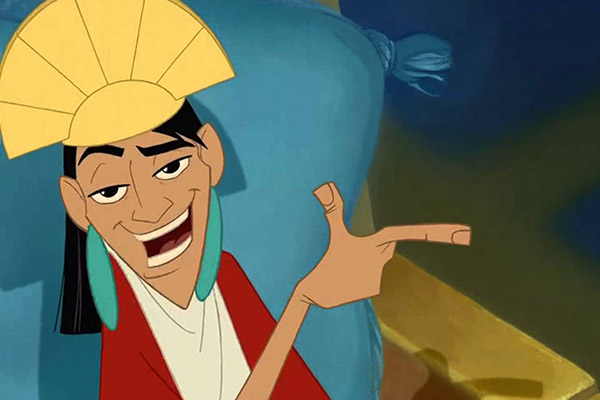 It's not a perfect movie, nowhere near as sweeping or epic as its kin from the Disney Renaissance. The fact that Disney hoped this would be as big as any of those movies was silly, it had a $100 Mil budget and only made $167 Mil at the Box Office. But then, if this had been budgeted like films in its actual genre -- buddy comedies -- its returns seem reasonable. This is a silly, broad, and funny comedy, not a sweeping and rousing musical. Disney just had the wrong expectations for the movie it eventually cranked out.

This film was a relative failure at the Box Office, but it's in its long tail at home that the film finally found its audience and truly got to shine. Disney even realized this, eventually, giving the film a direct-to-video sequel, Kronk's New Groove, and television series that takes place after as well, The Emperor's New School. Not a bad legacy for a movie that never found itself upon initial release.

Personally, while I know people like the big sweeping musicals, this is the film I go back to every few years. It has the right kind of tone for me -- sarcastic, amusing, with jokes that don't really get old -- allowing the film to stand the test of time in a way many other films of the era fail to manage. Disney has its hits, but it's in this little comedy that the studio ended up with a film that had true staying power.