You know a character I never thought would need more character development? Damien Wayne. His appearances in the DC Animated Movie UniverseWhile DC Comics was amping up production on this big "MCU-killer", the DC Extended Universe they were also quietly putting together another shared movie continuity, the DC Animated Movie Universe. This series was more closely related to the comics, directly adapting a number of famous storylines to, arguably, better effect than the live-action movies could. BatmanOne of the longest running, consistently in-print superheroes ever (matched only by Superman and Wonder Woman), Batman has been a force in entertainment for nearly as long as there's been an entertainment industry. It only makes sense, then that he is also the most regularly adapted, and consistently successful, superhero to grace the Silver Screen. flicks have basically established everything about his character we needed to know: raised by his grandfather, Ras Al Ghul, and trained as an ultimate killing machine, Damien is a cold, distant jerk who prefers to work alone, failing to see the value in team works or, really, anyone else at all. He's a complete character even if he's not a very nice one. 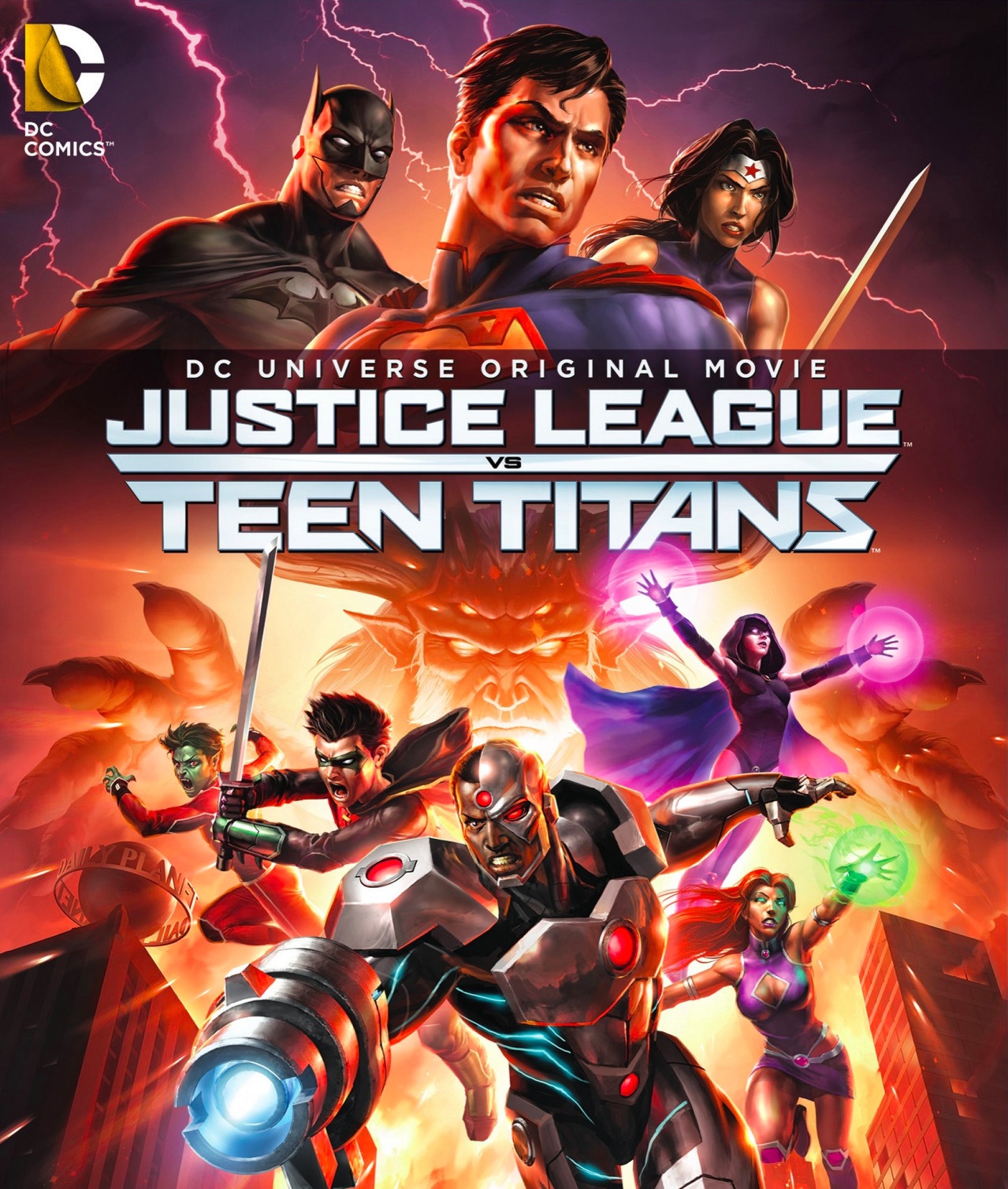 That said, the DCAMU takes the wise tack of actually forcing Damien into a group setting: the Teen Titans. Although the Justice League get top billing on this piece, the movie is really a Teen Titans film and, honestly, it's mostly the Damien Wayne show. "Damien Wayne and Company" would be a more accurate title for the film, and yet that's also it's best strength; the film takes the complete, if unlikeable character, and finds a way to give him further character development by shoving him in a situation he absolutely abhors.

But before we get to the Teen Titans bits we first have to get through the requisite Justice League portion first. We open with a battle between the League and the Legion of Doom, a collection of each of our heroes biggest archenemies. During the ensuing battle (which, eventually, the League) decisively wins, Weather Wizard (a Flash villain with tech that allows him to control the weather) gets taken over by a shadowy demon. He lashes out against the League with all his now-vastly-more considerable might, giving the League quite the fight. Damien/Robin has the idea to engage all the Bat-plane's weapons and launch the whole thing, ship and all, at Weather Wizard. Batman forbids this action, but Damien does it anyway, knocking Weather Wizard down and freeing him from the demon. Batman, though, isn't please at all.

Deciding that Damien needs to learn to work as a part of a team, Batman ships him on to Titans Tower where he's to become a part of the Teen Titans, a kind of mini-Justice League. Also at the town are Blue Beetle (a kid with a cybernetic suit), Beast Boy (who can turn into any creature in the animal kingdom), and Raven (a dark sorceress), along with their teacher/mentor Starfire (an alien with powerful cosmic abilities). Damien is initially abrasive and rude, as is his way, but when the shadow demons return he learns he has to work with his newfound team. Otherwise the whole world will be destroyed by Raven's evil, demonic father, Trigon.

When it came out, Justice League vs. Teen Titans gave us the third major TV/movie rendition of the core kiddo group. By this point the basic players were all known and expected -- Robin, Starfire, Raven, Beast Boy, and Cyborg -- and all those characters show up (Cyborg as part of the League), making this movie feel like a natural extension of the teams we already knew. Sure, in both the 2003 Teen Titans and then again in Teen Titans Go! Robin was the (de facto) leader (and probably Dick Grayson although I'm not sure either show explicitly said who he was), whereas here Starfire leads the team (and gets to say "Titans, Go!"). Yet, despite this, this whole team setup should feel familiar to young and old, something fun and easy to get into without having to question who all these new characters are. 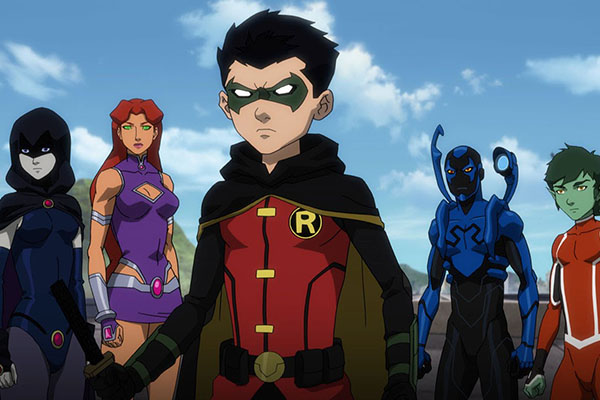 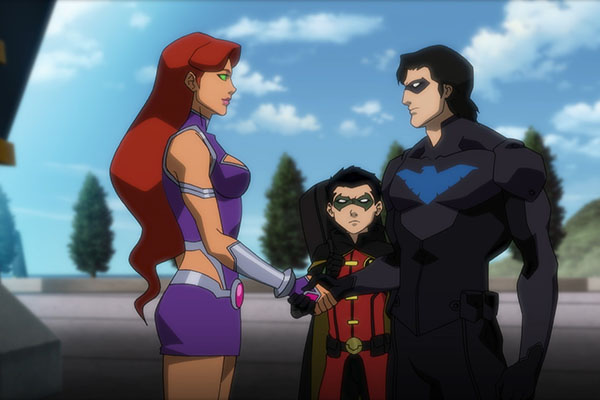 In fact, the only really new character introduced is Blue Beetle and he's become such a big part of the recent DC Universe (one of the more successful reboot characters in the continuity) that his inclusion here was a no brainer. A version of his character also features prominently on Young Justice, a show that's basically Teen Titans in all but name, so plenty of people should already know him. His character looks, acts, and functions a lot like his Young Justice counterpart, which is both a blessing and a curse for him. It's easy to appreciate the character since we already know who his is, sure, but it also limits his character development. Heck, he barely has any character development this time around, which is a touch sad.

But then there are a lot of characters that have appeared in previous movies in the DCAMU that don't get much growth in this film. Batman mostly sits on the sidelines and acts surly (which he does quite well), ceding all his time over to Robin. Nightwing, too, appears here but only for a couple of cameo appearances. Even Beast Boy, a new character to this universe introduced in this movie, doesn't get much in the way of growth in development. We get to learn who his is, see him act cocky, but he has little in the way of background shading or actually plot development. Most characters in the film are, essentially, props to keep the action going.

It's no joke that this movie is the Damien Wayne show, although maybe it's more accurate to say "Damien and Raven". Damien gets the largest chunk of character development, learning to like and trust other people and finding with the group a kind of family, something he didn't even really get from his father, Batman. Meanwhile, Raven acts as the catalyst for the plot. As in other versions of her story, Raven is the daughter of Trigon and a human woman -- on each world Trigon conquers he first sires a child so that they can act as his harbinger and key, allowing him access fully to the new planet. That was to be Raven's job but instead of allowing him to take over the world she found a way to seal him in his hell dimension inside a crystal. Somehow, though, Trigon found a way to escape and, via his demon spawns, attempts once again to use Raven to open his passage to Earth. And, of course, team bonding ensues.

The two leads get plenty of time, and character development, in the film. It is understandable while the film has to downplay other characters to give these two full arcs -- there's only so much time in one of these DCAMU movies (each of which are about 90 minutes long) so certain characters have to be the focus. When the films have spent time giving each and every character equal time (Justice League: War, Batman: Bad Blood) the results have been a touch lackluster. Giving us two specific characters to focus on provides a solid through-line for the story and allows us to track actual character growth. We can bond with these two and, since they bond with the rest of their team, we enjoy all the characters across the board more. 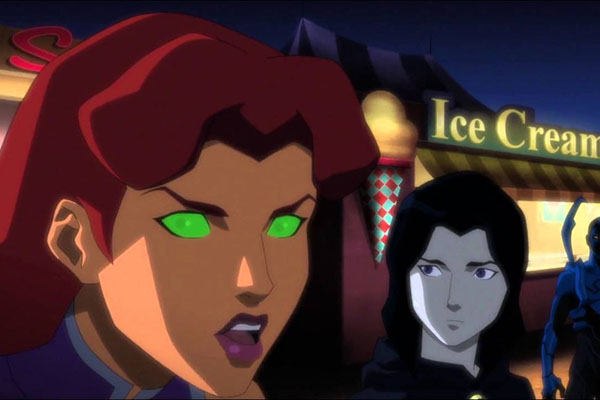 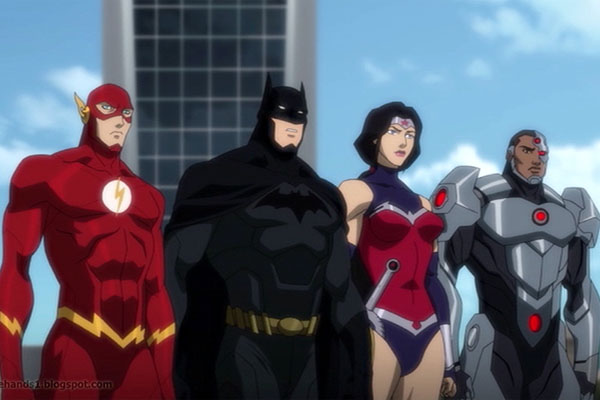 If anyone is really short-changed by film's length and focus it's Trigon. He's supposed to be this mega-bad ultra demon but he barely appears in much of the film. When he finally does arrive on Earth it's right around the point our heroes, the Titans, head to the hell dimension to retrieve the crystal. While the Justice League fights Trigon on the side, the real focus is on the Titans meaning that our big bad, the guy we're supposed to be actively root against, isn't even the focus of the action. Hell, despite the Titans being the power players in this film they never even have a direct confrontation with Trigon. Our villain is rendered into a sideline also-ran.

And yet, despite that, I found myself really enjoying this film and it's all because of Damien and Raven. These two are such great, well-written characters that I enjoyed all the time I got to spend with the team. The film might say "Justice League vs. Teen Titans" but it really wants us to care about Damien and Raven and it's better for it. By paring back the characters we really have to focus on and giving us two specifically to latch on to this film ends up having the best story of the DCAMU yet.

So, despite my misgivings, I guess we really did need a movie focused on Damien Wayne. I wonder what other side characters are due for this kind of treatment. Who out there wants to see a Condiment King movie?