Time to Defeat the Shadow Boss (Who's That?)

When it comes to sequels it's hard to find more of an oddball title than Battletoads & Double Dragon: The Ultimate Team. While both series were, in essence, beat-em-up titles, each had a different enough style of play that you wouldn't expect the two games to ever crossover. the Double Dragons meeting the 'Toads would be like, well, the Power Rangers meeting the Teenage Mutant Ninja TurtlesOriginally dreamed up as a parody of Marvel's Daredevil comics (going so far as to basically reproduce to opening shots of that comic's hero gaining his powers), the Teenage Mutant Ninja Turtles not only launched a sudden boom of anthropomorphic fighting animal comics but have, themselves, starred in multiple comics series, TV shows, and movies.. You can see kind of how we got to this but you really have to shut your brain off when it comes to think about what this does to the story of both franchises. Okay, sure, the BattletoadsRare's mutants with attitude came out in a massive popular, and very difficult, first game, which also marked the high point for the series. pretty much could do whatever they wanted and it made sense, but what are the Double Dragons doing here, really? 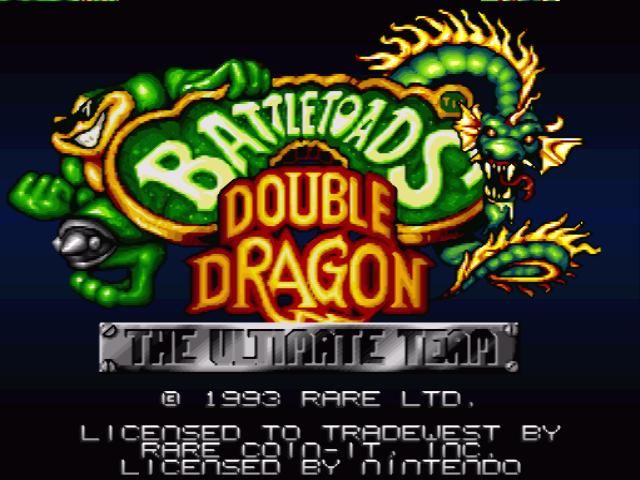 Although Battletoads & Double Dragon sets itself up as a series extension of both franchises, realistically the game is a straight up Battletoads sequel (which helps to paper over many of the odd decisions made here). While the Dragon Boys really shouldn't taking a high-flying adventure out into space, this is just another day in the office for the 'Toads and, in that regard, the game works. Also helping the title is the fact that this is the freshest and most original title in the series since the first entry. As far as sequels go, the 'Toads could do (and have done) a lot worse than Battletoads & Double Dragon.

The setup for the game is that the Evil Queen teamed up with the Shadow Boss (the supposed villain of the Double Dragon series, at least in the cartoon anyway) and the two have plans to attack the Earth... or something. Plot really doesn't matter in a Battletoads game (or, for that matter, a Double Dragon game), but since all the villains were working together, all our heroes, 'Toads and Dragons, also banded together to fight the good fight against this evil force.

As this is both a 'Toads and a Dragons game, Battletoads & Double Dragon has the most expansive roster of fighters of any game in either franchise. All three 'Toads are here (Zitt, Pimple, and Rash) along with both Dragon boys (Billy and Jimmy), and the two sets of characters do play slightly differently. The 'Toads, naturally, have their vary cartoonish fighting moves (their "Smash" attacks) while the Dragons fight more in their own martial arts style. Functionally, though, all the fighters work about the same and you can flit back and forth between the two sets of characters and not feel like you're missing too much or that there's much of a learning curve. Hit buttons, punch things, move on is the order of the day.

As this is primarily a Battletoads game (it was developed by 'Toads company Rare) much of the game play follows the usual formula for the series. The first stage of the game is a standard battle arena level, which is then followed by a stage with some fighting that then gives way to a play on the Turbo Tunnel. This then leads to a classic climb stage as the heroes descend through towers via ropes. There's then more fighting, a new shuttle battle, and even more fighting. It has all the elements you'd expect from the 'Toads, making another standard (but fun) adventure. 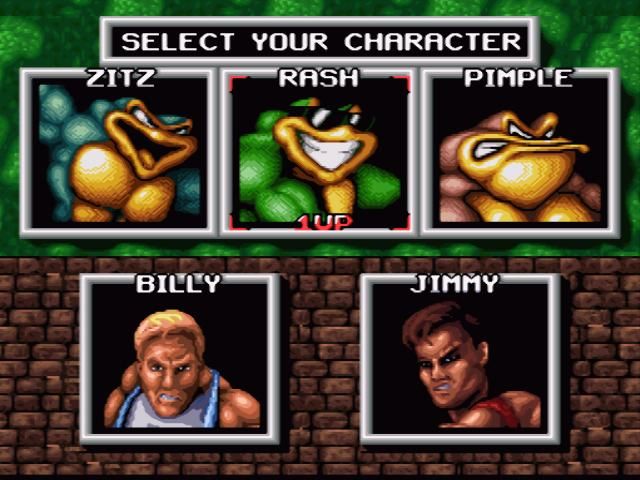 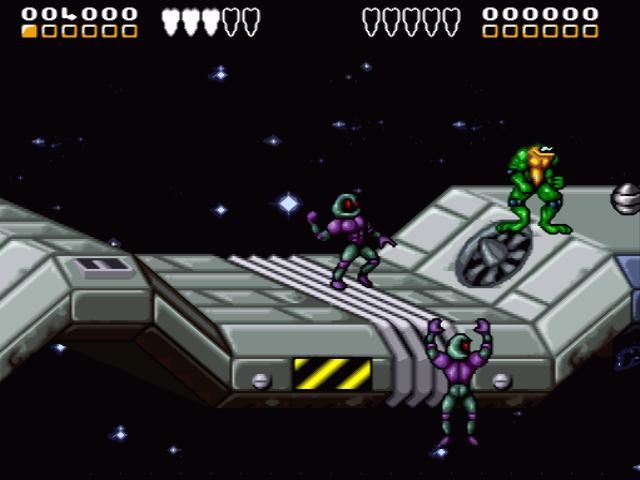 That said, there are some bits in the game that feel like they were borrowed from the Double Dragons games. There is slightly more emphasis on platforming than on strange stages and weird vehicles. Some of the sections even included climbing and scaling surfaces, elements directly inspired by the early NES entries in the Double Dragon series. The game also leans heavily on the Dragons' side of enemy selection, with Abobo, Williams, and Ropers all being present in the game (not the mention the Shadow Boss himself in his first video game appearance).

Considering the game's crossover appeal you can also tell there were some concessions made for the Double Dragon fans. While Battletoads plays know the crushing difficulty of the franchise all too well, this game feels like the kindest entry in the series yet. The Turbo Tunnel section is downright manageable, even on a first attempt, and some of the later challenges feel like the developers got them to a "nice enough" level and didn't then push it to ridiculous degrees (like they had on previous games). Whether this was a conscious decision, or just the team not taking quite as much time to make this game as punishing as possible, the end result is a game that feels like it actually wants you to beat it... even if you have to earn it in the process.

Although built on the original Battletoads engine, this game does feel like it was stripped down some. While that first game was a long game (clocking in at easily an hour even if you hardly ever died and never had to continue, and much longer if you sucked at it) this crossover sequel clocks in at about half the length. In fairness, each of the early stages feel substantive and meaty, but the overall package is a bit shorter than I was honestly expecting. The game's length, along with the lowered challenge, likely made this an easy afternoon title for fans of the series and I'm not sure how much replay value they would have found in it.

What's most interesting to me, honestly, is that so much of this game seems to have influenced the next entry in the series, the Arcade Battletoads. Many elements of the game, from the dynamite throwing enemies to the space battle later in the game, all get retreads in that later entry, almost like Rare was working on porting this game over, then when the Double Dragon license left their hands they just moved stuff over to a different version. That's all supposition, mind you, but the idea seems pretty legit. That game feels like a carbon copy of this one, just with better graphics, showing where Rare felt the series needed to go, at a minimum. 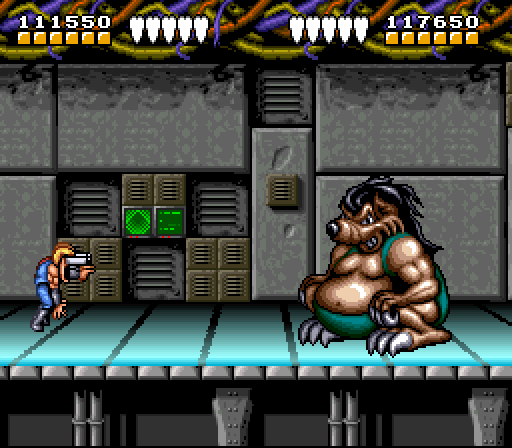 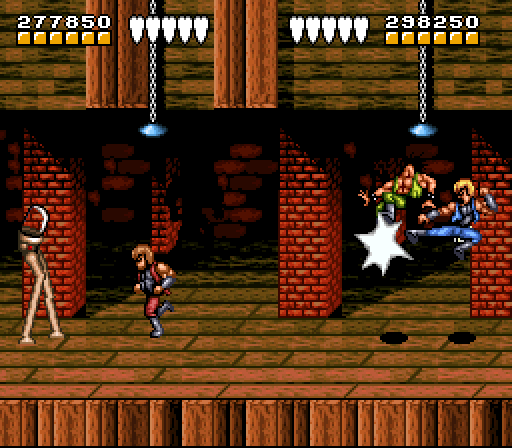 Whatever the case, while that later Arcade title bombed, this crossover entry did fairly well. Maybe not well enough to rate future sequels but solidly enough that the NES version was later ported to the Game Boy and then the Genesis and SNES. What's impressive is that each of the versions maintains all the core game play and stages (short of the Game Boy edition being single player only) making this the rare cross-platform, cross-generation title where any of the versions could be a solid buy. Yes, the SNES version had prettier graphics while the Genesis version had a few more songs, but no one edition was substantially better than another. Get any version and you got the full experience.

I don't think Battletoads & Double Dragon: The Ultimate Team is as good as the original NES 'Toads game. It's solid enough but shorter and some of the creativity and balls-out insanity of that first game is missing here. Still, of all the follow-ups to come in the franchise this crossover is certainly the first truly worthy successor to the original title. And when it comes to the Double Dragon side, this "Ultimate Team" is probably the best Dragons game since the second one (even if it hardly feels like a Dragons game at all). It's a good game and worthy of addition to any gamer's collection.