What genre does the BattletoadsRare's mutants with attitude came out in a massive popular, and very difficult, first game, which also marked the high point for the series. series actually fit into? It's a question I had to ask myself as I played through the Battletoads arcade game because, frankly, this really doesn't seem to have a clue as to what actually works in the franchise as whole. If you go back to the original Battletoads NES game, that title played like a parody of the Teenage Mutant Ninja TurtlesOriginally dreamed up as a parody of Marvel's Daredevil comics (going so far as to basically reproduce to opening shots of that comic's hero gaining his powers), the Teenage Mutant Ninja Turtles not only launched a sudden boom of anthropomorphic fighting animal comics but have, themselves, starred in multiple comics series, TV shows, and movies. series with a bunch of mutant toads battling through stage after stage of hazards all until they reached the end of their (incredibly difficult) game. Yes, it was ostensibly a beat-em-up but honestly it felt more like it was playing in the weird wading pool of the first Teenage Mutant Ninja Turtles NES game, a weird title that itself featured a number of non beat-em-up challenges. Rare just took that idea and ran with it to the nth degree. 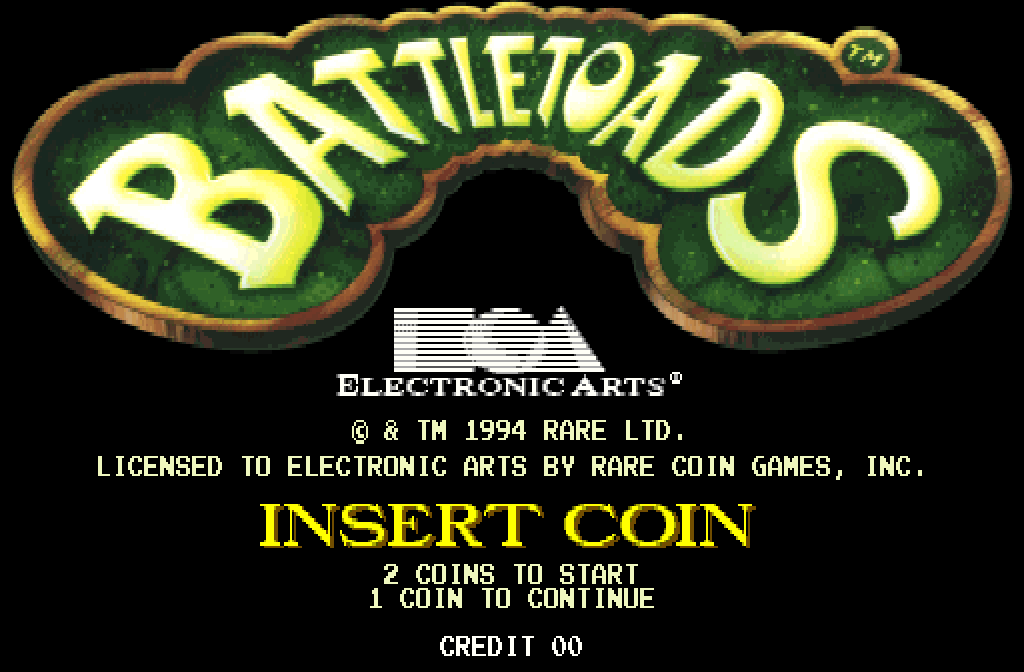 After that first 'Toads game the series had flirted back and forth with different ideas, trying to copy the core of what worked while finding a sweet spot between challenge and iteration. Very rarely (pun unintended) did Rare actually get it right, with only Battletoads & Double Dragon getting close to that sweet mix. Wat worked about the original game was it's variety, the idea that you never knew what was coming next but that each challenge would appear, stick around just long enough to kill you a few times, and then move on before it all became tedious. That's a hard balance to achieve and, honestly, the Battletoads arcade game fails spectacularly at getting anywhere near the NES game's brilliance.

If the original game was, essentially, a series of mini-game stages, each with their own challenge, just sometimes doted with little moments of beat-em-up fighting, Battletoads Arcade (as we'll take to calling it) is the exact opposite. It's a game with long stretches of fighting, going against the same mobs of enemies from one zone to the next, with only the occasional spot of interesting (and frustrating) challenges that marked this as a 'Toads game. The balance is, frankly, all wrong but worse, the game doesn't know when to let an idea go. Stages linger on and on, well past the poi9nt where they're fun. There's little variety to this game, but it does have a whole lot of tedium.

Playing like a mash-up of elements of Battletoads NES and Battletoads / Double Dragon, the game finds out reptilian heroes going through a ship in the Evil Queen's fleets, from the outside surface, through the inner decks, past an ice cave (for some reason), and then through the robotic warehouse before they blast their way out. Along the way they'll fight many, many enemies before the game ends. Oh, and they'll kill (straight up murder) a whole lot of dudes in the process.

When I think of he 'Toads I don't generally think of their beat-em-up prowess. Yes, the first game (and just about every game since, including this one) did open with a fighting stage, but very quickly it got to the meat of the matter: all the weird vehicles and stupid challenges the game threw at you. I fondly remember the games for their fighting because, by and large, the actual combat of the games is pretty rote. Sadly for the Arcade title, which doubles down on all the brawling, the fighting here is still pretty rote. You can punch and kick, jump kick, dash-tackle into enemies, and, well, that's about it. Considering the era it came out in, where even the TMNT games were moving into combos and special attacks, Battletoads Arcade feels pretty basic in comparison. It's just mindless button mashing until you get to the end of a stage. 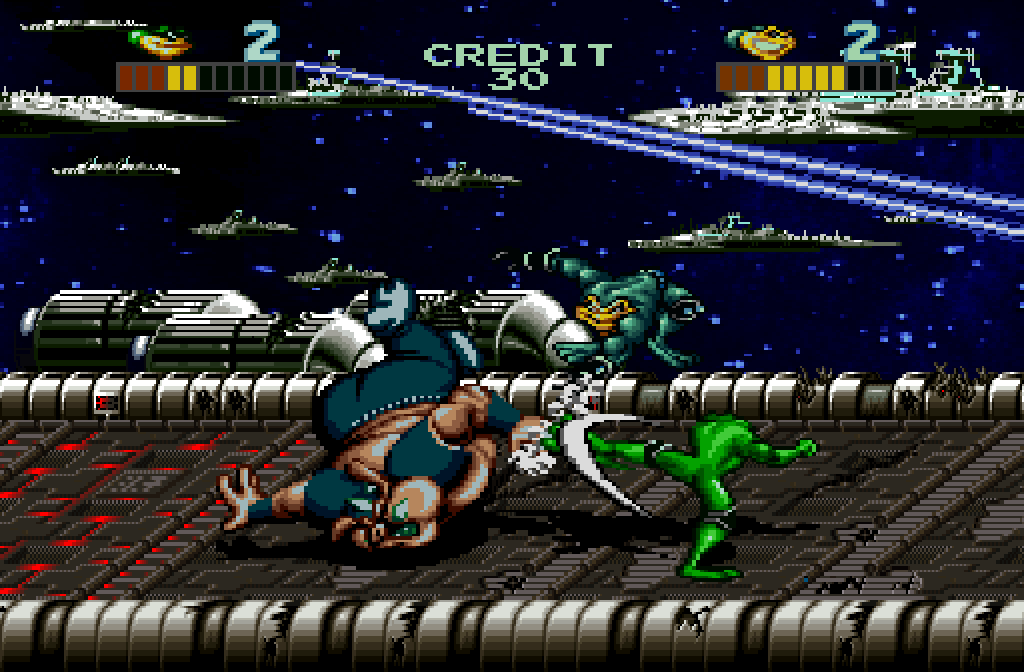 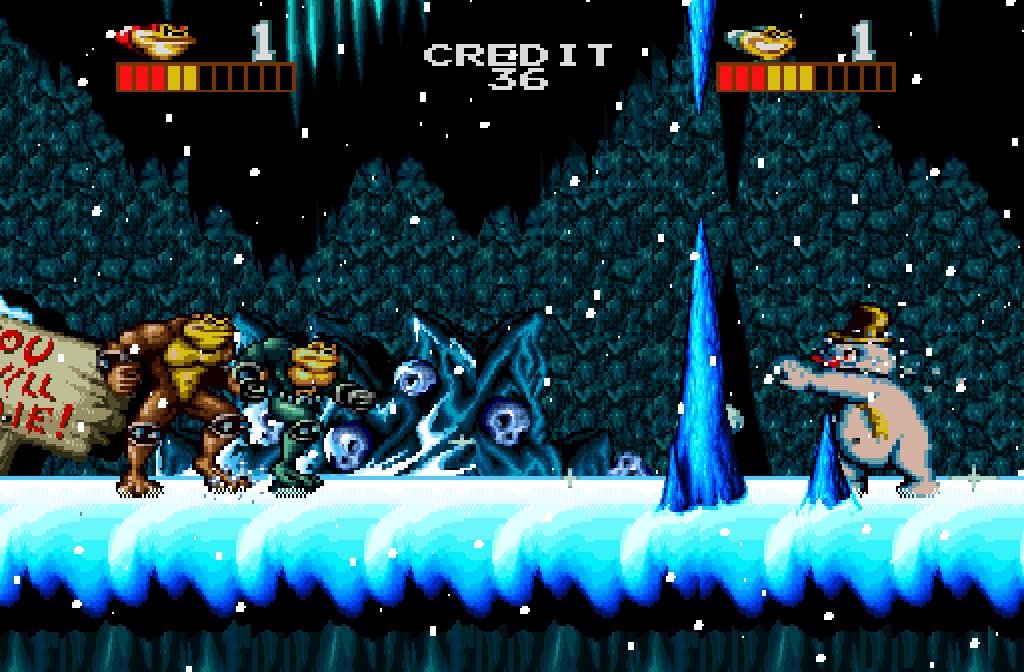 It takes about half the game's run time until you reach a stage that isn't all mindless fighting: a new iteration on the classic tower descent. This one plays about like you expect, with all the usual challenges. It's not creatively new or different, mind you, but it is at least a change of pace. This is then followed by another fighting stage, but this one at least is broken up in two places by rooms where balls will roll into the foreground from a distances and the 'Toads have to dodge these combo attacks. This was a neat, new idea, and it felt very 'Toads. It's hard as nails, too, which was perfectly on brand.

This stage then leads into a shoot-em-up section that felt ripped right out of a ContraStarted by Konami in 1988 the run-n-gun platform series Contra was, for a time, one of the flagship franchises for the company. auto-scroller. The 'Toads ride a ship as it moves around, and they fire at anything that moves. Occasionally power-ups float on screen giving the 'Toads special weapons to use (for a limited time). Showing its Contra inspiration, the weapons are a spread shot, a lightning-laser, and a flame thrower. The stage is capped by a long, intensive boss fight across multiple phases. It's a pretty solid shooting section that maintains the expected 'Toads-level difficulty.

Challenge, in fact, isn't lacking in this title. While the main fighting sections are pretty brainless, the boss fights are stupidly hard. Maybe too hard, but then this is Battletoads so intense challenge should be part of the game. This game, in fact, is the first to feature bosses that can actually be a problem, a marked change for the series where it was the bosses that generally felt pretty rote. A number of the bosses are pretty creative and interesting, with multiple-phases to fight and challenging attacks to avoid. Of all the creative decisions in the game, it's the bosses I respect the most.

Despite this, though, the game can't shake the fact that it all feels very expected. Whatever isn't just stolen from the NES game, or the Double Dragon crossover is borrowed from Contra (or, in the case of one mini-game, Street Fighter). The rest of the time it's just linear fighting, on and on, with the same rats and muscular wolves populating the whole game. It's like Rare thought, "let's do an arcade game next," but didn't actually put much thought into plotting how that would actually work as a good game. 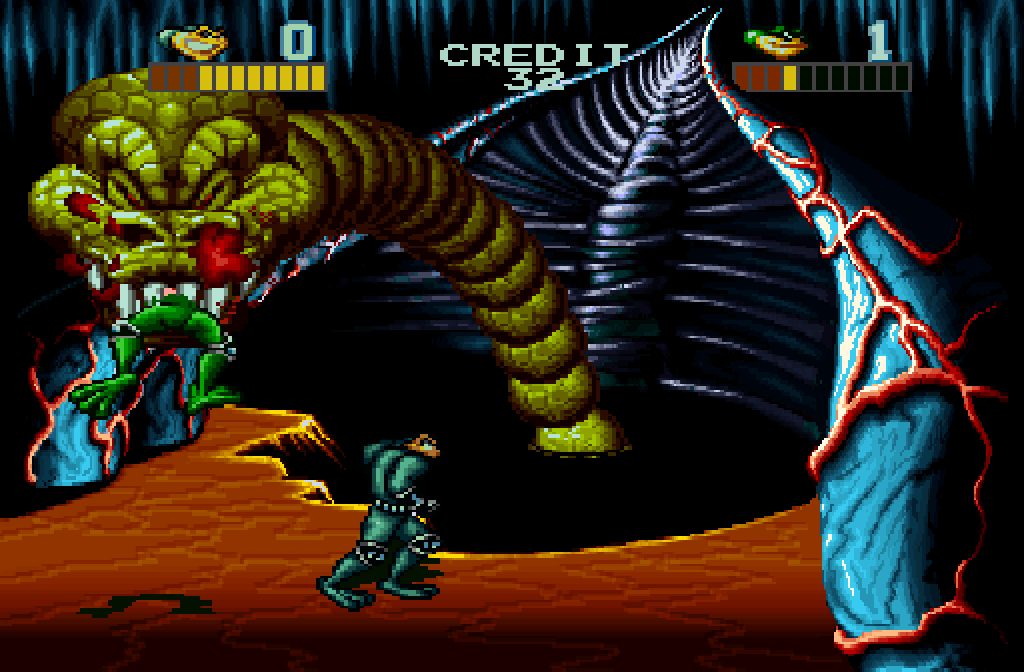 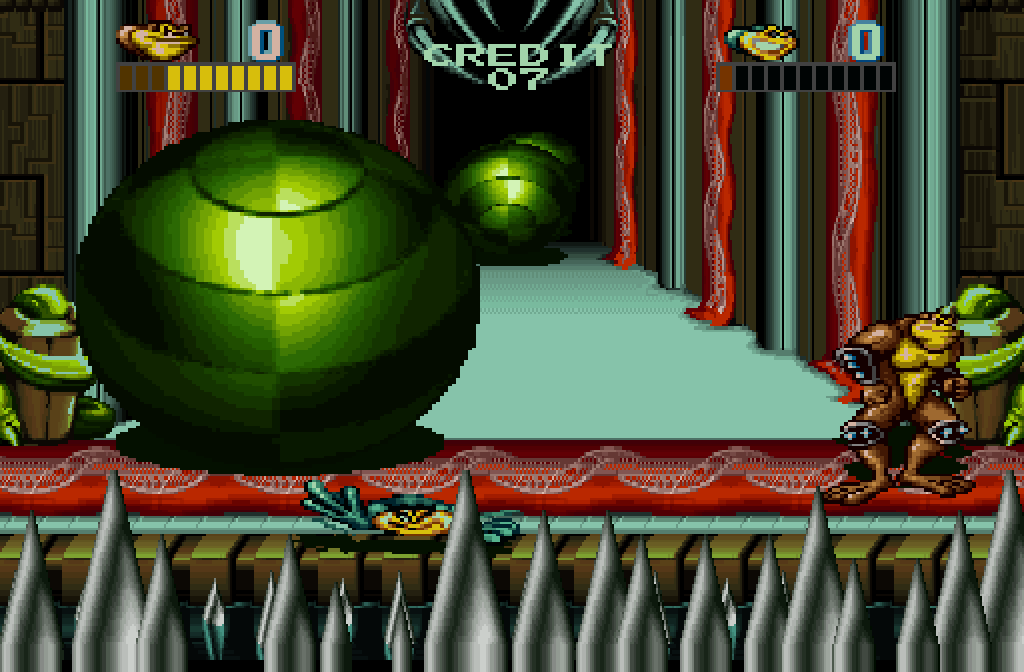 The only place that the game actually does try something new is in its over-the-top humor. This i the first game to feature blood and gore and, man, does it go in for it. The 'Toads come at enemies with their limbs turning into drills and saws as the blood flows. Bosses get beheaded, enemies turn to blood and bone, and it all had the aura of a game that's trying very hard to be "edgy". I'm not saying they can't do gore, or potty humor, or coarse language (and the game goes in on all three at times), but it's that when you do it you gotta do it well. Battletoads Arcade is just puerile, base level attempts at humor that even Family Guy and South Park would think was too immature (well, okay, maybe not Family Guy, not anymore).

I can respect the idea of what Rare wanted to do, broadening the scope of Battletoads into new markets. I can even respect the few new ideas they put in, especially the ones they did right. The mix in this game, though, is way off. It feels like a 'Toads game made by people that only had a passing familiarity with the heroes, forced to ten cobble together a game via edict from the corporate heads. Maybe that was the case, maybe not, but however it worked this game feels hollow and soulless. It has the heroes but none of the spirit that made the NES game such a classic.