As the story goes, when Technos was looking at bringing their fighting games over to the U.S. in 1987 they had the money to invest advertising in either Double Dragon II, the NES port of an already popular Arcade game, or River City Ransom, and they chose Double Dragon II, cementing is fan-base while leaving Ransom to sink or swim (it sank, gaining cult status over time as people realized it was a fantastic game). Whether this rumor is true or not it is true that Double Dragon II easily outsold River City Ransom, in no small part because it had the recognized name. It helps that it's a pretty solid NES game. 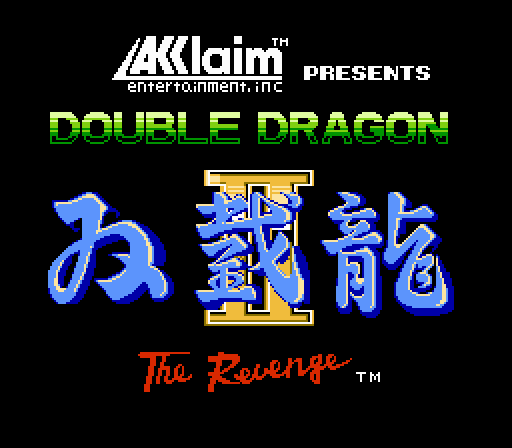 Originally conceived as an upgrade patch for the first Double Dragon arcade title, Double Dragon II eventually grew into its own game, needing expanded memory to do all the things the creators wanted, which then allowed them to rework a number of elements and expand the title out into its own game. This does allow the game to do more, to create a more expansive adventure with different locales and goons to fight. For fans of the Arcade title looking for a new adventure, this game seemingly provided all of that.

Thing is, if you know that this game started life as a simple upgrade for the original title you can kind of see where this game basically overlaps. In the Arcade the two games line up pretty similarly, with near identical structure to the opening set of stages and enemies that might look different but behave very similarly. There isn't a lot that's really all that new in the Arcade edition of Double Dragon II, but it does certainly look pretty.

The other thing this sequel has going for it over the original is that it is much smoother. The first game could easily get bogged down when too many characters were on screen, struggling even with just two characters. This was bad when you considered it was supposed to be a co-operative game with two heroes on screen at the same time. Double Dragon II improves this, reducing the amount of slow down to a bearable (although not always eliminated) level. it is an improvement in many respects.

That said, the game truly comes into its own on the NES. Like with the original, Technos took the opportunity to rework the game for Nintendo's console. While the original NES game followed the basic structure of its Arcade inspiration, adding in a mild RPG system of upgrades to keep things spicy, this NES sequel basically just looks at the Arcade sequel as inspiration and then makes a whole new game from the bones. The two games bear little similarity to each other outside of story and name, essentially makes this a port in name only. 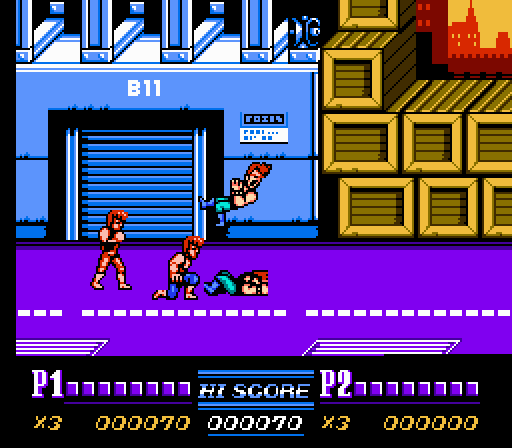 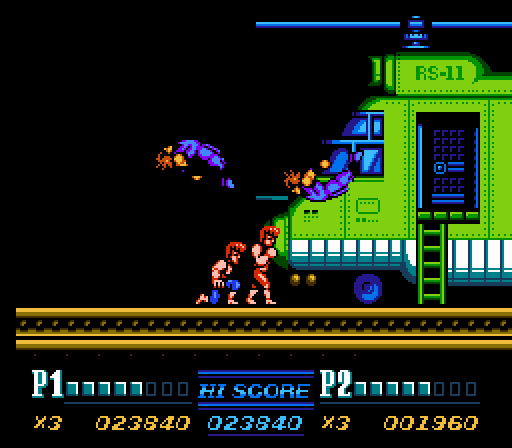 The first thing you'll notice when you get into Double Dragon II NES is that the levels are completely different. Although the music for the first couple of stages is the same (although the tracks aren't in the same order), the levels have been completely reworked. The stages features more variety, more challenges, and much more platforming. This last bit may not be a welcome addition for everyone as the platforming here is about as bad as it was in the first NES game in the series, but no one an argue that this game is clone of the Arcade title.

The other big change is that the move set in the game was completely reworked. Where the Arcade sequel had a move set for the brothers that closely matched the original title, this NES sequel reworks everything. Most of the moves are easier and more i9ntuitive to perform, giving a satisfying feel as the brothers unleash their kicks, punches, and spinning jump kicks. Its in th special moves that the characters really shine as this game introduces both a powerful flying uppercut and an even more powerful flying knee that can destroy enemies. This actually changes the balance of fights a fair bit, making many battles in this game easier than in the first title if you know the moves, but that just means you have more health and lives to try and get through the platforming, which is a boon.

That said, if what you want is a more faithful translation of the Arcade game to a home console, the Genesis edition of Double Dragon II hews closely to the Arcade layout. Here most of the game is exactly the same (although one chapter was greatly expanded) and the move set mirrors that of the Arcade. Sega, notably, didn't ask for their games to stand apart from other editions of the titles (where Nintendo basically required it), instead focusing on "Arcade faithful" experiences where possible.

For the purist the Genesis edition does provide a fairly nice game play experience. It's the Arcade game, in layout and scope. It's not a perfect translation, mind you, as the game play in general is notably slower. It has a more methodical pace, although the moments of slow down are greatly reduced over the Arcade sequel, meaning that while the game is somewhat slower it is at least consistent in its pace. Whether that's the experience you're looking for or not really depends on the player. But then, if you want to go further afield you could hit the ZX Spectrum or many PC ports or... naw, just choose between the NES or the Genesis. 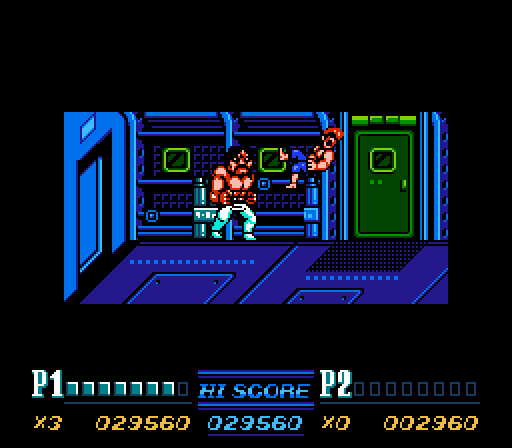 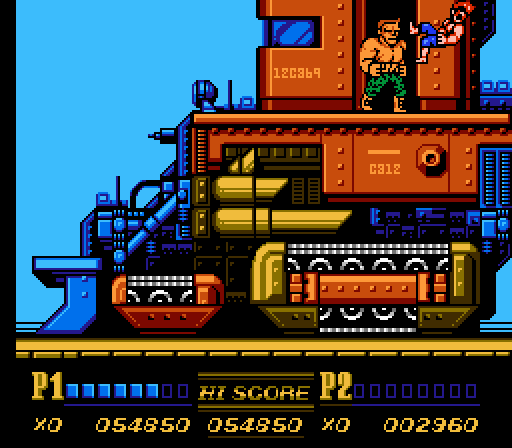 For my money the NES edition had the experience I was really looking for. While it's not "Arcade perfect" it is "better than", I think. It has a more varied adventure, more moves, and more going on to keep attention. It certainly struck a chord with the gaming public as this is the edition of Double Dragon II: The Revenge for most players. it had everything people wanted (including two-player co-op, the biggest improvement over the first NES entry) wrapped in a solid package. A true classic of the NES era (even if I like River City Ransom even more).

Side note: the Game Boy also had a game called Double Dragon II, but it is unrelated to this game. It's actually a port of a different Kunio-kun title, Nekketsu Tough Guy Kunio: The Further Brawls, and we'll cover it at another time.