Return of the Lack (of Anything Interesting) 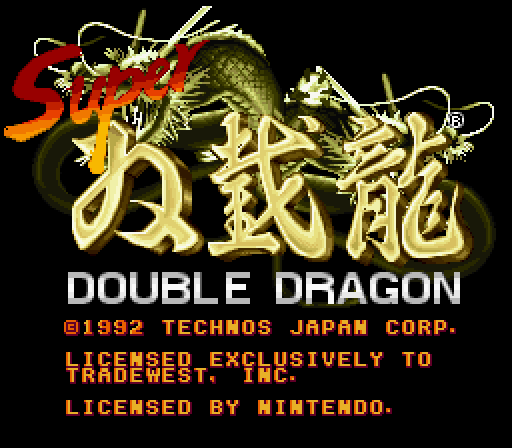 When you look at the game -- yet another brawler for the Lee Brothers from Technos -- you can understand what the influences were on this. While the first Double Dragon redefined the genre (building off Technos's own Renegade to create a sublime fighting experience), brawling games had evolved since then, powered by releases like Capcom's Final Fight and Sega's Streets of Rage. technos, suddenly, was playing catch-up in the very genre they'd created.

To the game's credit, it's not a complete disaster. It does look great, using he graphical power of the SNES to create a much prettier game. The background tiles are varied and the animations are smooth and lush (for the era). It's impressive to see the boys fighting with such smooth style in 16-bit graphics considering how many versions of the previous game sacrificed speed for graphical flair. The fighting is still slower than the really smooth, quick brawls of the NES games, but this is the first graphically updated game in the series I found played as smoothly as I expected.

I also appreciated that the game actually let the two Lee Brothers play (slightly) differently. The third game had to introduce new warriors to fight with the Lees to give us anyone with different fighting styles, but here, Jimmy and Billy have slightly different punches, very slightly changed move-sets that make them each feel slightly different. Sure, you're only going to notice this as the second player, who gets to control Jimmy, but it was a nice little touch.

And, thankfully the game ditches any kind of in-game stores or nods towards credits and micro-transactions. This was such a poorly executed idea in the third arcade game, and the faithful home ports didn't really have a way to implement it with any style or efficiency. While it would have been cool to see this fourth game evolve that idea and build something more akin to River City Ransom, the lack of in-game stores was the right move here. 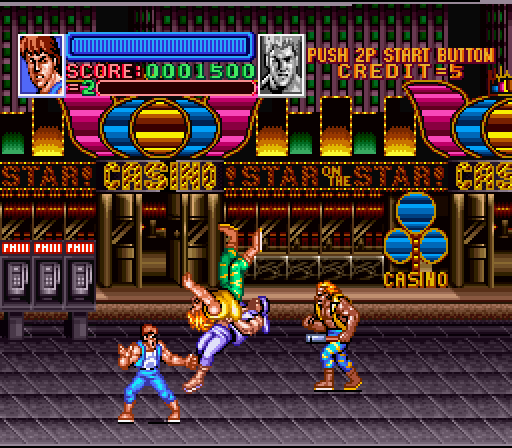 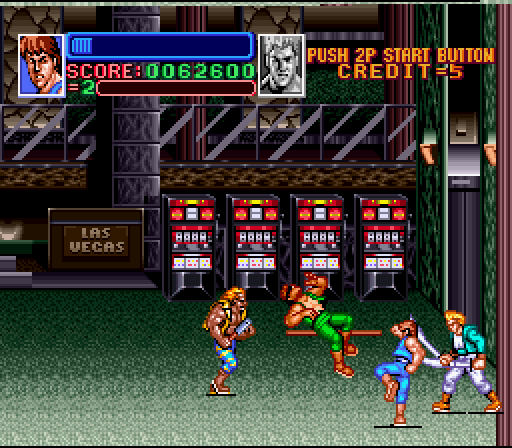 Sadly that's the best I can say for this game as everything else about it is utterly tedious. The game play itself is more of a chore. The game is probably twice the length of the previous entries, but all of that is padding. More waves of enemies, more long stages to walk across, but nothing that really adds anything to the game beyond just length. This is a long, but really boring, adventure.

The big issue is that the game features along exclusively long open hallways that the boys move along. Each stage is a hallway, then another hallway, and then another, and onwards. Sometimes the boys will walk up a staircase, or jump down a balcony, but these aren't done to add platforming to the game, it's simply to transition them to another long hallway. Every stages, despite different backgrounds, is basically the same, over and over.

Worse, these hallways have no variance. In previous games you'd climb some walls, or have some pits to avoid (and kick enemies into), but all of these minor platforming sections are missing until the last 15 minutes of the hour-long adventure (and even they they're half-heartedly used). Mostly its just waking and fighting, ad nauseam.

On top of that, this game has a paltry number of enemies to fight. You'll see them a lot, but over and over again as the same guys come at you in every single stage. Say what you will about the third game, but it at least featured new enemies in each stage. Here, though, it's just endless waves of Roper, Williams, and Baker, over and over again. I was so sick of fighting these guys by the third stage, and there were still four more stages to go from there. 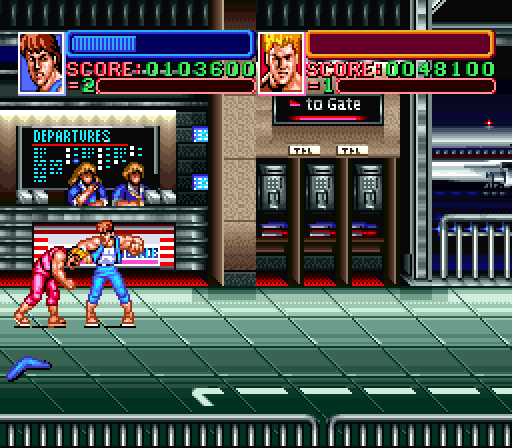 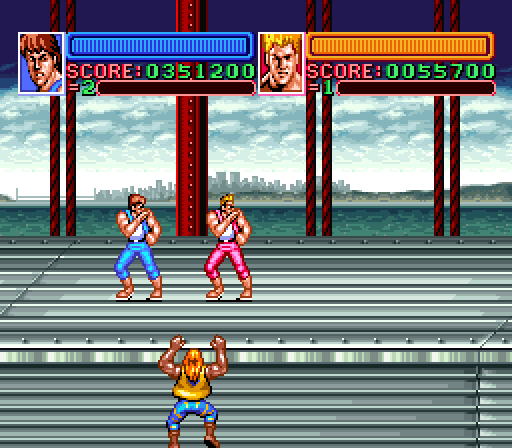 It doesn't help that the computer A.I. is criminally stupid. You can be surrounded by three guys but only one of them will attack you at a time. The other two enemies, no matter where they are, will simply stand there, waiting. It's actually funny since you can use this to your advantage, throwing dropped grenades on the ground and them positioning yourself just right so a waiting enemy will stand on it and explode. The bad guys make no attempt to avoid obstacles, they don't worry about your line of sight. They're just dumb robots that punch. It's bad.

There really isn't anything good about the game outside of its glossy coat of paint. Even the music betrays the 16-bit flourish of the system, with sad little tinny loops of music that will play over and over again in each stage. The cart had to have more room for enemies, for music, for everything you'd expect from a Double Dragon game, but none of the good stuff made it into here. This feels like a horribly lazy cash-grab from Technos to stretch the series out for another adventure and milk a few extra bucks off the name.

In no way does Super Double Dragon live up to the legacy of the series. This is a badly made, barely conceived entry that most fans probably wish didn't exist at all. And yet, even here, we haven't reached the low point of the series. Just wait for the next official numbered entry for that sadness...