A Descent Into Mediocrity

Taking a classic game series and moving it into the third dimension can be a difficult act to pull off. Although some games series are able to make that transition with aplomb (Super Mario 64 comes to mind) others struggle to find that right balance of classic game play with a new viewing angle to create something fun and playable. Many game series (Castlevania, Sonic, even Donkey KongCreated as the titular villainous ape for his first game, Donkey Kong, along with the whole Kong family, has gone on to have a ling and varied career in a variety of Nintendo games.) all struggled as they tried to make the jump (not everyone can be Super Mario SeriesHe's the world's most famous plumber and the biggest face in Nintendo's stable, a character so ubiquitous you already knew we were talking about Mario even before we said his name.). 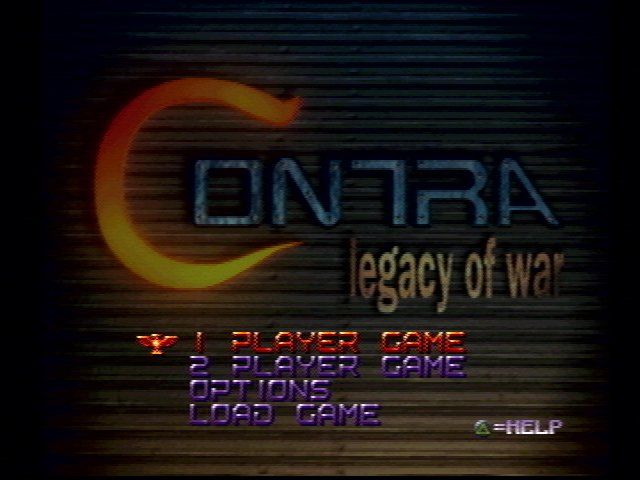 Castlevania is an interesting one to bring up as that was Konami's big swing at moving one of their hallowed classics to the third dimension. The resulting game, Castlevania 64, was ignored by fans and gamers alike. And the same results seem to befall another big transition for Konami with ContraStarted by Konami in 1988 the run-n-gun platform series Contra was, for a time, one of the flagship franchises for the company.. Here again we have the company trying desperately to move a series that came up in the classic, 2D era and bring it into the 3D genre like "fans" seemed to want. The results, though, we far from good.

There are any number of things we can point to for why the game failed, but I don't think it's the 3D on its own. Unlike Castlevania which was 2D through and through, Contra had flirted with pseudo-3D game play since its very first title. Over-the-shoulder fortress stages, overhead shooting stages, and all kinds of odd-ball attempts to making the shooting game play work from multiple dimensions had shown up in the series. If any franchise could maintain the classic feel while moving to a new dimension it seemed like Contra should be able to do it. And yet...

The first issue is the most obvious: the camera is locked in way too close to the action. Our heroes (a selection of four, from Ray to Tasha, Bubba the alien and CD the robot) explore a variety of stages as they blast their way from the outskirts of a city through a jungle and into the alien-infested fortress at the end game (like any classic entry in the series), but unlike with most games where you had a large field of view, the action here is cramped right around the heroes. They can generally only see a few feet in front of them, meaning they're constantly getting mobbed by guys they can't see (but the CPU can aim with all too much accuracy).

Moving the camera out would have helped this a lot as then the heroes would not only have room to breath but they'd also be able to anticipate what was coming and how. The number of times some random guy ran on screen, or a bullet come flying in from an enemy that I couldn't see (but they could see me), was more than I could count. Plus, to make matters worse, there's a chunky hub taking up the lower section of the screen, leaving even less real estate you could actually see (not that it stopped enemies from coming up from that direction). The camera really is the big problem here. 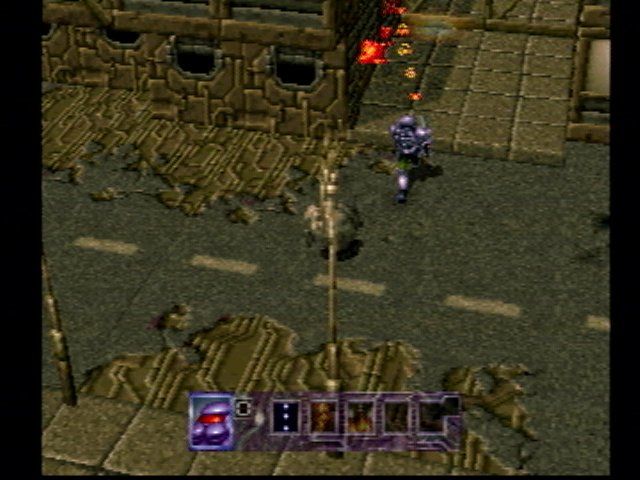 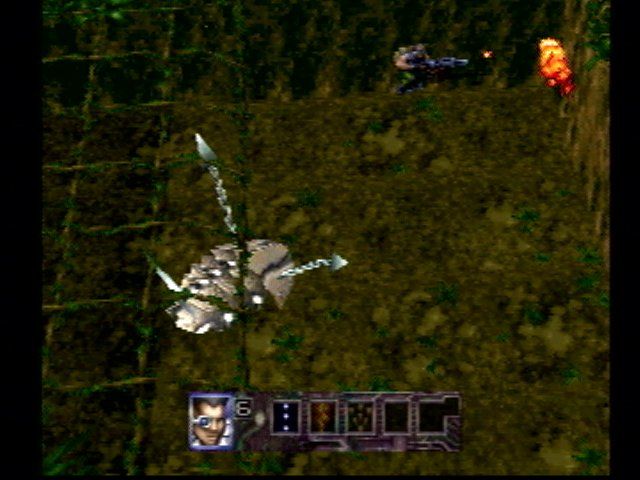 You can tell the developers knew there were some issues with the game as they tried to ratchet the game in different ways to make it somewhat easier to manage. Because there is so little screen to play with the number of enemies on screen is reduced greatly from other games. The number of bullets they can send flying around is also reduced, making this probably the least frenetic game in the series. On top of that, the heroes can crouch, and that crouch lowers them so all bullet pass over head. I found that as long as I wasn't in a section where enemies would just run at me I could lay down on the ground and basically avoid all attacks. Which was good because trying to kill the enemies any other way was a pain in the ass.

Bear in mind this game came out before analog controls were the standard. That means this game only supports basic 8-way shooting via the D-pad. Trying to kill guys from every direction (and then some) when you can only aim in eight directions is a giant pain. If I didn't lay down all the time, slowly spinning my gun around, I'd get tagged constantly. My frustration levels would rise as I battled the bad camera, the few stray guys coming in, and my own bad game play. It's a terrible combination.

On top of that, the game just looks terrible. As an early 3D era title the game suffers from the standard chunky polygons and horribly pixelated textures. Admittedly at the time this game came out it did get generally solid reviews for the way it looked, but the title hasn't aged at all well t all in the looks department. I doubt anyone would have considered it a real looker back in the days (competent, sure), but it's straight out ugly now. I think the designers tried but they were behind the 8-ball here with what they could do on the PSX hardware (or the Saturn, too, if you got that version of the game instead). I doubt it would have been any better on the N64, had the game come out on it there. Design wise, it just needed a real rethink.

Honestly, the biggest issue I can see with this game is just that it doesn't feel necessary. When you look at the true classics of the 3D era, the ones that people come back to again and again despite their age (like Super Mario 64), those are games that managed to find a way to use the 3D to do something truly new. Mario running around in 3D isn't enough on its own, but Nintendo then gave him new goals, new kinds of worlds, and a whole expansive style that helped the game transcend its chunky graphics. It wasn't as pretty as SNES era games, but the low polys were in service of something new and special and different. 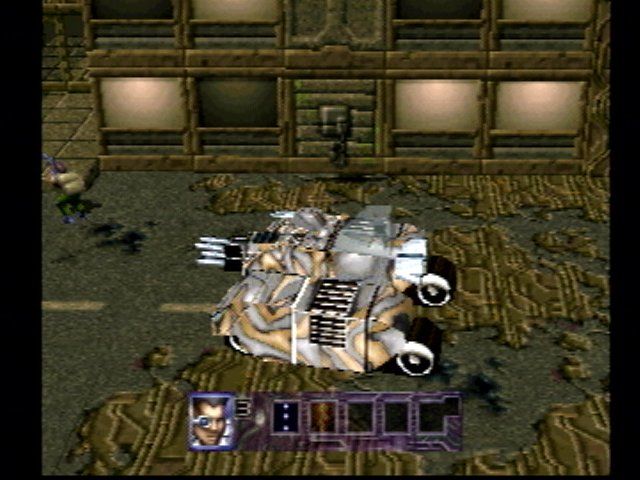 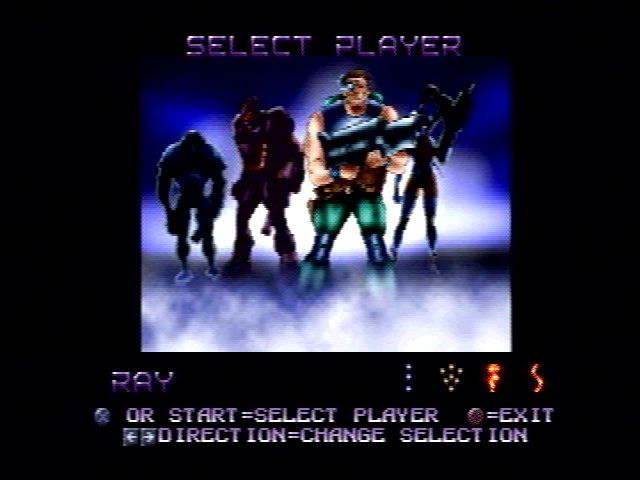 What's new and special about Contra: Legacy of War? Nothing, in fact. It's another Contra game, one that struggles to balance the classic game play on new hardware and a new graphical style. It loses the luster of the classic pixel graphics while still just barely maintaining the standard game play Rarely does the game find anything new to say or a better way to tell its game (only the last boss, a gunfight on a rolling orb, does anything to truly warrant 3D graphics, and you have to play through the rest of the terrible game to get there), largely just delivering more of the same (only worse).

Contra: Legacy of War is a slow, ponderous, frustrating, badly designed game. You can kind of see the core of what the team wanted to make (the bones of a sequel to Contra: Hard Corps lurks deep in here) but he end result doesn't rise to whatever lofty goals the design team had. This is a poorly executed game that really needed a lot more time in the hopper to even approach "decent", let alone rise to the status of the previous classics in this hallowed franchise. When people talk about Contra they really talk about the 2D games from the 8-bit and 16-bit eras. Legacy of War is the perfect illustration of why this is the case.