We've gone over a few of the entries in the Contra series already, from Arcade and NES smash Contra to it's fairly same-y sequel Super Contra and it's fun-on-the-go but not boundary pushing Operation C (simply titled Contra in Japan). Right now it's pretty clear that the Contra series is about two things: running-and-gunning and delivering that exact experience, over and over again, as many times as it works. 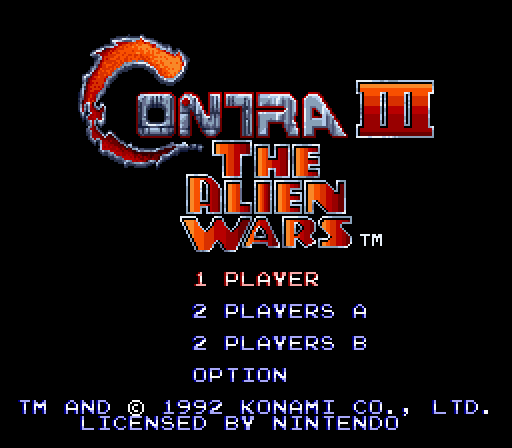 I understand how the series evolved like this. To be Contra you need to provide muscle-bound army dudes and put guns in their hands so they can mow down limitless waves of goons. That's the whole of the formula and, frankly, Konami had one hit after another for the series so the consensus, I'm sure, is "it's not broke so we won't fix it." That's great if all you want is the same Contra experience again and again. At a certain point your series has to evolve so what better time to do that than with the shift of home console generations? The series was primed to jump to the SNES and make its mark doing new things and pushing the series forward. Did it succeed? Well, yes and no.

Honestly, I think Contra III: The Alien Wars (the first game in the series designed for 16-bit home consoles) does a disservice to itself in the early game. The first stage feels like a rote rehash of the first stages of previous titles, while the second stage is an absolute mess. This second area features an overhead perspective and tasks the players with traversing this map, rotating it via Mode 7, to find specific targets and kill them, all before a boss then lands on the arena for you to fight. While the first stage is basic Contra, through and through, the second zone is an absolute mess to play, with hard to parse controls and bad hit detection. I hated playing though this overhead level and, sadly, there's two of them in the game.

The game gets more interesting from the third stage onwards (barring the fifth stage's overhead zone). Stage three is a vertical tower that tasks you with defeating multiple bosses, one after another, in something of a gauntlet. This is then followed by stage four, which is a masterpiece of design. Here you start off on a bike, taking out guys at high speed, before you end up fighting a ship in mid-air, clinging to missiles as you blast away. It's a tense and pulse pounded experience that shows what Konami could do when it just let loose. Then the sixth stage is a solid set of alien busting as you take out the alien threat once and for all. Certainly the back two-thirds of the game far out-strips the front section.

The Alien Wars does feature a number of improvements that help to make the game feel a little different from what came before. You can automatically start your game with up to 7 lives, still a far cry from the Konami code 30 of the first game but a welcome number of lives as this game is, as expected, difficult. You're also able to now have two weapons available, freely switching between both (and you only lose the "active" weapon when you die), giving you a solid load-out to work with from stage to stage. 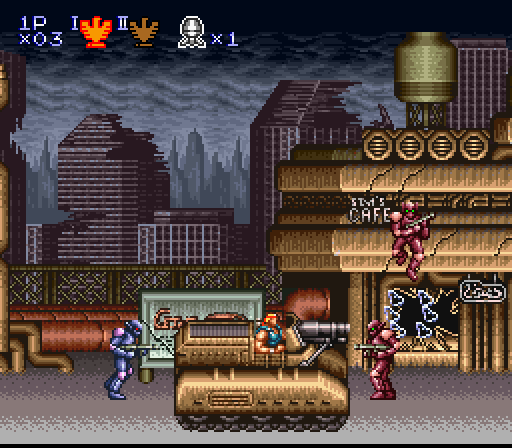 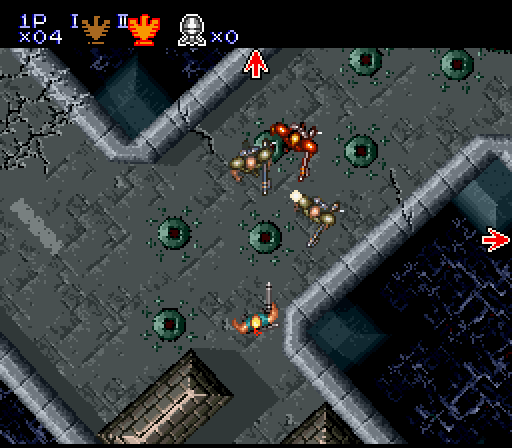 And, yes, the latter level design gets to be pretty incredible. The opening sections of the game absolutely feel like a tech demo -- "look, we can have stuff fly in from the back of the screen, we can put everything on fire, we can give you a spinning overhead view!" -- all things they could show on the back of the box to make the game look "cutting edge". But it's when the designers get past those required features and can just explore what the hardware is capable of that the game really gets interesting.

The single most important addition to the game is that our heroes can now grab hold of (specific) walls and ceilings and scale them. This allows for some pretty creative level design and boss fights. The tower forces you to scale a long wall, dodging the legs and bullets from a spider boss. And that missile section is a true show-stopper, a level that says, "this isn't your basic Contra anymore." Moments like this show promise for the future of the franchise, the ability to continue iterating and creating new and devious levels that could keep the series humming along for years. It's also a not-entirely fulfilled promise (as we'll get to later in the franchise), but that hope is still alive in this game.

The game does feel at war with itself, though, mind you. The great levels are balanced out by some real ho-hum sections that either feel like standard Contra, without any need to evolve, or absolutely awful overhead areas. It's easy to see why this game was a hit -- it takes all the things that worked about Contra from the solid shooting to the tight controls and did it all again -- but I can also understand why this "pinnacle" of the franchise was also it's death knell. The series had to try and figure out how to evolve from here and, arguably, it never quite managed that. This game pulls at itself in two directions and then the rest of the series nearly tears itself apart completely.

Still, the good parts of his game were enough to make it a hit, one with a pretty long tail. The game did well enough to warrant two different ports. The first was for the classic Game Boy titled Contra: The Alien Wars and, frankly, is a pretty credible port. Sure, the SNES flourishes couldn't make the transition so a number of animations that used SNES trickery are pared down to more basic Game Boy style effects. In one case this does work to the ports benefit as the Mode 7 overhead stages are now much more controllable locked-overhead stages. Sadly the dual weapon selection was removed from the game, and was the absolutely brilliant missile stage, making this feel like a decent port that's missing something. 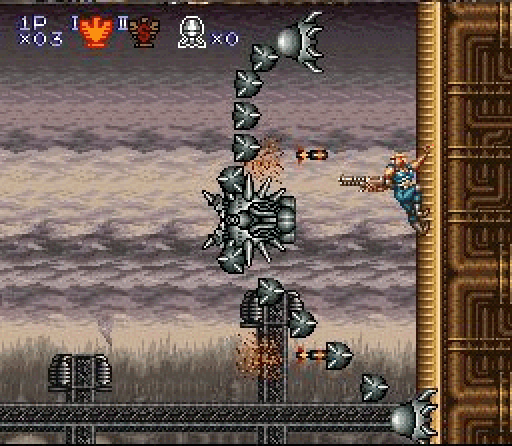 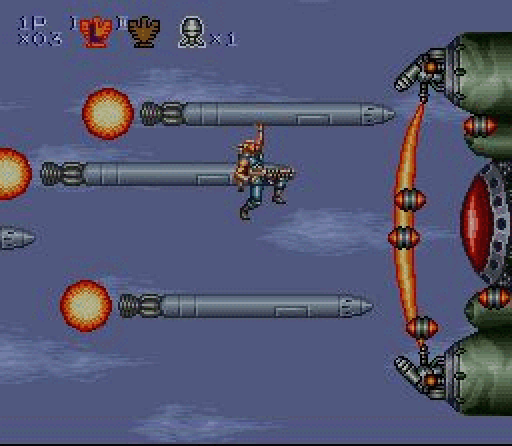 The Game Boy port was still better than the one made for the Game Boy Advance, Contra Advance: The Alien Wars EX. Despite it's name this is not an expanded port of Contra III but, instead, a hobbled humculus of better games and ideas. While the Mode 7 portions ere removed, those stages were swapped out for levels from Contra Hard Corps., a game with a very different vibe. Plus the port lacks the second weapons slot and additional weaponry that made this game feel so solid. It's the kind of port where you simply wonder what Konami was thinking. I'd rather have the Game Boy version than this mess.

With Contra III: The Alien Wars Konami proved that the series could be viable on 16-bit consoles. They also proved another point, though: the formula had gone just about as far as it could go. The next games would have to evolve to formula more to keep the series from getting stale (which it was already trending towards). This led to the Sega Genesis Hard Corps. (which is pretty stellar) and the NES Contra Force (which isn't). And then there's Gunstar Heroes, made by Alien Wars director Nobuya Nakazato for Treasure and that title shows the true promise of where this series could go...